Dry at last! Our first pleasant day out on the line for ages. When the sun shone (sometimes) it was agreeably warm, although dark, menacing clouds always seemed to hover in the background. 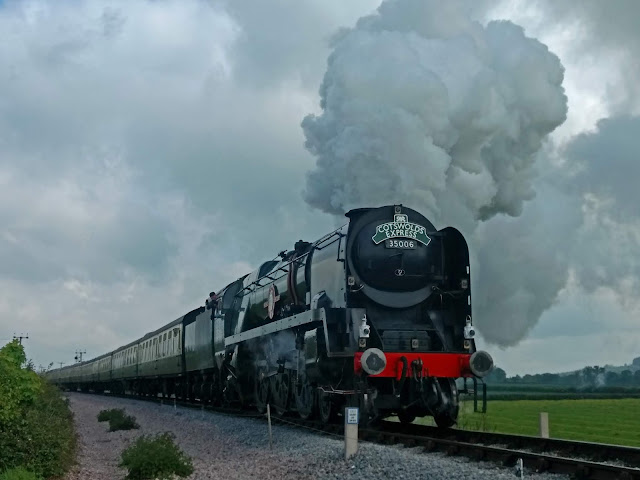 In this picture of P&O pulling out of Toddington you can see the clouds, and at this early point in the day it was still very chilly.

Notice that the gang is being photographed from the cab. Well, it's mutual. Here is our effort ! Better than two grubby old Landrovers and a bunch of guys shuffling their feet. The first job is to set up the TSR (temporary speed restriction) signs. It means heaving two heavy concrete blocks into the Landie now, every time we go out. Why can't they be made of Polystyrene, we ask? 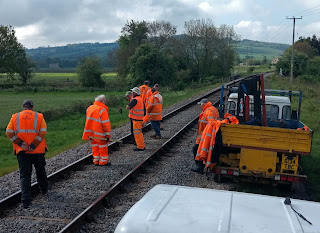 Then we have to wait for permission to work on the track. This is under new arrangements, and it slows down our productivity a lot. 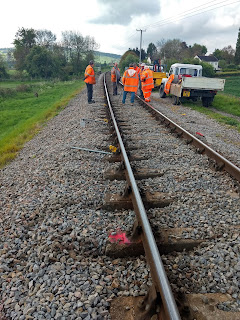 Finally the gang is unleashed. We are at Didbrook here, between the two bridges (handily called Didbrook 1 and, yes you've guessed it, Didbrook 2.)

Did you know there is a little stream running through Didbrook? It's called The Did. Ah, hence the name....

To kick off, we establish the area of sleepers that need to be dug free. We are addressing a twist here, a drop in the Cotswolds side rail that occurs with annoying regularity. We suspect that the cause is the absence of the usual ditch at the foot of the embankment there. Drainage is key for a good quality railway track.

Red marks the start of the dip. 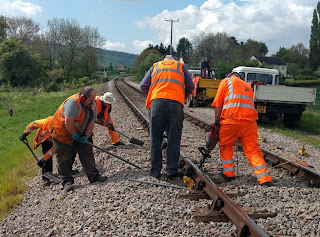 Once the 4 pan jacks have been eyed in Neil and Bert Ferrule start packing the voids under the sleepers (about an inch here) with electric Kango hammers. We Kango-ed a lot today. 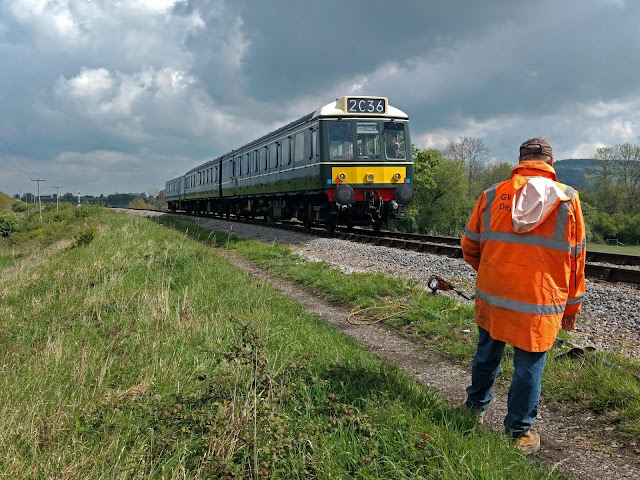 The next train to visit us at Didbrook here was the DMU, now limited to 10mph thanks to our TSR. 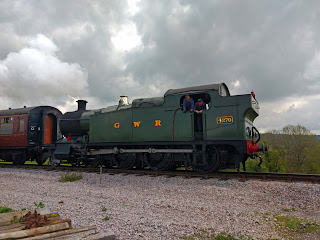 We Kango-ed away for quite a time, doing about 20 sleepers in a row to remove the dip. It's slow work and the Kango hammers are heavy.

The second steamer then chugged by. We had to explain to a visitor at Broadway the day before what the difference was between 'Steam1' and 'Steam2' on the timetable. It seems perfectly logical to us that work here, but of course we are used to it and to outsiders this railway stuff is all very mysterious. 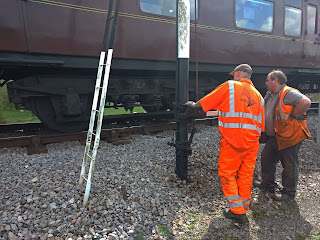 After completing the twist we took a look at this joint by the signal (the same train is just passing from left to right). We didn't much like what we saw and decided to give it some attention after lunch, which would give us the opportunity to get new ferrules and a set of bullhead, lifting, insulated fishplates. Yes, bullhead, lifting, insulated fishplates, we just take these off the shelf, don't we? And make sure the lift is of the correct height too, an eighth, not just a sixteenth. 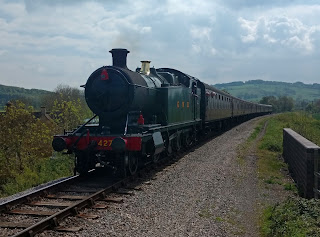 We had our lunch in the mess coach, augmented with Mrs. B's most excellent sponge cake. As we were only 10 today, we had to knuckle up and eat a bit more each to get it finished. It's hard, yes.

4270 then came back from Cheltenham. The trains were well filled today (as opposed to Thursday, which was wet and nobody travelled) and we thought we detected a somewhat joyful hen party on board too. 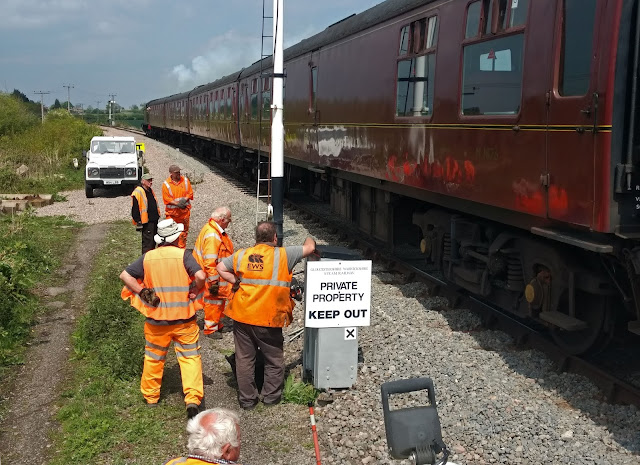 The sunlight is so much kinder when you take a passing shot, with the harsh sunlight in your back. As the train reaches the end of the TSR it opens up for the last half mile into Toddington. We wait (again) for renewed permission to do any work. 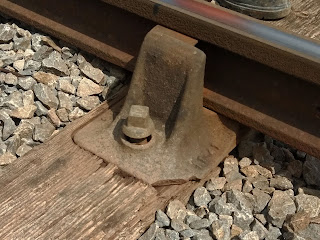 This is one of the items that raised our displeasure at the insulated joint by the signal.

The bolt is not securing the chair properly because the old (wooden) ferrule has failed. 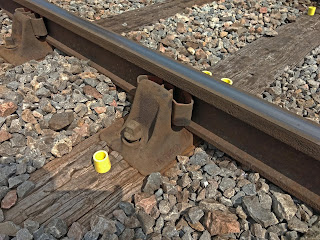 It's a small fault which is easily cured, as today we use much more durable plastic ferrules (although a garish yellow) whereas in the good old days the ferrules were little wooden barrels cut straight from a plank. That's not designed to last very long.

With the impact wrench we can quickly undo the chair screw, poke out the old ferrule, and place a new yellow one. Back on with the 'Animal' and it's job done. Next. 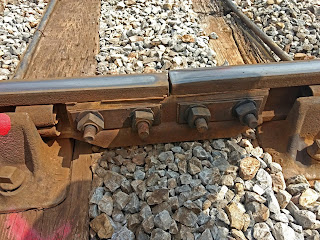 We also didn't like this insulated fishplate, nor the sleeper on the right. We decided to change both. The fishplate has a failing insulation (broken into bits) and this is probably because the rails on each side have different wear (this early stuff near Toddington is all second hand from 1981/82) so that the wheel has to overcome the height difference, which results in a very audible thump. That also hammers the sleepers down, and can bend the rail end itself. Hence the dropped joint here.

Unfortunately this fishplate is so specialised that we don't have a replacement off the shelf, so it needs to be ordered. Once fitted we should not have to return, or at least less often. 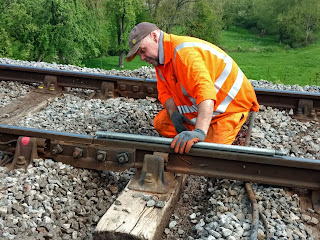 A very rough idea of the sort of lift required can be gleaned by placing some sort of straight edge across the joint. Notice how the LH end of it is free of the rail - it shows that a one eighth lifter is needed here. Insulated, bullhead too. 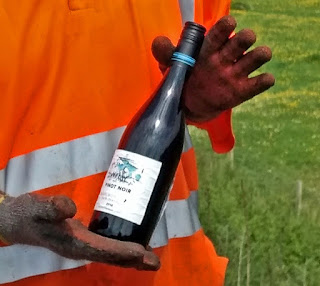 While checking the next joint along, Bert Ferrule found a complete and unopened bottle of 2018 Pinot Noir in the cess. We do have some boisterous passengers, it would seem. Flush with cash, too. 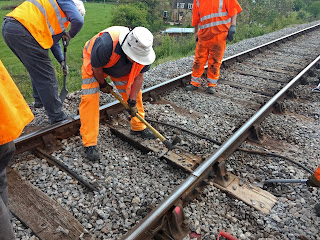 More mundane work continued, as we dug this suspect sleeper free so that it could be replaced. 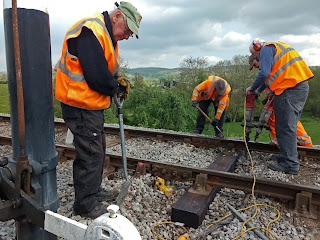 Here's the new one, already in place. That didn't take very long; we have an experienced crew and with two Landies on site we had all the tools to hand. 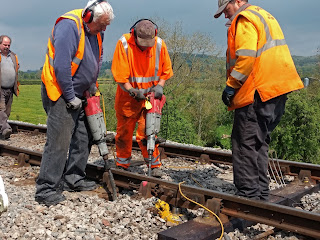 We packed the insulated joint, still with its old fishplate, as well as the two sleepers around it. The dip here has been removed but it was clear that the loud thumps from the wheel passing over the height difference between the rails will ensure that it won't be too long before we have to come back to pack it once again. Or even replace a cracked fishplate. 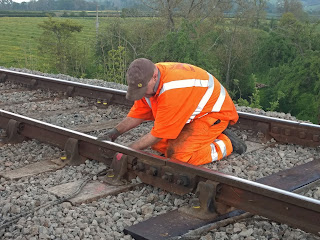 Bert checked the wear on a number of rails in the area. The wear rates are all different. Poor old Pete L was here when the rails were laid back in 1981/2 and felt a bit guilty about all these discrepancies, but explained that second hand rail was all we had at the time.

The extension to Broadway, our latest relay achievement, was done all in new rail on concretes and has given virtually no trouble since. 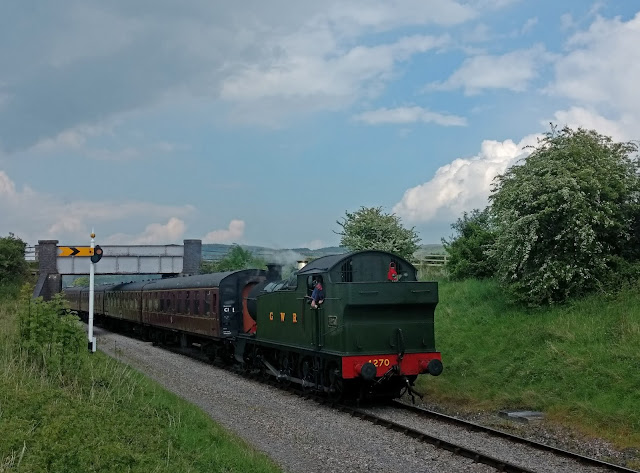 Job done at Didbrook, we moved on to south of Hayles Abbey halt to address two other dropped joints in the area.

Before starting, we let 4270 saunter by with a train for Cheltenham. 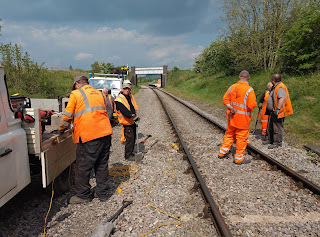 Again we stood and waited for permission to start, even though the train had passed.

With this job done too we returned home to Winchcombe. Some then treated themselves to a trip on the last train, 'just to check the track from above' while yours truly ventured into the cavernous C&W shed in search of a firebucket painted for Broadway. 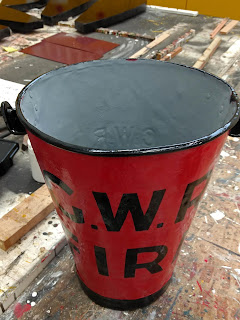 Ah - there it is. A note was left by the kind painter. Didn't they do well?

The whole bucket, a donation from a well wisher, has been repainted and lettered.

Note that at the back the original owner has had his letters embossed - G-W-R.

We are still looking for another bucket like this one ( a tall bucket) and some brackets, if you know of any. 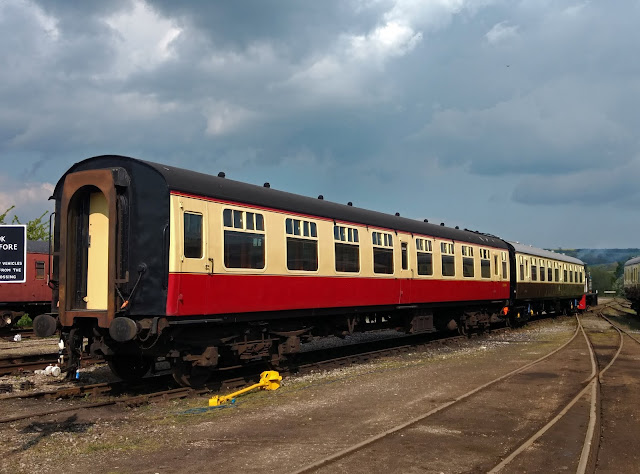 A final look outside the shed, before locking up the tools. Isn't this a lovely colour combination, against a threatening sky? The nearest vehicle is one of the two we have borrowed from the NYMR, while the furthest one has had a shiny repaint and looks to be outshopped very soon.

Quality stuff from our very own C&W department.