Have your cake and eat it.

Despite being the last Saturday before Christmas, we had a good turnout of 10 today. The prospect of fine weather and a substantial Christmas cake no doubt propelling extra volunteers out of bed.

We are now gearing up for the winter works starting in January. 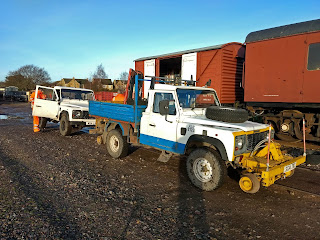 A delegation of 4 went up to Toddington to bring further supplies for the relay, while the other 8 pottered around the yard bringing stuff hither and thither.

A bit like a teenager tidying up his room, as it's raining outside anyway.

Here a fleet of 2 Landies has been loaded up and is ready to go. 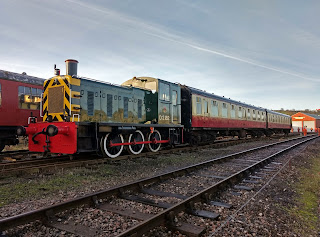 Outside a mini train of 03 and the two new carriages, on loan from the NYMR, was available for inspection. They are SKs in carmine and cream. Nice. 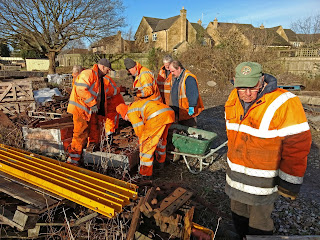 We went round the yard with the wheelbarrow, putting away bits that were left out after late in the day jobs, and reorganising pallets of stuff that didn't fit or ought better to be over there. 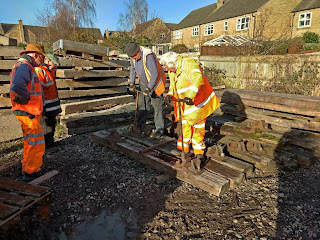 A couple fancied having a go at removing some broken chairs from the sleepers retrieved from the C&W side of the yard earlier in the week.

We also managed to extract two cast iron chairs from concrete sleepers that were lying broken in a pile.

Neil and Mike are using the old fashioned T spanners, as Alan and a pensive Pete look on. 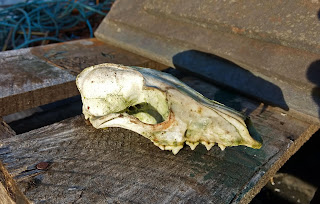 In the undergrowth we found the skeleton of a long lost PWay volunteer. It must be one of ours, as it has a large jaw and a small brain cavity.... 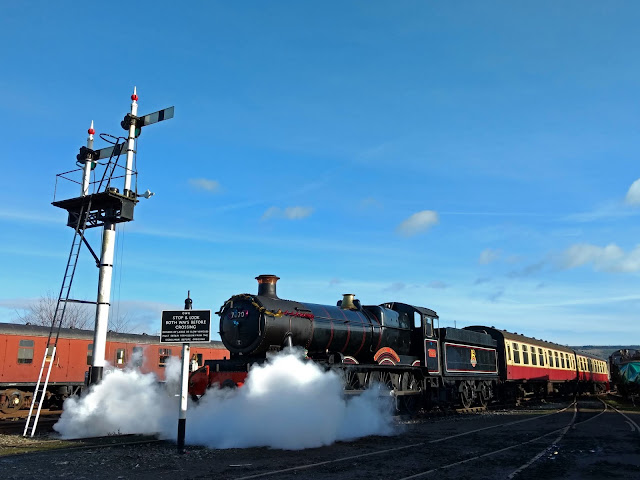 In between two Santa services Dinmore Manor coupled up to the two new coaches to try out the steam heating.

As various clouds of steam started to drift out of different locations under the coaches, notes were hastily scribbled to see which were meant to be coming out of where they did, and which were not. 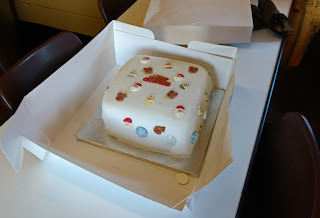 Then at last it was lunch time, and the long awaited moment to reveal Mrs. B's piece de la resistance, her famous marzipan covered Christmas cake.

Yes, there is cake under all that icing and marzipan, but if you cut your slice carefully, you won't have to eat very much of it. 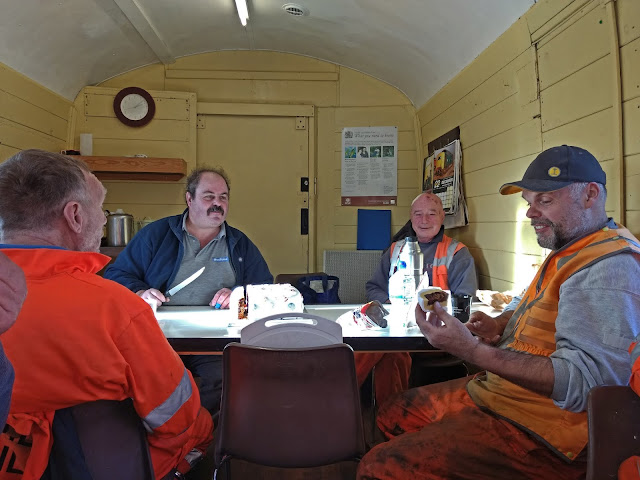 A beaming Nigel looks on as Bert Ferrule examines the marzipan-to-cake ratio. About two to one, we reckon, you've got a good one! 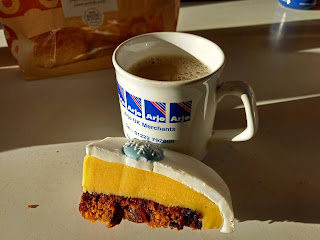 After the soaking we had last week, this makes up for it all again. Marzipan, a tiny sliver of cake, and a mug of tea served by a mate. Happy days.

A message from above then caused us to run out of the mess coach to look at the sky. 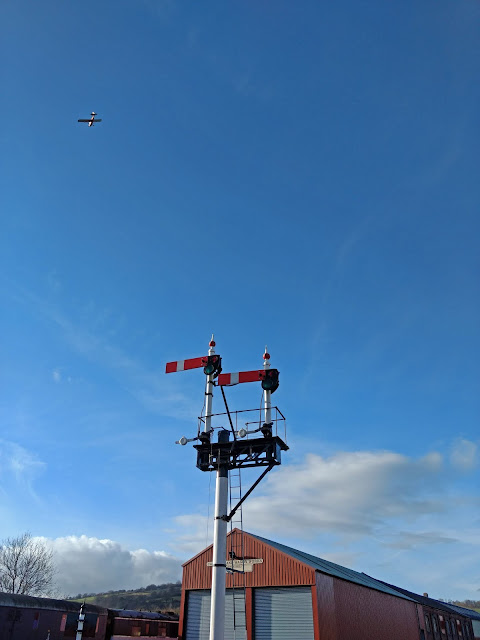 The message was from David, our wing walker pilot, who said that he was about to pass over Winchcombe on his way to Wellesbourne.

A small aeroplane duly appeared, but sadly not the Boeing Stearman he usually flies (nor with anyone attached to the top of the wing for 'enjoyment').

David did two circles, but we couldn't really make him out, probably as there is a minimum height required.

He waggled his wings a bit, then flew on. 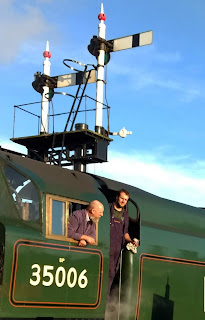 After Dinmore Manor had tried out the steam heating of the two NYMR carriages, it was the turn of P&O to have a go in between Santa trains. These trains spend quite a bit of time in the platform as its passengers go and visit Santa one by one.

Driver and fireman enjoy the experience of reversing into the C&W sidings for once. What we believe is known as 'rare mileage' by some afficionados.

They did not reach the buffer stops at the far end though, which would lead to severe frustration with the 'buffer kisser' fraternity.

Picture taken by a 'festoon', of course. 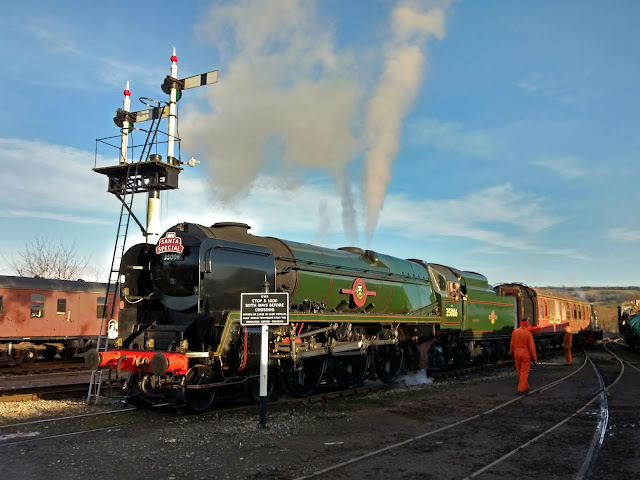 Here you have the unusual sight of a Bulleid pacific on the other side of the bracket signal, with the safety valves blowing. Well, the later is not so unusual, the efficiency of the thermic syphons seems to surprise many firemen.

The coach being tested this time is the recent acquisition from Quainton Road. Might as well test the steam heating on that one too, if there is a loco spare for half an hour.


Friday in the loco shed

The three intrepid canopy extension builders were at work again, although one has gone strange and is actually making a yard lamp ladder and platform. 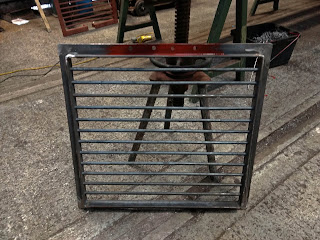 This is what John did on Wednesday: the four sides of the platform base are now welded together, and 12 lengths of bar have been inserted in between.

Nice and parallel they are too. At the top are the holes for the ladder support. 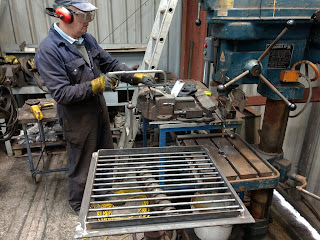 On Friday John started making the bracket that will become the ladder support. It's quite complicated, as it has two arms that face downwards that need to mirror the sloping angle of the ladder exactly. 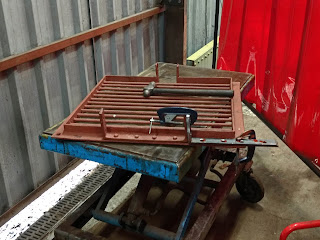 This is the original from which we are working. How lucky we are to have an original ladder and platform, as they are quite rare. Most ladders seem to have been removed when the yard lamp posts were sold off. On ours from Dumbleton you can still see where one of the bolts was sawn off, rather than unscrewed from the casting.

On the right is part of the new bracket, laid next to the original one to get the angle the same. 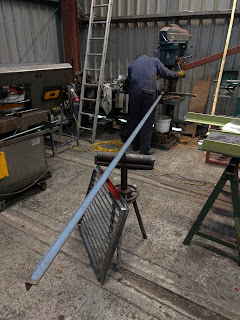 A length of angle was used when drilling the holes in the bracket, to make sure they correspond when we actually mount the ladder to the platform. This angle will become part of the new ladder.

Meanwhile Neal completed drilling the first fascia board, and started on the second. The heavy fascia board had to be turned over and lifted to a different part of the supports, necessitating a tricky journey of the forklift through the shed, in between all the restoration work going on in there.

The first of the two lengths of angle were tack welded on to the second fascia board, and then Neal was able to start drilling the many holes, something like 100 per board.

We have had our fingers rapped for saying that every fifth hole drilled is for the rivets. In fact the fifth hole is for a bolt for the structure that will hold on the dagger boards.

Sack cloth and ashes here then. Or as per dictionary definition: 'a display of extreme grief, remorse, or repentance'. Yup, that's about it. Won't make such a basic mistake again. 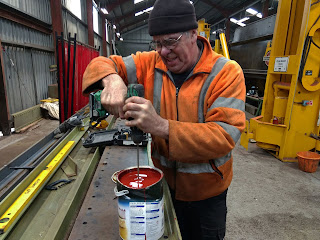 Neal has picked up some great bargains at car boot sales in his time. As we ran out of metal primer he produced a 5L tin of it. However, there was a reason it was in a car boot sale (no, it wasn't hot) and that was that at some time in its career it had been dropped from a height. The whole tin had a decidedly wonky appearance, and a strong lean to one side.

Having spent quite some time in somebody's garage, all the heavy sediment had sunk to the bottom, where it formed a solid lump. Extensive, plodding stirring of the mass by yours truly offered little relief, until Neal intervened with a kitchen mixer attachment on the end of a drill. The recalcitrant paint was soon stirred into a silky cream, and applied liberally to four more of the 7 lengths of angle we need to prepare for the purlins in the drawing seen last week. 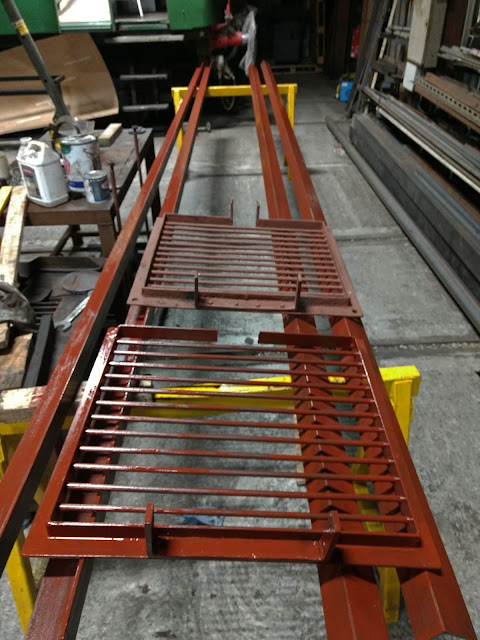 Here is the state of play at the end of Friday.

Four lengths of angle have been degreased, sanded clean, and painted in red oxide.

In the foreground is John's superb recreation of the yard lamp platform. The bracket with the two precisely angled supports can be seen fitted, nearest to the camera.

Behind is the original.

We still need to drill the two holes for the handrail supports, and make the two bars, fitting into the gap in the background, with which the platform is bolted to the cast iron post.

The Extension blog will now take a week's rest. John is off on a well deserved holiday in warmer climes, while the other two celebrate Christmas at home. Resumption of activities will be Monday week, or possibly a week today, if the all the Turkey has already been consumed by then. 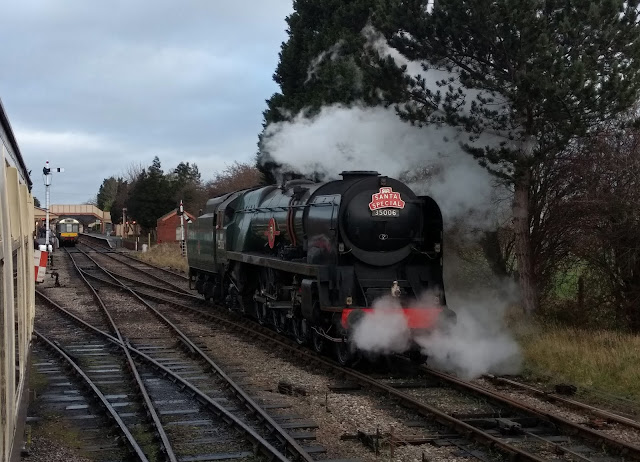 We wish our readers a joyous Christmas and a reposing rest over the next week or so, but don't forget the valiant few who a running Santa services right now, an important piece of cash flow that is so welcome at this time of year. Thanks, guys!

Here's P&O off from Toddington to pick up the rake for the first train out of Winchcombe in the morning. 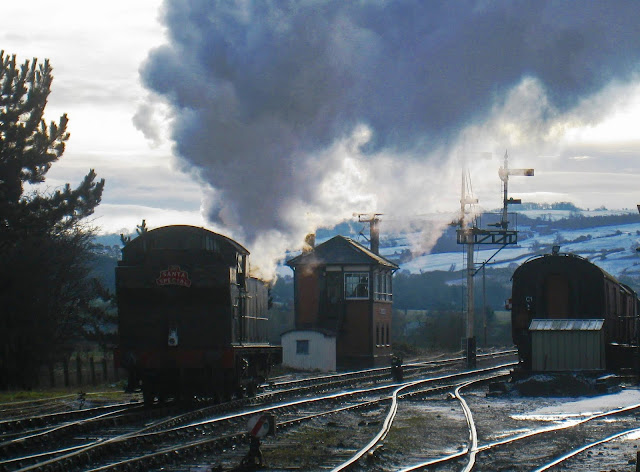 There aren't many pictures of the railway with snow on these days, but here is one captured on 28th December 2009. Snow on them thar hills. Once you would have seen Hailes Abbey rise out in front of them, today it is Toddington signal box.

See you again soon, and have a good one.