A grey but warm start this morning - great PWay weather! 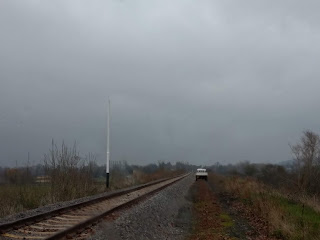 Broadway today, where a bit more work is needed to get everything right.

As our access through the new car park is not yet ready we entered the trackbed at Little Buckland. Landie one followed new Landie two along the newly laid track.

This signal post is new, one of three just planted. A Fixed Distant? (Don't shoot if wrong!) 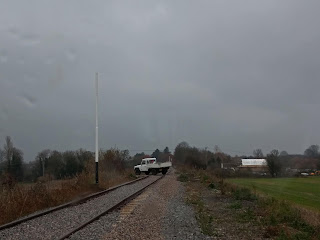 There comes a point where the new track swings from one side to the other, and here is where we cross.

Landie two bumps over the ballasted crossing, next to the second new signal post. We'll leave its exact name to the pundits. 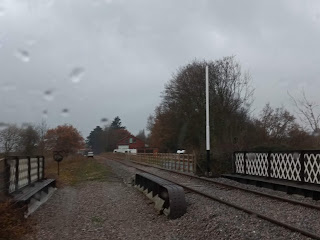 All good things come in threes, and so do new signal posts. Here is the third by the Childswickham Road bridge.

Oh, there is a bit of rain about now, wasn't it going to be dry today? Well, it is November. 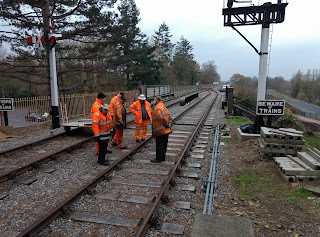 The job today: replace a short stretch of bullhead rail with flatbottom. It needs a debate though, so here we are holding it.

The two 'BEWARE of TRAINS' notices were put there for a purpose, to warn users of the barrow crossing.

What barrow crossing? Aha, that is where we come in.... 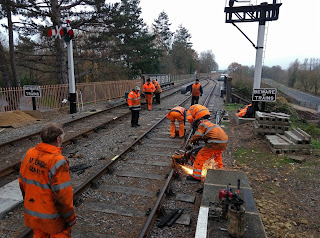 The offending length of bullhead rail is marked in yellow paint, and then Bert Ferrule can attack it with the disk cutter. 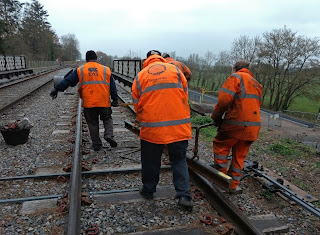 Four strong men good and true then trundle off with the length of bullhead we cut out. 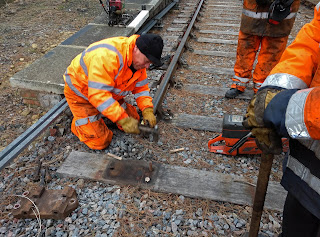 The FB we are going to put in instead sits on Pan 11 cast iron base plates, instead of the traditional 20Kg chairs a bit further along. Both have 3 holes, but of course not in the same place. That would be too easy.

So we need to plug the old holes with spiles, which David here is hammering in as far as they will go. The bits that stick out are then sawn off, so that the sleeper is still flat on top. New holes are then drilled.


Then comes the complicated bit (see debate earlier). The existing bit of FB rail to the south has to move up, and take the place of the length of bullhead we took out. There's a bit of 'the piece of string is now right at this end, and now its the other end that is too short' about this. Indeed, a new gap then opens up behind the camera. Once we have all got together and made a gang with the nips and pulled this much longer piece along. 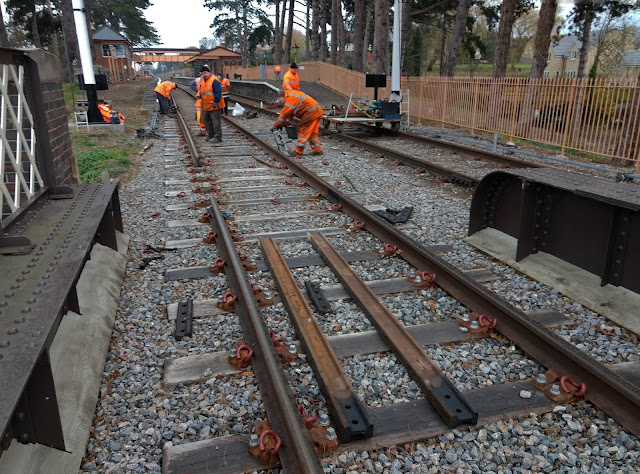 Here the longer FB bit has been pulled north, closing the gap where the crossing will be, but opening up a new one near the bridge.

The bits of bullhead rail we cut out have been dropped in the 4 foot here. 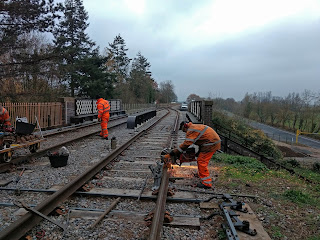 After pulling the longer bit north, the gap created behind is too short to take a new length of rail. The minimum allowed is 15ft, otherwise the joints are too close together.

Bert then springs back into action, and reduces the length of the longer bit of FB we pulled up.

Are you following this, at the back? 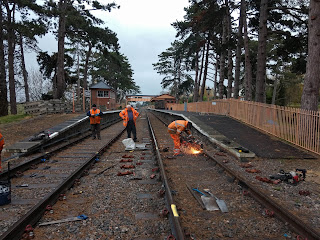 With the disc cutter all nice and hot now, Bert jumps over to the down line. Well, not so much jumps as hobbles, that disc cutter is hard work and you're bent over forwards all the time, which is hard on the back.

Bert let Neil take over after a bit. Everyone deserves a rest. Even the wicked. 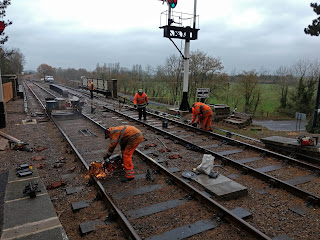 In this view you can see that the gap on the up line has been closed again, and even fishplated up already. We work quickly and efficiently. Bert is now cutting out the 2 lengths of bullhead out of the down line. 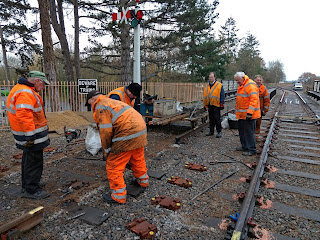 Here both lengths of bullhead rail on the down line have also gone. They're now on the PWay trolley, ready to be rolled away to an easier pick up point down the line.

The new Pan 11 base plates have been laid out in the foreground. They have a flatter profile than the traditional chairs, which allows the rubber crossing sections to lie down flat.

On the right the sawdust tells you that these base plates have had their (new) holes drilled, and indeed that piece of rail is now nicely bolted down into its new position. 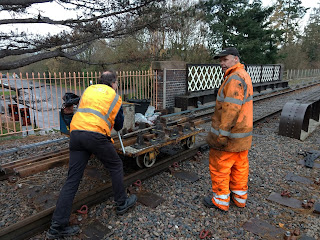 To keep the workplace neat, Richard is rolling those two bullhead offcuts to the other side of the bridge, together with the chairs we no longer need (replaced by the Pan 11s). 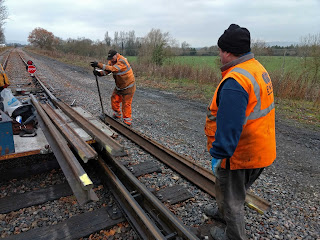 On the other side of the bridge the offcuts are dropped down on to the trackside, where Stevie can pick them up more easily. 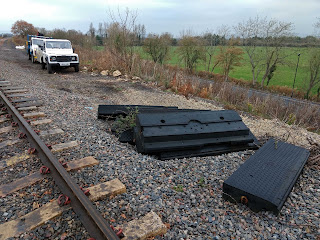 This is also where Stevie has brought the set of rubber crossing mats for the barrow crossing that we are building.

We're going to use a mini digger to transport them to the crossing site, and then drop them in from above. They are surprisingly heavy, for something made of rubber. 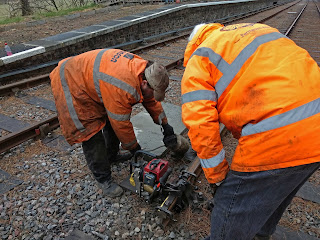 While we were dropping off the rails, Dave and Neil prepared for the next job on the down line, which was to drill new holes in the remaining length of bullhead. 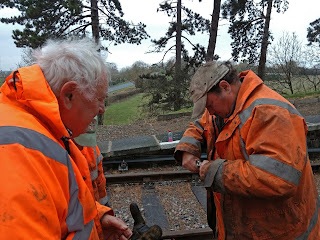 The drill head is lubricated with a special fluid that is pumped out of a portable pressurised reservoir, similar to a weedkiller sprayer.

The fluid wasn't getting through, there was a kink in the feed pipe.

Neil is watching Dave intently for any wrong move. We are always keen to give advice when a colleague is doing something wrong.

And, Neil, is Dave doing it all wrong? 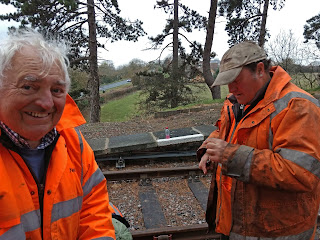 Why, yes, Dave is doing it all wrong ! 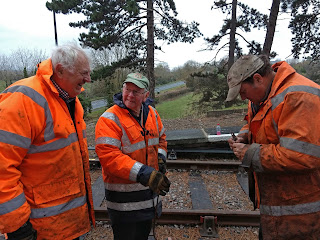 Even Pete agrees, we would do this so much better. 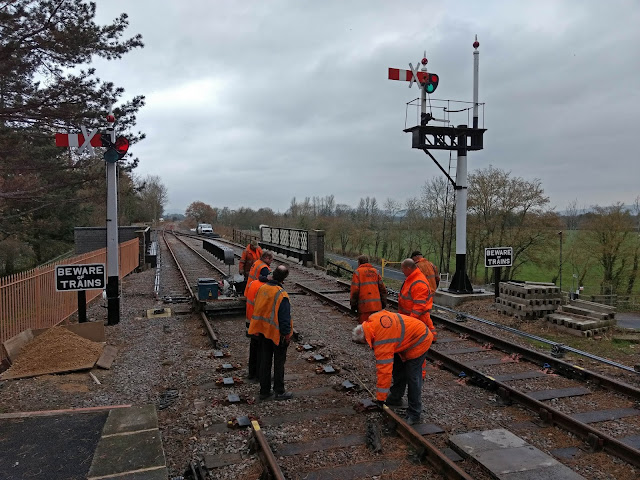 Soon it began to get dark. We came in the dark, and we would leave in the dark. It's that time of year now.

The final gap is measured for length. Next week we will bring 4 lengths of FB rail to fill those gaps. The mini digger will bring them over the bridge, we will fit them, then collect and place the rubber sections.


Blast from the past: 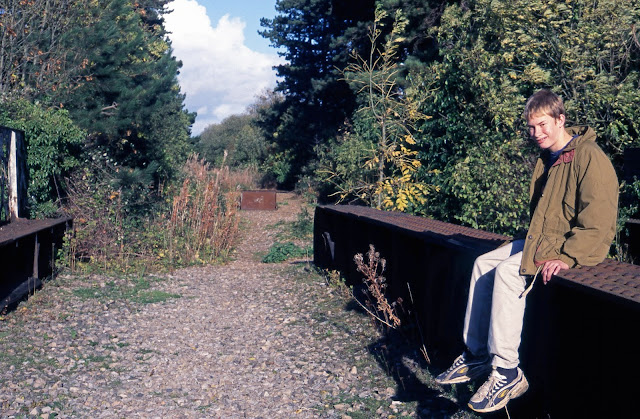 It's a picture by our very own John Lees, of the spot we were working on today. Except that John took the picture way back in September 1998. Twenty years ago already. He was standing on the bridge - see how rusty it was then - and the view is north.

Today you can see two platforms here, a signal box, a completely rebuilt station, and the centre span of the Henley in Arden footbridge.

All done thanks to our generous shareholders and kind supporters who left us a legacy. Volunteers then did the job.

The young chap, by the way, is Nick Lewis, a volunteer with us for a brief period, who came out with John.
Posted by Jo at 18:30