A day at the races

.... but not for us, we just watched the happy punters on their way.

We were back at Gretton today, to resolve a number of dipped joints and broken chairs on the stretch that we were fish plate greasing on Wednesday.

Numbers were low - 8 registered, only 5 out on the track, despite the sun and the 3 cakes on offer. But we achieved a lot nonetheless. 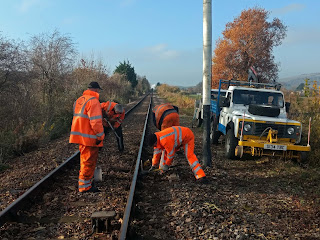 The first train having just passed (you can see it in the distance heading for the races) we jumped in by the Fixed Distant signal and packed the first dipped joint. 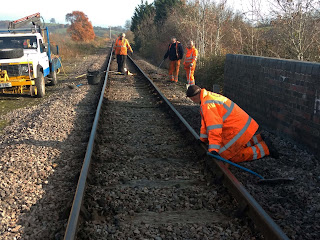 We did several of these dips, assisted by our stone blowing apparatus. Bert got down on his hands and knees to tell us when the track was level again. 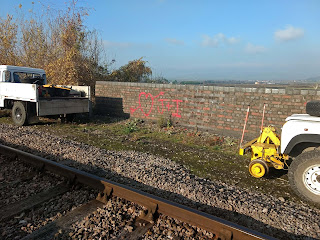 During our work, we were dismayed to discover more graffiti on our bridges, apparently from the same teenage artist who attacked every single one from Southam to Greet.

This is a mild one, most were deeply offensive. 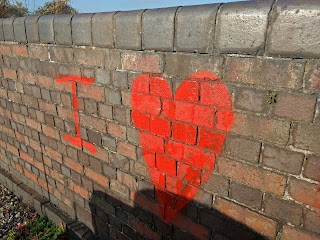 We can't tell you what it was the graffiti artist 'loved'. 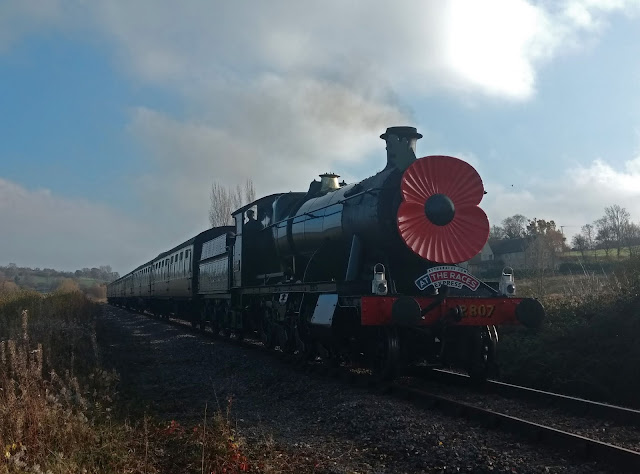 Although we are in the non running season - sort of - there were 3 trains about today. Two returns for the At The Races charter, and in the interim (surely a clever way of using a loco already in steam) a Fish & Chip special. 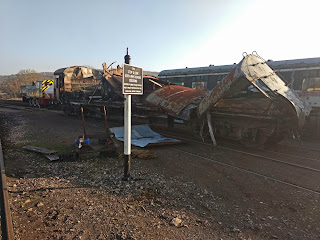 Lunch was taken in the mess coach, just a couple of miles away at Winchcombe.

The second of the two ruined coaches is now out in front of the C&W barn, where the owner will be sheeting it over, ready for transport by road. 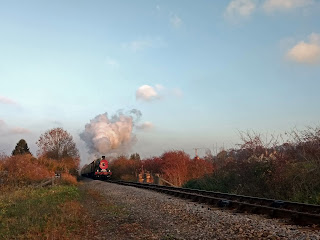 After lunch, and with the Fish & Chip special having passed as we ate our snap, we were back at Gretton.

As the light began to fail - it does so earlier and earlier now as we are heading for winter - we had the pleasure of watching the ECS working for the return journey of the At The Races charter. 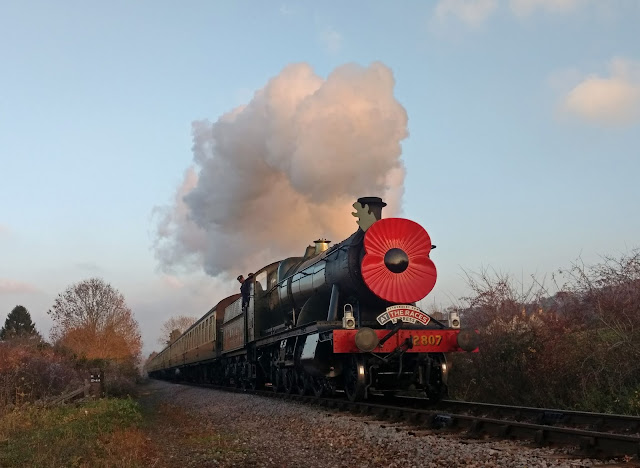 The falling light results in some great colour effects. Just look at the orange sunlight reflected in the steam here.

Our shedmaster is driving 2807 personally, and is keeping a friendly lookout for us.

That poppy is the biggest we have ever seen. How much did they have to put in the tin for one of those?


Friday in the loco shed

The valliant riveters were at it again. 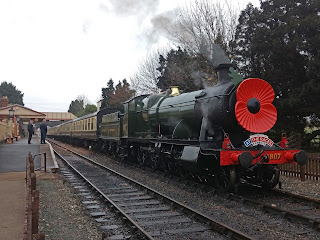 Just a quick look 'over the fence' to see what was out and about today. Of course the PWay gang saw 2807 out on Saturday, but she was also working a train the day before, an additional Friday At The Races charter.

Here she is on P2 at Toddington, warming up the train for the passengers. 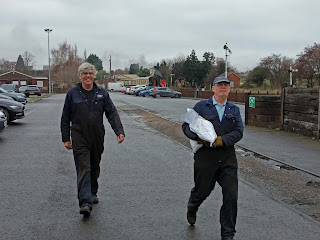 Riveting on Friday nearly didn't happen. We needed more rivets, we used them all up, so had to order 300 more. At the last minute they arrived at the office, and here are Neal and John proudly bearing the 'prize' over to the shed. 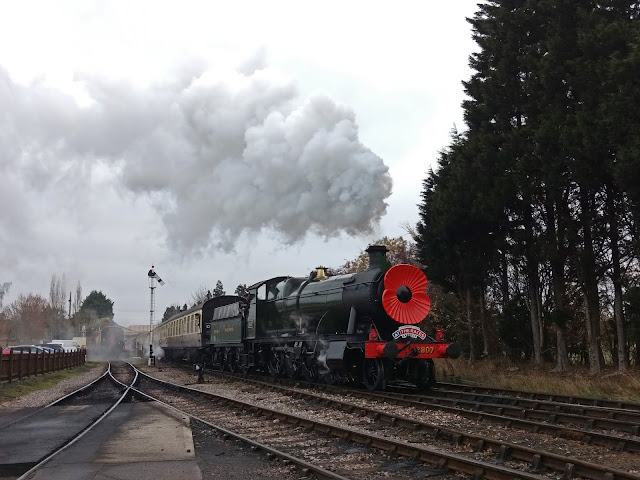 Shortly after that, as we were setting up the tools and items to be riveted, we heard a toot and the charter was off.

Here is 2807 with its enormous poppy just crossing over from P1 to the single line, and thereby giving us a good shot of her slender lines. If you can call a GWR heavy freight loco 'slender'. Well, we think she has a certain elegance. Some locos have it, others don't. 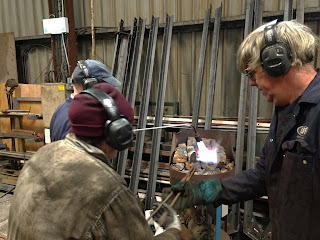 The second reason Friday nearly didn't happen was that the fourth volunteer left a telephone message to say 'Yes, I'm not coming'. Oh.

We were very lucky to have Alex (with the red beanie on the left) jump into the fourth place.

She did a brilliant job all day.

You've seen a lot of riveting pictures by now, so here are two others to keep things interesting. 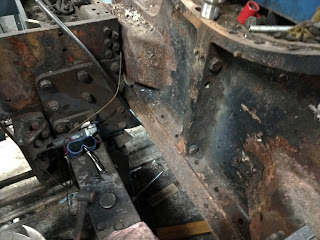 Take this one. Today there was a second rivet gun in action, further down in the shed. It was like male and female rivet guns calling each other in the wilderness.

The second rivet gun was helping to remove the bolts that hold the two cylinders together. Centre right in this picture you can see one big bolt that has already been removed, and three more below it with the heads cut off. It's a very impressive job, here on 3850. We're looking into the area previously filled by the frame stretcher/annex sand boxes. The two cylinder halves weigh over 2 1/2 tons each, and both will be replaced by new castings. Tremendous work, you have to admire the experience that we are very fortunate to have. 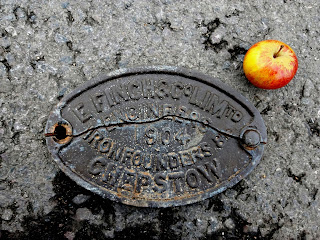 Our other interesting picture is of the aqueduct works plate. It's now been carefully removed from the channel to which is was bolted.

This is the better of the two, the other was shattered by years of rust pushing from behind.

We will have this little piece of Honeybourne line history shotblasted and repaired, for display in due course, once there is a suitable area on the GWSR for it (and some other museum items from our past that we know of.) 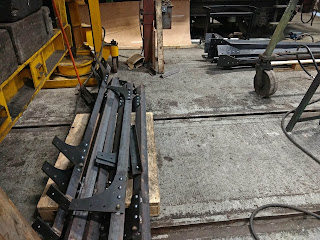 Finally, here is the sum total of our riveting work on Friday. We did all the uprights and the cross members that will support the corrugated iron roof of the two sets of steps. That was 66 rivets today, a number which pretty much completes the riveting, with the exception of a small amount that will be done to assemble the above items into complete frames, which will in due course be taken to Broadway.

The next step is to degrease everything, after which all the items we have fabricated can go to the zinc platers. That process can take as little as a week, so we expect all the items to be returned zinc plated very shortly, after which they can receive a coat of primer.

Then comes final assembly at Broadway....