Bit tricky finding work when so many trains are running (three today, with a bricks event thrown in for good measure) but a number of defective sleepers had been reported by our regular track walkers, and with the use of small hydraulic jacks fitting under the rails we could replace these in between trains. 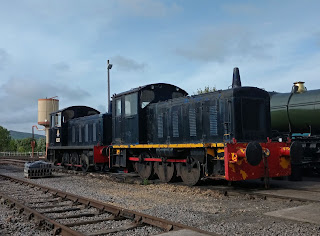 So, off to play 'Hunt the Mess Coach' and there it was, hidden behind the 76077 boiler.

Outside, a twin pair of diesel shunters. Spot the difference. 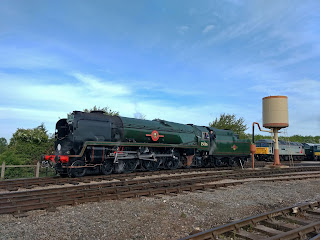 As we had our tea and doughnuts (thank you, Diana) various locomotives hissed and grumbled by, destined for the three trains that were running today.

P&O has the loudest drain cocks your blogger has ever heard.

On our way to the work site behind the new points we put in at Toddington south, we passed this class 20 which is  being stripped for spares. Interesting to see the different compartments for each function, with a cab tacked on at one end. The hoods are lying next to it. This loco has been to France and back. 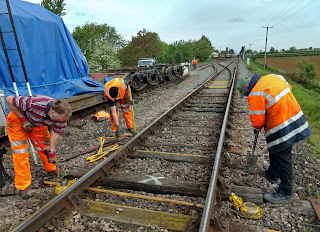 Alongside the spare engine and bogies on the headshunt our track walker (yeah, thanks very much Tony!) found and marked up 24 sleepers for us to change.

'X' marks the spot, as it were. They were also numbered, so that we knew just exactly how much (or little) we had done. 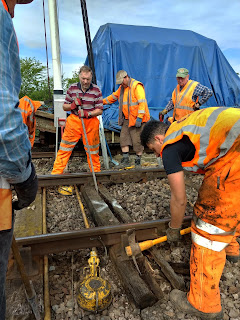 These sleepers here are among the very oldest on the railway, dating back to the earliest days when the first track was laid out of Toddington towards Didbrook.

Sleepers, rail and fittings in those days were obtained on the scrounge and not necessarily of the highest quality. This accounts for quite some decay today, as well as so called 'crippled ends' where the last few inches of the old rail bow down.

By spot resleepering here, we will give it another bit of life, but it's clearly not the same high standard as the welded track with deep ballast on the extension.

Another symptom of the old track is the use of GWR throughbolters, which can only be released by smashing the sleeper into two or more pieces. The bolts are always rusted on solid. 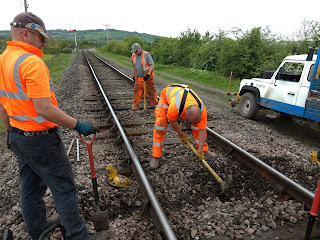 After the sleeper has been smashed or split lengthways (carefully removing two toads hiding underneath one today) the bed has to be scraped clean ready for its replacement.

We don't actually have a lot of replacement sleepers, so are using what is left over from the Broadway extension. 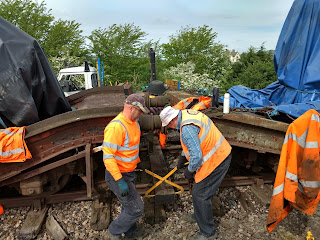 The new sleepers were brought up by our ever useful Landie, and dragged underneath the wagons parked on the headshunt. Once this side, a team of 4 on nips can then slide them into the bed vacated by the rotten one (and the toads)


With the replacement sleeper in place, we can take a breather from digging and hauling heavy stuff. Phew! Only 23 to go.... 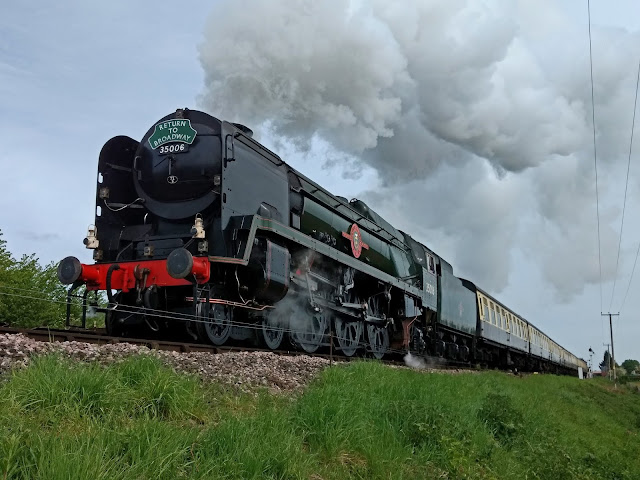 Another welcome excuse for a well deserved rest is the passing of a steam train, here 35006. Sorry, have to stop digging now, got to let this past. 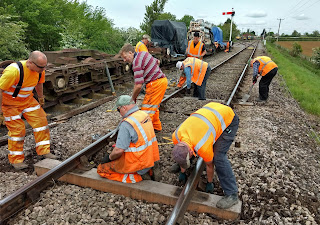 After the train has gone, we had to walk the new 3 bolted chairs over from the Landie, and wriggle them in under the rails.

In the background you can see the final phase of a sleeper replacement - shovel packing and back filling. 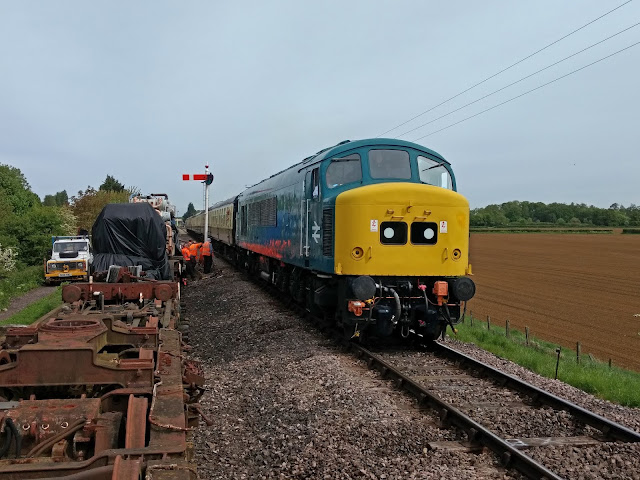 Then we stood by the wayside again, this time to let the Peak drift by (we are still within the 10mph station limit here). 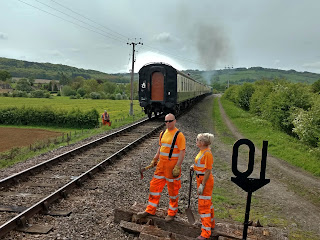 Here's the limit, and there goes the train, now with the throttle open.

For our lunch we walked back to the mess coach for our sarnies and a peaceful cup of tea.

It wasn't far from the truth. 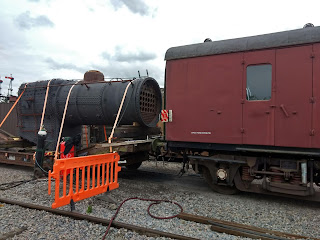 Indeed our mess coach was parked right next to the 76077 boiler, where someone was working to get the smokebox ring off.

You couldn't get any closer to us if you tried. 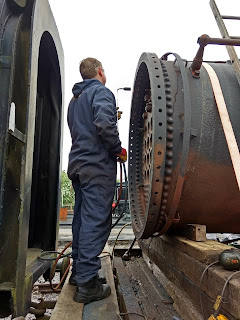 To be fair, they did stop to let us eat in peace and quiet, for which we were very grateful.

After the end of the day, the job carried on and here you can see the rivets that need taking out being heated with a torch.

The ring has to come off for a new smokebox to be fitted. 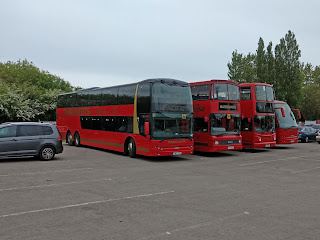 Lunch time also allowed a quick peep into the public area, i.e. the car park where a large marquee held the toy brick exhibits. Just look at how the customers were shipped in - there were at least 5 coaches. Good to see that. 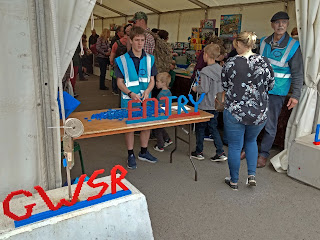 A lot of trouble had been taken to make an entrance out of bricks, with our name prominent. 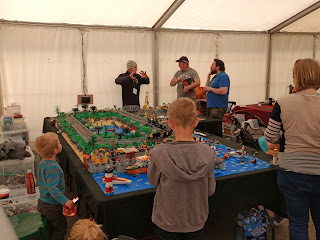 Inside - amongst other exhibits, a train set made of bricks. It drew admiring stares from both young and old. 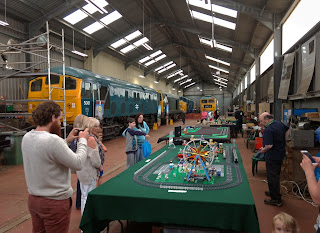 You were then guided on into the diesel shed, with more exhibits and the chance to see some of our veterans in a shed that is not seen so often. 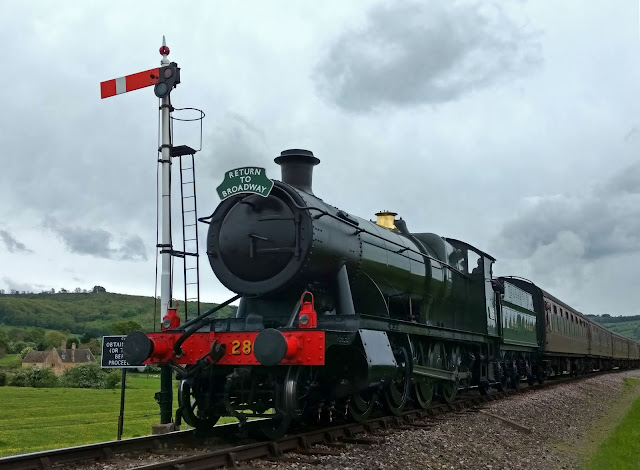 Then, back to work! But only until the next train went by, sadly once again we had to down tools, have a coffee from the flask and watch it. It was 2807 with the maroon set. 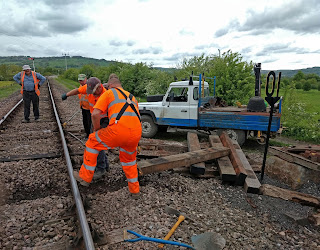 Slowly we ploughed our way through one sleeper replacement after another. By the end of the day, when we had no further easily available sleepers to use, we had done 11, nearly half of the job. 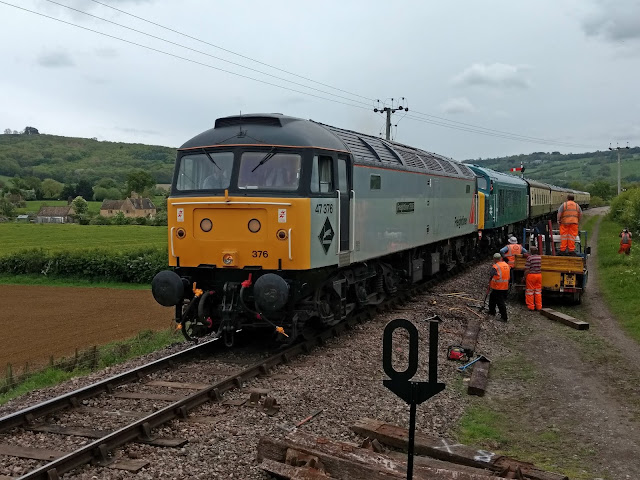 Rumours that the Peak had failed at Gotherington (word spreads quickly in this family) turned out to be true, alas. The class 47 played 'Thunderbird' and rescued the train. Here is the double header (every cloud has a silver lining) arriving back at Toddington. Scattered extracted sleepers can be seen in the foreground. 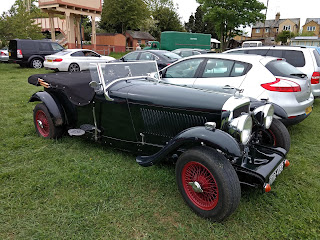 Retrieving our car from the overflow car park field, we found this magnificent open tourer, a Bentley, parked right behind. What a beautiful car.

A half day visit to the station to put up the fourth and last BEWARE of TRAINS sign, this one by the bracket signal: 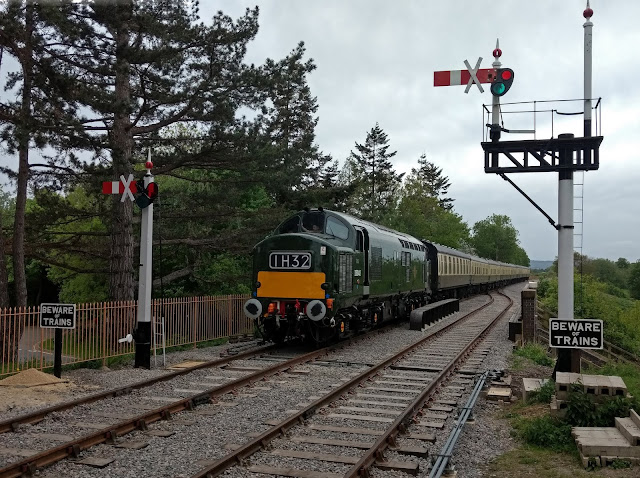 No trains on Fridays - WRONG! This diesel driver experience train blew life into the otherwise closed station, and the picture shows off the two notices that now feature on the southern ends of the two platforms.

If you want to see the Growler leaving the station again, there is a video here:
https://youtu.be/lkaJHcXf1g0
After a slow and perhaps nervous start, it would seem that the candidate driver at the controls was told to give it a bit more welly, and he did... 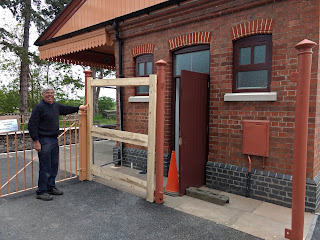 Neal, always busy, has been making the woodwork for the modesty screen. Here is the frame for the first half, all beautifully jointed. 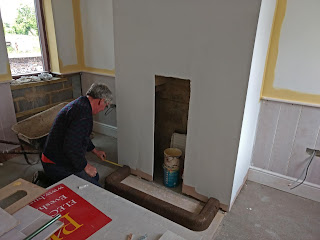 Inside we scratched our heads over the fireplace in the cafe. A spontaneous collection raised £2000 for a near replica slate fireplace surround and grate. Aren't people generous!  Here Neal is measuring up the area we have, and how it fits in with the steel fender in front. This is an original from Broadway, imagine that. It was found buried in the clay, as were (over the years) two crowd barrier posts, a modesty screen corner post, and two broken off cast iron canopy supports. Amazing. The fender is now going away for a thourough shot blasting. 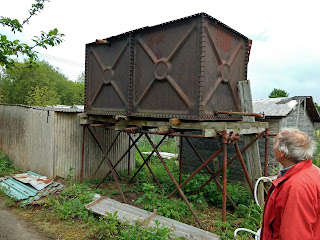 A local nursery owner came to the station gate and said he had the original water tower from the station, and were we interested.

But Broadway never had a water tower.... this we had to see. It was only a few hundred yards away.

The water tower in question turned out to be a Braithwaite tank, probably made for the nursery itself as the inlet and exit pipes were quite small. Sadly it was also badly rusted, so no use to us. You can still buy these tanks new.

The nursery owner also added an interesting 'a propos' - he said he had the roof of an old carriage. Surely not? 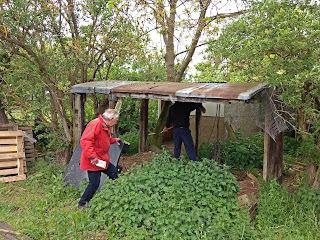 It was indeed the roof from an old item of rolling stock, without walls or uprights. Instead, it was supported on 6 upright sleepers. What could it have been then? 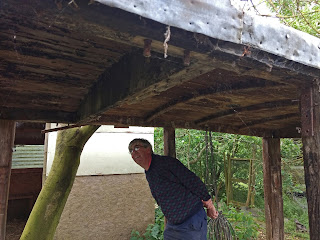 You can see here a number of roof sticks in typical railway style, together with one of two larger ones towards one end. There was a hole for a stove pipe in the middle.

We concluded that what we had here was the roof of a very old brake van, with a veranda at one end. We measured the length of the roof as 12'6''. This seems to be shorter than what we found on the internet, although possibly some brake vans had open verandas, so the chassis could be longer.

Does anybody have any idea what exactly vehicle this could have been? Everything we saw was made of wood, there was no metal except to cover the roof, a later addition. There were traces of a central door leading from the inside to the veranda. 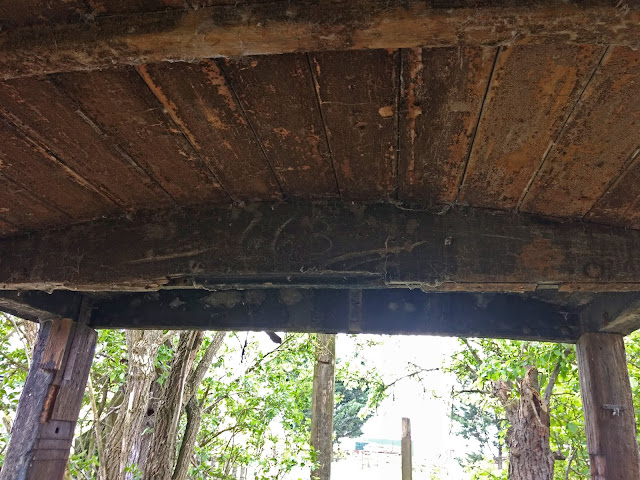 Above the traces of the door was a chalked number - 66B. Beyond was the veranda, and on the 2 corners you can see two of the sleeper uprights.