Every now and then your blogger is allowed out on a little holiday, and this week was one of those occasions. As it happens, PWay activity was restrained last week, too wet for one group, and too hot for another. You just can't get it right. 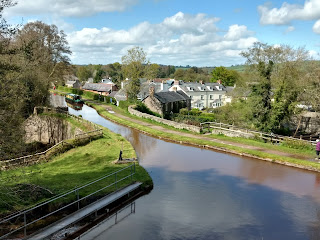 But even canal boat pictures can have a railway angle, as this one was taken from a disused railway bridge at Talybont on the Mon and Brec canal.

The disused line from Brecon to Merthyr climbed steeply out of Talybont up to the amazing Torpantau tunnel, the highest in Britain. Just beyond it is now the terminus of the Brecon Mountain railway, located in a really wild area. 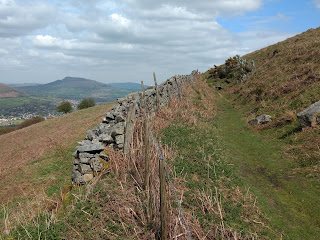 More interesting railway remains were found further south along the canal at Llanfoist. Here three self acting inclines ran from near a mountain top down to the canal wharf, bringing iron from Blaenavon.
The level section, high up as you can see, was the 3 mile long 2ft gauge Hill's tramroad. It even had a small tunnel, just visible here at the end of the cutting. It was cut into the steep hill side. 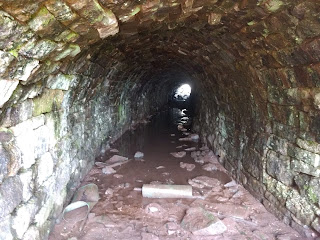 This tunnel was built of stone blocks without mortar as early as 1815. That makes it one of the earliest railway tunnels in Britain.

Traction was by horse, which pulled two flangeless wagons along 'L' shaped rails.

An amazing piece of industrial archaeology, but you need to be tough to climb all the way up Blorenge Hill to find it. 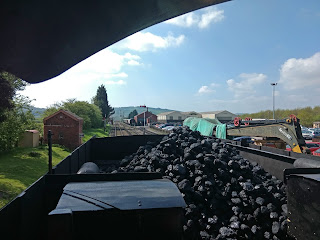 Back to Toddington then with a bump. Invited on board Dinmore to inspect the footplate, we saw this not inconsiderable pile of coal that all has to be shovelled through a small one foot hole, while it is swaying about from left to right. The friendly footplate crew is part of what makes our line so popular with visitors, because, once again, the carriages were well filled, and this time we were able to check it from the inside, on the cushions as it were. Broadway village was also reported to be humming, with the railway no doubt taking some responsibility for that. 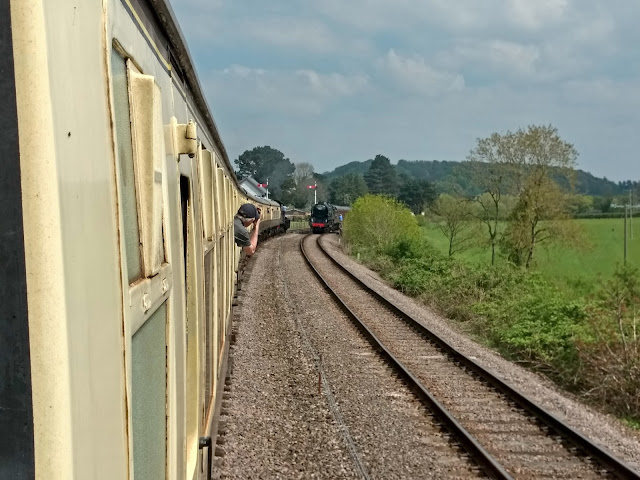 This is the sort of view you get from the train nowadays - two large standard gauge trains with 8 on, meeting on a curve. Quite thrilling really. Did we really build all that from a bare trackbed? 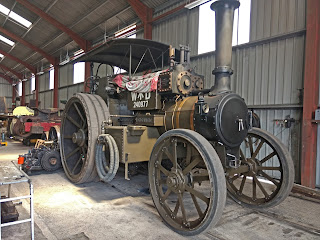 In the loco shed we discovered this visitor, still parked up after the Wartime in the Cotswolds event. It's a huge road locomotive, built by McLaren in 1912 and liveried in WW1 colours.

There's a great film on YouTube of it going round a bend in a WW1 military convoy:
https://youtu.be/huQhqXiB8O0
Check out the driver heaving at the wheel, and the front wheels hopping along the road with each piston beat.

Finally news came that the Broadway canopy lamps were up at last. This we had to see! 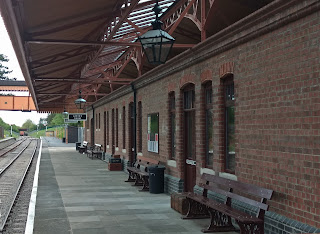 Here they are, three in a row. The fourth one is still in store and is due to go under the similar canopy on P2. 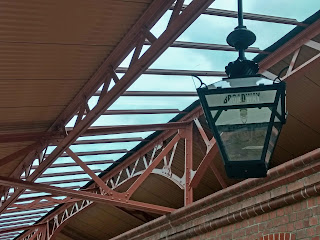 They have been hung at a 45 degree angle to reveal to the passing public both engraved BROADWAY station names, similar to the tops on the platform lamp posts. This was done on several, but not all, the stations along our line. A curious but entirely logical arrangement, as this way people can read the name as the train approaches each post.
The lamps are already wired up, but have not yet been seen lit in the dark. Currently the last train leaves while there is still plenty of sunshine about. 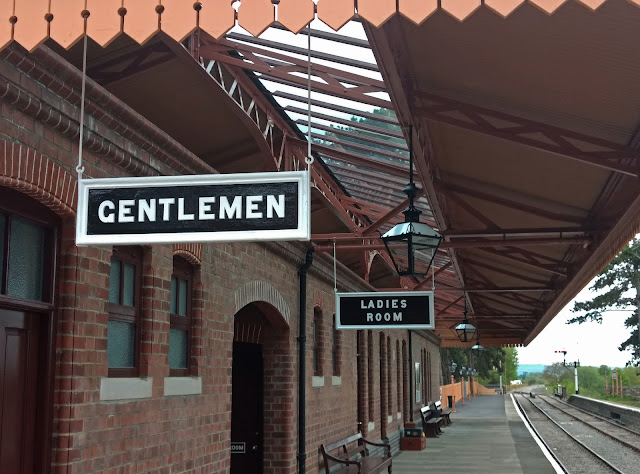 The last picture today shows the row of lamps in situ, together with the first of four door boards. These two are suspended as the non original arch over two of the toilet doors does not permit the use of the usual V boards.
The other two will be BOOKING OFFICE and REFRESHMENT ROOM. The need for the toilet boards was the most urgent, we were told, so we did them first. Both signs are originals bought at auction some time ago in preparation for this job. The ladies sign was once LADIES WAITING ROOM but we didn't think they would like to wait so we took those letters off, so matching the door plate.