Today we had another day on recovering the loop at Laverton, with something over half dismantled by the end of a very windy day. 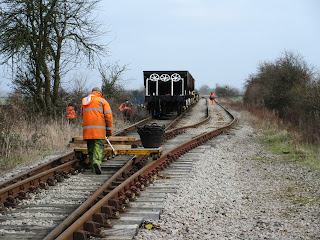 All of the loop had already been de-clipped, and today we gathered up the remaining biscuits and SHC clips and put them in the Landie for storage at Winchcombe. A trolley was used to ferry the baskets around that held the track fastening materials. 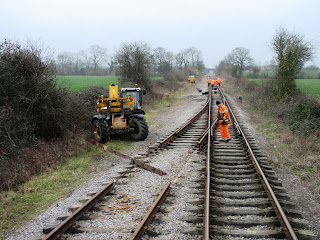 While the trolley was still about gathering up the loose fittings, a second team started taking out the rails - oi ! We were supposed to run our trolley back through there! 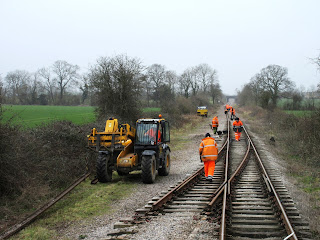 Oh well - we will have to lift it across to the 'main line' - you can't do that with a real train though.
Here the telehandler is dragging back the first rails for storage by the turnout. 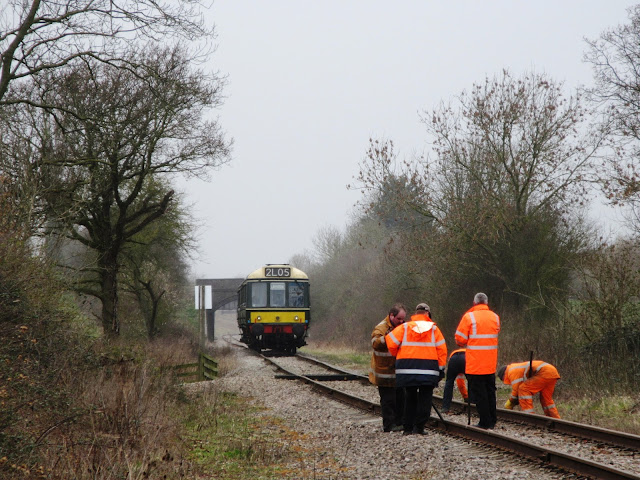 Meanwhile, a third team continued de-clipping the main line southwards, with at the moment every other clip removed. The end of this job is one panel short of the 'breather' joint in the continuously welded rail (CWR) which here is at the level of the DMU, which has stopped at the current limit of operations. The last panel will be a 'fixed panel' in the future CWR extension. 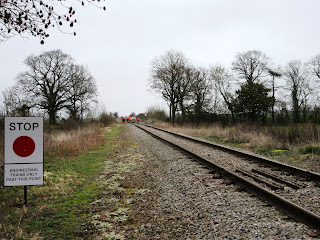 Looking back the other way, we can see the limit of current operations, and on the right, the CWR breather. Once all the new rails are in place and the track welded up, this will become one continuous stretch of CWR right up to the Childswickham Road bridge.

At Laverton Loop, it is the loop (here on the right hand side) that is coming out, for transport to Broadway. It is of slightly lighter section, but good for the station. The main line is 113lbs flat bottom rail, and will stay in place. However, as it will be welded to form CWR, each rail will have to be cut to remove the bolt holes, and shifted south to close the gaps, then welded. The two north and south loop turnouts will be removed, and replaced with plain 113lbs rails. This is the reason for the stacks of sleepers at each end. 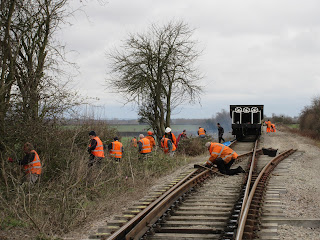 As it happens, the Clearance and PWay gangs are working in parallel at Laverton at the moment.

In the foreground Dave is removing the turnout fishplates, while on the left a large clearance gang is removing bramble growth from the lineside - this reappears very quickly.

For lunch, the clearance gang form a circle of folding chairs in a secluded spot, and eat outdoors. 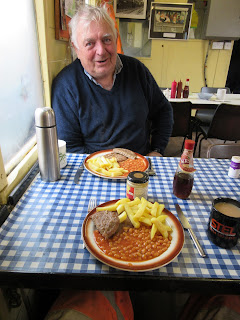 ... make a dash back to Winchcombe, where a bevy of top rated chefs have been preparing a superb meal for us all morning.

Mushroom soup, soaked up with bread and butter, followed by hamburger, beans and chips done to perfection.

This is followed by tea, and a cupcake from Mrs. B's kitchen, this time topped by two very seasonal chocolate Easter eggs. Who could resist? 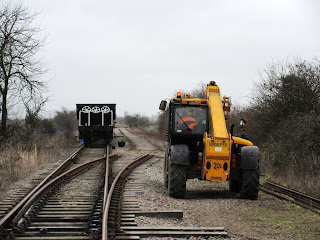 After lunch, back into the job in hand at Laverton. Here the Telehandler has started to extract the concrete sleepers from the space under the rails removed from the southern end of the loop. Another group has de-clipped the curved section of both turnouts.

We are being watched.... 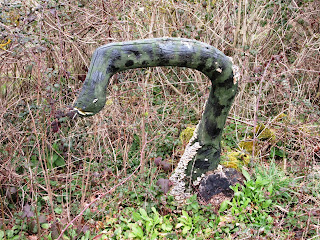 Although a Latin American creature, this Anaconda has escaped from a local zoo, and was surprised from its winter slumber by the noise from the clearance gang. Stand well back ! 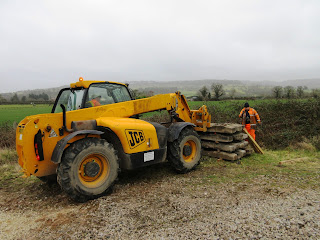 Oblivious to the danger from this redoubtable creature, Alan and 'Bert' continue extracting sleepers from the loop, and stacking them in a pile by the southern turnout, ready for use when this is replaced by plain track. 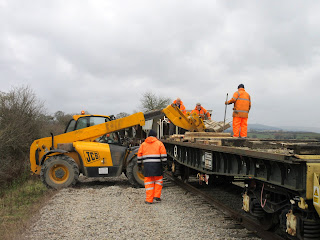 About 60 sleepers are required for each of the two pieces of plain track. After that, the remaining sleepers, now from the central section of the loop, are stacked on the bogie flats, ready for use elsewhere.

After the loop has been dismantled, the gang is ready to work on the actual extension again. The share issue is now open, and the biggest item on the extension budget is ballast and rails to get us to Broadway. Will you help?