A near perfect day for track laying today - warm, not too hot, blustery, skidding clouds racing across the sky.
Today was the day we dealt with the Warflat with the 160 sleepers. 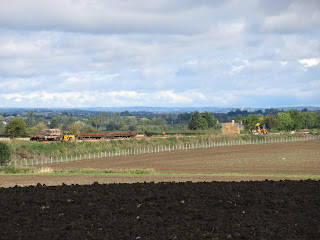 Here is the gang at work beyond Laverton. The Warflat is on the left, with the telehandler next to it, then the flats with rail, and to the right by the haystack is the railhead. The flats have been pushed out over the previously laid 5 lengths. 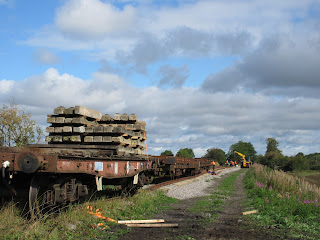 More than half of the sleepers brought in have already been unloaded with the telehandler shuttle. It is standing on the end of the former head shunt - here is the exact beginning of the new rail laid. 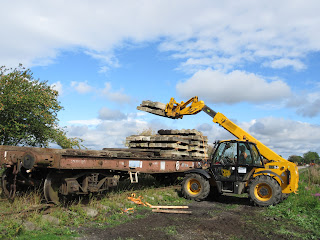 Here is the telehandler, driven by Alan, carefully picking off another load of sleepers. I hope you've got 8 there Alan, because 7 is an uneven load and needs an extra lift with the frame at the railhead. 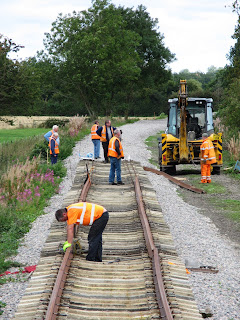 Just before lunch time, the guys were on the third new length. You can see the rail head approaching the start of the curve to Little Buckland. A pair of new rails has just been dragged up, ready for installation.

In the foreground, the undrilled rail ends are being clamped together, ready for welding.

Readers are reminded that the track is only partially clipped up at this stage, until the welds have been made and the track stretched. 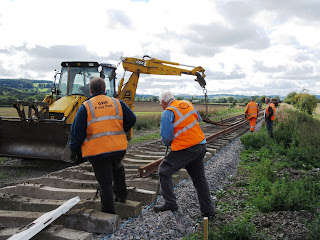 Some of the rails were stored in the centre of the track, and were dragged down carefully to the railhead.

Although we use a set of frames to space the sleepers, there is still a final adjustment that is required, which is done by crowbar as in the picture. In particular, we need to avoid that the joint is on a sleeper, as is the case here. That sleeper needs to move along a bit. 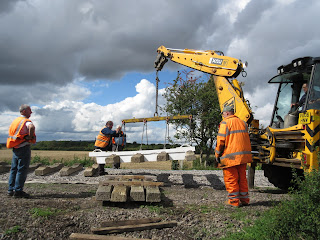 This is how the sleepers are lifted in. When the lift starts, the sleepers wake up and dance about like mad. They are then brought into line by means of the white frames in the picture. Just before the final drop, instructions fly in the direction of Steve, the JCB operator - Malvern, Cotswolds, Winchcombe, and yes, sometimes Broadway. 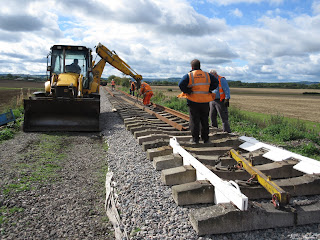 Once 26 sleepers are in place, the rail is lifted in. A little last minute work with the bar will push a recalcitrant sleeper this way or that, so that the rail drops into its allotted place. This used to be so much harder with bull head rail and the old cast iron chairs. 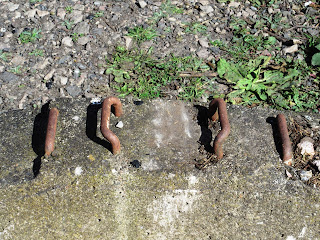 Here is a sleeper that was overlooked by the quality control at the selection stage, but rejected on site.

Can you see why?

Answer at the bottom of the page :-) 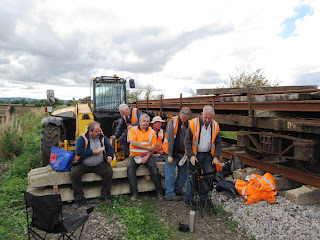 Then it was lunch time.The next supply of sleepers makes a useful lunchtime bench, but, would you believe it, two gangers have brought their own, very comfortable fishing chairs. The wagon with the rail on makes a good shelter from the wind, which is cold when you are sitting still. 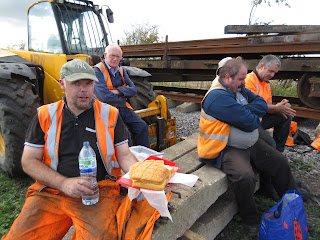 And now it's time for Mrs. B's famous cake, only 50p for unlimited helpings. I managed three.....

A Rhubarb filling today, if I'm not mistaken. Yummy it was too.

Nigel has been told to wait his turn. 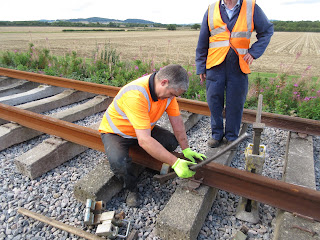 After lunch, more sleepers and in the wake of the track layers, the rail ends are being clamped up here. 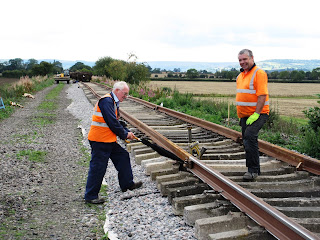 John brought an umbrella, an unusual accessory on the Pway. What could it be for? Well, this is how you push a fish plate against the rail, with out bending over. Got yours yet? 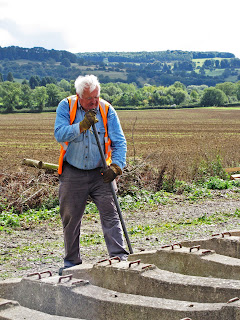 It takes a bit of experience to know just where to put the end of the bar and your boot, so that the concrete sleeper creeps forward the number of inches required, shouted at you from a rail's length away.

Behind him is the Cotswold edge. Beautiful, isn't it? Count yourselves lucky, dear readers, that you can't smell with this blog (we do our best, but...) because the field behind had just been sprayed with pig manure. Didn't we know it too. 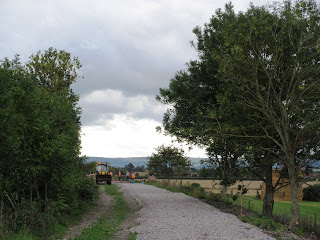 By two o'clock, we were running out of sleepers to lay. Could have done with two Warflats of them really, maybe next time? Walking further up the extension trackbed, this is what the railhead looked like at the end of what was laid today. We had laid 5 panels, and most of the sleepers for a sixth. The point reached was by the footpath crossing, a few yards into the curve towards Little Buckland. Yes, we are off the long straight!

The clouds massing in the distance bode little good. 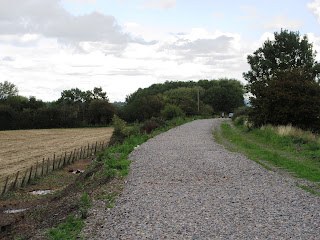 You'll be wondering what it looks like from here in the other direction, and this is what you can see from the mid point of the curve- the telegraph post by bridge 5, Little Buckland. Just over the bridge is our first target, 800m of track laid.
On the left you can see that the clearance gang have moved forward along here. They have almost reached that telegraph pole.

Then came a pretty substantial shower, nearby Dumbleton Hill was almost invisible with the rain. A number of us sheltered behind the JCB, and one of us - ahem - even climbed inside. Cosy here, Steve's world.

Only John continued working in the rain shower, laying out the SHC clips on every other sleeper, for temporary clipping up. Stalwart stuff! 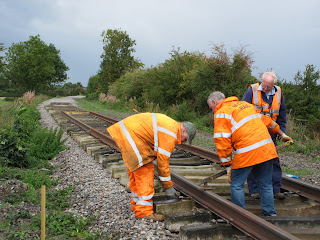 Thanks to John's tireless working through the rain, those clips were all laid out once the sun came out again, and here we are clipping up every other sleeper in rapid fashion. 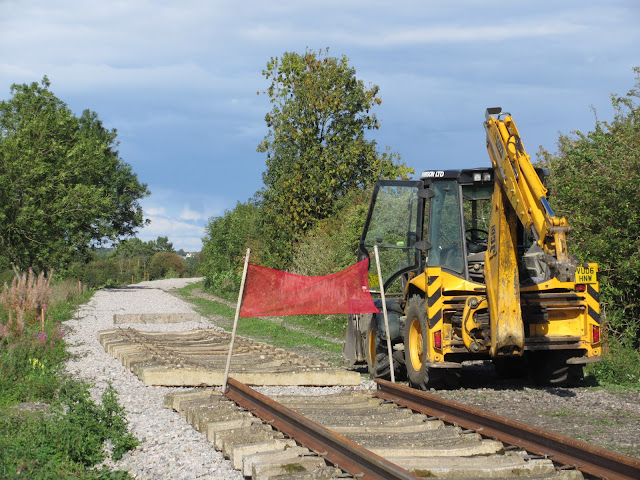 The last picture of the day. Here is the new rail head, and looking into the curve leading to Little Buckland. We could have finished this panel, except for two sleepers that were a bit off.

Oh yes, so what was wrong with the one in the picture? Did you spot it?
One of the loops was a bit bent. The RH one, it leans inwards.

Takes a keen eye, but spotting it at this stage avoids a lot of unnecessary work later on, once it's bedded in under the rail.

The next track lay date isn't known yet, but might be in say 2 - 3 weeks. More concrete sleepers have to be unearthed from the undergrowth and loaded, then the train moved northwards, in between running normal trains and essential maintenance. But it shouldn't be too long now.