Getting ready for more track laying

The three panel gap made to allow the slip repair has now been filled again. Today, a first PWay train ran over it once more, bringing a new load of 160 sleepers on a Warflat. This is one small load of several thousands that we have in store at various locations around the railway. 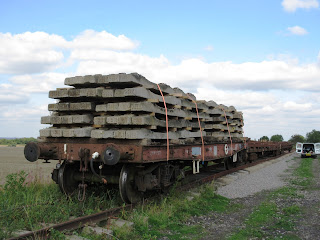 Here is the Warflat that arrived this morning. There's quite a bit of work behind this pile of neatly stacked sleepers, as they have to be dragged out of the undergrowth (the difficult ones first), sorted out for broken or defective ones (some of the hoops can be subtly bent, which makes it impossible to insert the clip once on site) and then stacked with the telehandler. Then it's waiting for a day with no trains, usually a Monday as today.
The wagons have also been shunted, with the Dogfish out by the loop, then the Warflat - ready to remove once empty - then the flats with the new rail, ready for laying. 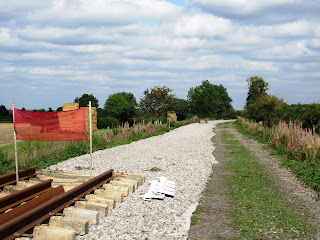 Here is the railhead now. With the 160 sleepers just arrived, we can lay 7 panels, which should bring us up to the foot crossing at the beginning of the curve by the trees. Spacer boards at the ready!

The Saturday gang have been quite busy on other jobs in the meantime, such as relays in the loco yard and maintenance on the running line, but there is a window this Saturday, when it is hoped to lay down the 160 sleepers, and perhaps even some track on top. Watch this space ! We can expect more relays on and off, to fit in between bouts of essential maintenance.

Also on the extension, drainage and fencing gangs have been hard at work. This is less spectacular and often unnoticed, but equally vital as the rails are. We need to keep the infrastructure well drained, and respect our engagements vis-a-vis our farming neighbours. 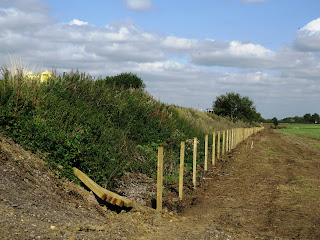 Here is an impressive line of new fence posts, leading away from Laverton bridge. 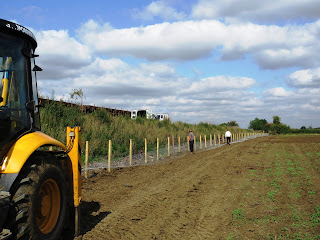 Further along towards Little Buckland, the gang is putting up the actual fence itself  - first a rabbit proof small link fence, then the larger stock fence on top. Contractor's vehicles and the flats with rails are on top of the embankment. 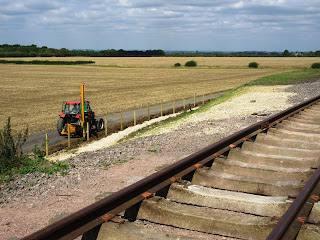 On the Malvern side the contractor putting up the posts was busy, just under the reinstated slip and new trackwork. The white line marks the new drain at the foot of the embankment. 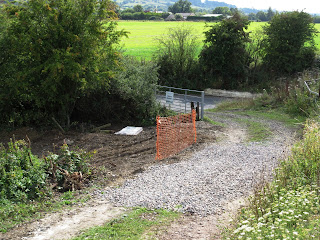 By the Laverton bridge gate, the entrance to the mystery culvert has been found, partially dug out, and the head wall rebuilt.

Finally, how the other half works: 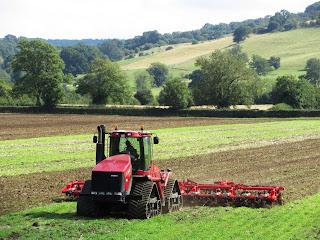 On the Cotswold side, an enormous caterpillar tractor was hoeing the field in a huge swathe. It is rather reminiscent of the Ukrainean wheat fields.

My farmer neighbour once let slip what he listens to in the sound proofed, air conditioned cab of such a tractor - Richard Clayderman..... 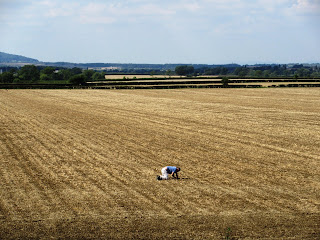 On the Malvern side, things were rather more small scale.

What was he doing there?

We should be able to file a new report after the Saturday relay.
Posted by Jo at 15:12