A quick visit to Toddington yard, just to take a measurement on the top of the yard lamp post, so that the frog on the new six sided lantern will fit correctly. We don't want to find it doesn't fit on the great day. 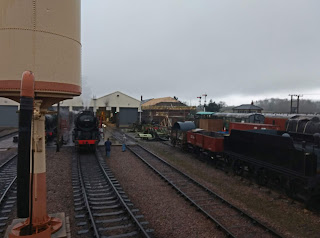 What a day to chose though. It was absolutely bucketing it down, you can just see the edge of a big black rain cloud over the Cotswolds Edge in this picture, taken from the little platform leaning against the post.

P&O is in steam, and despite the non-running season, the shed was a hive of activity.

To the right of the loco shed you can now see the roof of the goods shed extension, in bare wood.


We took a picture of the goods shed extension, but it was so dark on Thursday that better pictures were taken early on Saturday, so that you can see the progress in a better light.


This picture of the new mess room extension was taken from the signal box steps, the same as the previous one a few weeks back. You can make yourself a sort of time lapse then.

The trusses are in, and the brickwork is up to the top of the windows. It won't be long now before the building is watertight.

This is the current mess room of the steam department, and has been since the year dot. It's a Mk1, possibly a BSK.

We've not heard any plans of what is to become of it, once the new and much better mess room is opened, and quite soon, by the looks of it. 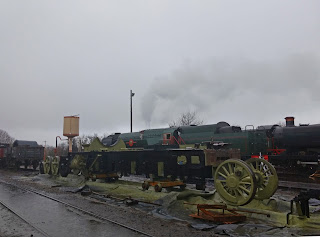 Back on Thursday in the dark, out on the apron in front of the shed was a kit of parts for a steam locomotive.

It looked rather like an Airfix kit, and this is the stage where you consult the instructions, and they say: make sure that all the parts are there.

Actually its 2874, rolled out on accommodation bogies for shotblasting and painting of the frames.


Then pictures taken, quickly out of that rain, and back into that nice warm, dry capsule that is your car.

An ice cold start to the day, with liberal scraping of the car, which is currently parked outside as the garage has become a bit of a GWR poster board manufacturing workshop. 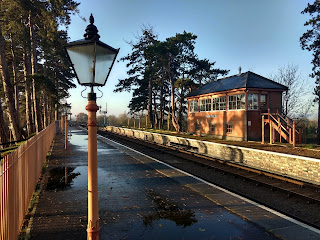 It was just about 0 degrees when this morning picture of the station was taken, with a low sun highlighting the signal box through the pine trees. 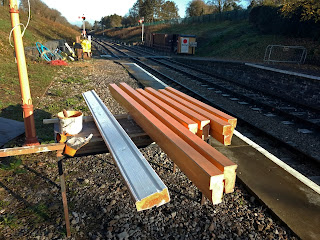 We thought we'd let that sun rise just a little bit more, and allow P2 to be lit and perhaps dried out/melted a little.

Then we went off to our 3 different little work sites.

This is yours truly's. It's 7 of the timbers prepared by C&W, now getting their first layer of undercoat. 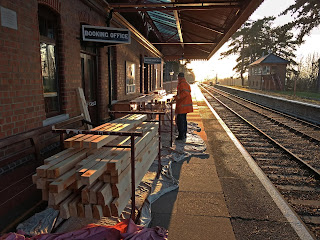 Under the canopy a growing workshop was evident, where picnic tables were stained, benches painted and today, the balance of the timbers from the joiner at Willersey were first knotted, the primered during the afternoon.

By that time, the sun was already low again, and definitely thinking about dropping over the horizon. 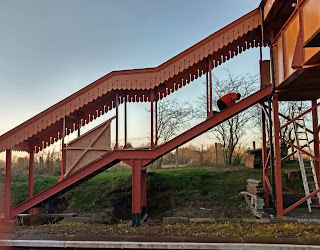 As he can't do any of the woodwork while we are painting the timbers, Neal is carrying on with his Odyssey of fixing down the treads. 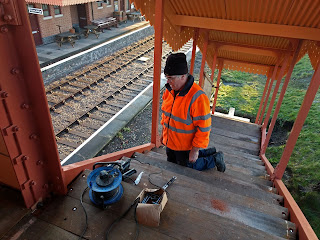 Neal has now completed the P2 landing, turned left and started down the P2 steps. 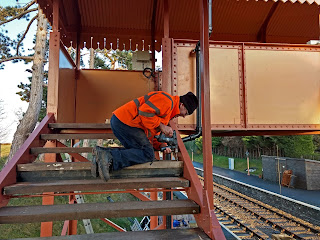 At the end of the day - it gets dark quite early in the afternoon - he was on tread No.6 out of the 28 along this staircase. 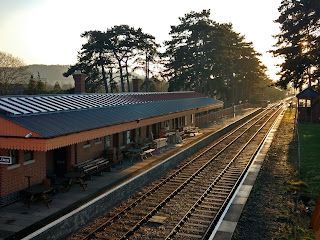 From up on the footbridge you could just about make out John on P1, primering away in the afternoon. He didn't manage to finish his, much larger, pile today, and in any case there is a second coat of primer still to come, the first one being a very thin one, to get the paint well into the grain. 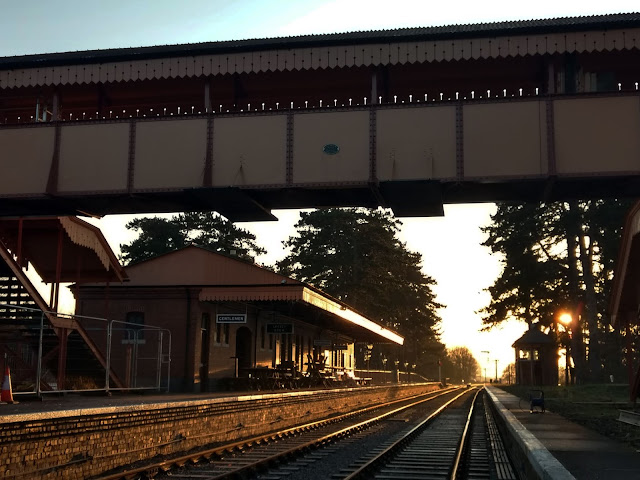 Here's the sun from rail level. The photograph doesn't quite do it justice, the scene was very golden indeed as the sun slowly set behind the signal box. 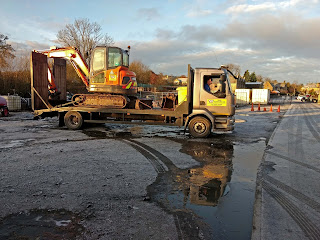 This delivery driver with a mini digger for our Isbourne site contractor made it here OK.

There's ice everywhere, and that remained so in the shadows for most of the day, even if the sun shone elsewhere.

The cold did seem to make it difficult for people to get out of bed this morning. We aim for a 08.30 start on the PWay... 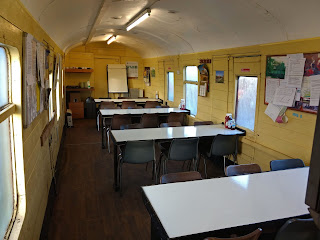 This is 9am in the PWay mess room. Where are they all? 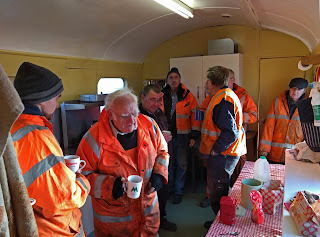 Oh, here. In the pantry, where it's nice and warm. It's like a good party, the place where it's happening is in the kitchen.

If you go in the main room, it's a heck of a lot colder, and if you sit down, you realise that the little warmth there was, that was all in the upper levels, so that once seated, you are at 0 degrees, on your own.

Back to the pantry then. 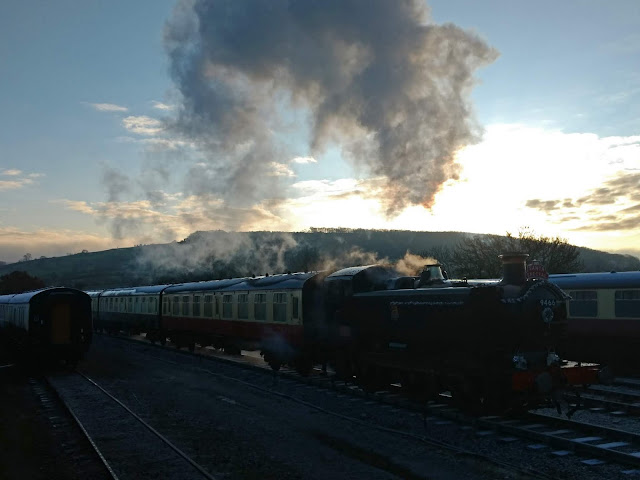 There's a toot outside, and that means a locomotive! A betinselled 9466 steams its way past the Winchcombe bracket signal, to deliver the rake for the first Santa special. The Santa season has kicked off again, at last some more income for the railway. Costs don't stop, just because the trains do. 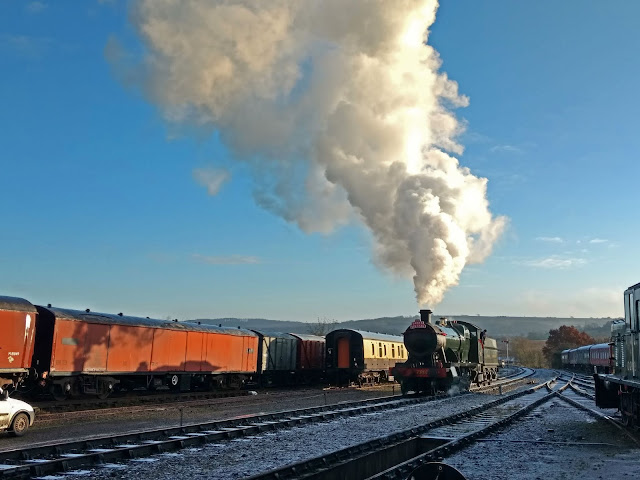 Not long after, the first Santa train was followed by 2807, a surprise as we thought we had heard that the services were going to be run by the two tankies we have. 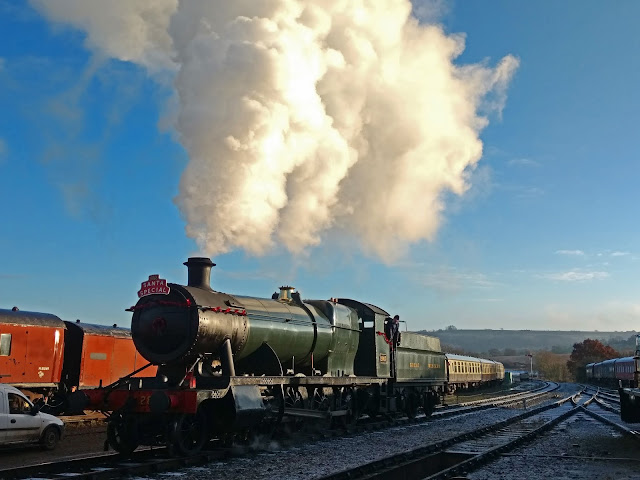 Great steam effects here, with an air temperature of only 1 - 2 degrees C. Rods down, just right for the photographer, and one of the last chances to see 2807 before she is withdrawn for an overhaul.

The PWay gang took the opportunity of this crisp, bright day to go to the embankment south of Broadway to continue sweeping ballast off the sleeper ends. That keeps you warm, but it is just as well, as there is a nasty wind that sweeps over that embankment there.

Yours truly was unable to attend, as the 76077 AGM pretty much took up the middle of the day. More of that later. 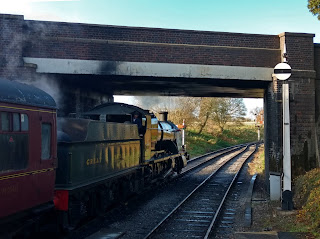 Meanwhile 2807 readied itself for a return to CRC with satisfied (or frightened to death) children from the first special.

Standing here on a deserted P2, it was very atmospheric to see a steaming train with the heating on, and the mournful sounds of a brass band wafting over the tops of the carriages. 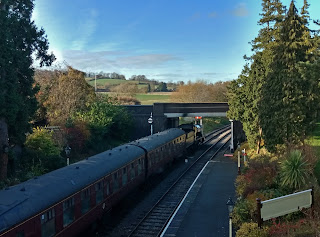 Here is the train, a few minutes before departure, with the fireman struggling with a stiff and ice cold vacuum hose to reconnect the brakes after the loco had run round.

The last couple of pictures are from Toddington again. We had a delivery of cotton sheets to make, for the department's oily rags wheelie bin. 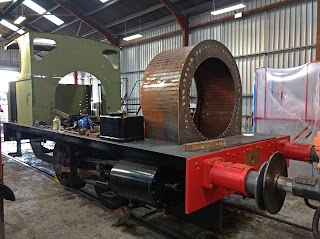 This is Peckett 'John', looking a lot better after the new smokebox was lowered on to the frames. Outside are pieces of the boiler and firebox, much of which will be completely new (well, certainly the barrel and the firebox sides, as far as we could make out, perhaps more still.) 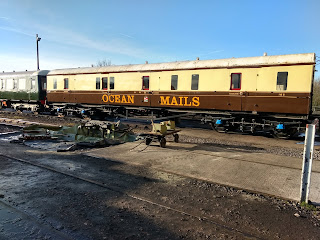 During this running season a few scarce volunteers from the RATS team are doing a repaint of their exhibition coach, the only actual GWR coach on the whole railway.

The OCEAN MAILS inscription is new, and we rather took to it.