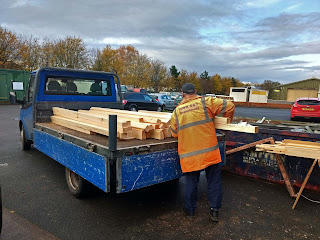 Friday we were off to Willersey. The joiner has worked quickly, and in just a week we got all our timber back.

Here we are loading it all back on the truck again.

The joiner still has the Usk door. There, slightly more extensive surgery is required, and he has recommended a new frame. It will be ready shortly though. 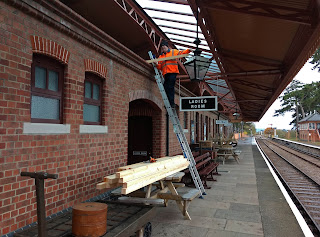 Back at Broadway, just a mile down the Honeybourne line trackbed, and we need a place to store and treat this timber. We lost the use of one container, which has been turned into a spearhead fencing manufacturing base.

Our alternative storage site then is the roof of the station. We're going to have to treat and paint all the wood up there. There's plenty of room though. 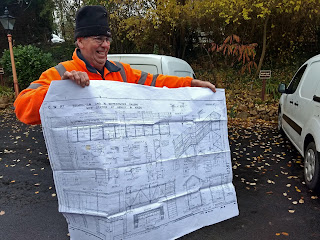 In the afternoon we had 3 visitors from the big railway. They showed a great interest in the HIA bridge, and with their questions they were at the right address with our Neal.

Footbridge? We have the original plans here... No photographs though, they are secret. 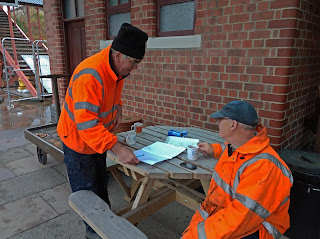 After some vigorous painting (in container 1), applying preservative (up on the roof) and reaming a last tread for the P2 upper landing, we treated ourselves to a cup of tea and a biscuit.

The paper on the table is a draft design for the P2 building. No, you can't look yet - it's still at the discussion stage. But the build is in good hands. 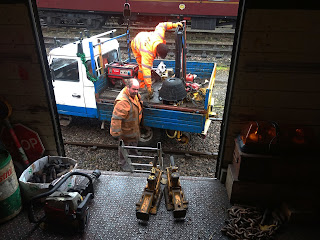 It was a day out on the track. We were off to Gotherington skew bridge, where the refurbishment works a couple of years ago have settled down and left a couple of dips in the track.

We needed to get the big guns out - all the Duff jacks we could carry, and then the bonus of the slew jacks, which are fiendishly heavy, as unlike the Duff jacks, they are made of solid steel. 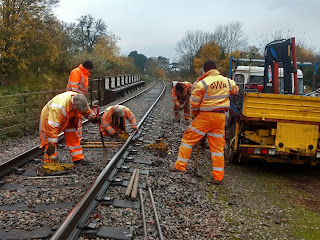 The principal culprit at Gotherington was this insulated joint, right by the bridge. In the picture Bert Ferrule is examining the joint, while the gang of 10 today get out the remaining tools needed here. 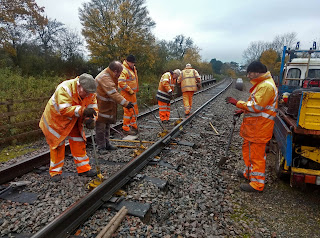 We kicked off with a row of the slew jacks, dug in, while Bert Ferrule walked off to eye the operation in from a short distance away.

The slew jacks lifted and pushed (where have we heard that slogan before?) and had to be dug in a second and third time until we got the desired effect. 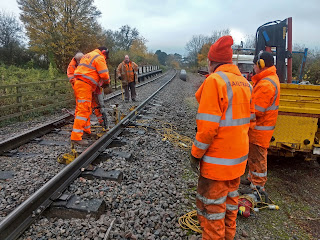 When the track and curve were back in the right position, the gennie was started up and Dave and Bert Ferrule got the Kangos out to hammer ballast into the voids that the lifts created. 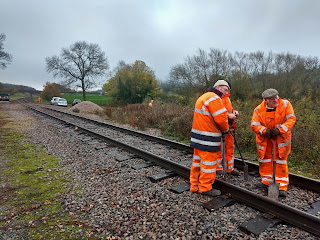 Behind us we heard the sound of strimmers and a flail, which was the drainage gang in operation in and around the skew bridge yard.

Wonder what they were up to? 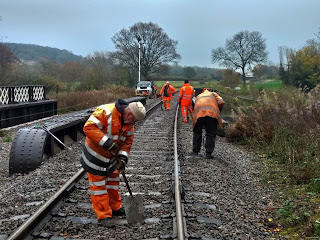 After a while the gang split into two, with a section on the Kangos, and a second further along, clearing sleepers of the excess ballast left after the bridge repair works.

The weather was drizzly but not too cold, so bearable. We returned to the mess coach for warmth, tea and our snap. Some lucky ones found a left over breakfast doughnut, and ate it quickly before any other interested parties had the chance to put their hand up. Gotta be quick in this game.

After lunch the forecast rain seemed to hold off, so we ventured outdoors again, but this time for more shovelling just south of Winchcombe.

The Landie brought a whole load of shovels and ballast forks to the kitchen end of the station building, where a locked gate prevented the supply of shovels reaching those on the trackbed desperate to use them. 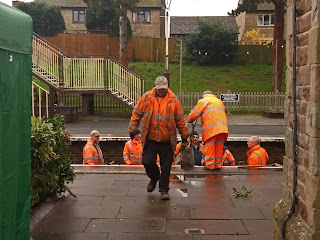 The wicket gate was locked with a combination padlock instead of our standard key, but after reflecting on possible codes we had the idea of trying the code for the main gate. That would be logical, and it worked too. Open Sesame... 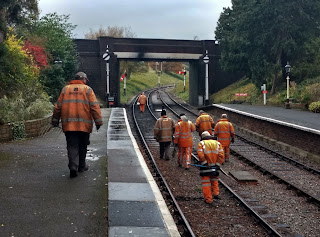 Armed with the necessary shovels, it was a bit of heigh-ho, heigh-ho, as we walked up the trackbed to the bracket signal, where too much ballast had been observed. 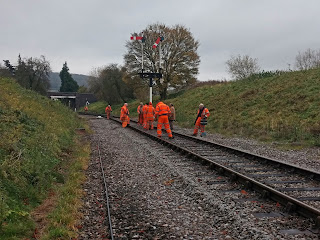 We spread out and started shovelling, there was nothing for it.

It's not the best activity, straight after lunch, but on the other hand it does combat that tendency to gain weight at our age. 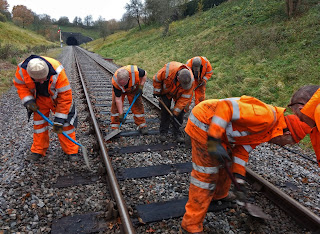 We slowly worked our way up to the tunnel, and it is true that the track looked a lot neater after our passage and more importantly, the fixings were visible to our track walker. 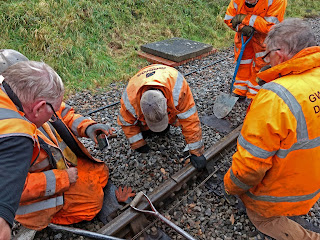 Dave (with cap) is a wizzard at finding cracked fishplates. He must have shares in the manufacturing company where we buy our replacements...

This is a new one, not very obvious to the casual observer, but Dave spotted it nonetheless. It's just a single break (as opposed to both fishplates) and will be replaced before the next operating season starts. 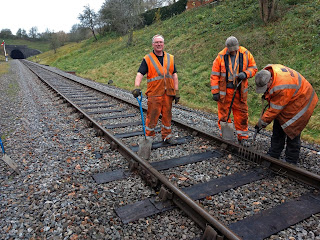 Shovelling ballast requires a lot of energy and despite the drizzle several started to shed coats and hats. Tony here is in bare arms, and it's the last week in November!

The fishplate in the foreground marked the limit of what we were going to do today, so you can see the relief in Tony's face as he can finally stand upright.

We're gearing up to assist with the drainage repair work on Stanton viaduct, and we should know more about the modus operandi soon, for the work due to take place in January.


PS We found a BMW car key on the trackbed, just by the Greet Road bridge. The fob is Dick Lovett. We are mystified how it could have gotten there. We don't recall seeing it on the way up after lunch either.