A twist in the tale.

An interesting morning, much of it spent talking to a local joiner who came to give us a quote for the shaping work required on the timber for the footbridge. It turns out he used to live locally, and in the 1950s his mother cycled to Broadway station to take the train to go to work in Cheltenham. So we got off to a good start straight away. 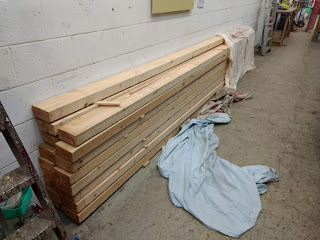 This is some of the timber involved, a big pile of 4.5m 6x3s currently given temporary accommodation by C&W. More is stored elsewhere, so it's no small job. If we get a friendly quote and a little bit of budget, we ought to be able to relieve C&W of this large encumbrance very shortly. 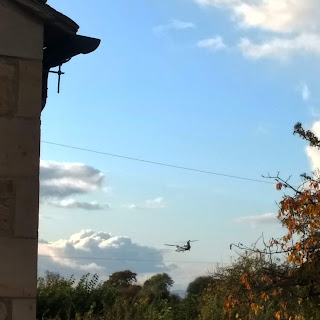 A Chinook flying low is always an occasion. This one was at tree top height, heading for Broadway. They're tricky to catch on camera, as you get very little warning and then they are upon you. No doubt this is good training for an event where unfriendly people might be shooting at it, and we mean with guns, not cameras! 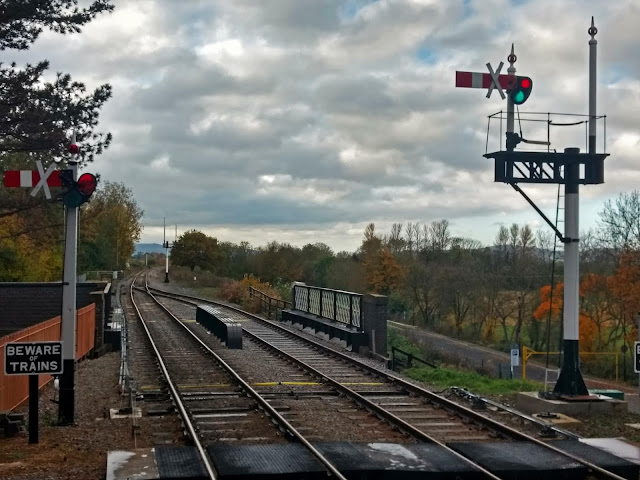 Broadway Friday morning saw a new arrival - another bracket signal. You can read all about its installation on the S&T blog; this picture was taken off the end of the platform. 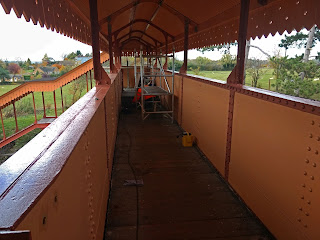 After the agreeable meeting with the joiner we got down to work, although the painters were a bit reluctant as it was freezing up there on the footbridge.

It was a northerly wind, and it fair whistled though the opening under the dagger boards, right where your legs were while painting. 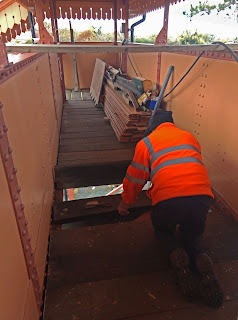 Neal made brilliant progress with the treads. He's about two thirds of the way along the centre span. We just need to move that pile of tongue and groove boards - again!

After that, maybe down the other side? It is possible that the timber for the sides will be ready soon, now that we are looking at paying for it to be done. Neal can then start making the joints that allow it all to connect together.

Well, for some. Yours truly spent the morning in a meeting at Winchcombe.
Nice and dry. With biscuits and slides. Heating on...

Meanwhile, out in the real world, 10 brave men turned out in near freezing temperatures, knowing that heavy rain was also forecast. 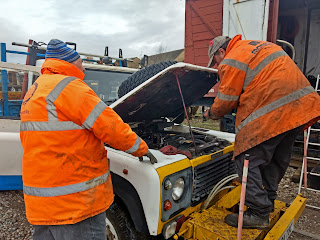 Before even starting, we had to check out a reported warning light on the dashboard of the blue Landie, with a suspected low oil level.

It needs two to lift up that bonnet - it has a socking great big spare tyre fixed to it on top.

The oil level looked OK, but better to have checked.

Two Landies then set off to repair a twist at Didbrook, which had a Temporary Speed Restriction on it.

Notice the upturned collars and hats of these two (Dave and Neil) in the Landie. It's cold out there, and rain is coming soon. Neil has his hands over the warm air vents, in the vain hope of catching some relief from the still cold engine.

Due to the half day meeting, yours truly was unable to take working pictures from the Didbrook twist. But, as they do in the Dailies, we have some stock pictures of this activity, as sadly it is an annual event.

These pictures are by John Lees and were taken in 2007, 12 years ago.  We've posted some more of them, which you can see here: 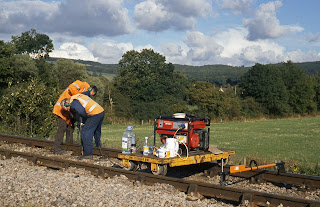 The weather on that day - 27th September 2007 - was rather more acceptable, pleasant even.

Having jacked and sighted the track, you can see two members of the gang packing it with kangos, powered by the portable generator. We still use the same one today.

It also powers a kettle on the Permaquip.... 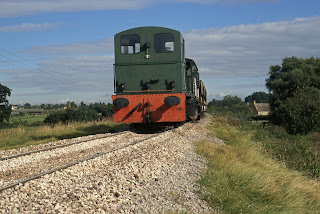 Diesel shunter D2182 came out to the site once it was packed. That's the C&W shunter today, with that pretty 'copper cap' chimney you may recall. 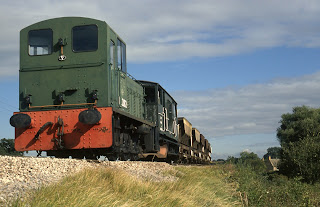 D2182 had a rake of 6 Dogfish in tow. We used the same ones building the Broadway extension.

It's the Cotswolds side that keeps dipping, so if you keep packing it every year, eventually you're going to need more ballast. 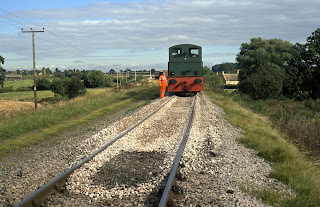 This is the result of the drop in 2007. Today we did the same packing, plus a slew to get the curve back where it should be.

The gang then returned to the mess coach at 12.30, soaked to the skin. A lengthy, tea fuelled lunch was held. During this time the rain hammered down on the roof ceaselessly. We checked the weather forecast and a radar image, and the best that could be hoped for was another 2 hours of the same, before it got dark.

We decided to call it a day. We had wanted to do more (another twist at Gotherington) but it really wasn't on today, the third Saturday with heavy rain in a row. But we did get something done, and had the satisfaction of removing the TSR.