Damp but warm - working on the footbridge was actually quite pleasant. Tomorrow the storm!

While having our tea in the mess hut this large helicopter flew overhead. 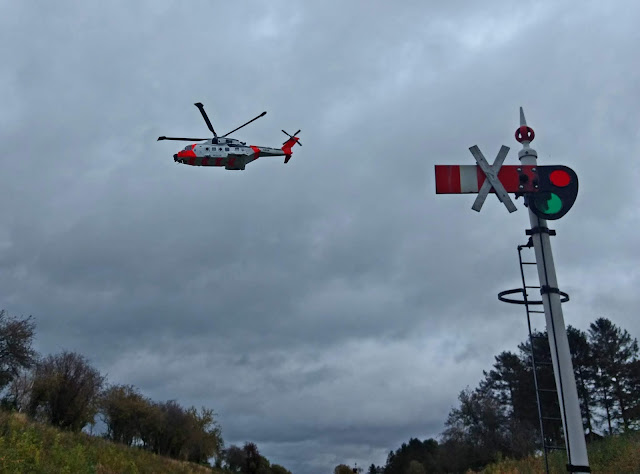 With a bit of research on the internet, we found an identical example, but belonging to the Norwegian Air Force. The type looks like at AW101 Merlin. Norwegian? At Broadway? Surely not.

Anyone know any more? The tips of those blades look interesting. Other helicopters don't have them, what are they for?

The heli flew off in the direction of Tewkesbury, a well known flooding area. Maybe there was a job for it there? 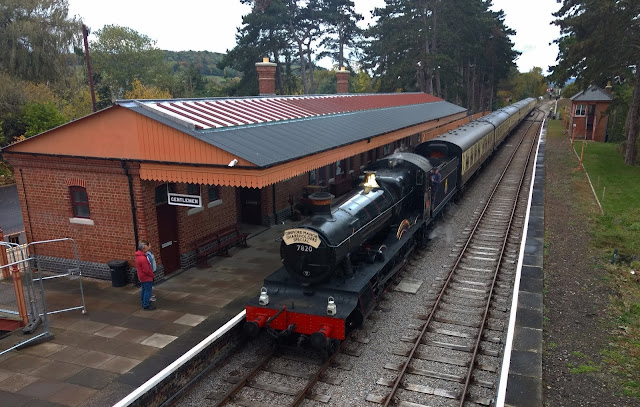 We continued with painting the centre span roof, and cutting treads to size for the P1 upper landing.

We had a special in today, but it wasn't Fire & Drive, it was a shareholder's special for shareholders of Dinmore Manor Ltd. 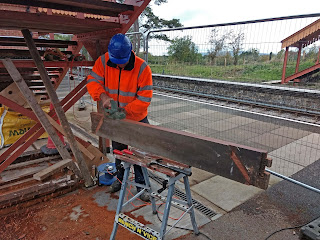 When it had gone again, Neal carried on with the treads. The last one on the landing is a bit too wide, so we see him here shaving a bit off the side. The wood is very hard and would make beautiful furniture, such is the colour and quality. It makes you want to slap some teak oil on. 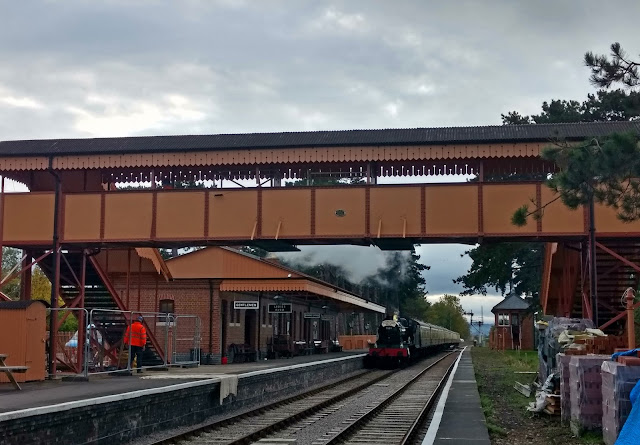 After lunch the shareholders came back for a second go. There were quite a few of them. Wish we had that many for 76077, we could do with more. Please help and become a shareholder if you want to see our Pocket Rocket up and running.

You can help here:
Help our Pocket Rocket 76077 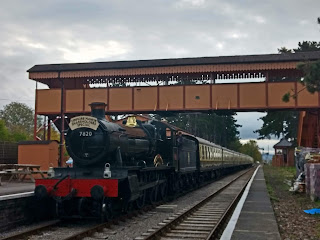 The last picture, as 7820 emerged under our footbridge, is a bit of a curate's egg:

Composition: Good.
Colour: Good
Exposure: Good
Focus: Errrr.... must have been very excited when the shutter was released, the picture is blurred due to movement of either camera or locomotive.Well, locomotives do that.

It wasn't that bad actually, it was worst first thing with heavy rain and gusts, which drove us indoors to study tea and, for once, a very large supply of doughnuts, about three each at a rough telling. Can't eat all them! Got through them in the end though, even if it took till lunch time. 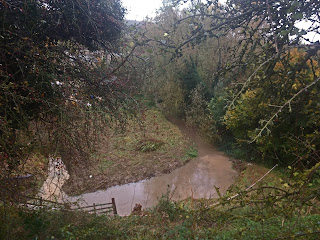 All the water that came down made the Isbourne rise up somewhat, visible here upstream of the tunnel under the line by the B4632 bridge.

You can see streams of different coloured and muddier water coming in from feeder drains, left, and right from the direction of Churchward House. 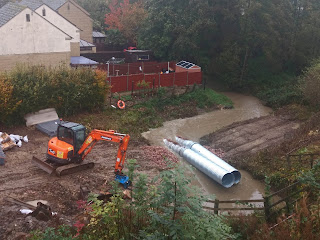 On the downstream side the contractors had started to lay in the large diameter pipes that will form part of a bridge across the stream. 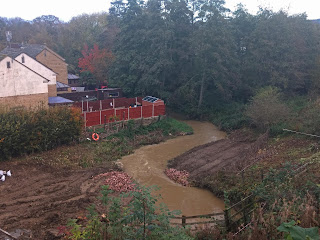 Round about 10 am the rain ceased, and we set off for Toddington to check out reports of a non-working turnout in the loco yard.

Pulling the lever quickly revealed that the mechanism wasn't locking. 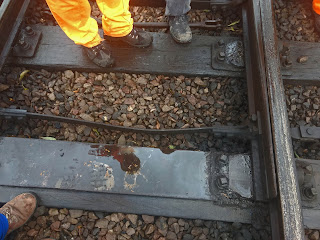 Then the reason why became evident - the stretcher bar was bent, and the blade no longer closed tightly.

The turnout had been run through, while it was set for the other direction. 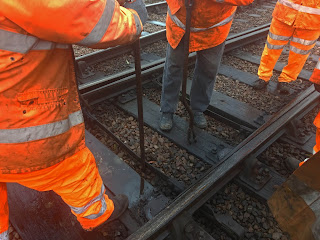 Luckily this hand operated point was simpler than the one run through at Broadway (no locking bar, or other operating paraphenalia around it) so Bert Ferrule gave it a hearty tug with a bar to try and straighten the  stretcher. 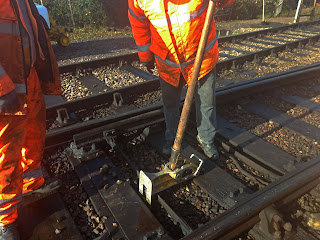 This simple cure was a bit too simple, but we had come well armed - a trip jack soon persuaded the stretcher bar to return to its original shape. 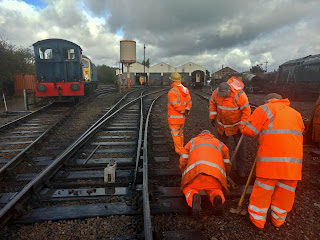 By straightening the stretcher bar the blade was able to fit tightly again, but the locking mechanism continued to be a little reluctant to lock.

By a miracle of clever design it is possible to move the blades in alternate directions, but always with the same pull of the lever.

With a little adjustment we were able to  adjust the locking mechanism, and we then did a quick tour of several other turnouts, which Mark from the loco dept, pointed out had worked a little loose.

We had anticipated that too, and brought adjustable spanners. Problem soon sorted.

Prior to returning to the mess coach at Winchcombe for lunch, two of us had a quick look at the new mess room extension of the goods shed going up. 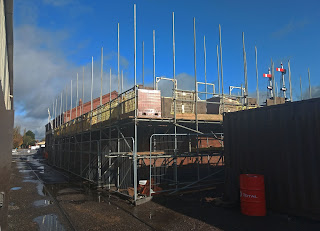 This is the view from the unloading road.

The floor (ceiling) is in, and work has started on the first upper floor. Initially this is in concrete blocks, with a brick skin to follow.

Three windows frames are now visible on the southern end. 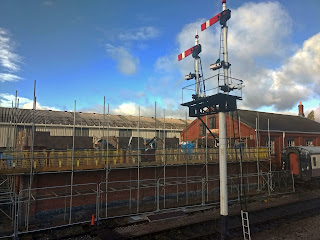 To compare with a view taken a few blog posts ago, we took the same view again from the signal box steps.

Concrete blocks have reached the tops of the windows here, several being prepared with temporary frames along the Cotswolds side.

With a bit of luck they should look like the goods shed windows further to the right, when finished. 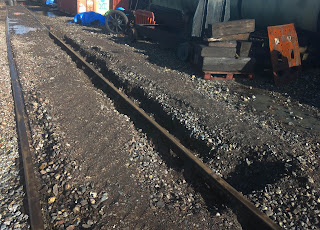 Also on the unloading road is this trench, dug out last week. A cracked rail was reported here, but with the crack running along, and not across, the rail. That is unusual.

The yard rail is the oldest we have on the railway, and was well past its sell by date even when we got it in the early 1980s. But in 40 years of volunteering we have never seen a crack running along the head of a rail like this. Very odd.

Of course this is only the unloading road, little used and even if so, only at very low speed. A replacement rail has been sourced at Winchcombe and now awaits bringing up to Toddington by rail. 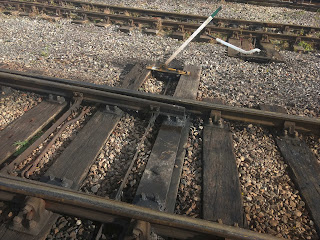 Here's that point mechanism sorted out, and ready for use again. The stretcher bar is now straight. 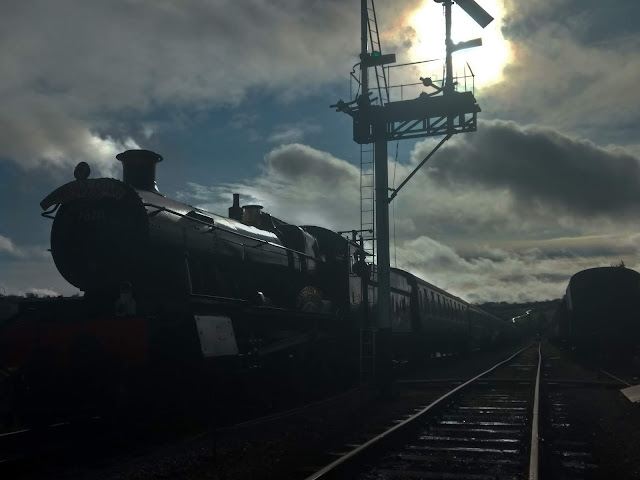 Today was the second to last day of regular trains on the line this year. Still reasonably full, we were pleased to see.

Here Dinmore Manor has just returned the section token to the Toddington signalman. There's a bit of hope in the sky too, maybe we could do something this afternoon?

We returned to Winchcombe for lunch.

With the rain still holding off at the start of the afternoon, we decided to have a go at recording the turnouts at CRC. To do this, and not needing any heavy tools, we thought we'd take the train.

The half hour waiting at Winchcombe station was fruitfully spent obtaining takeaway drinks from the Coffeepot.

You gotta take them when you can. 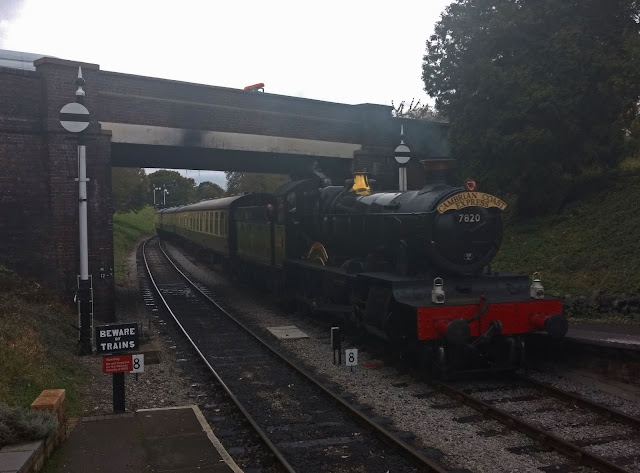 Prior to our train south arriving, we saw Dinmore Manor roll in from the south.

We boarded our train, headed by Foremarke Hall,  shortly afterwards and headed for CRC. There we took the short walk down the trackbed to the northern turnout, which we measured up while darker clouds started to form.

Looking at our watches, we reckoned the 90 minutes we had between the trains was just enough to do both northern and southern turnouts, so after completing one we hurried to the other.

Now it started to rain again.

We finished the southern turnout at CRC as the rain got heavier, and our train home appeared on the horizon. Brilliant timing. 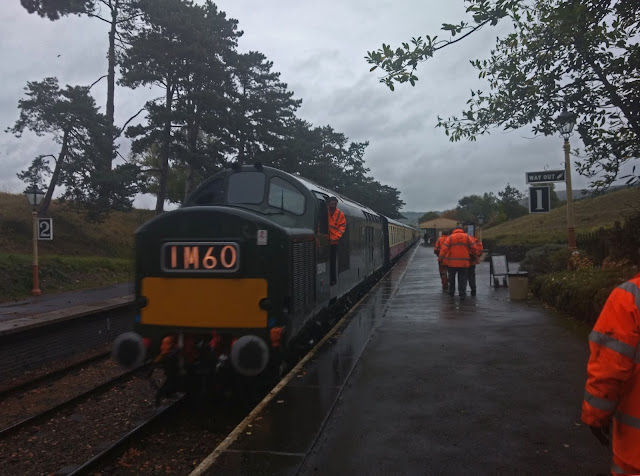 The Growler growled into the station, and we thankfully boarded the train to get out of the rain at last.

With the wind now much reduced as well, we were able to change into our civvies in the Winchcombe car park, while more or less dry. Despite the 'heavy rain and strong gusts of wind' forecast, we had a very satisfying day.

Next week - we deal with the twist at Didbrook - for the nth time.