Saturday along the line

No Friday work this time, due to a doctor's appointment.

Saturday then. Cold and rainy. In fact terrible to start with, and for some reason our Mk1 mess coach had no electricity, so we sat in the dark and warmed our hands on mugs of tea. 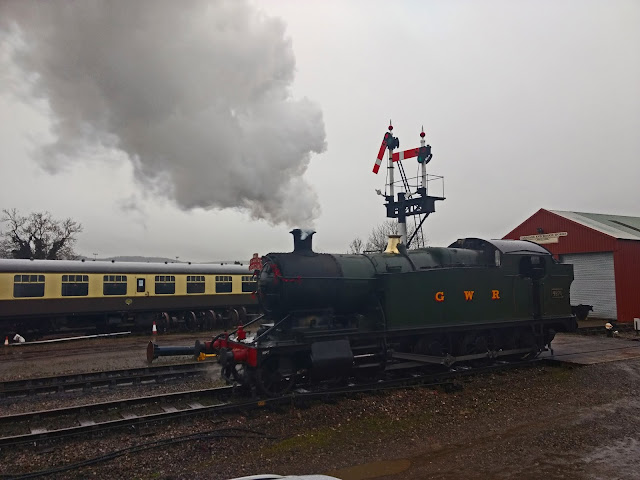 A locomotive passed by in the rain... 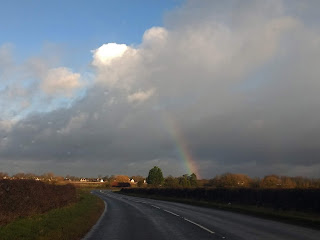 After a good hour, it suddenly stopped, so we set off for Toddington. We had two things to do to prepare for our two winter works jobs.

On the way to Toddington, we almost caught up with the rain, which was heading north, followed by the sun, which created this rainbow with the water still coming down over Toddington. 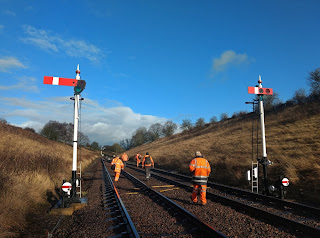 Once at Toddington, we gathered together, walked past the DMU waiting in platform 1 and headed out towards Stanway viaduct. 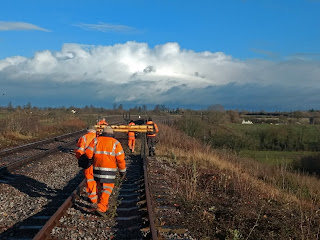 As we neared the 15 arch viaduct, the evil weather could be seen retreating over the northern horizon.

Strangely enough, the southerly wind was not warm and our weather app announced that 6 degrees C would feel like 1 degree. We could confirm that, as we headed out over the increasingly high embankment, along the Toddington north siding. 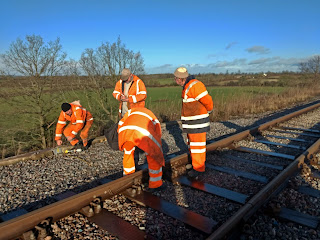 Starting early January, we will be lifting part of the track over the viaduct, so that the ballast can be removed, the inspection pits cleaned and, if we got this right, new waterproofing will be added to the arches.

Our role in this essential work is the removal and subsequent replacement of the track. 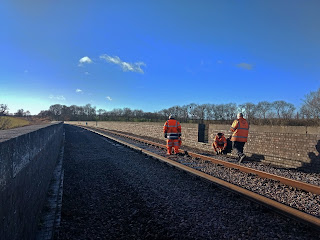 The purpose of today's sally forth was to measure precisely the position of the track along the centre of the viaduct. When we replace it in due course, we need to put it back in the same position (along the centre line as before) so that the ends still meet. We can't be taking a short cut and end up with an inch too much, or worse still, go wide and find we are a few inches short. 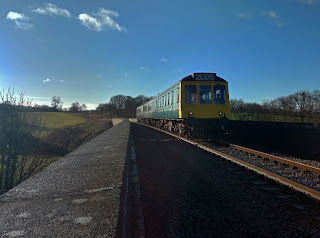 The DMU based Toddington - Broadway Santa specials continued as we measured the position of the track along various points. 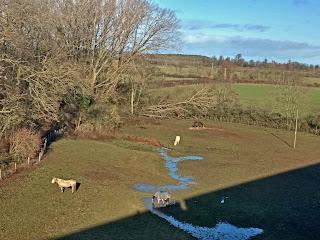 Down below us, as someone pointed out, the ground seemed like the first world war trenches, all sodden and brown. Four horses nibbled away at any grass that was still visible. 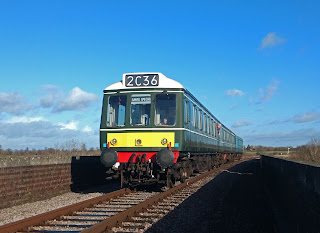 A short while afterwards the Santa-DMU came back from Broadway, this time facing the sun. 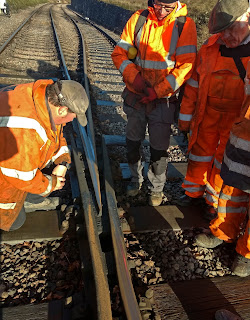 On the way back we stopped to examine a crossing at Toddington North. We keep careful tabs on our track.

We walked back through Toddington just as the DMU returned with its happy crowd, each child bearing a large bag of goodies. And it wasn't over yet, as people were seen to be directed to a mince pie coach for more treats. 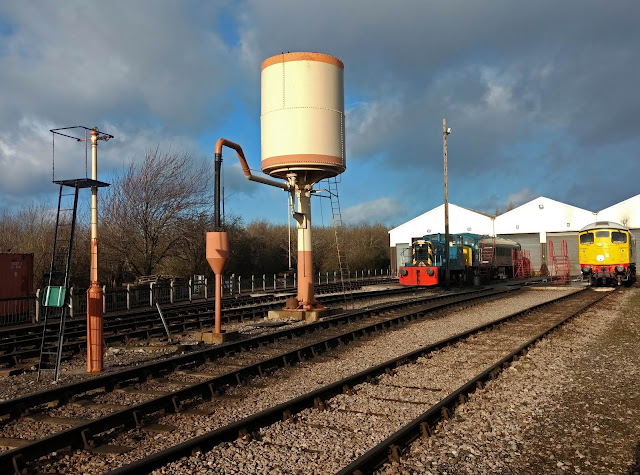 Before returning to the mess coach for lunch, we had a quick look round the yard. There's always something going on.

The yard lamp post on the left is of course one of the two we rescued, restored and planted earlier in the year. It will add greatly to the period atmosphere of the loco yard behind the shed, together with the water tower.

After much discussion with a heritage consultant and a specialist manufacturer of period lighting we have agreed on a design, based loosely on the one at Minehead, and two lamp tops are being made as you read this. We hope to be able to mount them, and finish off this delightful little heritage project, within the next couple of weeks. 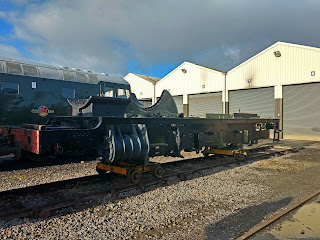 The frames of 2874 were out in the sun, on their accommodation bogies. They have been shotblasted and painted in a makeshift tent, already removed again. 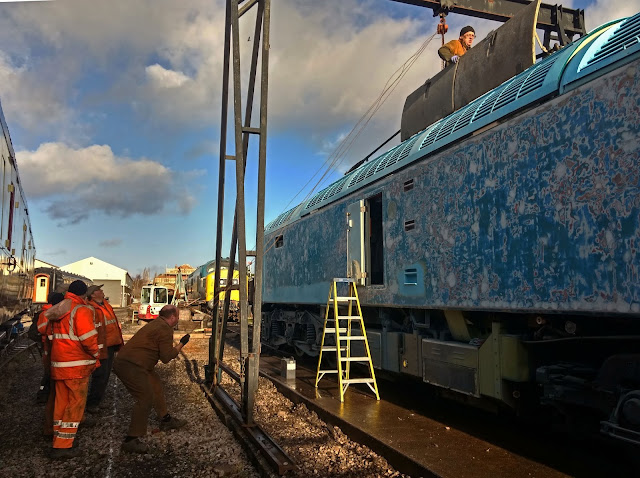 A very interesting scene was the replacement of the engine room roof on 47 105. 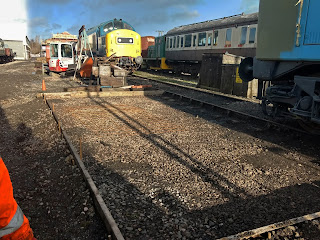 Just behind the A frame the ground has been cleared for a concrete base, which we understand will support a new diesel tank.
We had a quick peep into the diesel shed, which was open and with one road cleared of locomotives. 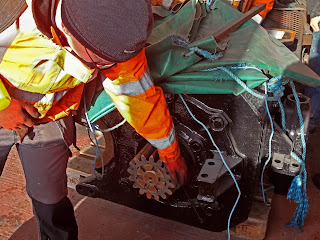 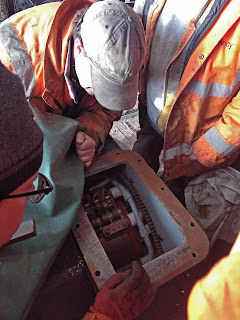 A member of the department was happy to show us this large block of machinery - Leigh has put his hand to show the size of the pinion - and this turned out to be a refurbished traction motor from the 'French' class 20 that was dismantled for spares. The lid of the commutator was taken off to reveal everything refurbished inside.

Outside by the diesel mess room was a pair of worn out traction motors, just to show the difference: 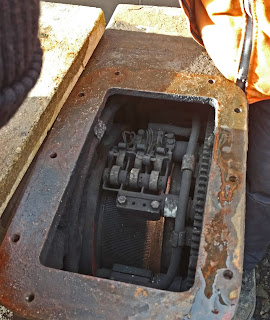 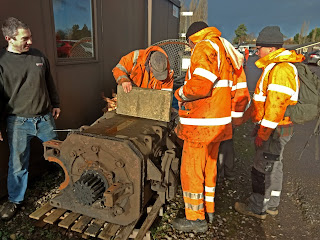 The commutator was dirty and heavily worn, caused by the wrong type of bearings fitted when still in main line service. 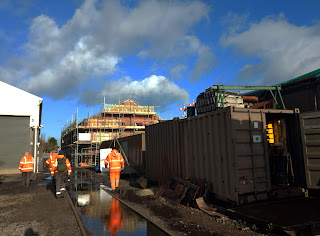 Then it was back out of the yard and off to lunch, passing by the goods shed mess room extension. In the picture the gable end is under construction, and while the roof is not yet on. It is hoped to do this before the end of the year. 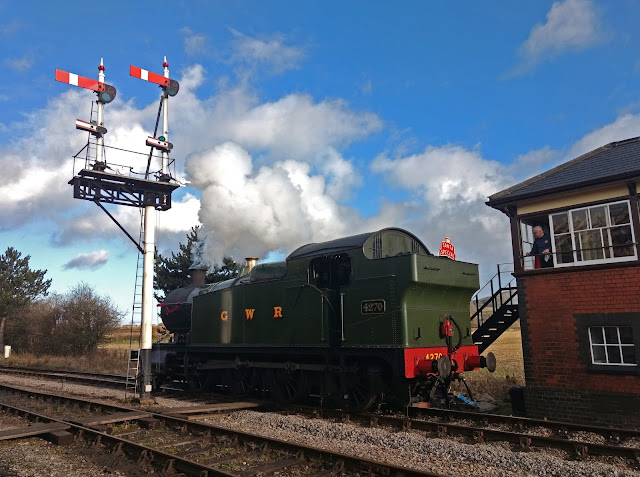 A quick peep behind the containers revealed 4270 returning from Winchcombe, having just returned the token to the signalman, who can be seen looking out of his box, the traditional rag in hand.

Lunch in the mess coach was still without electricity, but at least it was now sunny, so that we could see what we were eating. 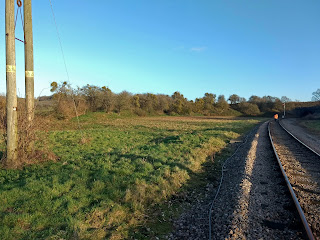 After lunch we carried on with the second of our preparatory jobs for the winter works, examining and marking for replacement the sleepers leading away from the Greet tunnel mouth.

The flat area on the left was used as a quarry for the long embankment towards Stanley Pontlarge, and may have been the site of the Greet navvy village. A nearby road bears an echo of this: Working Lane.
Getting there, from roadside to trackbed, was no sinecure. Wasn't there an access point here somewhere? 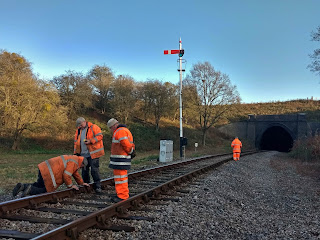 We also knew of a cracked fishplate in this area, one that we are observing as the crack is still small and manageable at this stage.

Just checking then - no change from last time. Dave F (on hands and knees) is in fact the section track walker here, so he knows his faults. (the railway ones, that is). 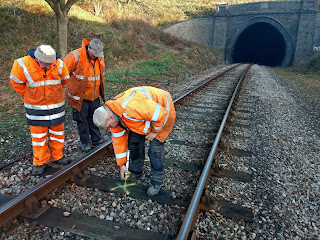 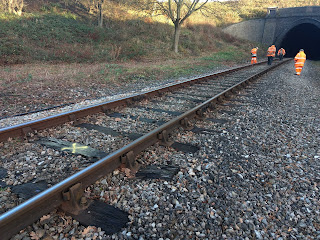 Any sleepers obviously rotten, or with evidence of moving cast iron chairs, are marked for replacement.


An example of a sleeper that needs replacement is this one, broken upwards at the end.

A single unserviceable sleeper is tolerable at our line speeds, but we obviously need to stay on top of this, hence the replacement programme scheduled.


As the light began to fail we returned to Winchcombe yard.

In the station the Santa arrangements were in full swing, so yours truly went round the back on to P2 to see if an atmospheric photograph was in the offing.

It wasn't long before the crew saw the lonely figure in orange, pacing up and down. 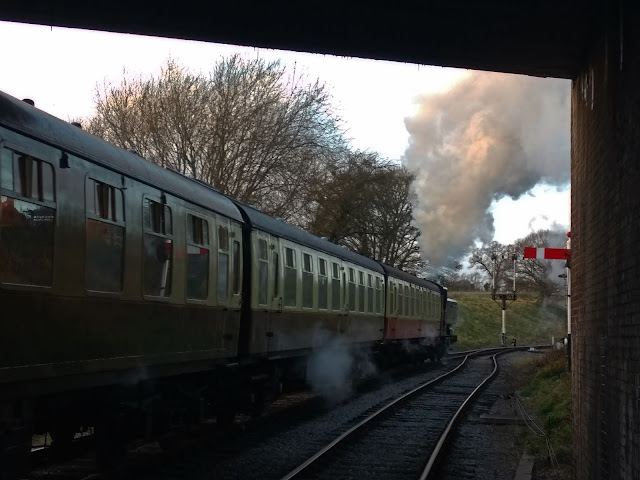 Here is the atmospheric picture. Our visitor 9466 pulling up the hill towards the tunnel, with an 8 coach train. Was it worth the wait? 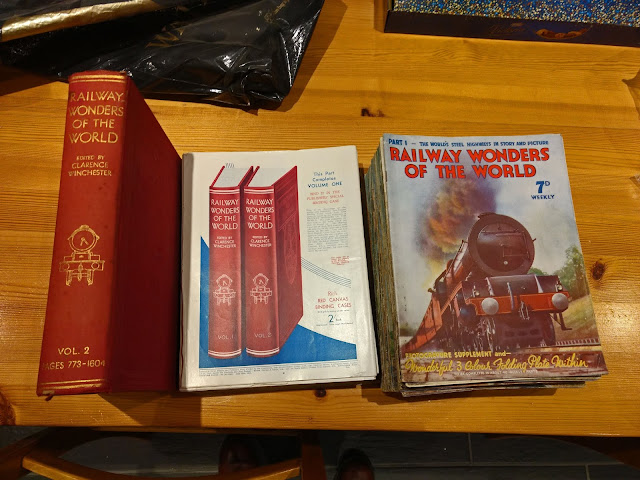 To raise some funds for the railway, would anyone be interested in these fascinating sets of collector's magazines from 1935/36? We have two sets available: On the left, a bound volume two and 24 issues (which make up all of volume 1), and on the right, a complete set of 50 issues, which make up the whole series, but unbound? In 1935 these cost 7d per week.