A morning of errands in the Transit. First to our friendly joiner at Willersey, then on to Broadway, then to Toddington, then to Broadway again, then back to Winchcombe. 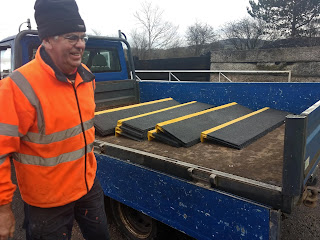 At the end of it we had these tread covers for the footbridge.

They are new, and anti-slip. 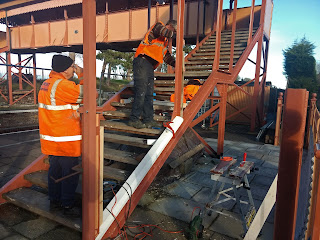 Then it was on with the carpentry and associated bits.

Normally Neal is still on the other side, but while some of the bits he was working with are being painted, he made a start on the Cotswolds side. 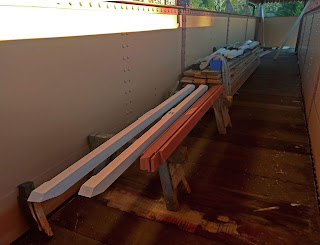 Painting of bits of timber continued up on the centre span, and outside the containers. There's lots of it, back and forth for fitting, more preservation fluid applied, back for fitting and another cut with the saw etc. 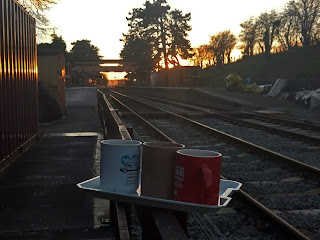 The mornings are still black as ever, but the evenings are perceptibly lighter suddenly. Mid afternoon, which was dark just a couple of weeks ago, still had enough light for carrying on, so three mugs of warming tea were made for the gang to keep them going. 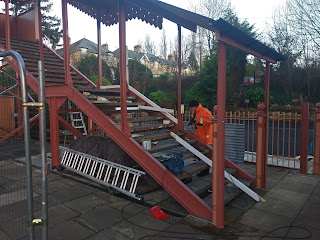 The tea was drunk quickly and gratefully, then straight back to work.

Here you can see that Neal is doing the bottoms along the other side, while John is drilling holes for them along the stringer. 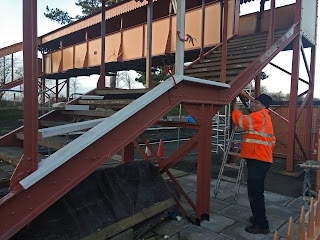 The last picture of the day shows Neal stepping back to admire the day's handiwork. We'd like this all to be finished by the second quarter, but it's hard to put a firm date on it. But we are on the job 3 times a week, so progress is steady.

Off to the new work site outside Greet tunnel! 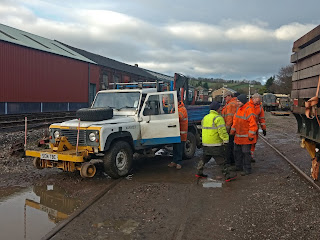 Dodging the remaining puddles from the amazing downpour Thursday evening, we loaded up two Landies with 'sleeper digging out' tools et cetera.

To the right is the pile of new softwood sleepers that will replace them. But they are here, and we want them there. How is that going to work then? 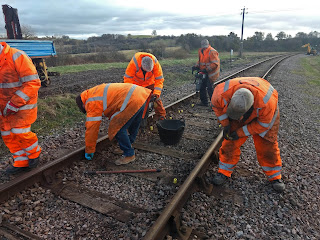 We set off in convoi to Working Lane at Greet, where we have a new useful access point, a long and very rough track that slowly rises up alongside the high embankment until it reaches the track, near the back of the Royal Oak pub (which we can recommend, by the way, it has a view of our passing trains).

Once on site we split into two teams. Team one was on ferrule replacing duty. 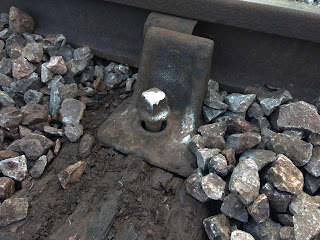 Along this section there are 70 sleepers that need replacing during this low season, and numerous chair screws are either proud, or have missing/ rotted away ferrules, still made of wood from days gone by. Today we use plastic ones.

This chair screw here is a typical example. It's not doing its job of tightly securing the rail to the sleeper. 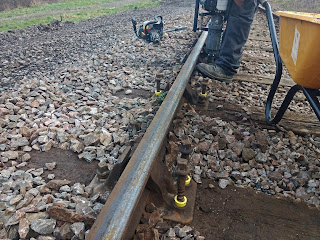 Chair screws were removed, old ferrules dug out (with some difficulty, the tool provided was not that useful), then replaced with new, and finally the impact wrench followed to tighten everything up again. 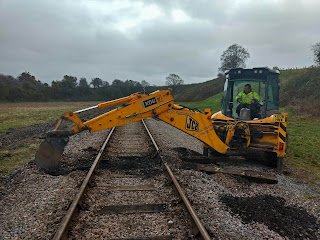 Team 1 1/2 was Stevie in the JCB, who worked on his own digging and then dragging out the sleepers marked with a cross a few weeks ago.

The JCB saves us so much work, it's a thankless task digging out sleepers. 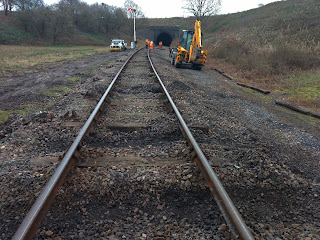 Team 2 was on actual sleeper replacement. Initially, and without the vital supply of new sleepers still at Winchcombe, they prepared the empty beds left by Stevie. In the picture above you can see a whole row of them. Team 2 was working from the tunnel mouth onwards. 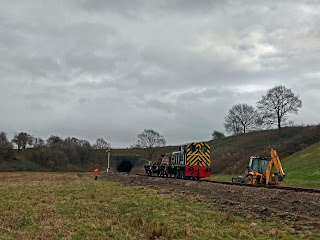 Eventually there was a toot and we were delighted to see that the C&W yard shunter was bearing gifts: lots of new sleepers on a bogie flat!

Finally we can get to the real job in hand.

The sleeper delivery stopped by Stevie, who you can see exchanging a few kind words with the engine crew. 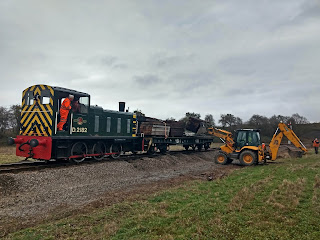 Shortly after that Stevie manoeuvered himself into position and started lifting off the stacks of new sleepers.

Bob the second man watched, no doubt glad for the opportunity for something different from shunting carriages around the yard. 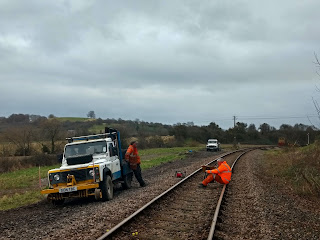 After a while the constant scraping of ballast, and lifting the weighty impact wrench got to the ferrule team, and we see them here having a secret little rest (team 2 being out of sight around the bend).

As it was a bit cumbersome to return back to the mess coach for lunch, it was agreed beforehand that we would bring a picnic and eat al fresco on site. 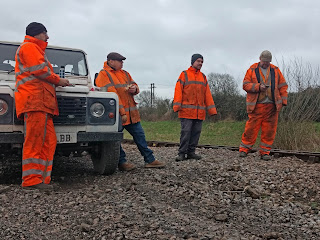 It certainly was fresco, there was a fresh breeze, and a black cloud over Breedon Hill slowly came closer and closer and dumped a lot of drizzle on us.

We had nowhere to sit, so lunch for most was taken standing up. Then it was back to work. 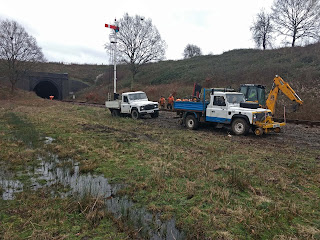 We took both Landies down a very bumpy track indeed to the tunnel mouth.

Some weighty items like cast iron chairs and baskets of track fastenings are not ideal for carrying a long way along the track. Here team 2 was busy dragging in the new sleepers one by one. Sadly you cannot just drag out the old sleeper, and drag back in the new. The bed has to be lowered with hand digging, otherwise the chair will not fit back on top and under the rail. 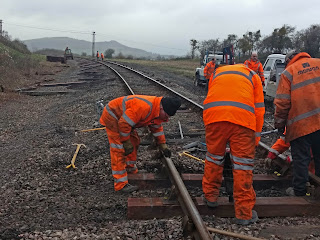 Teams 1 and 2 now combined and wriggled the chairs back under the rails on top of the new sleepers, then replaced the old ferrules and bolted down the new screws.

In the background Stevie has laid out a whole row of replacement sleepers, each one in its correct spot. 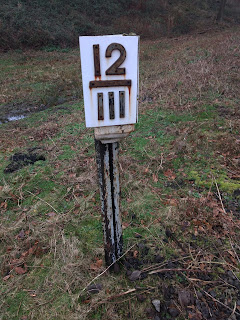 It was nice to see by the way that many of our quarter mile posts are now authentic, with a proper wooden top, cast letters and the whole thing attached to a GWR bridge rail. Hope you guys out there notice them. 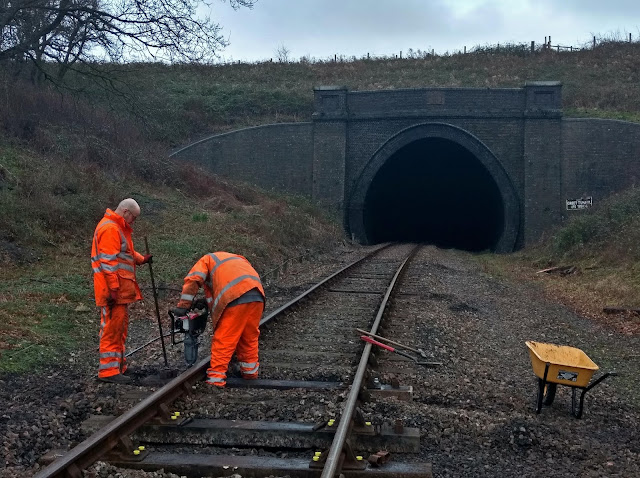 Last but not least, we completed the resleepering in the tunnel mouth area with the impact wrench, and in the foreground you can see the glistening sleepers just dragged in and fitted with chairs.

We think we did about a dozen sleepers out of the 70 to do today. That is a very good start, in particular if you consider that team 1 did not help with the actual sleeper work until after lunch.

Back next week. Fingers crossed that it doesn't snow!
Posted by Jo at 20:29