Walking is good for you.

We were filled up with Christmas spirit and food, so it was time for some exercise, and good companionship. Exercise does you good.

We met at Winchcombe, and split into two gangs. One went to load new wooden sleepers on to the bogie flat we cleared last week, while the other team took the two Landies to the southern tunnel mouth to change a cracked fishplate.

On the way north from our access point at Skew Bridge we passed the first train south - post Christmas trains are now running to 31.12, and they look quite well used too. It's an opportunity for steam heat and hot chocolate. 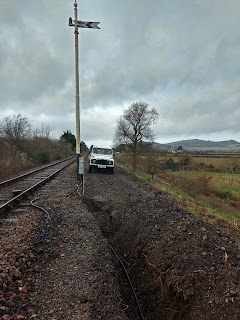 The plan was to head back north all along the trackbed from Gotherington to the tunnel.

We had some heavy kit in the back, so transport was most desirable.

We got quite a long way, almost there but for 1/4 mile when rapid progress per Landie was halted in its tracks by 'someone' (you know who you are, Stevie) digging in a signalling cable at the Royal Oak.

Steve had stopped digging this trench when services resumed, but will continue later next week. 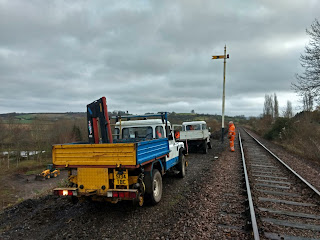 The second Landie also stopped of course, and we had to struggle on while carrying the heavy impact wrench, the replacement fishplate and other weighty gear.

Luckily we happened across a wheelbarrow half way, so that was borrowed and used to carry the two heaviest items. 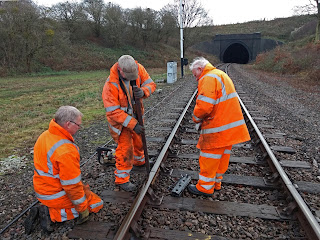 The repair was soon done. If all goes well and the tools are on site, changing a pair of fishplates can take just a few minutes. Not so quick of course if the fishplate is stuck on due to very cold or very hot weather, or a bolt is seized. 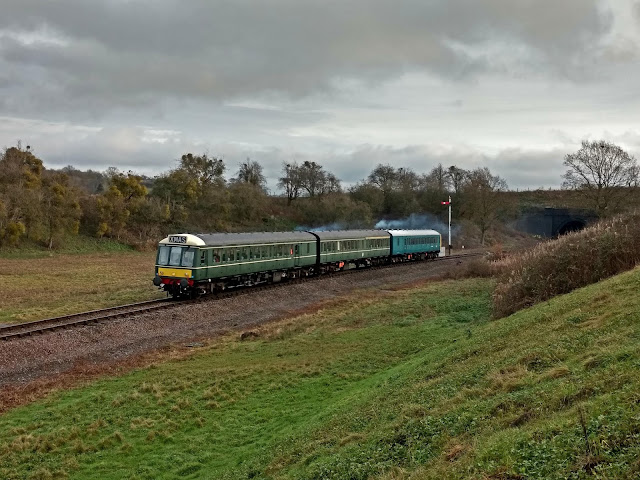 We had two steamers out today, and this DMU, which we let pass before resuming our trudge back to the two Landies (and Tony pushing a heavy barrow uphill over ballast).

As the last few hundred yards back to our transport were interrupted by the trench, we waited for the train crossing the DMU at Gotherington, before walking on through the 4ft to the signal. 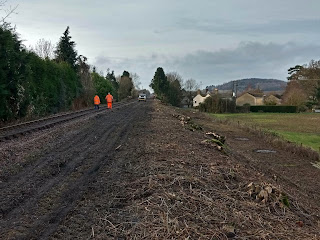 We then reversed the Landies about a mile along the top of the embankment, pretty high at this point.

That's the hamlet of Gretton up ahead. It's halt was by the tall tree on the right of the track.

There's been a lot of welcome clearance along here, but only along the side of the track where no new housing has been built. 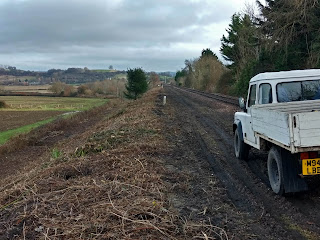 The view from the same spot, but looking back. 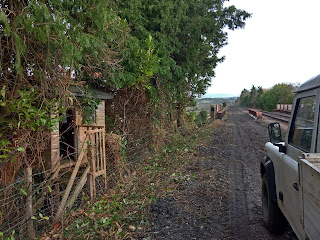 As the railway's property line is along the bottom of the embankment, we were surprised to see this Wendy house and fence along the top. 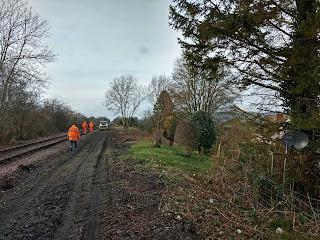 On the right is the site of the former Gretton halt, marked by a wider area of embankment. Part of it has been seeded with grass and shrubs planted.

On an earlier visit last year we saw two children playing here, and on being challenged they vanished back down the slope into a garden. 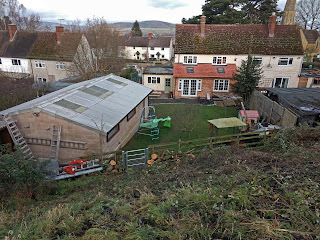 This property has its own access gate to the embankment, recently rebuilt in steel. 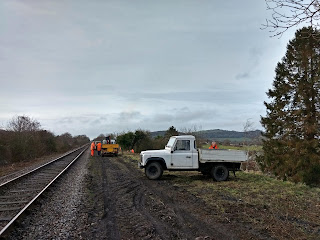 The site of the former Gretton halt gave us the opportunities to turn the Landies around.

Gretton halt must have been quite useful once, as there is a fair bit of housing around it, as well as a church and a pub, since closed. 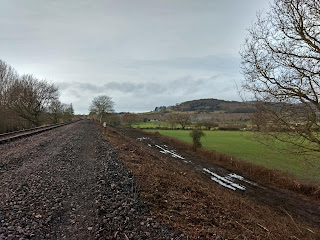 South of Gretton the embankment slope has recently been cleared by a flail. The machine was still there, working beyond the tree in the distance. The clearance gang was out as well, a great sign of professionalism and enthusiasm.

Not forgetting the drainage gang, out in the same area, and our very own Dave F, who is the track walker for the Winchcombe - Gotherington stretch, and who was out today. 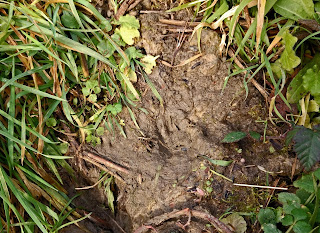 Even the animals were out. Can you see the paw print left by a badger (centre), with some sharp claws at the top, and a soft pad underneath? It was on a badger route that crosses the line. 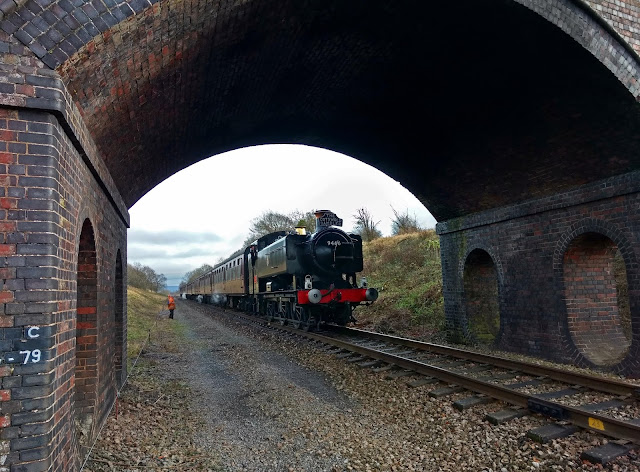 On the way back we stopped for 9466 as it passed under 3 arches bridge. It was the second steamer out, together with Dinmore and the DMU. 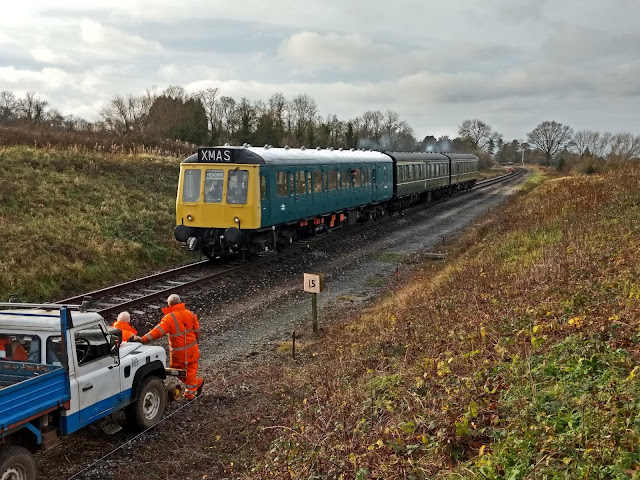 Before resuming our return journey, we waited for the DMU that we could hear crossing 9466 at Gotherington loop. Note the XMAS letters in the route code box.

That was it for the day, just a quick fishplate change, and a further inspection on foot of the rail in the Dixton cutting, where we had a break last week.

Next is our contribution to the Stanway viaduct repair work, which should keep us busy for a few days starting Saturday 4th. After that we will be spot resleepering south of the tunnel, where we marked up the likely suspects  a short while ago, and for which the new, replacement sleepers were loaded on to the bogie flat.