Careful with that shovel, it's a delicate instrument.

Quite an exciting day really, as we went to Winchcombe to pick up the blue truck to take the timbers for the footbridge sides for shaping to a local joiner in Willersey. 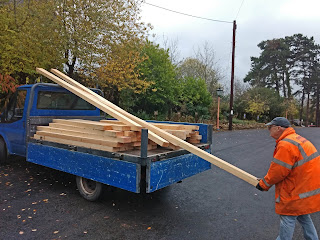 The first stop though was Broadway itself, to unload a small number of long 4.8m timbers, which Neal can handle himself. These will be turned into those distinctive crosses on the sides that support the panelling. 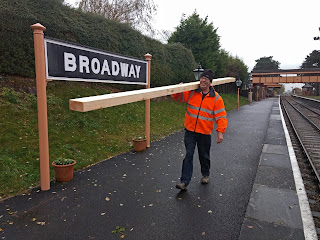 The timbers are quite heavy so two of us took them for that long walk down P1, over to the other side and into one of the containers.

On the way back to fetch the second, we met Neal with one entirely on his own.

Must be younger than us....

Then on to Willersey, just a short mile further on. It's a lovely little village, with a duck pond and two pubs. Willersey halt was a short walk away, and it must be the nearest village to the whole Honeybourne line. What price DMU shuttles to Willersey? 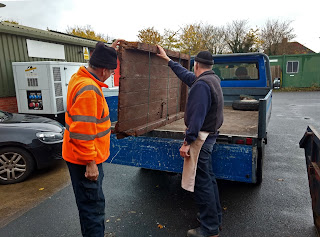 On the Willersey industrial estate, just a stone's throw from the site of Willersey Halt, we met our friendly joiner, Steve Warren (no relation to our well known JCB driver though). We unloaded all the timber, to reveal an old door. In fact, it's the original door from the Usk weighbridge building, which is in reasonably good shape except the bottom few inches where the rot had set in. Steve will tidy up the bottom of the door, and repair the bottom end of the frame for us. 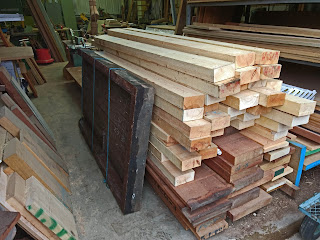 Here is the Broadway timber and the Usk door, all piled up inside the workshop.

The timber will be moulded quite rapidly, Steve thought, and we can pick it up again in a week or so. This is excellent news, as on the footbridge we are running out of work, unless the timber for the sides turns up. Then we can start brushing on the preservative and painting it. 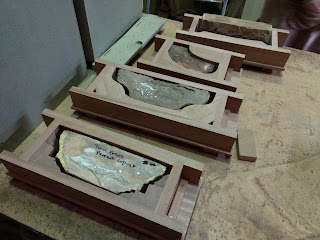 Steve is a man of many talents, we discovered. Just look at these newly made moulds for brick specials. The bottom one says 'Twin ended profile copers' - we have never seen one of these in action before. The new moulds are made 10% bigger than the original bricks inside, to allow for shrinkage.

The bricks are going to be made by a local brickworks a few miles away, and are destined for a Victorian latticework brick wall. It's a very delicate structure, most of which is constructed out of the quarter circles in the second mould from the top. We were amazed.

On the way back to Broadway, our journey took us past here: 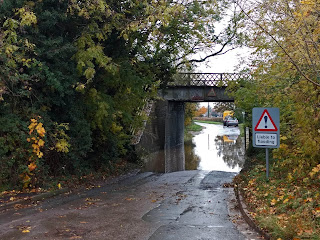 This is the Honeybourne line bridge over Badsey lane. Broadway is 1mile to the left. The former halt was right next to the bridge.

Note the flood - just like at Little Buckland - and a car on the other side is about to be recovered by an AA truck. There's an enormous lake and a clear ruler up the side of the bridge indicating the depth in the middle - here 1ft, too deep for cars. From the 'tidemark' on the ruler, it was 18ins deep earlier.


Back at Broadway John completed painting the last bit of the centre span ceiling. That job is now done, and not too soon, it is cold and damp and draughty up there.

As something to keep the bridge dry the roof of the footbridge is a complete failure. The treads on the centre span were absolutely soaked this morning, and the water will be sitting underneath the treads, and affecting both the steelwork below and the wood above. We really ought to put the windows back in, those that the bridge had at HIA.

A dry day at last, and no trains to get in our way. Well, at least not on the Broadway extension, specials were running today south from Toddington. After a round of doughnuts 9 of us set off for Broadway, where shovels and brooms were dealt out. The regulator had been past here, doing good work with excess ballast, but now the sleeper ends and clips were covered, which is not handy for the track walkers.

As we set off, we had a quick look at the switch, which is now repaired and back in service.


Here are two 'before' and 'after' pictures. All is working well again. 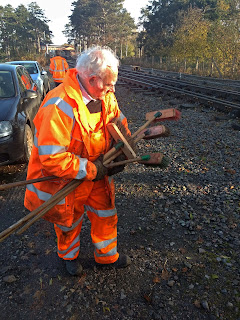 We took a shovel each and set off for an area of excess ballast.

Mike got the short straw (or was it a long one?) and ended up with a large supply of brooms.

We don't think productivity actually increases, just because you have more brooms than anyone else... 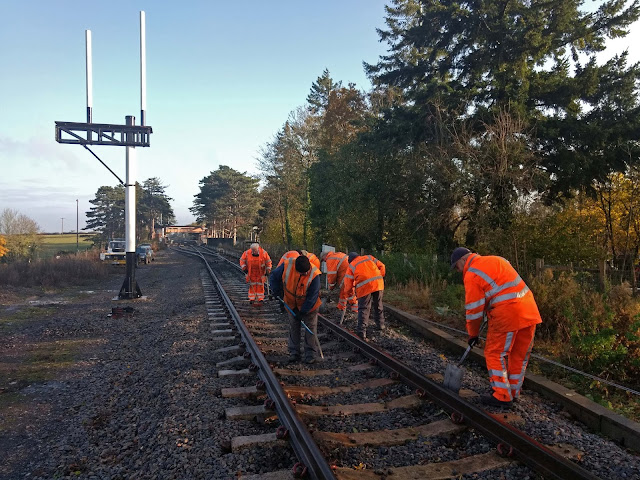 Here we are, kicking off by the new bracket signal. There wasn't so much to do here, it was an area where we could warm up for the main task further along. 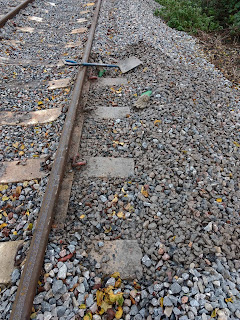 The above two pictures show the extent of the job, with on the left the excess ballast swept from the four foot into the cess by the regulator, but burying the clips and sleeper ends in the process.

On the right the ballast has been shovelled off the sleeper ends, and the clips freed from their cover of stones. 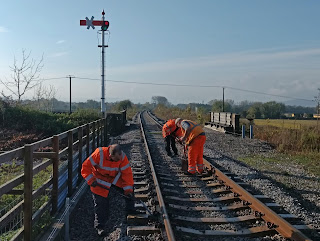 We soon reached the signal post signifying the end of station limits, and here there were areas of surplus and areas of shortfall, so there was some walking around with shovels to try and equalise the two. 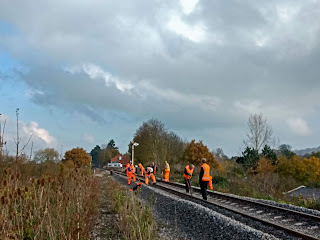 Beyond the station limits signal the excess ballast was a lot more copious, and the team slowed down.

After the many months of measuring, most of us were somewhat out of condition. This is healthy exercise, after all.


For lunch, we returned to Winchcombe to attack our sandwiches. If you are lucky, there is a doughnut left over from the morning session.

After lunch, work seemed a lot harder, with all that food consumed. Bert Ferrule remained keen as mustard, but the rest of the gang seemed more cautious and took a great interest in his technique. 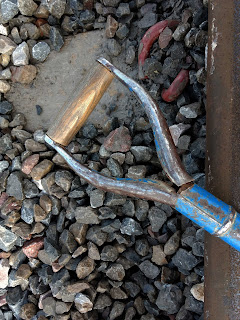 One keen gang member worked so hard that he broke his shovel.

You wouldn't think that was possible. It's a steel shovel, what can go wrong?

At the end of the day we reached mile post 5 1/4, or a quarter of a mile cleaned during the day.

We felt pretty good, and it was great to see that gang out again, doing what they know best. Good for cameraderie, and for that feeling of satisfaction when you drive home, tired but with a sense of achievement.