A real wash out today, and diesel gala weekend too. It was forecast to rain all day long, with extra low temperatures. Indeed it was only 6.5 degrees on arrival at Winchcombe this morning. That's quite a change from the 29 degrees on holiday in Italy just a few days ago - welcome back with a vengeance.

Only 4 volunteers registered on Doodle, but 8 turned up on the day. Quite encouraging, we don't get put off by a bit of rain. Well, only a little bit... 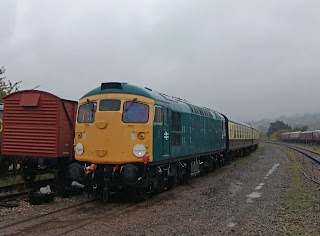 With the diesel gala on today and tomorrow, all 3 of our rakes were out in service.

The third rake was collected by D5343 from outside our mess coach, in which we sat huddled with mugs of tea. Looking out of the door hopefully to see if it had perhaps stopped didn't help. All we saw was the class 45 trundling into the station with the second rake. Not many people on that - the first train south out of Toddy. 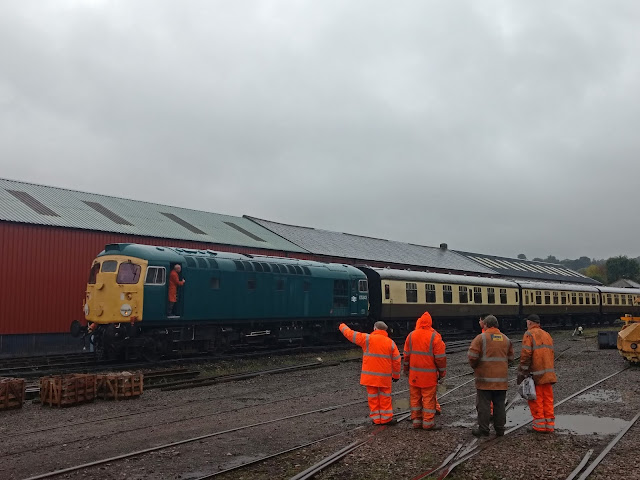 After much tea and debate, and not finding a nice warm indoor job for ourselves, we decided to prepare the ground for the repair of the yard throat turnout at Toddington. This received some damage 3 weeks ago during a minor derailment while shunting a tender.

D5343 pulled out of Winchcombe cautiously, and we gave it a little wave. We then helped Alan on the Telehandler clear the access to our spare timbers, so that we could select a few for the Toddington repair.

Then it was off to Toddington to inspect the turnout in question. 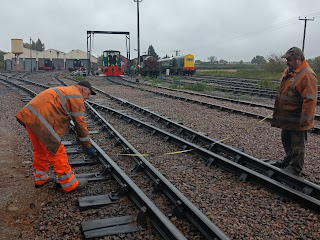 While the class 20 was revving up with the DMU in the background, Bert and Nigel measured the timbers that needed replacement, and noted down the numbers and types of the broken chairs involved.

We then dug out 4 timbers. This was a great idea, as we soon warmed up with the physical exercise.

Sufficiently warmed and with 4 sleepers duly dug out ready for removal next time, we spent the rest of the morning doing a trackwalk around the yard throat, and replacing clips that had fallen out, and any loose ones with Panlocks that stay in place. 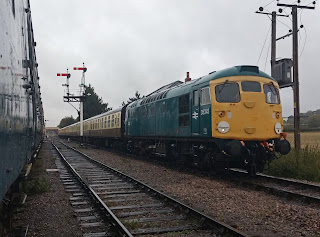 As this was diesel gala day, you will get more pictures of diesel hauled trains than usual. It was nice to see that at least some diesel enthusiasts were accompanied by their partners, even if they were ensconced in their comfy seats with a newspaper and a cup of tea! That's pragmatism for you. 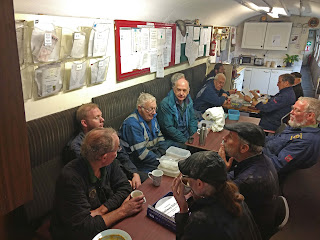 With all these diesels out and about, the steam lads didn't have much to do today. They too sat glumly over their cups of tea, while it rained outside. Well, that's got to be better than 15 miles tender first in the rain on 2807.... 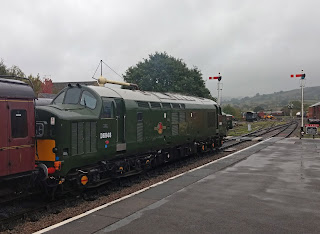 After exhausting the supply of clips we had brought, we repaired back to Winchcombe for more tea and lunch. Here the 'Green Goddess' was waiting patiently for its crossing train, while 37 215 brought up the rear. 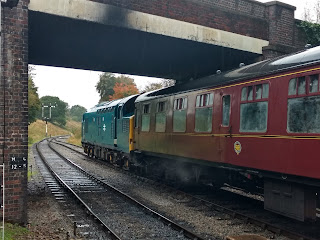 This train was also steam heated, as you can see. Not bad for a diesel hauled train in 2018. 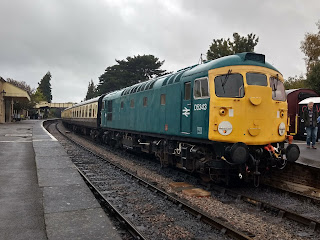 After lunch and most of us completely wet through, we decided to call it a day. Some took the option of a free diesel hauled train ride. Well, it doesn't come up that often. 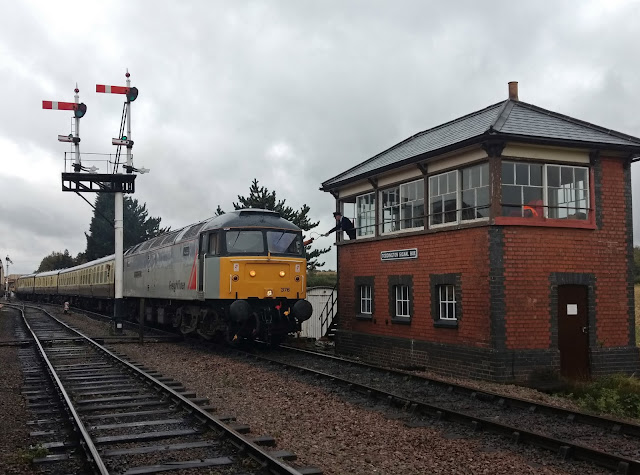 At Toddington the class 26 was taken off, and it spluttered back into the yard. In its place came our class 47, just to ring the changes.

Signalmen usually have their box nicely sorted out - heating, tea making facilities, and a comfy chair. Just once in a while they have to lean out and exchange token with a passing train, but they don't get wet for long. And yet we could do with more of them, if that tickles your fancy for a volunteering job?


Another job in the dry, although noisy, oily and dirty, is work on the Broadway.... 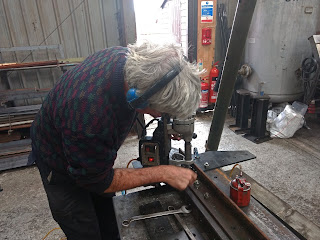 Neal has worked on these several times a week now, supported on and off by two more volunteers with heritage at heart.

All the steelwork has now been cut to size, and the current job is to drill the holes so that the parts can be bolted together temporarily. We asked Neal how many holes he still had to drill. He said 400 still to go. 400 holes still to drill ??? Well, he soon put that into perspective, as he pointed out that he had in fact already drilled 1600 of them. So in fact we are 4/5ths of the way there, which is really good.

In the picture above Neal is drilling the gusset plates for one of the 4 uprights for the intermediate landing supports. 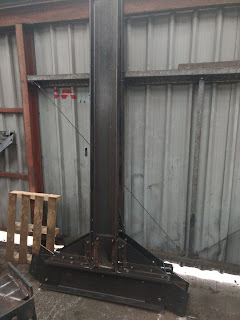 Here are two that he did earlier (not with a Fairy Liquid bottle and stickyback plastic though). The supports are stored upside down, should you ask. The foundations at Broadway are already in, so all we need to do is bolt them on. 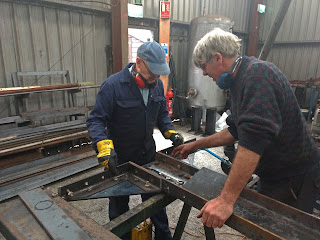 Having drilled the the big trapezoid gusset plate, the end is slid on to the stringer. 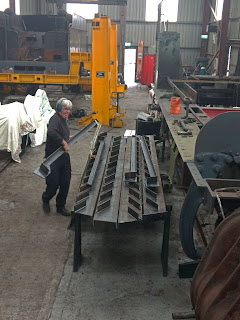 Work has also been done on the uprights for the roof supports of the steps, and the 8 main stringers with their cleats are now also done. You can see 4 of them stored here to one side. 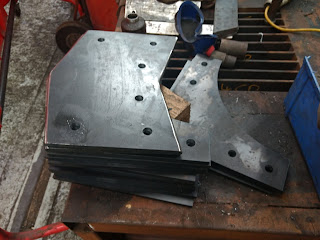 The big pallet of gusset plates you saw in an earlier blog post were great to receive, but none had any holes. They have now though. Part of the 2000 or so holes to drill, for the 600 rivets that will be used. 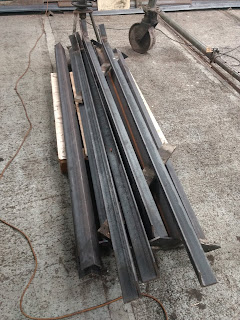 More roof supports. Each still has to be fitted with a gusset plate, and the stringer to which they are attached needs holes drilled for that too. 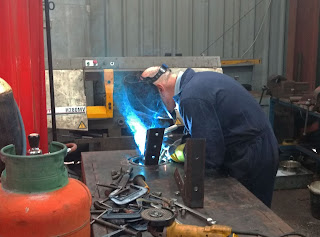 John welded some angles up together. The table he is using has a handy hole cut into it, hence the welding light is hidden from the camera, and we can take an atmospheric picture. 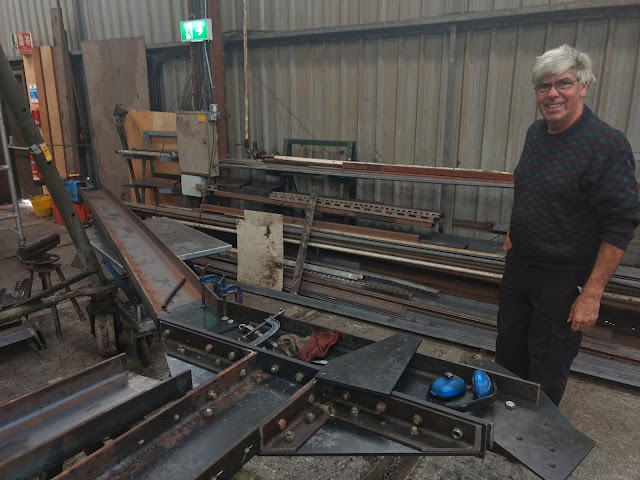 Near the end of the day - we are talking about Friday here - Neal started to fit together some of the fabricated parts into larger units.
Here he has fitted a stringer with the cleats on to the top of a landing support. This is to drill the end of the stringer so that it can receive the linking gusset plate. 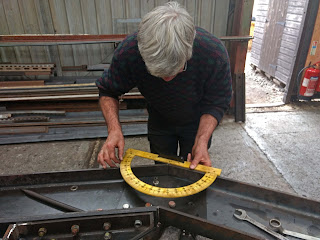 Having bolted the landing support to the staircase stringer, the question arose, was the angle correct? A bit late to ask now perhaps, but thanks to this big protractor we checked the angle and it was fine. Of course it was. 28.75 degrees exactly. 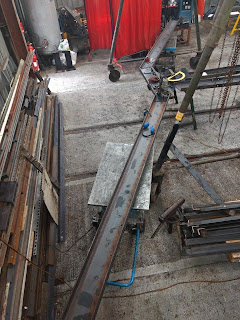 The stringer on the other end of the landing support also needed drilling for its gusset plate.

We could have taken the first stringer off again now, but just for fun we bolted both on together, so that you can see what one complete side will look like.

Long, isn't it? Of course this all comes apart, and fitting it on site will not be a big job. 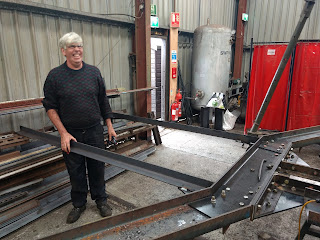 And while we were at it, why not fit two more pieces of the puzzle? These are two roof supports, now attached to the side of the intermediate landing. Neal is really enjoying himself now. 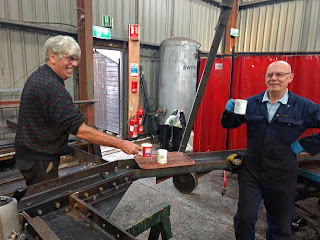 As we were beavering away so busily, one friendly loco dept volunteer offered to make us all a cup of tea. Now that went down well! 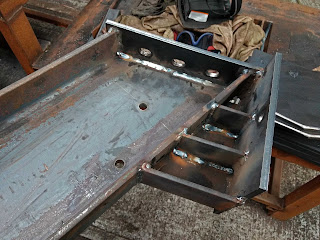 Our final picture of the day is to show you the arrangement at the bottom of the stringer. Originally the stringer was bolted on to a tall cast iron column that not only supported the stringer and footbridge steps roof, but also the canopy overhang from the station building. A very economical arrangement. Go and see how this was at Hall Green, where everything is still in place as built.

As the HIA footbridge reused at Broadway is about 2ft longer than the original, this arrangement cannot be replicated, sadly. The canopy overhang will therefore sit on its own 2 posts (made in the same square section style) while the end of the steps will now sit on the ground. Hence the new plate on the right. The 3 holes at the top are for a newel post in cast iron, with which the end of the steps will now be fitted. This is the most appropriate solution we could devise to give the new arrangement with the two posts at the bottom of the steps a similar look. 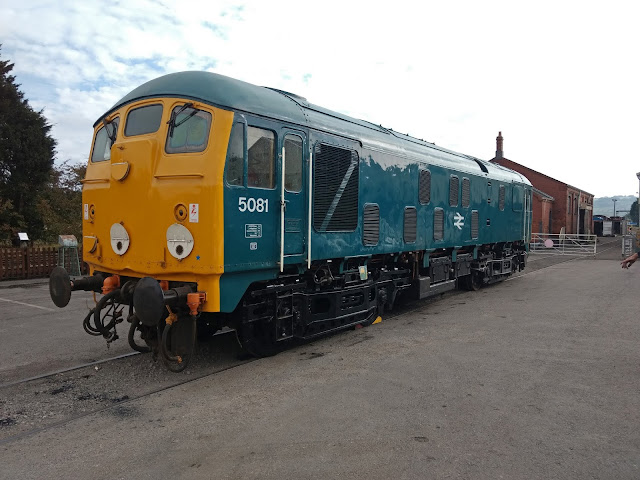 A final picture from Friday - D5081 has been taken out to be on show in the car park. It's in the middle of a bogie overhaul. The front one's been done; the back one is an accommodation bogie. But we wanted people to be able to see it. There are only 4 class 24s preserved - this one was the last one in normal service.