A good turnout of 13 today, perhaps stimulated by the promise of a visit to the steam and ale event after work?

Our mission today was to dig out the cribs of a whole row of sleepers from Manor Lane to the foot crossing on the outskirts of Bishops Cleeve.

This stretch has a whole series of dips, caused by oversized stone in the ballast used here when the track was laid back in the 1990s.

Steve, an old hand who was on the very same relaying team, recalled the oversized ballast, which was an economy measure in a period when the expanding and young plc didn't have a lot of funds. 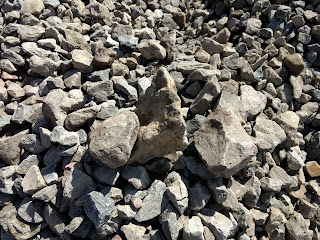 In this picture you can see some of the oversized lumps, mixed in with normal sized ones. Due to the big size they are almost impossible to shovel, and they cause early settlement of the track.

On the other side of the foot crossing normal ballast was used and - it has no dips in it. 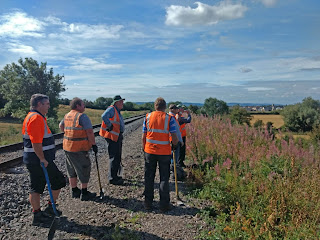 Following some rain recently the air was crystal clear, and you could see for miles.

Is that the Malverns over there? And that lump of trees on top of a hill over that way is May Hill, near Gloucester. 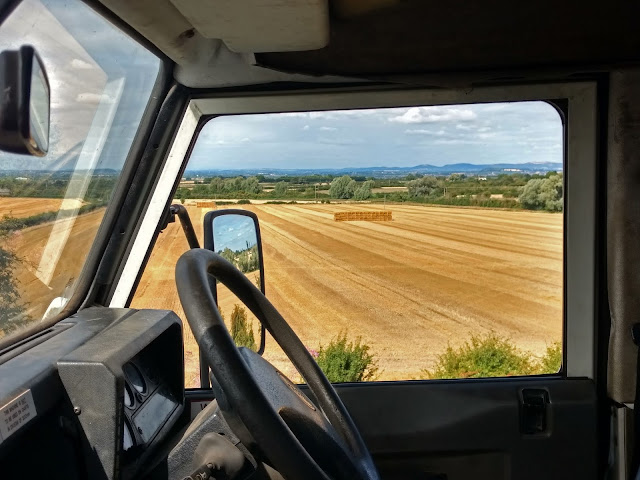 The farmers have been 'making hay' (or straw in this instance) and the harvest is in. The fields are a lovely golden colour, and those hills in the background are the Malverns, which form the other side of the Severn river valley.

This field is the last bastion of countryside, before the advancing housing estates from Bishops Cleeve reach Gotherington and form one big town. 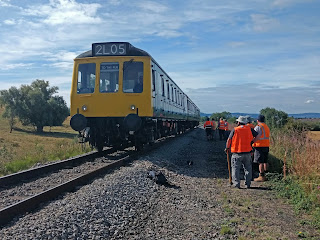 The DMU was out early, this being a special day with a beer and ale festival at both Winchcombe and Toddington. It shuttled between the two, but first went to CRC to fetch what Lord Blackadder would have called 'some early drinkers'.


We were a bit jealous, but we had some holes to dig. We did just the one thing today (except for a short trackwalk by Bert and Tim): Dig ballast out from between the sleepers, for lifting and stone blowing next week. 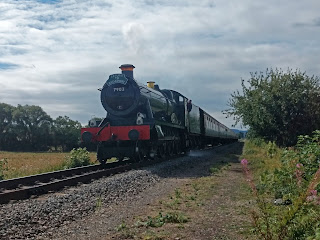 We had 2 kettles and two diesels out today, it was quite busy. First kettle was Foremarke Hall, here returning from CRC chimney first. 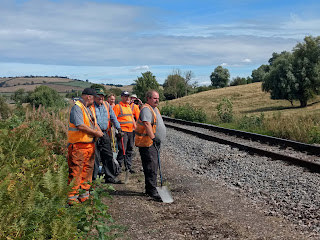 You can see for miles on this long straight bit of track. After all, our line was a late build and is particularly straight and level, being a former double track main line.

We wait for the next train, leaning on our shovels. 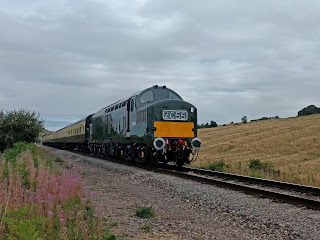 The 'Green Goddess' D 6948 was at the head of one of the diesel services, the other being the DMU. We heard it from far away (a good mile) as it opened up after Bishops Cleeve (speed restriction through the site of the former station) with a lovely bellow so typical of the class 37 series. 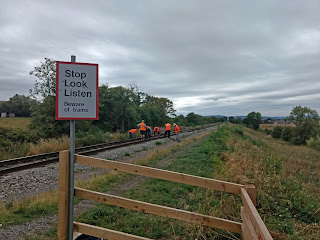 Our target for the day was two lengths after the foot crossing, and here we are already on the last joint.

Nigel had this pencilled in for a two day session, but thanks to our better numbers we did it in one. It's so much easier if you are a decent sized gang. We were able to split into two teams that leap frogged each other, and made fantastic progress. 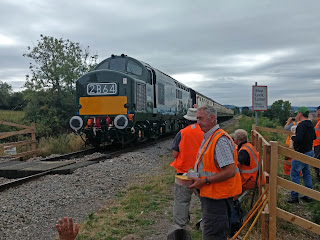 Lunch was held at the foot crossing, where there were some small ledges where we could sit.

The sky was darkening; rain was forecast for this afternoon. 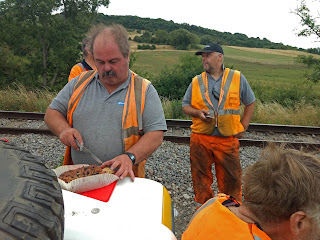 Mrs. B's cake was particularly succulent today. It was Apple and Blackberry, collected from the neighbour's garden the day before. How fresh is that?

Bert is first in line, but feigns nonchalance. His 50p is already down though, to bag the first slice. 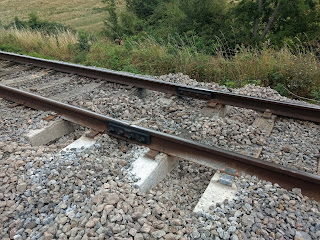 This is what we did today - dig a shallow hole under each fishplate, where the pan jack will go next week. Left and right of that the sleeper cribs were dug out to the bottom, so that when lifted, the sleepers will expose a gap of say an inch, into which the stone is blown.

It was hard and repetitive work today, but thanks to the good numbers not to heavy for each individual. 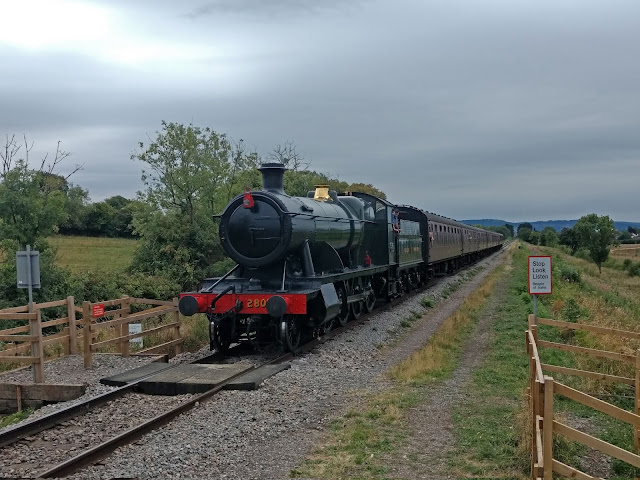 After the digging work was completed the Landie waited for the next train out of CRC, before proceeding to Bishops Cleeve where we could leave the track. On this train it was the second kettle, 2807 today. 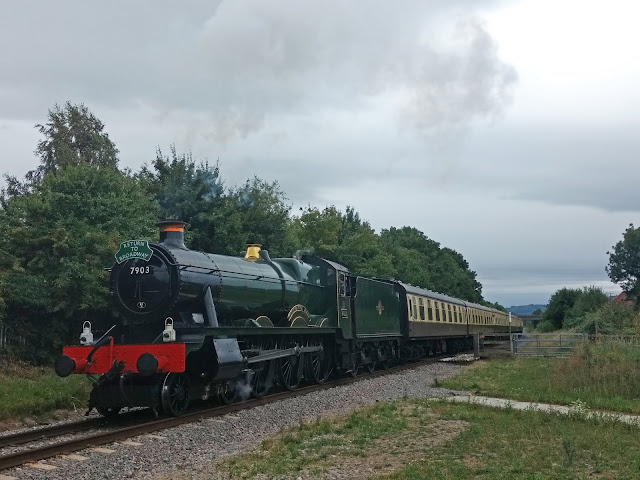 Last one for today, a picture of Foremarke Hall chugging through Bishops Cleeve, by the foot crossing which marks the site of the former station throat, the actual station being once located behind the camera.

Last Saturday, as the Landie on its PWay mission approached Gotherington, we noticed that the Prescott Hill climb was holding a two day vintage event. Car parking appeared easy, the fields were dry and the sun was out - this looked like a good opportunity for an exploratory visit the next day.

We were not disappointed, what an exciting day! 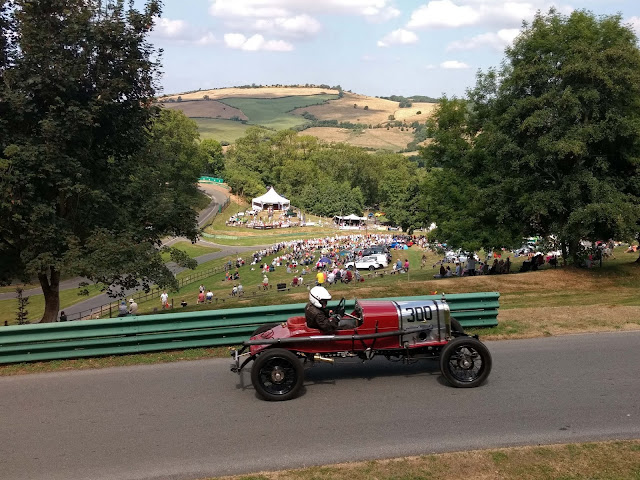 It's a real family event, with picnics and vintage cars everywhere. You can walk right up along the track, with this very pretty Cotswolds view at the top. The end of the straight from the start is at the bottom, followed by two hairpins. The car in the foreground is a 1923 Alvis, with an exterior gear change and a straight through exhaust, a lovely noise. 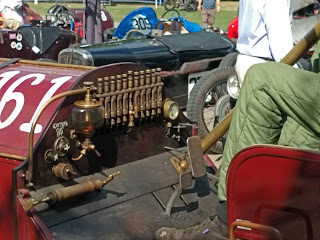 The engineering solutions in those early cars were fascinating. You sat on top of the car, rather than in it. And look at all those lubricators in a row! No glove boxes or heating controls here.

This one is a 1903 60HP Mercedes, with a - hold tight - a 9.2L engine! While the smaller 750cc engine cars such as the Austin 7s frequently changed gears, especially through the hairpins, the big boys just chugged along in the same gear, just running on the torque. 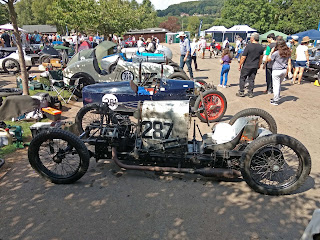 Some cars were very basic, such as this 1919 Gnat. Get yourself a chassis with 4 wheels, a V Twin engine, a cowling and a bucket seat. Go! 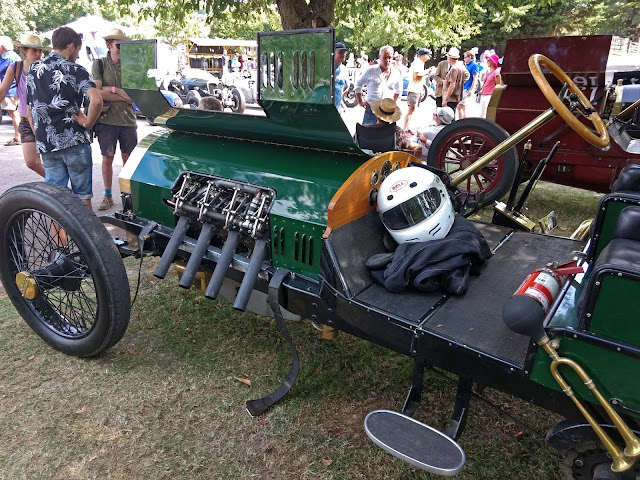 The most interesting one was this 1907 Berliet (the company made trucks until 1978). Again, a car to 'sit on' rather than to 'sit in', a lovely step board and a two tone horn. The most interesting thing was the engine here, a 1916 Curtiss 8.3L aero engine. It's a V8 with open pipes and open rockers. Watch them move on this video clip of it waiting for the start at Prescott:

The chain drive at the rear is also quite impressive. Better not wear a long scarf on this old car, as Isadora Duncan did. 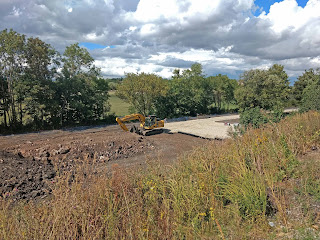 The car park being built by the council is making very good progress. Here you see the old surface being dug away, and new a stone surface being laid as a base. This is the Childswickham end, where the site widens and cars will be parked in a block; at the Broadway end cars will park in single herringbone pattern along the bank. In the middle an area with trees will remain unbuilt on. 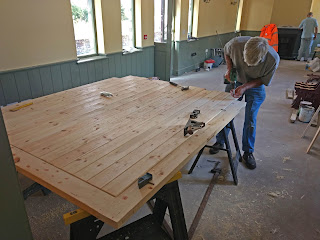 In the cafe the plasterwork around the completed fireplace was being repaired, and several passengers came in to see and admire it. It's very rewarding to get such praise, after all the trouble we took.

In the foreground Neal is making the woodwork for the traditional modesty screen that will go across the kitchen end (formerly the gents).


The first 6 cast iron seat ends for the next two 10ft benches have been finished in undercoat, and the wood for all 12 seat ends (4 seats altogether) has been ordered. The second lot of 6 ends is expected at the end of the month, as the foundry is currently on its annual holiday.

Broadway's 15.10 train to Cheltenham on Friday, the last one of the day, was taken by assault by a platform completely full of passengers. They all found a seat though, miraculously. Great stuff! 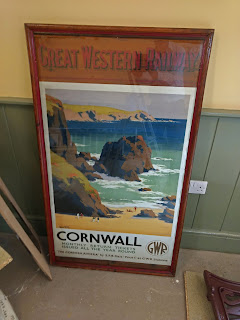 We are also looking into original style posters for the walls. These were attached to two types of frames, a rougher looking one with raised GWR letters on the platform side walls of the building, and some more upmarket ones for indoors with painted lettering and much varnish.
We will need to find someone to make us the platform side poster boards, and some weather resistant early GWR reproduction posters are on the way for them.

Indoors, a kind supporter has offered us this original lettered GWR poster board, with a reproduction poster on it, which we have gratefully accepted. The challenge is to make two more of these, on which more general notices can be posted, in authentic surroundings. Alex at C&W has already offered to replicate the GREAT WESTERN RAILWAY lettering, we can't wait to see it. 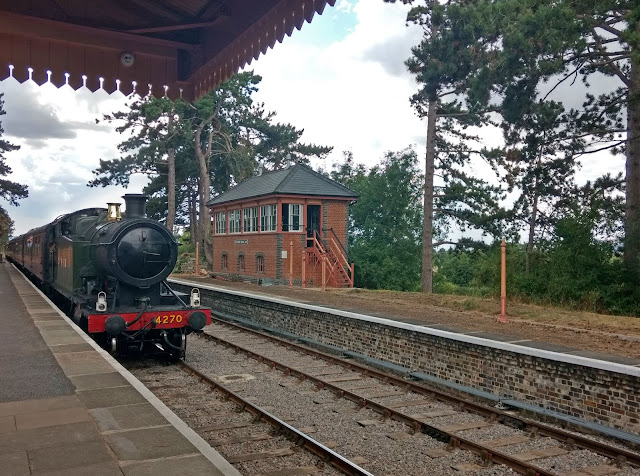 Good news too on platform 2, where a second day was spent on Monday removing more of the concrete troughing that was stored there. The troughing removal is now about 50% completed. It has revealed a clean view of the signal box at last, but also that the lamp posts have no tops yet.

Finally, a reminder to our readers that you can actually subscribe to an email service that tells you when the blog has received an update. Just enter your email address into the box at the top on the right.

The Heritage Herald has also been updated, with a report on Wednesday's second day at Usk: