Apologies for the longer than usual gap between updates, but the rail deliveries coincided with the blogger's holidays in faraway climes. All is back to normal now.

As you will have read, there was a delivery of rail on 2nd September, and this was immediately laid. It allowed the former temporary storage siding beyond the Laverton headshunt to be completely relaid with new rail, after the sleepers, removed temporarily to allow the stretch to be graded and ballasted on Terram, were put back. 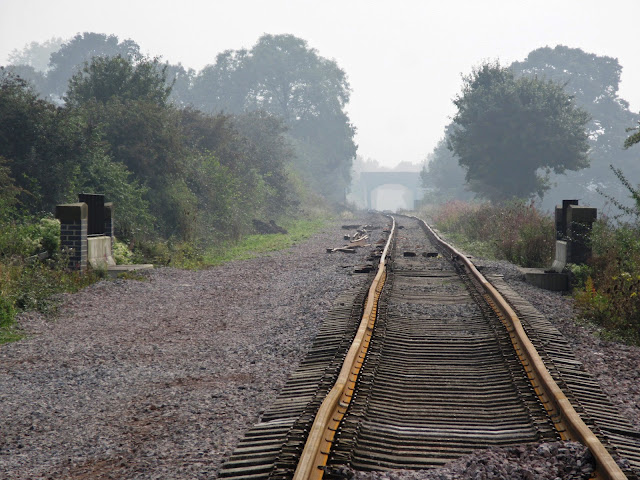 This is the site of the former loop at Laverton, with new rail taking over in the foreground, and continuing through the rest of the temporary storage siding behind the camera. It has all been welded up. 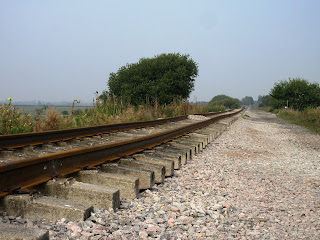 Looking the other way, towards Broadway, the new rail continues into the distance. The picture was taken from the site of the former northern turnout. Its component parts will be reused at the northern end of Broadway. A new weld figures in the foreground; the welders did a great job earlier this week and all the new rail laid, with the exception of three northernmost panels, is now welded up. 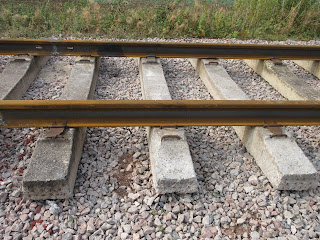 Just to be clear, the track laying job is not finished, but the rail and sleepers are down. They have been temporarily tied together with SHC clips every other sleeper to keep the rail in place. Work trains can now pass over it with caution.

The track still has to be ballasted and the CWR stretched into its final position, before it is fully clipped up. 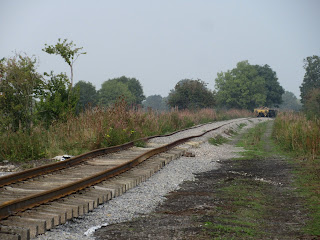 This is the end of the temporary storage siding north of Laverton, which has just been relaid.

Beyond, towards Broadway, is the stretch of rail that was already laid earlier in the year, and the two are now welded together and of the same new rail.

By the wagons in the distance the track starts to curve towards Little Buckland, a stretch that was already ballasted. 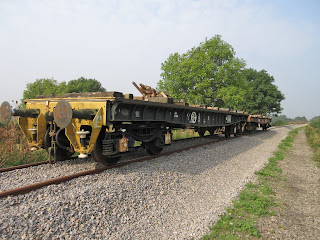 On this already ballasted stretch (a few 100yds) the two bogie flats used for carrying concrete sleepers to the worksite have been parked. In a couple of days these will be filled up with a fresh load of second hand concrete sleepers, from storage at Gotherington.

What is striking is how clean this stretch looks - all the excess material has been removed and rubbish left over from welding cleared up - a great job! 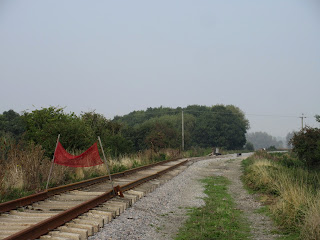 A bit further round the bend, and Little Buckland Bridge hoves into sight. The red flag marks the end of the welded track, completed earlier this week. Three and a half panels remain to be done; they will be addressed with the next welding session. 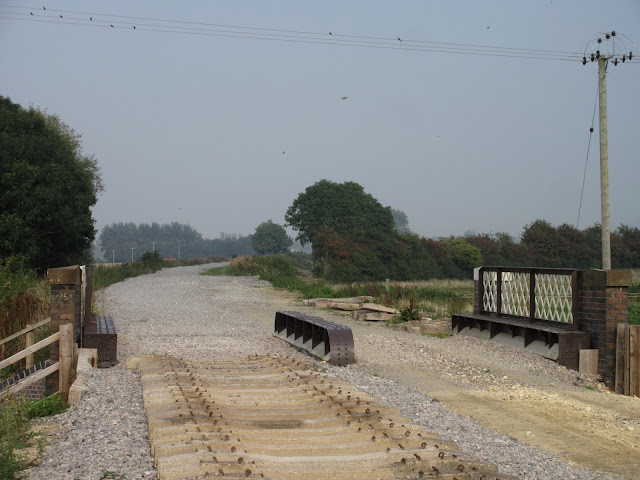 This is the bit you all want to know about - how far have they got? It's Little Buckland bridge, Bridge 5, the big bridge repair job. It's now fit for trains, and sleepers have been laid right up to it. A lot of work has gone into this area - new fencing, new drains, a huge bridge repair with new abutments and wing wall repair as well as the shotblasting and painting of the 100 year old steelwork, fresh ballast, and now, finally, the rail head arrives. A great day. 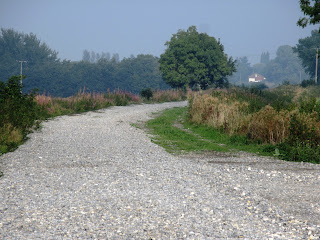 A look into the future: This picture was taken a few steps beyond Little Buckland bridge, just far enough along the newly ballasted trackbed to show the goods shed, on the outer limits of Broadway station. It's the red building in the distance; the white blob is a caravan. The new ballast stretches round to the next bridge, bridge 4 at Peasebrook Farm, approximately half way between here and Broadway. Once the bogie flats have been reloaded with sleepers, this is where track laying will continue. 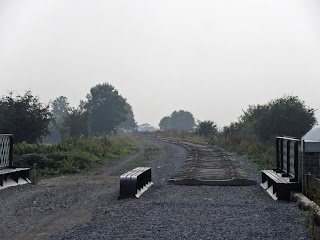 Just for interest, a look south from the same point, showing the end of the recently laid line of concrete sleepers. 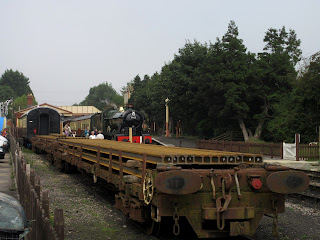 ... but we are ahead of the curve there, it's already been delivered ! Two bogie flats loaded with 56 rails (28 pairs) wait at Toddington for the next move. Foremarke Hall is about to set off with a well loaded train behind. 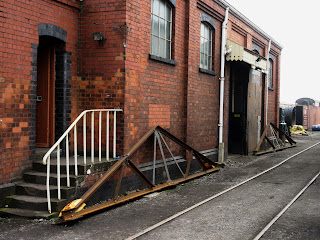 Three of the seven trusses have been completed, and await painting. This will be done by a small group from Broadway, where we have experienced painters.

The trusses have been assembled with bolts and these will be replaced by hot rivets in due course. A quality job, which has drawn a lot of admiration, now that you can see for yourself how good it looks. 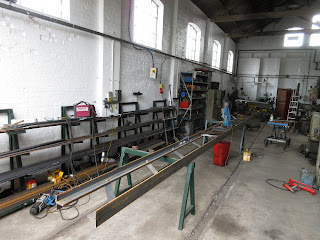 Inside the machine shop, work was progressing on the fourth of the purlins. It takes about two days to drill and assemble one of these. However, there are other big jobs to attend to as well, so it's not exactly 2 1/2 purlins a week. We are very lucky that someone has come forward from the loco department to do this for Broadway. 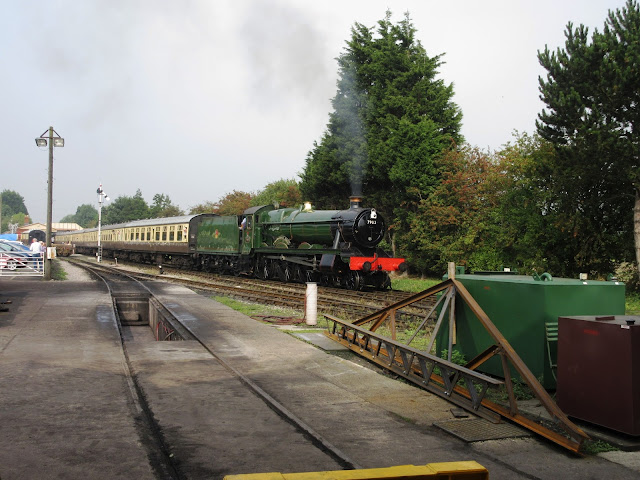 Outside, another truss and a completed purlin have been put aside for storage. It is hoped to test assemble a stretch of roof at Toddington in due course, before the actual canopy construction begins at Broadway, perhaps in the new year.

Foremarke Hall got the road and has set off for Winchcombe. It has the shiniest coat of paint, quite amazing quality there.
Posted by Jo at 17:12