Only modest progress since our last visit a week ago, due to the heavy rain, and the need to await the delivery of a big 750mm pipe to finish off culvert 3B, the one with the headwall well into the embankment. The pipe is now on site, but the contractor is now busy at Little Buckland on a French drain on the Cotswolds side (forgive the lack of a picture, but it's a long walk from Broadway, and the trackbed is not a good place to travel on with a saloon car) 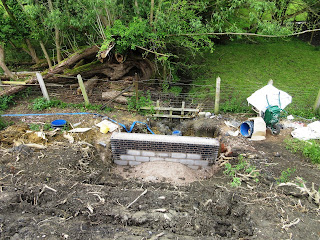 On Culvert 3A the news is better, as this is almost complete. You can now see the concrete infill between the two rows of blues, including the sheet of reinforcing. Another very large tree root was dug out too. 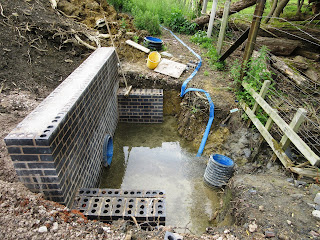 Underneath, there is no longer a need for the pump to do its work, and the water can now flow freely (and it had to, with all these cloudbursts we've been having). With the contractor at work a further mile away, we were unable to speak to them, but it looks like there's a bit of finishing off to do to cap the brickwork. 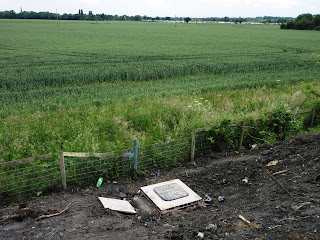 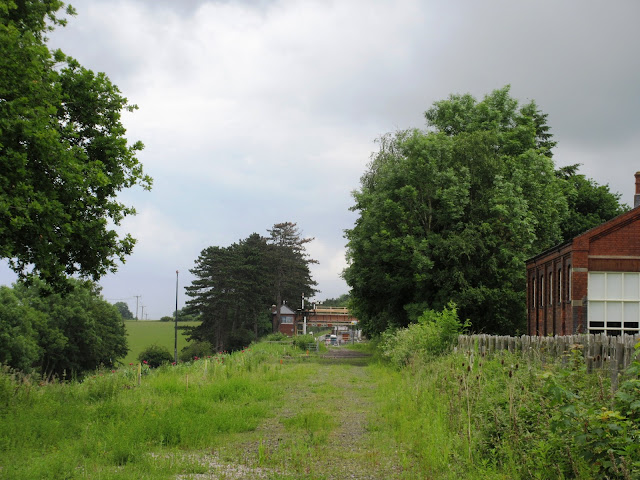 Walking back to Broadway, we get this view of the as yet unused trackbed. The grass is taking over again, after the intense investigations and earth moving along the side of this embankment.
In the longer term this site would be used by a second loop, but in the short term its installation has been shelved until we have more funds available. Only the run round loop at the station itself will be installed prior to opening.
The line leading into the station will run along the down line, on the right.
You can just make out the goods shed, now owned by the Caravan Club.
Originally, this site held 4 tracks - two main lines in the middle, and a siding down each side.

Brilliant news here in that fabrication of the replica canopy has really started. A large supply of angle has been bought, and some of the smaller elements are being assembled to test the process, see how it all works out. 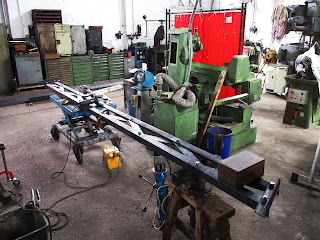 Pretty good, I'd say. Here is a first rafter under construction in the loco dept. workshop at Toddington. 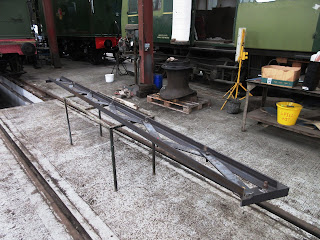 A second, the other way up, was on display in the loco shed. The whole thing is made of angle iron and strip, which is simple enough, but the art lies in getting the angles right.
Note the whole thing is held together by temporary bolts. These will be replaced by rivets in due course.

What's that bit for then, I hear you ask. The next two pictures will answer your question: 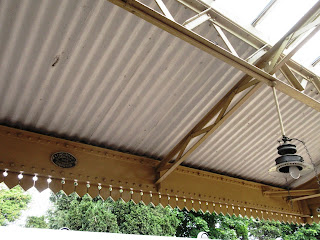 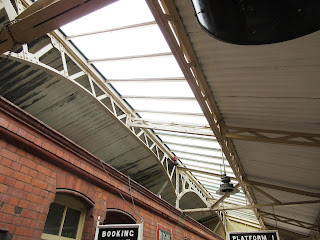 You can see how the angles at the end of the newly fabricated rafters are influenced by the slope of the roof.
These pictures of the real thing were taken at Toddington. You can also see them at Hall Green, where your blogger went last week to take a detail picture for the loco dept. We are very fortunate that we can just drive up and look at what we are replicating
The attention to detail to get the heritage just right is wonderful. This is what your share purchases are buying, so please consider a top up, as we are not half way yet.

Did you spot the E. Finch, Chepstow builders plate in the first picture? E. Finch supplied all the ironwork on the Honeybourne line, including the station canopies as well as the footbridges. The founder of the firm was a friend of I.K. Brunel.

Two Broadway volunteers are sponsoring this replica below: 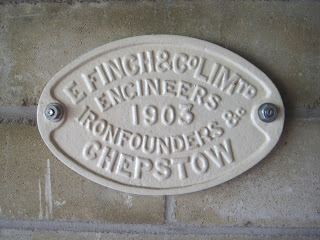 This is the original. It was very kindly lent to us by Brian Parsons, not only a former resident of Broadway, but also a former Worcester based steam fireman. He found it at Broadway during the demolition in 1963. Because of its near pristine condition, it almost certainly came from under the canopy, so is an excellent source for 4 replicas - 2 for the new canopy, and 2 for the footbridge. They will be delivered in a fortnight.