Once again, activity could be seen down the trackbed from Broadway today, and a quick tour of inspection after completing a job on the SB tunnel roof showed that a 360 equipped with a flail was busy on the Cotswold side embankment just north of Pry Lane bridge. 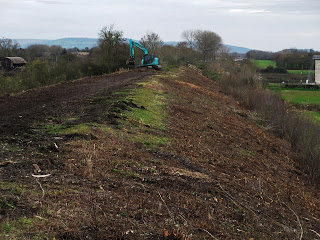 In fact the contractor, employed to make the shape of the embankment north of Little Buckland visible for inspection, had alread cleared quite a stretch of the Malvern side, and was working his way back south. On the right of the picture is the sewage works at the end of Pry Lane, Malvern side. 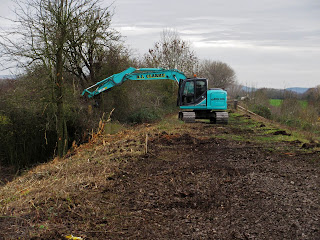 The machine is a regular 360 excavator, fitted with a special flail attachment. With the wing wall of Pry lane bridge just visible on the right, we see the machine here repeatedly dropping the flail on to the brushwood and reducing it to tiny bits.

Yours truly once helped to clear a modest 5m stretch of this embankment to reveal a culvert below, and can testify to the difficulty of standing on a 45 degree slope of rolling ballast, and dragging prickly bits of Hawthorn back to the top. This machine is a Godsend. 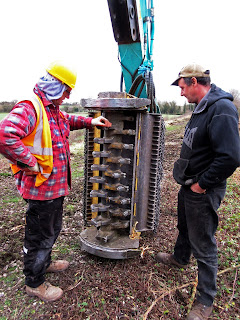 On seeing us approach with great caution, the driver of the machine paused to let us nearer, and stopped briefly to tell us a bit more about the job.

This flail attachment is a very modern piece of kit, with an up to the minute piece of design. The teeth are tipped in tungsten steel, but nonetheless a couple have already lost the battle with tough pieces of ancient Brunel bridge rail hidden in the undergrowth.

Telegraph pole guy rope holders left in the ground after the demolition train were initially also an enemy of the flail, but the learning curve has been steep and the operator now knows where to expect them every 50 yards, even if invisible in the bramble.

The teeth are of course replaceable, being bolted on. But not cheap. 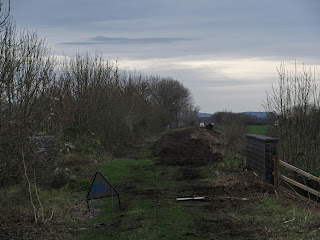 A peep across Pry lane bridge shows that most of the Malvern side has already been done, here revealing a wooden PWay hut that is asking to become someone's pet project for attention. 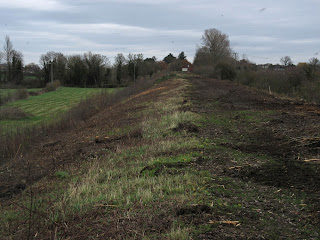 Looking back towards Broadway, the Malvern side is clear but for some more recent growth near the Childswickham Road bridge (this area has already been cleared once, but the self seeded trees quickly regrow). Broadway goods shed is in the middle. 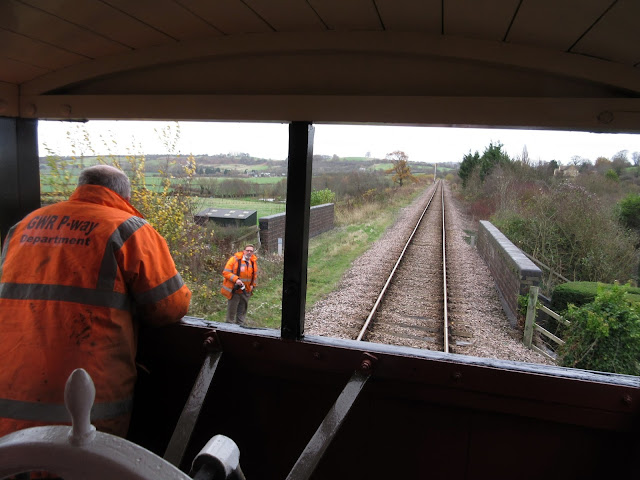 A final picture from the PWay gang yesterday - they were out with a ballast train and dropped +/- 100 tons of ballast at Gotherington in support of the maintenance tamping that has taken place in that area. The dropped ballast was then 'sharked' using this 'Shark' brake van to distribute it evenly along the line using a specially shaped plough slung under the van. The big wheel in the foreground (after many, many turns) drops the plough down to rail level, and, eventually, back up. A wonderful piece of Victoriana, and still useful today. We are a museum after all. The bridge in the picture is 'Working Lane' bridge, a charming name and one which refers to the nearby former the navvy village at the southern end of Greet tunnel.

On the extension side welding of rail lengths recently laid is due to take place next week, while at Skew Bridge at Gotherington a further pile of 400 sleepers is being extracted, sorted and stacked, ready for loading and transport to Little Buckland.
Posted by Jo at 17:25