A four unit team from Haigh Rail Ltd came today in 4 vans to weld up the first ten pairs of rails towards Broadway. Each team busied itself with a separate set of the 18 joints in question.

This exothermic welding process was rather spectacular, and you will excuse the larger number of pictures in this posting, which will describe how it was done. Your blogger, although well acquainted with Pway work, had never seen this, and no doubt many of our readers will find it interesting as well. 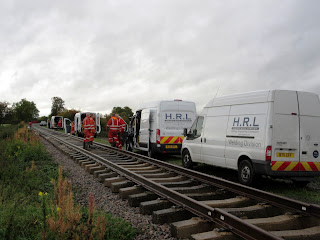 On a cold and blustery day, the 4 vans lined up along the rail head. Each van held the materials and gas bottles that support a crew to make a weld.

Pending the welding, the rails were not permanently fixed to the sleepers, being clipped only on every other sleeper, and without pads. Now that the welds have been effected, we can properly clip up this stretch. 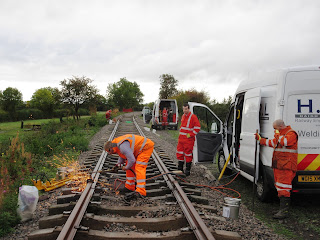 The first step is to create a gap between the rails to be joined that is exactly the right size. This gap is made with a special cutting torch that slices off the end of the rail of the desired thickness. 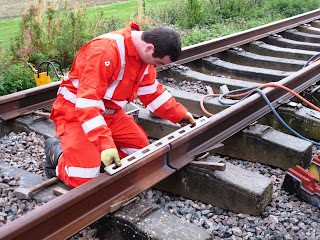 With the proper gap, the rails are then checked for a perfect alignment, and corrected where necessary with wedges, and sometimes, with brute force. 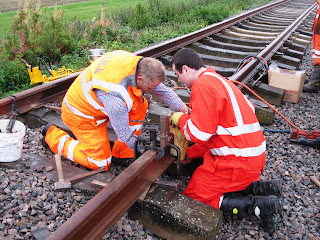 Using a special frame clamped to the rail, a pair of moulds is attached around the joint to be welded. 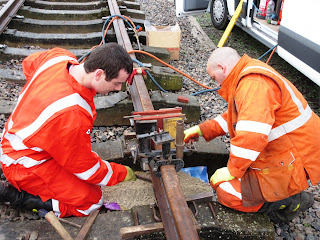 The joints around these moulds are then sealed using a special sand with a resin in it, which makes it sticky so that it can be tamped into place. 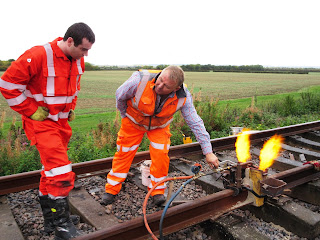 The joint is then heated using a special gas burner which blasts a flame into the mould, and which erupts back out on the top, with a rather spectacular effect of a V Twin flame that roars out. A bit like my motorbike then.

Mick explains how the heat can be adjusted to the right degree. 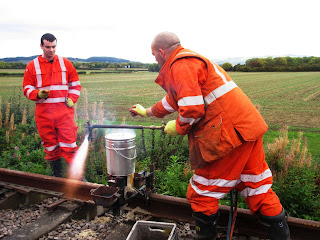 A single use crucible containing the Aluminium and iron oxide powder is then place on top of the mould, and ignited with a special taper.

To the left and right of the moulds are pots which catch the molten Aluminium which is released as part of the process. This is lighter than the iron which sinks to the bottom and into the joint, so the Aluminium floats to the top and can be collected at the sides. 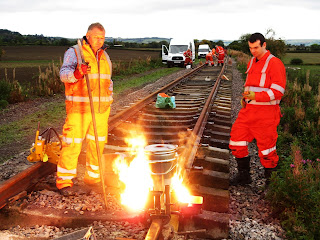 Shortly after the reaction starts, the plug at the bottom of the crucible melts, the iron flows into the joint below, and the aluminium into the sides, with a roar of flames and heat. 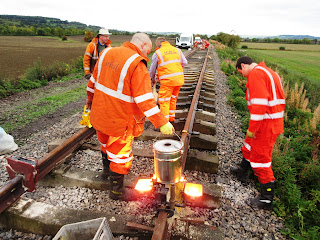 It doesn't take long for the reaction to conclude, after which you simply lift off the single use crucible, leaving two pots of molten Aluminium at the sides. 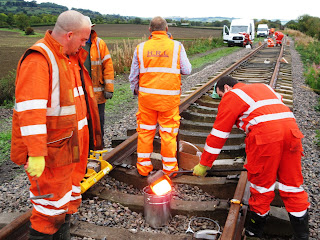 These pots are then upturned into the empty crucible for disposal. 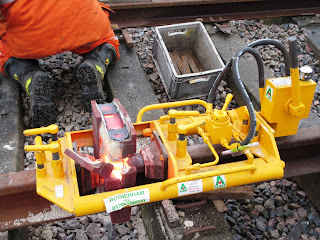 Once the apparatus has been removed, the remains of the moulds are left, as well as a stub, which is too big to be ground off. With the use of this hydraulic cutter, the stub is then cut off. 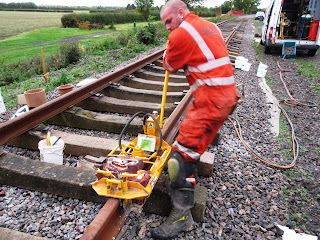 The cutter just needs a lot of pumping, to force its jaws together through the stub, which is still hot. 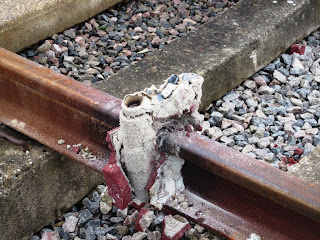 This is the stub that is left at the end of the thermite welding process. 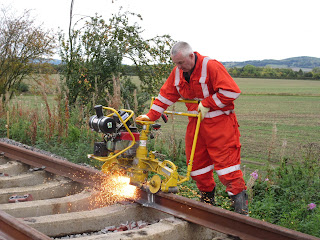 A portable motorised rail grinder is then used to grind off the remains of the stub, and to achieve a completely flat rail surface. 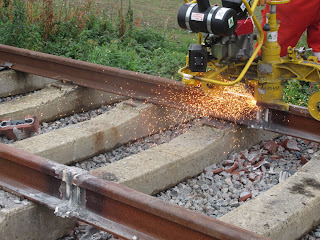 This picture shows the untreated stub in the foreground, and rail grinding in progress at the rear. 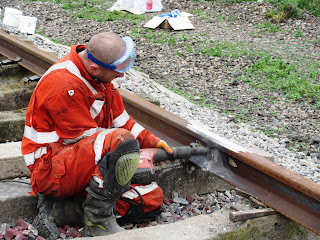 Finally the inside of the web is cleaned up using a Hilti with a needle gun attachment.

Surprisingly, there were different forms of crucible in use. Each supplier of the materials has his own, slightly different system. The next couple of images show you the types used by one of the other teams, just as curious as the first. 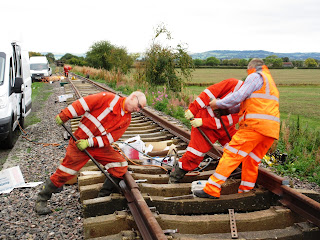 A few joints away, a second team is seen setting up their pair of rails, which were not where they should be. Although great care was taken to spread the ballast out evenly using a laser level on the JCB, it can still happen that there is a height difference between rails to be welded, such as is the case on the right. Rails with concrete sleepers are notoriously heavy, so you can see the effort that was needed to shift them, even if only a few millimeters. 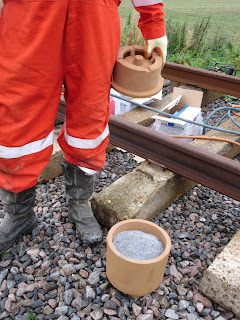 This team was using a French single use crucible, which had to be filled with the powder kept in special tubs. This is what it looks like, the silver colour being accounted for by the Aluminium.

The process generates heat up to 3000 degrees C, which is considerable. According to a recent television documentary, it is thought that the extreme heat of the molten Aluminium from the 9/11 planes burning accounted for the unexpected weakening of the metal framework inside the towers, not simply the crash. 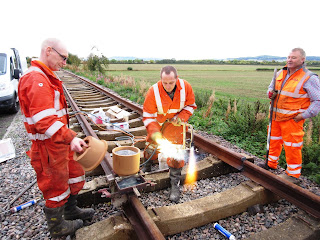 This French system has trays facing the other way, and we can see here how the powder is about to be lit from one of the pre-heating torches. A lid goes on top.

Mick supervises the process, and gives advice based on the many years he's been doing this. 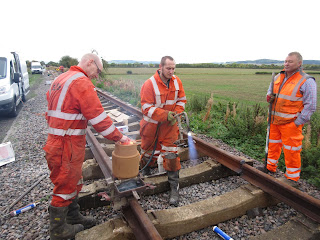 The lid goes on. In the foreground is a tube of sealant, which is used in this process instead of the resinous sand used in the first. 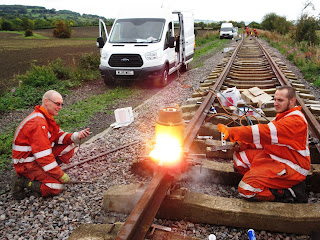 The burn takes place, and after a short while the aluminium starts to flow into the two receptacles on either side. You can imagine the heat, even from several feet away. 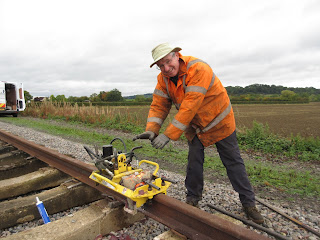 In fact, there is so much heat released that it lingers, and frozen GWSR volunteers can avail themselves of it and warm their hands.

A cup of coffee and a chat in Andy's car was also a rather reviving pleasure, out of the wind on top of this exposed embankment. 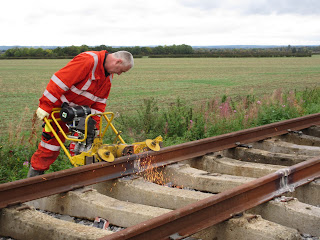 The rail grinder then came along here as well, and showed us how it can do sides as well as the top. A neatly designed machine. 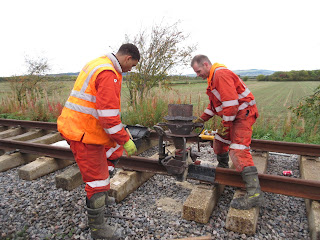 This steel crucible is mounted on a frame, which allows it to be swung into place once it is loaded, and the moulds have been attached. 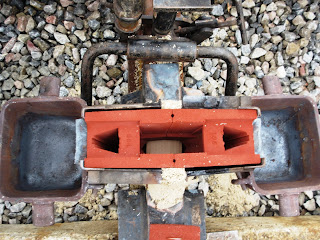 Here is a view into the top of the mould. The gas burner blows flames into the centre opening, and the flames, once round the joint, come out again through the two holes on the side, so making the 'Vee' effect.

The pots collect the molten Aluminium. 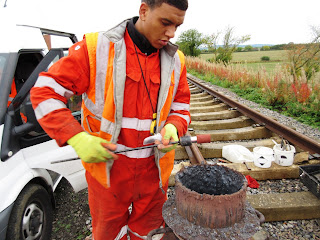 Here a special plug is inserted into the bottom of the multi use crucible. This melts at a predetermined temperature, and allows the molten iron at the bottom to flow into the joint. 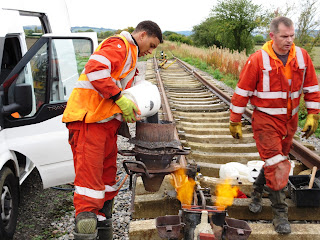 The Aluminium and iron oxide powder is then poured into the top, and the whole thing lit with the taper.

As this takes place, the gas burner is heating the up the joint (flames at the front), and when it is at the right temperature, gauged through the use of stop watches, the crucible is swung over the mould and ignited.

There isn't a picture of this one going off, but there are two videos.

The first, longer one, shows the burn using the single use metal container, as well as the removal of the stub with the hydraulic jaws:
https://youtu.be/vQikC5WD9L4

The second film, rather shorter, shows the multi use crucible ignited, which seemed a bit more spectacular still:
https://youtu.be/iNhkbLtOK30

Finally, a quick check at the Broadway goods shed showed that the 45T excavator had finished the job for which it was hired. Our engineer and our contractors now have a good understanding of the structure of the embankment there, and we await their options and recommendations. 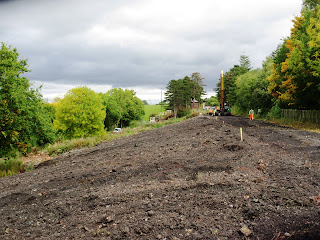 The 15 trenches were back filled today, and the slope of the embankment regraded to give a gentler slope, starting at the row of yellow tipped posts. Unfortunately, this will no longer give room for the siding that was there, but there will be the double track main line, on the right. The photograph was taken from the position of the former siding.
Posted by Jo at 22:00