The steps arrive at Broadway

We said you needed to be patient, but it wasn't for very long as, unexpectedly, the Warflat was taken to Broadway on Sunday. 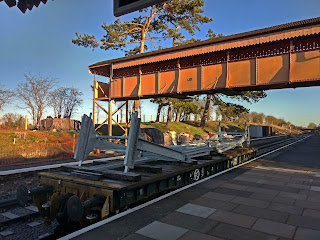 Many of you supporters will have noticed this via the webcam, and here it is, parked by the footbridge. 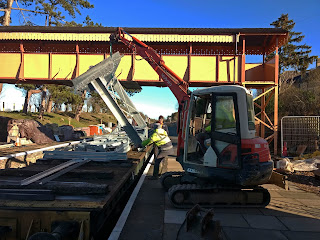 We only came to unload what we could by hand but, fortune favours the brave, the contractor working on the driveway had a mini digger of the right size and was agreeable to offering a half hour of his time to unload the heavier kit for us. 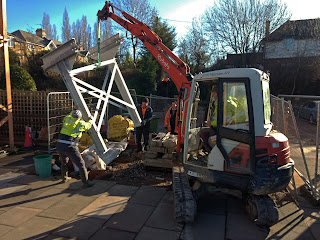 He said 'Do you want me to drop the landing support on the deck, or straight down the hole' and we thought - why not?

Yours truly was volunteered to remove two occupants from one of the holes first: a pair of toads. They were re-housed behind the platform. 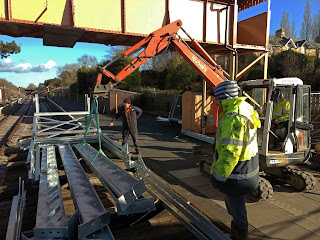 What is also quite heavy is the stringers, so we lifted those off too. 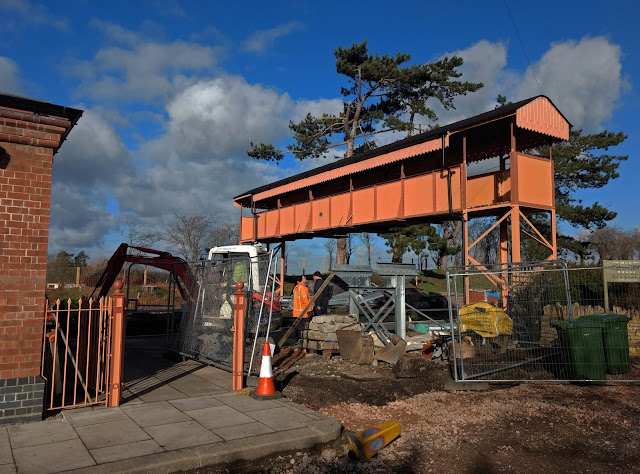 And here is the first of the two landing supports in its place. It all went very quickly and smoothly. Our neighbour even came out to congratulate us.

Note also the fresh ballast that now covers the forecourt. After digging away, the contractor is now at the rebuilding stage. 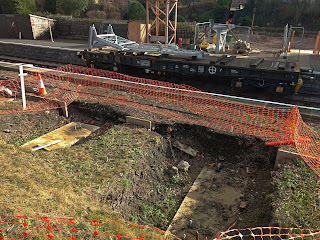 On the other side, this is where the second landing support will go (the hole on the left).

The first installed landing support can be glimpsed in the background, with the remaining kit for P2 still on the Warflat. 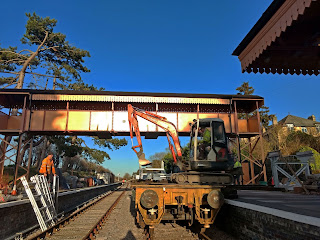 We had various discussions about how to lift in the landing support on P2, and eventually decided that the mini digger would drive all the way round via the platforms, but this morning we had a brainwave and loaded it on to the Warflat instead. 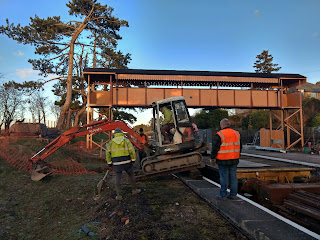 Later in the afternoon the Warflat was shunted to the second platform, and the mini digger was taken off again and parked up. Problem solved! Such an elegant solution. 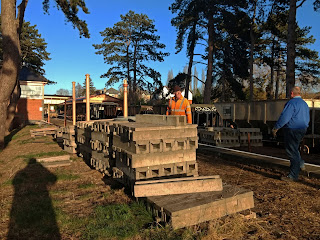 With some time to spare we thought we'd make ourselves useful and decided to help the S&T department - we are all good friends - load up more of the piles of concrete troughing that once lined P2.

Only 3 out of the original 40 piles now remain, and they will be loaded tomorrow, together with the remaining platform slabs that are also stacked in a somewhat inaccessible way on P2.

Strike while the iron is hot, or the mini digger on P2! 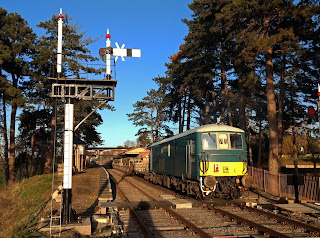 The class 73 with its chirping compressor then shunted the flat wagon with the troughs on to the Pway train stabled in P1, coupled up to the Warflat further back, and then shunted the whole train northwards, where it could use the turnout at the Honeybourne end to access P2.

With our jobs done for today, there were a few minutes of spare time to photograph the goings on in the setting sun. 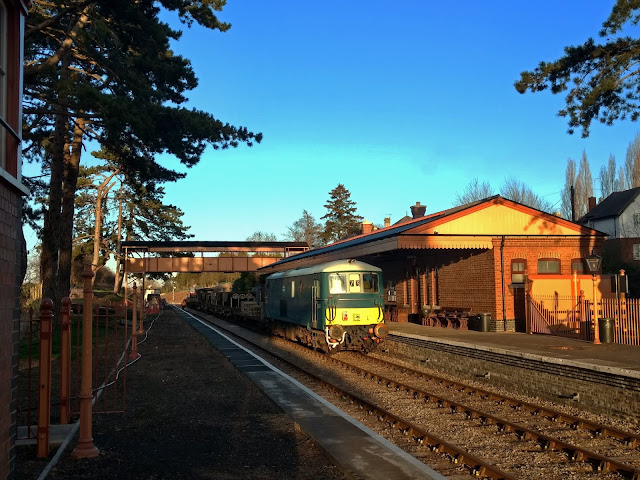 Here is the class 73 reversing with the entire train through P1, past our lovely new station building. 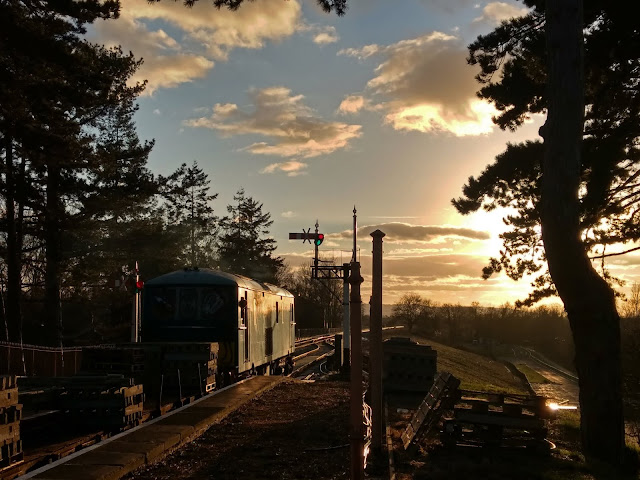 The class 73 then entered P2 and pulled the train through until the Warflat was level with the footbridge.

Just 3 piles of troughs still remain to be loaded, and P2 now looks so much better, ready for the new season. No more looking at a concrete wall.

Your blogger's dream one day is to see a steamer enter the station on a day like this, with the glint of the setting sun reflecting along its boiler. Not yet, but he is a patient man ! 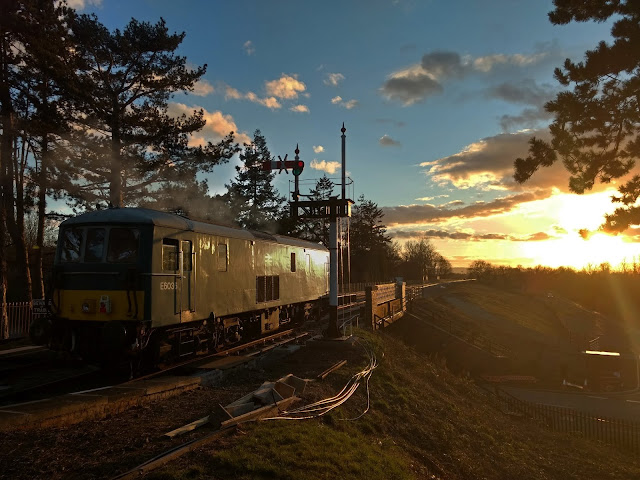 Here's a bit of glint for the Electro-Diesel lovers among us.

Finally the canopy construction team walked back through the station... 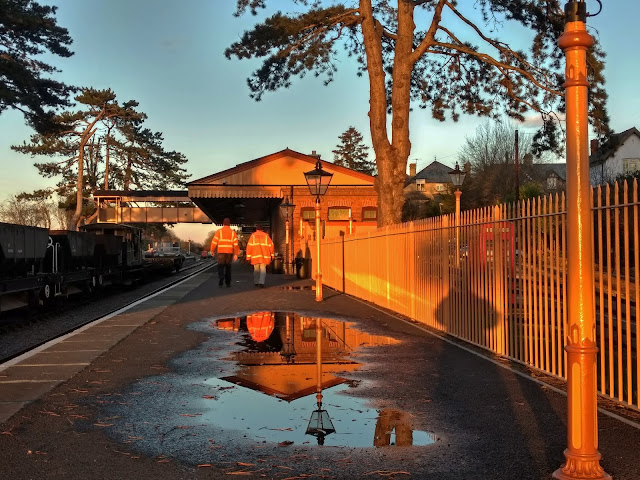 This is why we volunteer on the GWSR, it's the feeling of satisfaction at the end of the day that we have achieved something. And of course, Broadway is a beautiful station. 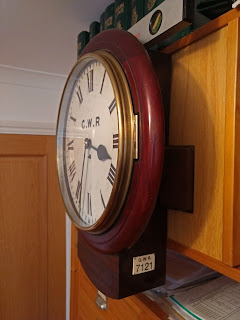 The replica GWR clock for the cafe has had an Ivorine number plate fitted, just like the real thing. It was donated by a supporter. The clock is now in the hands of the FoBS and is ready for fitting in the cafe above the fireplace. It was funded by 2 supporters.

There were 7119 numbers allocated, and this plate is the 7121st. This way, if you know your clocks, you can tell that it is a replica.