Getting up to speed now

Monday and Tuesday at Toddington

After the start of track laying on Saturday, Monday and Tuesday saw further work on removing the spent ballast underneath the old track, and resupply with new. 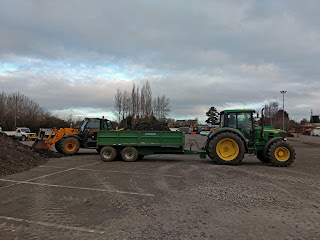 The spent ballast pile in the car park grew bigger and bigger, until relief came in the form of this little tractor and trailer, which started to remove it again.

The destination of this spent ballast is our track access at Gretton, where a long, boggy track rising up to the tunnel is an ideal place for spent ballast. 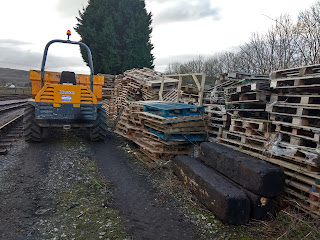 Manoeuvering past the huge pile of lighting up wood with a fat 6T dumper hundreds of times is tricky, but so far so good.

But those timbers in the foreground here for lighting up, that's a bit optimistic, isn't it? They're quite chunky...

At the sight of the big dumper the Toddington station group asked very nicely if we could ferry around the redundant playground furniture. Happy to oblige. 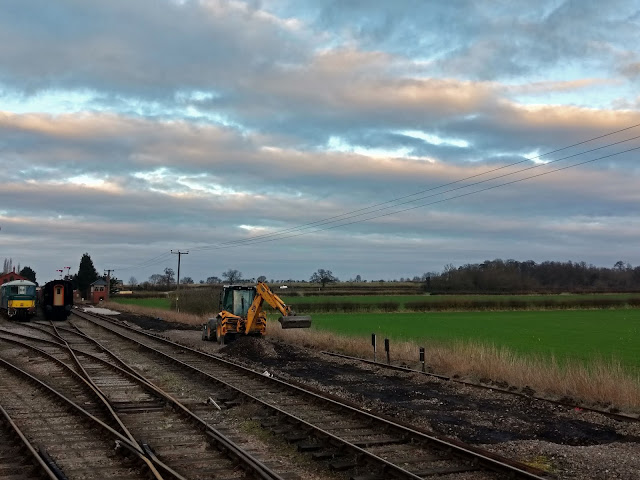 Meanwhile, Steve continued to scrape the spent ballast into piles in a number of short stretches. Behind him is a finished stretch, and behind that, another with fresh ballast in it. 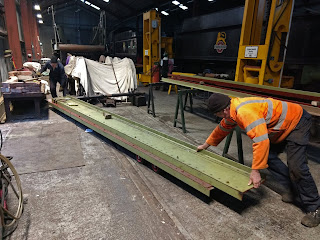 The footsteps / canopy team had a day of reorganising and minor jobs, such as re-cutting the threads on the tie rods.

Here they are parking the completed fascia boards down the side, until we can start riveting them.


On Tuesday a small gang carried on with ballast removal. 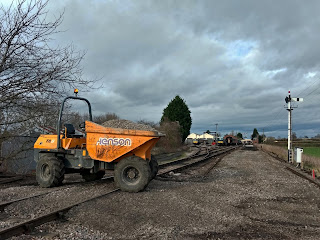 Mid afternoon came a nice change in the pattern, as the whole trip was reversed and the dumper drove empty up past the pallets, and returned filled with fresh ballast.

Although there are no trains, there are some trains.... see below for the answer to this contradiction. Look left, look right.... The fresh ballast arrives at the long stretch dug out on Tuesday. Each load gives a bit of bed about 3m long. 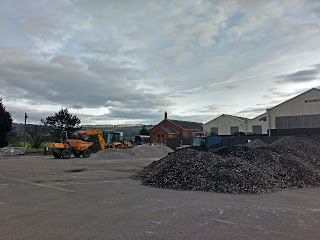 In the car park there are two piles of it. An old one, and a new one.

Luckily the old one has now stopped growing. More fresh ballast arrived in the morning, but was mostly used up by the end of the day. 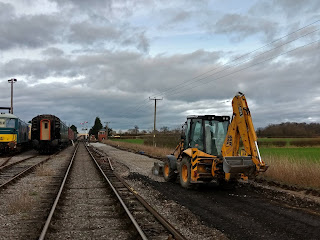 At the end of the day we stopped loading, and Stevie came over the level out the day's drops.

As you can see, it went quite far. The darker colour is Tuesday's work. 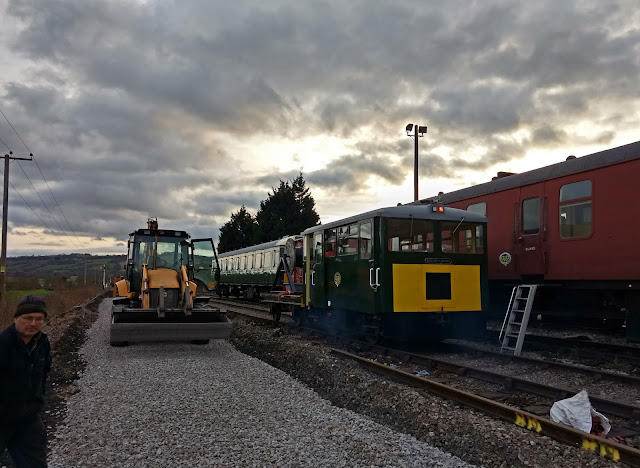 We stopped at sunset and here is a train that isn't in the timetable. It's the S&T department returning after a trip to Broadway. 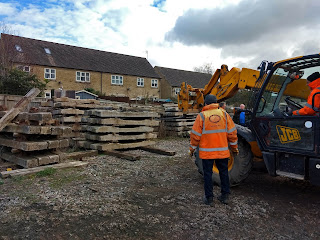 The main gang returned for another session on the relay.

Four volunteers split off to load concrete sleepers at Winchcombe. 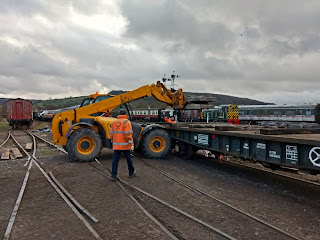 These are left overs - not suitable for laying under track, with various defects but the concrete is always good!

They are required at the Stanway viaduct, where the 4 corners will be piled and retaining walls installed. 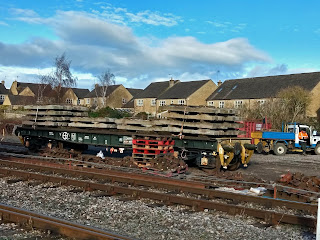 This also helps us get rid of stuff blocking up the yard.

After an hour or so 80 sleepers were piled up on this bogie flat, ready for locomotive haulage north. 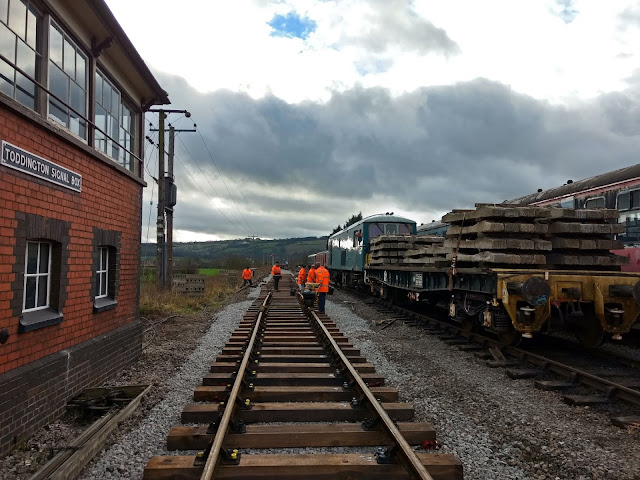 Then back to the gang at Toddington.

Within minutes the class 73 arrived with the same sleeper wagon. Here it is carefully pushing past the work site, using the loop road, which is still serviceable. 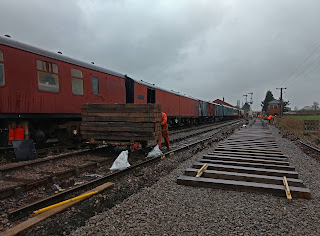 It was a grey day this morning, the forecast not so dry, it has to be said. Once the sleeper train out of the way we were able to trundle the Permaquip along the line with the next load of replacement sleepers. But the sky started to look ominous.

In the distance two more groups are fitting chairs under the rails laid on Saturday, and keying them up. That's quite slow and laborious. Clive went up and down with the TB2 and screwed them down. 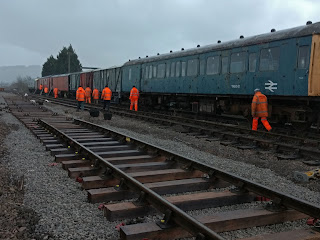 There was a clatter of tools and next thing you knew there was a line of men filing back to the mess coach. It was a packed show today too, virtually every seat taken. 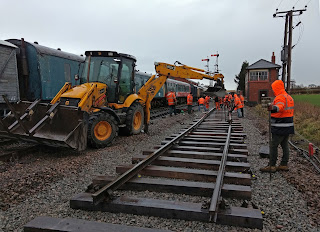 We spent some time looking out of the window, munching.

Eventually there was nothing for it but to climb back down that ladder and face it. We got wet for about an hour, then it got a bit friendlier. During that time the southern end of the gang laid in another pair of rails. 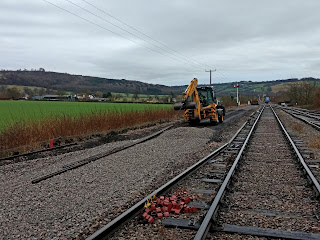 We would have lad in a second pair but uncertainty reigned, despite an excellent plan of the works provided by our HOD, about which rails were intended next.

We were sure about these - scrappers. They had a red 'X' marked on them and so Steve took them away. But what in their place? Saturday will no doubt sort that out. 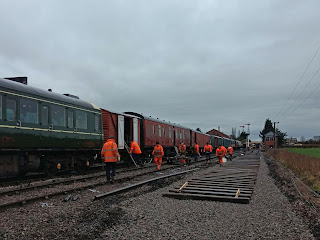 At the end of the day, with light starting to fail early due to the heavy cloud, we had laid out about 50% of the new sleepers, and 25% of the rail was back in.

About 25% still remains to be dug out. We are keeping this in the ground for the moment, as we would like to relay the headshunt as well (the one with all the diesel engines on well wagons on it) but it needs a shunter to take away the wagons. If we then remove the track we can dump the spent ballast right in from where it is being removed. The spent ballast is fine for this siding, which currently sits about a foot too low. 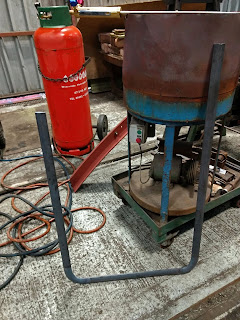 PWay work was finished for the day as it got dark, but in the loco shed the canopy team was still at it, in a nice bright work environment.

Today they made the handrail for the yard lamp. Didn't they bend it beautifully! 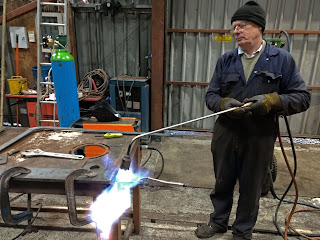 The next job was to curl the ends under (so that you don't take your eye out as you climb up) and here John can be seen heating one end up, ready for beating into a pig's tail shape.

Sadly the oxygen fizzled out, so this will be for another day.

Friday is announced as a riveting day, as the footstep parts are due to be loaded on to the flat wagon now in the yard the very next day.


Finally, a quick stop at Broadway on the way home to see how the scraping of the forecourt was going. This started earlier in the week, after preparatory drainage works. 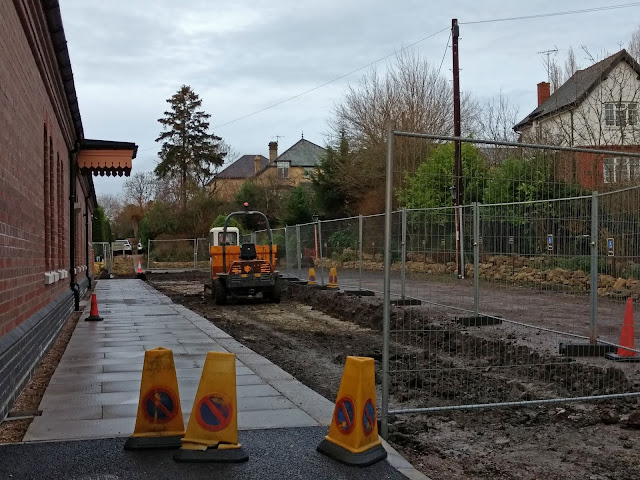 It is surprising how much spoil has come out, but we don't want the surface water to drain into the building, hence the kerbs along the front.
Note how the far end is a yellow colour. This is the original clay. The site is level, but the original ground profile, before the station was built, was a slope towards the road, with the railway coming out of a cutting and on to an embankment. The station sits exactly on where cutting changes to embankment.
Posted by Jo at 17:26