Launch of the winter works

Winter was here with a vengeance this morning. The temperature was minus 4, and this in the sunny south! We're not used to this. It climbed to a miserable 2 1/2 during the day, but luckily it was windstill and it didn't actually feel too cold. 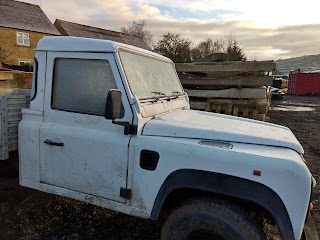 This Landie was though completely covered in ice, and was a bad boy - he wouldn't start. 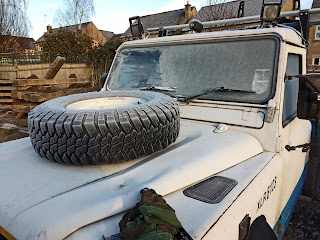 After some coaxing, this Landie did start, but a lot of work was needed to clear all 3 frosted up windows, and the two mirrors.

The inside was frosted up too, but luckily this one has excellent demister action, so the inside slowly melted. 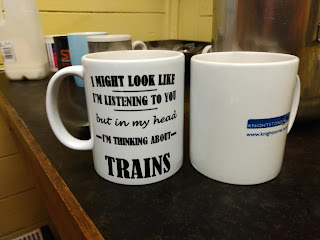 Meanwhile, the others were enjoying hot tea and hot doughnuts in the mess coach. There's such an atmosphere in there on a cold morning, with 15 men huddled round a steaming teapot, until Paul comes beaming in bearing a large tray of heated jam doughnuts.

One volunteer proudly showed off a Christmas present from his sister, the mug in the above picture. Well, that text certainly sounds familiar... 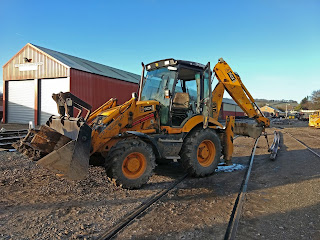 Stevie also dropped in for a mug of hot tea, before setting off for Toddington with two replacement BH rails in tow. He then went on to help one of our two groups today, whose job was to fine tune the northern end of the Toddington northern carriage siding. That's the end that stops by the viaduct. The curve needs smoothing, prior to a ballast drop there. Drop the ballast too early, and the threepenny bit curve becomes set in stone. 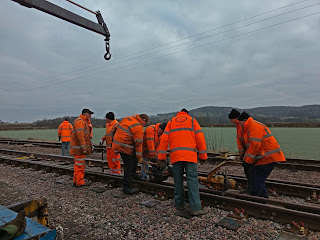 The rest of the gang, now about 10 strong, loaded up the tools and a TB2 chairscrew machine, which we took to the southern end of Toddington yard, where it was manhandled on to its trolley on the track we will be relaying, starting this week. 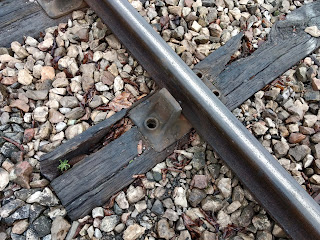 Here's the reason why - the sleepers are life expired. Some of the rail is also life expired (hence the replacement rail) and others will have their crippled ends cut off. 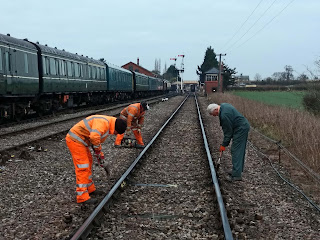 Only yesterday a last but well filled train ran along here, see how shiny the rails still are. We now have two months to refresh all this, including with new ballast.

Paul, Rick and Peter here are knocking out the keys, leaving an occasional pair in to keep the rails in their place for the TB2 to pass along. 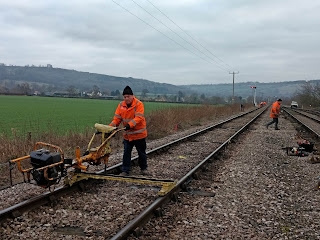 Martin on the TB2 worked all day on the machine, all along the Cotswolds side, and some way back along the Malvern side, until it started to get dark mid afternoon.

Today must be about the shortest day of the year (it's a bit later than 21.12, the winter solstice). 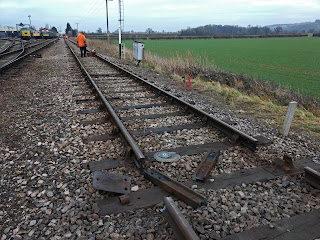 Dave D here did a bit of wrecking on his own. He made a start on cutting off the crippled ends. Initially only one end of each rail will be cut, the second cut for the other end comes at a later stage.
BTW, those short off cuts are still surprisingly heavy. 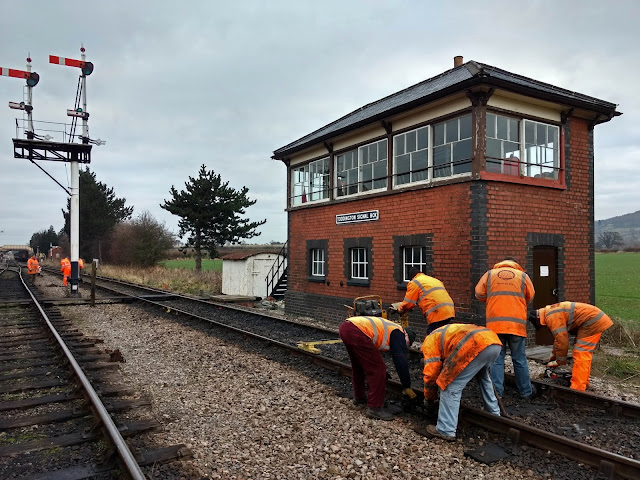 After lunch back in the mess coach at Winchcombe - word is that it will be parked in the loco yard by Saturday - Martin reached the signal box, closely followed by a gang removing the fish plates. 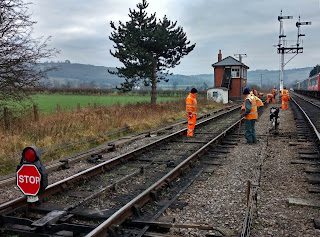 Paul and Peter on key removal are almost at the northern end of the site, with the rest of the volunteers still around Martin by the signal box.

Two volunteers also knocked out some of the old oak keys on the parallel siding on the right, replacing these with Mills keys we had spare. 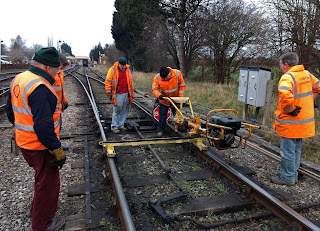 Finally Martin too reached the northern end of the relay site, here by the turnout leading to the loop. From this point onwards he switched to the Malvern side and started to work back. 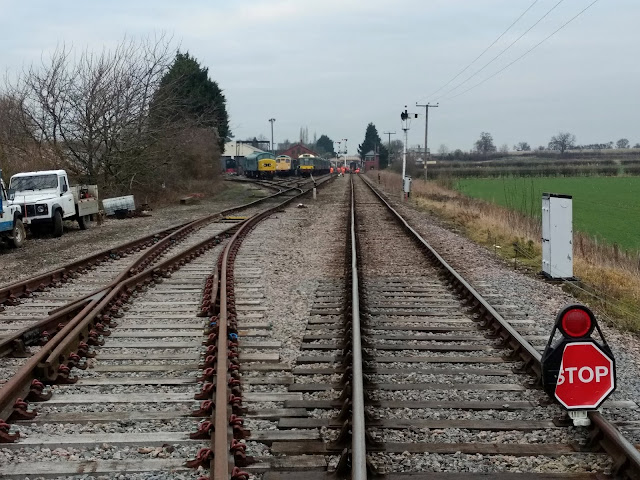 Here is the full site in view, with everyone at the far end. On the left is one of the two turnouts we laid during the previous closed season. Although useable in principle, they still await the fitting of the two point motors. Landies are parked on the left. The naughty boy one was persuaded to start using jump leads, so had to do some work after all.

Work here will resume on Saturday.


Monday in the loco shed.

More work on the newly acquired yard lamp from Dumbleton. 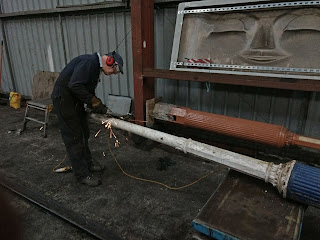 As John had all but finished the new platform, he started on the attachment points on the cast iron post itself.

Broken off studs here revealed that the original ladder and platform had been forcibly removed at some point. 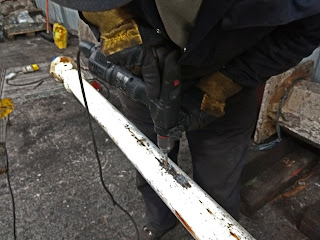 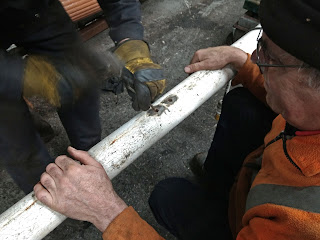 John drilled a hole right through the offending stud. Well, almost right through, because the drill bit broke off. Luckily we were already so far down, that we managed to knock the blockage through into the interior of the post.

Once and undersized hole had been drilled into the broken off stud, the remaining ring was peeled inwards and poked through, to reveal a rusty thread. 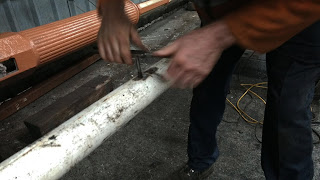 Neal then freshened up the thread with the cutter, to make it useable again.

There was a curious rumble going on in the diesel shed next door. What's that then? 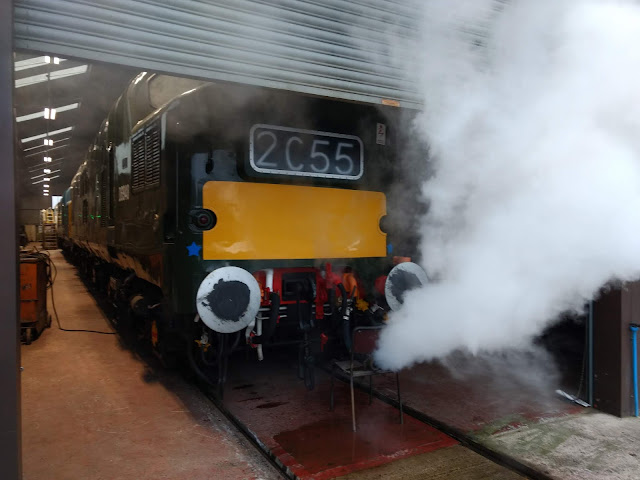 A large cloud of steam coming out of the door did not reveal a 'kettle' on trial, but this large class 37 diesel locomotive. It clearly has a steam emitting boiler on board...

Outside, stationmaster Rob was giving a shed tour to a group of heavily oranged enthusiasts.

Shed tours seem to be free, but a large bucket is rattled at you as you leave, if you get our drift. 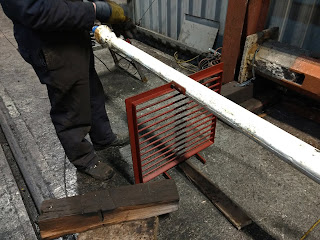 When we returned inside, John had trial fitted the new platform to the post. The brackets (still missing last week) were welded on, and the 4 bolt holes made fit for use again.

Question: How to you get the bracket parallel to the ground, when it is bolted to a tapered cast iron post?

Well, we don't know either. 'When it looks about right' seemed to be the answer.