In-out, shake it all about.

Friday in the loco shed

Four 'goal posts' done on Monday, so we have three more to go. Let's see if we can finish them today. 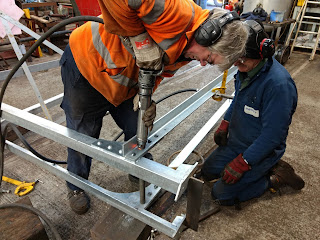 The day started well, much warmer and an extra volunteer, Steve.

The temperature had changed so quickly that it was warmer outside than in the shed, where we could still see our own breath. 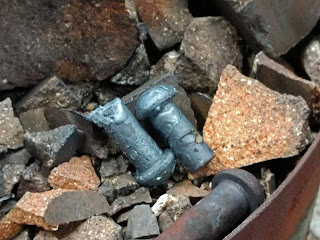 We set off at a good pace, but a bit too quick.

Two rivets got overcooked; they became 'iffy' and wouldn't go in. 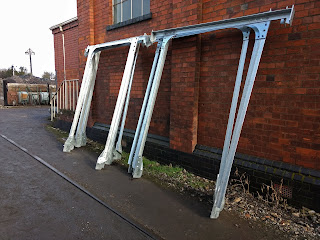 By lunch time we had done all of the remaining goal posts, and here all 7 are stacked up against the goods shed, ready to load on the Warflat. 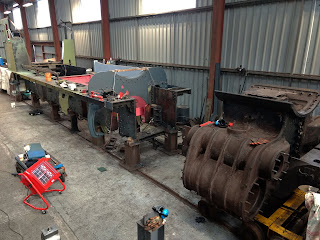 The Dinmore Manor gang wasn't idle either, they split the cylinder block from the frames of 3850 today.

Will the space created be filled by an additional driving axle? We are reliably informed that this is a new build project for a GWR 2-10-0, something never seen before. Aren't these GWR conversions now getting a bit out of hand? 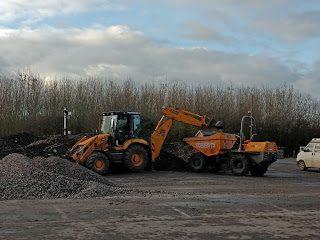 Outside in the car park Stevie was loading the dumper with both fresh and spent ballast.
The fresh went into the space he created at the southern end of the relay by digging out the remaining spent ballast. This latter stuff he used to build up the headshunt we lifted on Wednesday, with a bit extra from the car park.

Over tea the worlds of ballast digging and riveting / rivet removal met, and it was crowded in the mess coach. The Dinmore Manor gang was there in strength today. 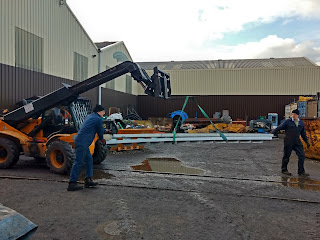 Here are two of the stringers being brought up. 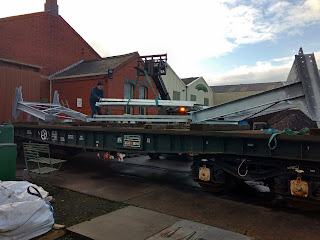 We moved the intermediate landing supports a bit further apart, and then laid the 8 stringers in between.

When will the Warflat be taken to Broadway? It's rather complicated to arrange, so you'll have to wait patiently.


Saturday on the relay.

Just a small gang of 10 volunteers today, compact but packing a punch. It was grey day, but not too cold, so good working conditions, at least to start with. 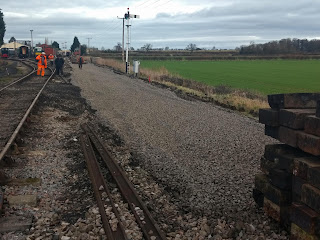 Yesterday Stevie had completed digging out the winter relay site, and putting down the final stretch of ballast. This is what we found first thing today.

All nice and level for the next load of sleepers. 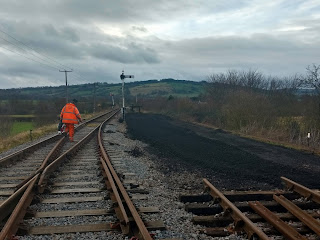 Looking south, here is where he put the spent ballast. See how black it is, against regular ballast on the left.

Pete on our gang was there when this stretch was first laid in the early 1980s. The track qualities were not the best even then, but it was all they had. Ballast was scraped together from elsewhere and pushed off a wagon.

Pete added that there was a 24 hour sponsored track laying session. They laid track south towards Didbrook right through the night and in the morning when the sun rose they realised how much they had veered to the right in the dark. 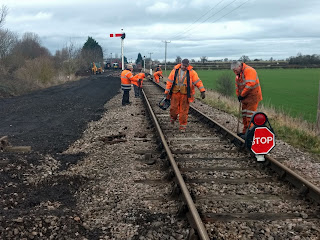 Today's job was a bit different, not the main winter relay, nor the headshunt. We were going to relay a two panel length just south of the new main line turnout. This is an extension really of the job already in hand, with the new turnout in between. This stretch starts at the stop board here. 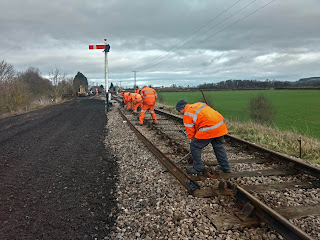 We knocked out the keys and decided to do without mechanical help to remove the rail - we just jacked it up and tipped it out. Simples. 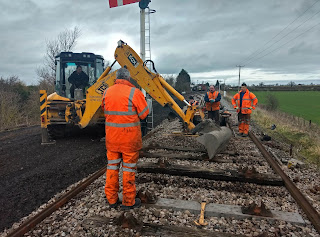 We did resort to mechanical help when removing selected sleepers - they are very heavy, and reluctant to rise, as bedded in ballast which sucked them down. 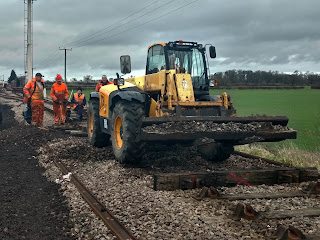 After Stevie pulled out the first few sideways, Alan came with the Telehandler and just scooped them up with the forks.

This stretch still has many ancient GWR throughbolters, one of the main reasons we are doing this. 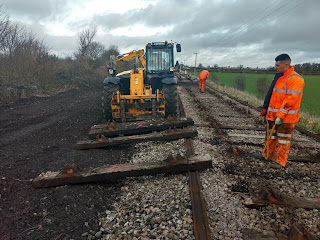 After a stretch of all throughbolt sleepers, they became more isolated, so we got some youth in - Hayden, to wit - and he yanked the offending items clear, so that a gang of 4 could move them sideways. 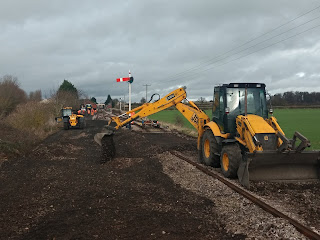 With the rails tipped out and all the sleepers removed, Stevie got busy and dug out the spent ballast. This consisted of a thin layer of new, on top of a worn out layer of black ash ballast underneath. This was all tipped into the headshunt area, as we wanted to raise not only that but the track running alongside it. 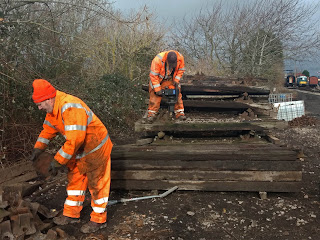 Meanwhile Bert Ferrule used the impact wrench to unbolt the chairs from the sleepers removed, while Steve here walked them over to a pile, for later re-use. 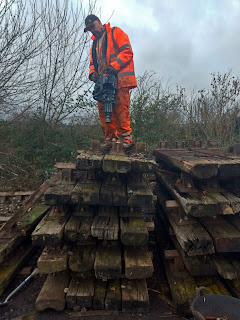 You can see in this picture that the sleepers, second hand when they were laid in the 1980s, are now no longer fit for use. And this was our main line. But that is why we are doing this relay. 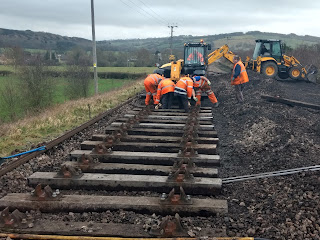 The best sleepers from both bits of relay were then laid into the stretch we lifted this morning.

This was manual stuff, necessitating a lot of volunteers to manhandle the heavy chaired sleepers back into place. 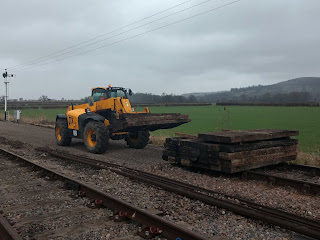 Alan got more sleepers from the 'KEEP' pile saved from the main relay site. 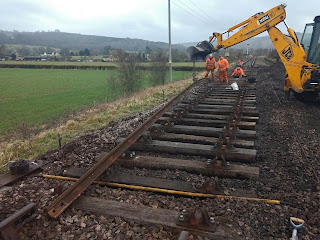 Soon we were able to lay the first of the 4 rails back in. 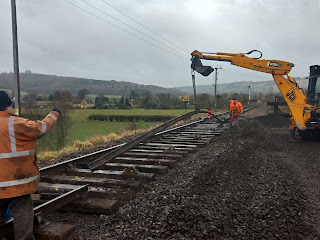 Refreshed by a light salad lunch (followed by heavy doughnuts and fairy cakes) we laid in the last of the 4 rails in the early afternoon. 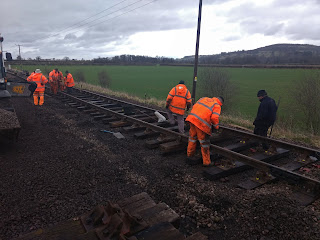 Here's the stretch of track we pulled OUT this morning, gone straight back IN. Haven't finished yet though, there is a lot of chair screwing down and keying up to do. 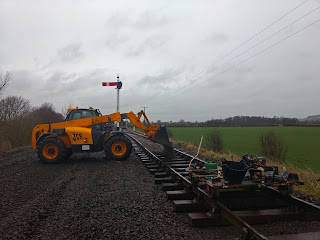 As Alan started bringing fresh ballast from the car park the weather decided to become a bit more hostile. Dark clouds started to arrive, signalling a steady drizzle which rained down upon us. 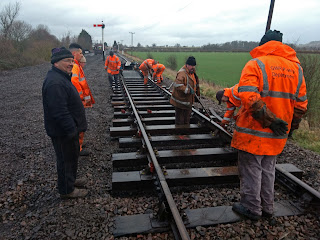 Here's the whole two panels back in, with Nigel and Bert putting in the last keys, the most awkward. It's getting darker and darker, thanks to the gathering clouds overhead. 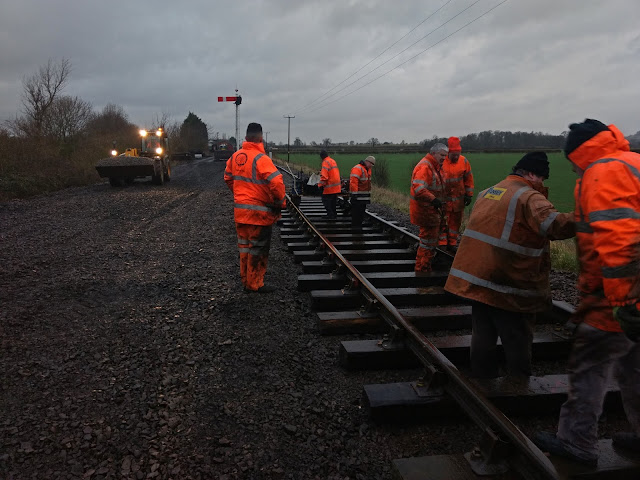 We were determined to finish off this two panel relay by the end of the day, and we did, despite the gloom. The rail is back in, all the sleepers laid in and all the chairs keyed up. Just ballasting to go now.

Stevie also increased the size of the raised bed and roadway leading to the headshunt. It's like the proverbial M1 now on the left. Alan is bringing a last load of fresh ballast, before we loaded everything back on to the trolley and trudged wearily back towards our train.