First track back in

Stevie said on Wednesday that he would put down a layer of fresh ballast by the box, and that he hoped to lay the first 4 panels of track back again on Saturday.

Incredible idea, but we did it! 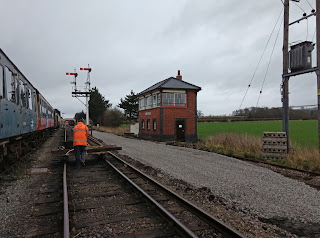 Here is Stevie's layer of fresh ballast in front of the signal box, waiting for us this morning. 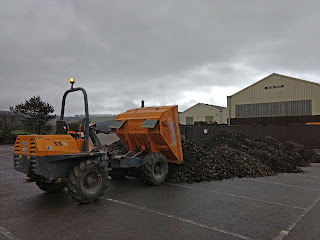 The dumper took away a last 6T load of spent ballast and tipped it on to a growing pile in the Toddington car park. 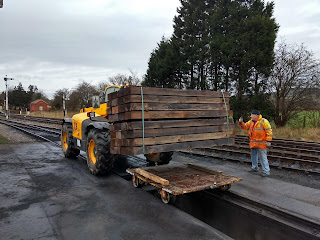 The Alan grabbed a large bundle of new, creosoted but softwood sleepers and put them on the Permaquip trolley which we had parked on the end of the disposal pit.

With a lot of heaving and shoving we propelled this not inconsiderable mass over two sets of points, and ran it down to the work site. 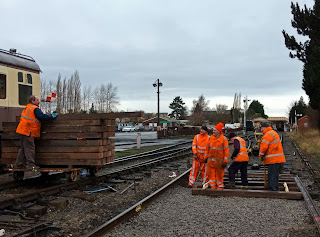 Here Nigel was waiting for us, together with a gang of 4 hopefuls for a little light sleeper action.

While we were unable to complete the sleeper run with mechanical laying, this was nonetheless a method that worked. It did mean that every sleeper was laid by hand, but heigh-ho, we took turns and got through the day. 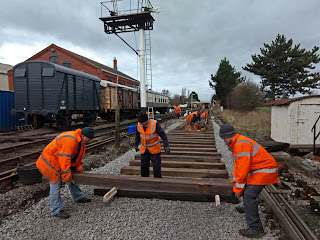 Jack on the right here for example was a willing volunteer.

We didn't tolerate any complaints about weight, as the sleepers were softwood ones... can't be heavy then. 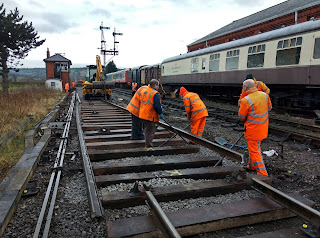 Once a sufficient length of new sleepers had been laid out a first length of rail was dropped in on to chairs set at 6 sleeper intervals. We will fill in the rest on Wednesday. 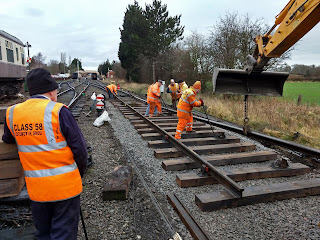 In view of the signalling equipment being abundant in this short stretch, we had to lay in the rail from one end, using out trusted and tried 'Fulcrum' method.

John is keeping a careful, supervisory eye on all this, wearing his best class 58 vest. 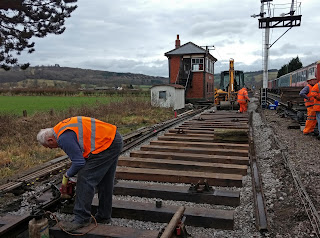 We're now cutting off the other end of the rails (where crippled) so here is Neil on the rail drill fitting one rail with new fishplate holes. 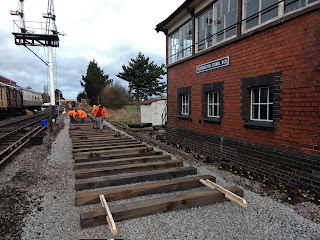 By lunch time on this dreary, drizzley but warm day we were outside the signal box - whoopee!

Great progress, it's all coming together nicely.

The bits of wood in the foreground are spacers for the sleepers. 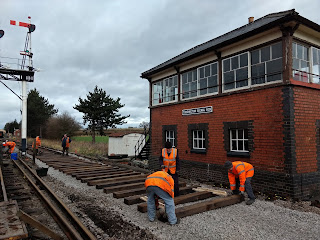 You put half of the spacer in the previous crib, and then the other end tells you where to lay the next one, as Jack and Chrisman are doing here. 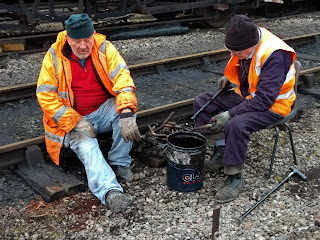 It's a tiring job, so from time to time we had a bit of a rest.

John started greasing up the chair bolts, and one of the frequent loco dept. visitors took pity on him and came out with a chair. How very kind of him. 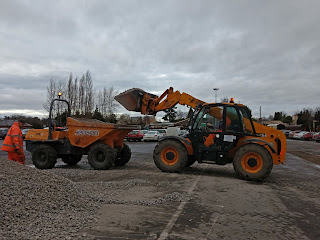 When he wasn't loading bundles of sleepers on to the Permaquip, Alan had the bucket on front and replenished the dumper with fresh ballast.

That's another big pile in the car park, although at the end of the day it was a rather small one. 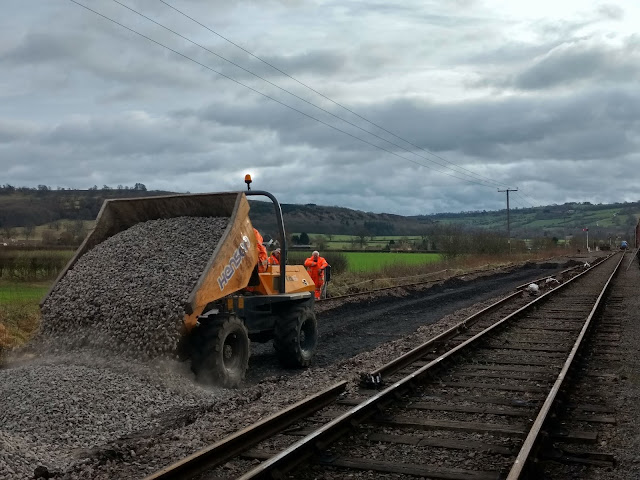 Bert took the dumper load of fresh ballast along a recently dug out piece of trackbed and increased the length of the pile there. Steve then jumped in with the JCB (when not lifting in rail) and leveled it out. 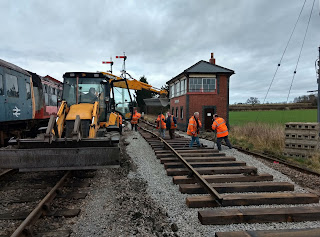 Mid afternoon we were actually past the signal box, where Steve can be seen lifting in the first rail in the fourth panel. 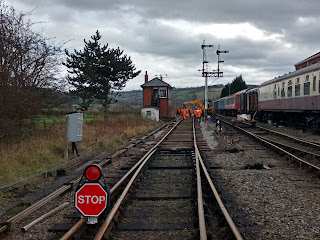 Here is the view from the start this morning. The rail head is already quite a way away. The track is still a bit wobbly, it needs some 'tweaking'. 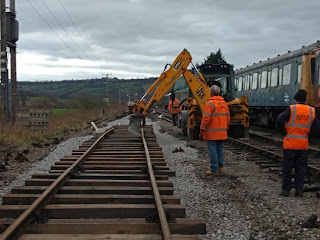 No issue for Steve with the JCB of course. By now it's getting dark, and the shutter speed is a bit slow for perfectly sharp pictures. Sorry about that, but better than no pictures at all. 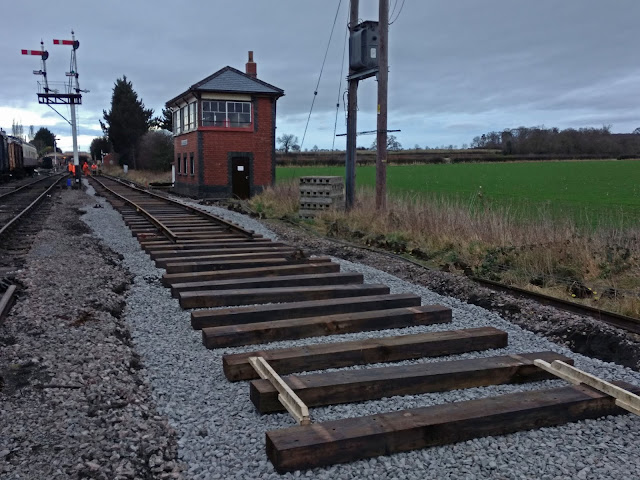 Here is where we stopped. The 4 panels we set out to lay are in, and even a few more sleepers laid out along the 5th one (of the 20 to do).

A small gang of two will work on Monday and Tuesday to dig out the rest of the old ballast, and replace with new. This will allow further sleeper laying on Wednesday for some of the gang, while others can insert the remaining chairs on panels 1 - 4 and screw them down.

No progress on the footbridge steps, which ought to be at Broadway now but are not. 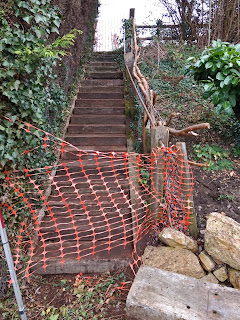 At Broadway itself the contractor is close to completing the placing of the drains for the forecourt and drive. Once that is done, 'scraping' can take place, meaning that the level of the forecourt will come down sufficiently for a proper base for the tarmac to be laid, while still remaining below the level of the kerbs.

In the meantime, another contractor came and worked on the old steps that lead to the very top of the drive. These are located in the far corner of the car park, and they used to give a short cut access for the stationmaster and the staff living in the 4 cottages there down to the station, without having to walk down to the junction where the upper part of the drive meets the start of the forecourt. 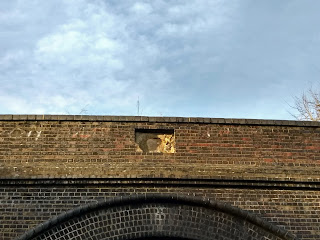 There's not been a rush of replies about the date stone over the tunnel mouth at Gretton, and indeed Hunting Butts.

It would be helpful if someone could point us to an old photograph that shows the date stone in place. It seems to have been missing since at least the 1960s, and it is still crumbling today. Was it flush with the brickwork, or proud, or set in? What date was on it? Audie Baker's book suggests that the tunnel was completed in the winter of 1905/06, so which date was it?

We would like to do something with the hole that is there now. Either brick it up to stop water ingress, or else replace it with a replica date stone. Come on, look in those old books...