All the materials needed to complete the two turnouts at Broadway north have now been delivered, and today work resumed on the complicated interplay between them, as the two tracks gradually converge. 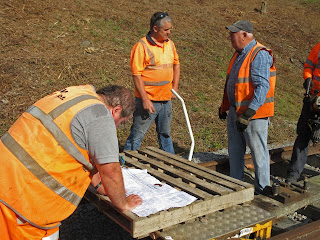 Laying out the two turnouts needs a fair bit of thought. We have a drawing - only one exists for left and right - and if your turnout is the other way round, you just have to treat it as a mirror image.

The turnout to the loop is ex Laverton, but there it faced the other way. It was labeled up, Malvern and Cotswolds, but this is now the other way round at Broadway.

Are you still following this? 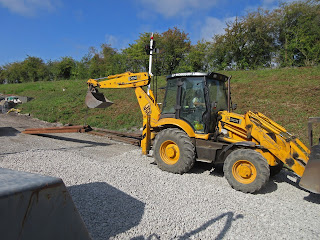 First thing Steve started to bring in some of the new timbers. We cannot use all of the old ones, as this will be a pair of turnouts linked together, and a number of the timbers will be different. These new ones here are nearly 6m long, this length being necessary to support both tracks at once. 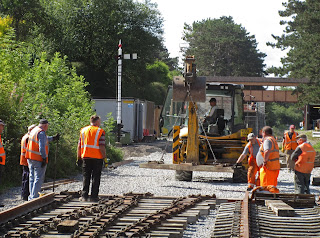 Here the first new timber has been laid out, and it is followed by a second, which is one of the originals again, in alternating order. They have to be so laid out that they are a precise distance from each other, essential as the position of the base plates on them is critical for fitting the rail that is on the curve leading away. 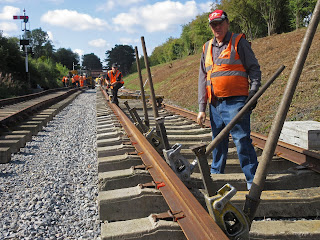 While one team lays out the new timbers, a second is engaged on alignment of the siding. This needs 'tweaking', in this case moving over towards the Cotswolds side by an increasing amount, terminating in a  move of 300mm at the crossing.

We've got a battery of Duff jacks going here, placed at an angle to move sideways as well as lift the track. 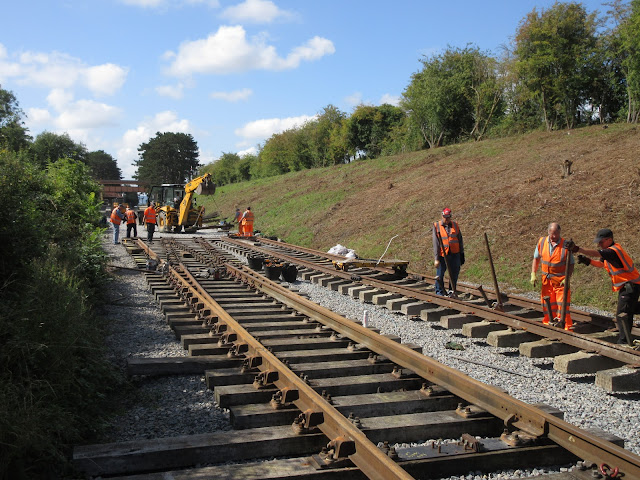 You can see the track suspended on the right, as Leigh gives it an extra heave on the jack. When it runs out of ratchet, we move the last two forward, leapfrogging the first two, and so on down the line. 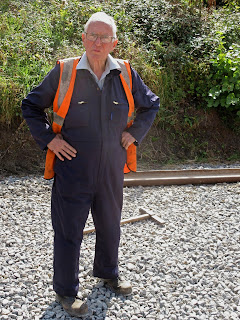 All this is surveyed by John (whom you may know as one of the regular DMU drivers) who delighted us today with a special event: the christening of a new pair of overalls. We had been pleading with him for weeks, as on the old ones the cloth was so thin that they had split across the rear end and were surely no longer legal (we felt). 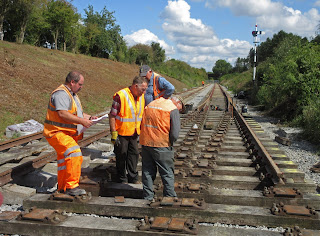 Here we have a first rail in for today, the one on the right. The siding on the left however still has to be shifted further right, so that the concrete sleepers start to intertwine with the wooden timbers. The session with the jacks was completed, but on reviewing the result, it was felt that bigger means were needed. More of that later. 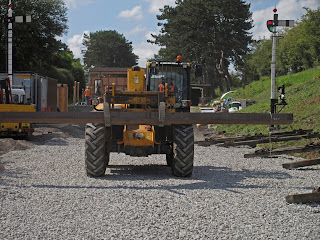 After checking with the plans, Alan was instructed to fetch one of the new timbers with the Telehandler. 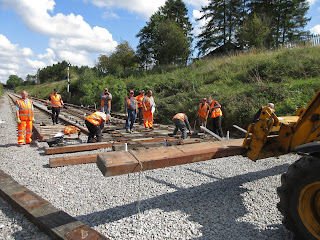 It will go on the end here, the third new one of the day, with ex Laverton ones in between. 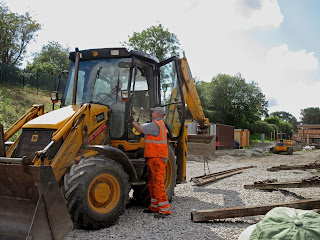 In the meantime, Steve has been instructed to fetch two more turnout rails from Laverton, and is being interrogated by Bert on arrival here. Has he got the right ones? Is he sure? They all look the same. Steve is sure. 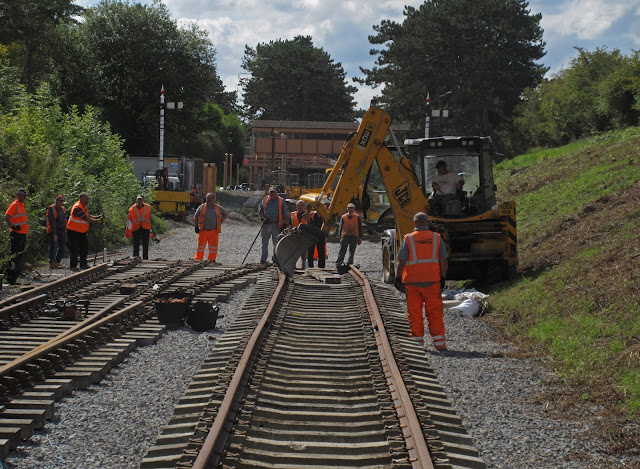 With Steve back, he becomes our secret weapon to move that storage siding a decent bit over. It's just too slow with the Duff jacks. He's already given the end a push, and you can see here how far it has to go. The concrete sleepers have been loosened and moved forwards or back a bit, so that they fit in between the timbers that were added. Bert gives Steve the hand signals, while the others look on in a semicircle. Well, it's interesting, isn't it. 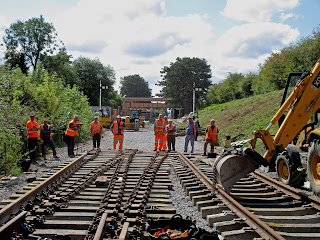 More nudges from Steve on the right, and on the left you can see the main line to loop turnout clearly starting to diverge, with the site of the future crossing in the middle where it stops at the moment. 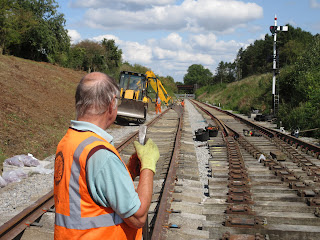 Steve is working his way down the siding for about 100 yds, watched by Peter with the bar.

The convergence between the sleepers is now plain in the foreground. It's all beginning to take shape. 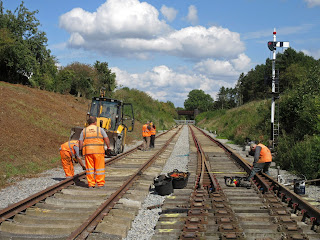 As Steve finishes the 'tweaking', Nigel has a quick measure up with the tape to make sure everything is in its place. 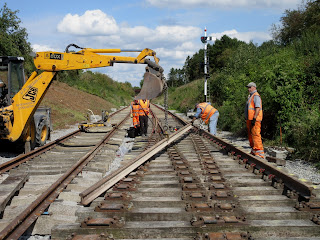 With Steve free again, we can now lay in another rail. This is a tricky one as it's on a curve, and the rail on the right, clipped up, may have fitted, but that doesn't mean that the second rail will automatically fit its curve. 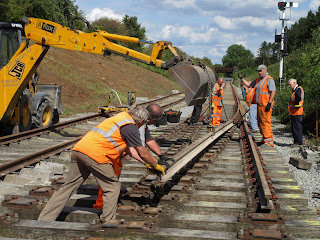 There was a fair bit of to-ing and fro-ing with the sleepers before that curve rail went down into its bed. It was very satisfying to clip it up, and prove that the sleepers were now in the right place. 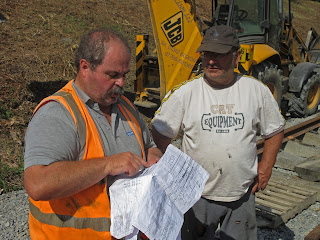 Time to consult the master plan again. What number did you say was on that base plate? What number sleeper is under it? It's quite tricky to assemble the turnout right, remembering that there are two, we are in the bottom of a cutting, and as it's double track, we can't stand next to the rail with the JCB. You have to think ahead, and bear the logistics in mind. We have to build the two turnouts in an order that makes it possible for the handling machinery to continue accessing it. The stuff is heavy, not just the 6 metre hardwood sleepers or the 1 ton rails, but even the base plates that go under the rail. Those in the middle weigh 60kg each ! Throw me a base plate - yeah, right... 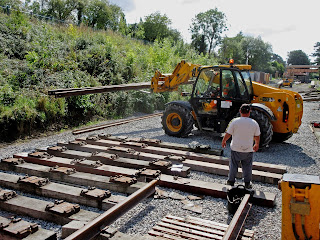 Mid afternoon it's time for the crossing to go in, the 'moment supreme' in any turnout construction.

Here Alan has brought it down with the Telehandler, and is manoeuvering it into place so that it can be lifted in the right way round. 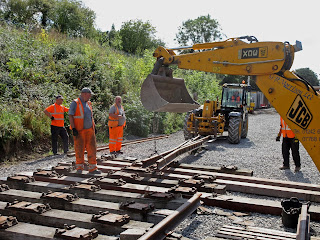 With Steve lifting the northern end a few inches off the ground, Alan slowly pushed it along from behind using the forks. All very controlled and precise. 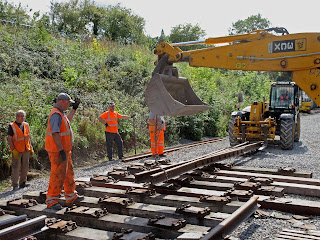 Here the crossing is almost arrived at its destination. Bert waves it on the last few feet. 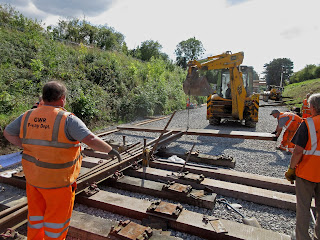 With the crossing in place, 'tweaked' and clipped down, the last two big timbers can be laid under the end. Again these are so heavy that the JCB has to be resorted to to lift them. Bert guides one into place, as Nigel instructs Steve in the foreground.

With this crossing in place, we have reached the place where the other turnout, from the loop giving acces to the siding and facing the opposite way, meets the turnout we have been building, a sort of half way point. We felt that this was a good achievement, and agreed it was time to stop on this very hot day. The final result can be seen below on the overview: 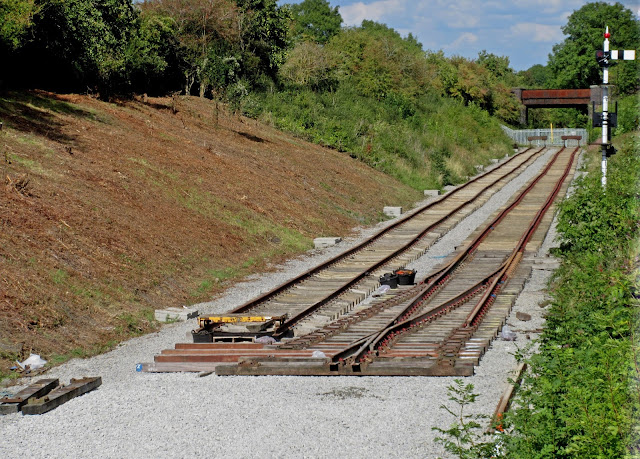 Can you imagine a second turnout on the left, meeting the first one in the middle? The position and need for the new timbers, coloured tan, is also clear here. They reach right across and join the two turnouts together.

At this point it's time for a service announcement, to say that your blogger is off on his annual fortnight's holiday now. You'll have to be patient for two weeks until the next instalment. That is not to say there will be a pause in the work, quite the contrary. The construction of this crossover is estimated to take three working days, so it should be just about complete when the next post goes up, on or around Sept 20th. In the meantime, we commend to you Nigel's excellent Flickr site to follow progress:
https://www.flickr.com/photos/gwr_permanent_way_photo_log