Back from gone away

The holidays are over, now it's back to the shovel.
Four extra kilograms of Pizza, Pasta al Funghi, delicious Italian ice cream and wine by the litre have to be worked away too. The PWay is your free gym, if you care to join.

Here's a little round up of progress since Sept 2nd: 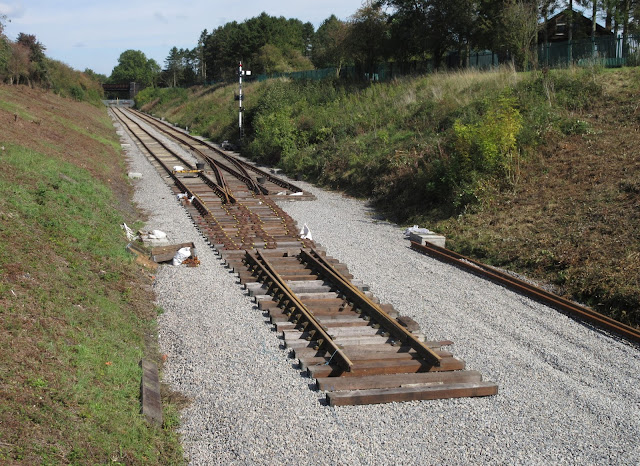 This is the classic shot you wil have seen on Nigel's Flickr site. The second turnout is coming along nicely, and with the crossing now in you can see really well how the track will run at this point. Locos that came in with a train from Toddington will proceed to a point beyond the inner home at the top, and then reverse on to the loop in the foreground, and run round.

We're also thinking ahead, where do we go after the two turnouts are in? 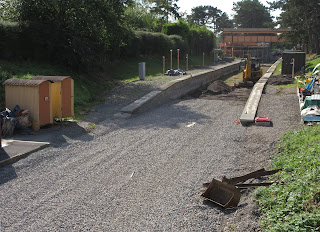 In fact the whole area in the foreground here has now had its foundation of ballast, to bring it up to track laying level. This used to be a big hole, occupied left and right by BAG storage sheds.

All the container storage on platform 1 in the background has gone, and the space filled with the running in board posts, and lamp posts, that belong there. We're still waiting for some additional 12 inch lettering to make the name boards. 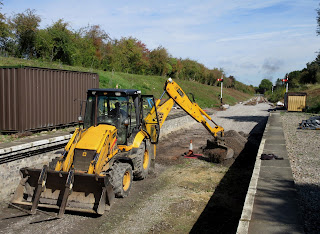 Stevie has now ventured into the space between the platforms for the first time. This surface here is contaminated with clay and building waste, and needs to be scrapped off back down to original, clean ballast. It will then be back filled with new, probably next week (these dates change, so don't write in) 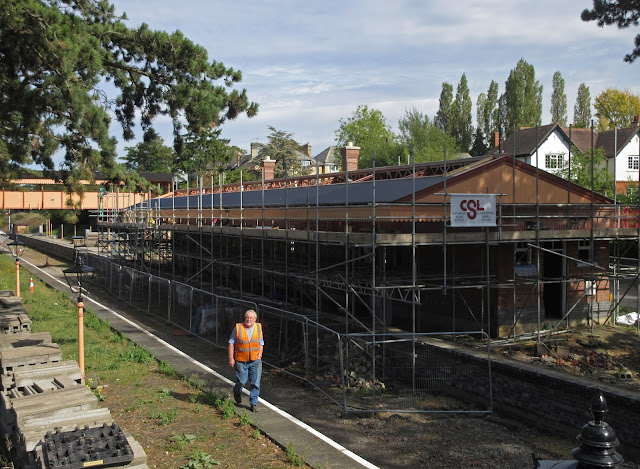 Proceeding down the trackbed, we see the station building now coming along really well. One complete row of heavy duty, powder coated sheets has been completed on the platform side. The second row awaits the contractor that will fit the glazing, with glass of the correct original colour and glazing bars of the GWR type. On the forecourt side the sheeting has, in both rows, reached the level of the first chimney at the time of writing. 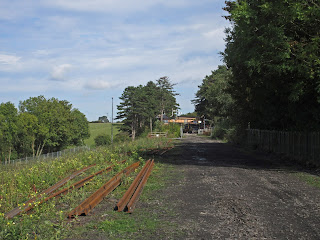 Further along, by the former goods shed, Stevie has laid out the remaining new rail, more or less where it is going to go. The main purpose of doing this was to release the rail wagons though. 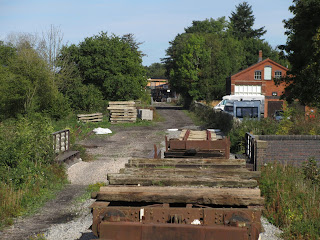 The extension train has been out and about ballasting, but is now parked back up at the rail head. Rail and sleeper wagons are currently empty, pending delivery of further supplies for the platform roads. 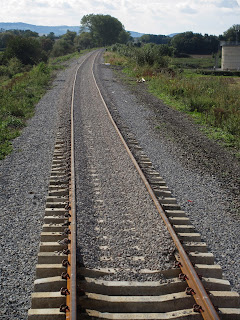 South of the extension train the line has had several drops of ballast on it, so that we are now have a first level of ballast, ready for tamping, all through the third 1000m stretch of CWR, past the breather and almost up to the Childswickham Road bridge.

Tamping and stressing this last stretch is pencilled in for October. No doubt we will await a nice rainy day for the massive clipping up after the stressing!

The sewage plant can be glimpsed on the right, and before the trees at the rear you can see the pilasters of Pry Lane bridge. It's just a short hop to Broadway behind the camera now.

And so on to today's activities.

As usual, we started the day, not with a plate of Special K, but with a lively discussion over tea and doughnuts in the mess coach. Officially this of course is a briefing session, but we all know what is most important here. Dave, foreground, is deep in thought about the relative advantages of Asda against Tesco sourced delicacies.
As we munched and slurped Andy held forth at length about a pet project which, if we lift the veil a tiny bit, involves large supplies of scrabble tiles and strong glue. We can say no more, except to point out Paul's reaction (rear centre) where facial expressions can say so much more than words. 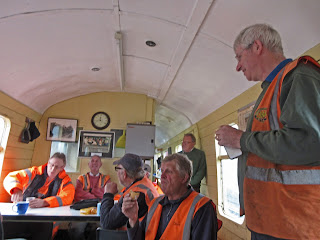 We decided to split into 3 gangs today. A plan to recover more sleepers was scuppered by a potential bearing issue with the Telehandler, so two gangs set off to effect track repairs at Toddington and Winchcombe, while a third prepared to lift and pack the Cotswolds side road leading into the loco shed, where a last area of floor remained to be concreted. 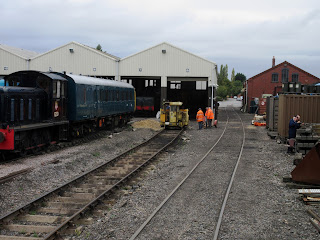 This was to be a good opportunity to use the jacker packer now stationed on the GWSR, and a large supply of ballast was ordered in, which also provided a good, elevated base for your cameraman to take this photograph of the area to be treated. 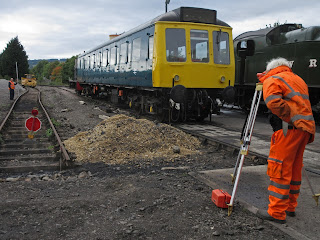 It was agreed that Steve would bring down the JCB from Broadway, and 'tweak' the track for us. This meant removing some spoil from the side, and ladeling the ballast over and into it, ready for packing.
While waiting for Steve to sort a small unloading job at Broadway first thing, we filled the time by measuring the size of the dips to be filled. 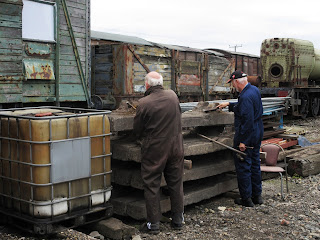 A steady hammering and scraping nearby revealed that members of the loco department were cleaning off the remaining sleepers that still needed to be laid to connect the outside track to the inside. 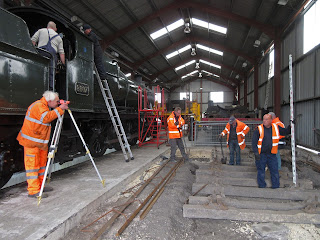 As there was still no sign of Steve (which was unusual, as his tea was getting cold) we used the time fruitfully by measuring up the inside as well.

It turned out that the floor prepared for laying back the sleepers was a tad high, and needed further scraping. 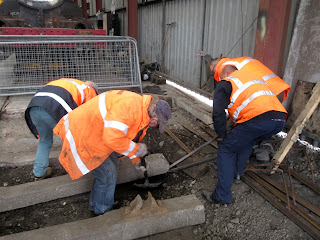 It's not easy getting a sleeper in place to sit any lower. You can lift and pack, but you can't drop a sleeper down any further. Or at least not easily. We levered this one up, and dug around underneath it, with mixed results. It went down a bit, but not enough.
And where is Steve anyway? He should be here by now.


Clive finally cracked and gave him a ring.  It turned out that Steve, expecting a 5 minute job, was spending all morning waiting for the supplier to arrive. Very frustrating, he was chomping at the bit. 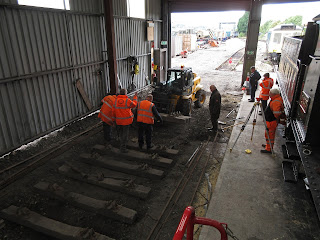 The loco department were supposed to relay the inside of the shed, and us the outside. In the absence of Steve, we decided to make it a joint action, using the loco department mini Telehandler to further scrape the trackbed, and bring in the sleepers cleaned earlier. 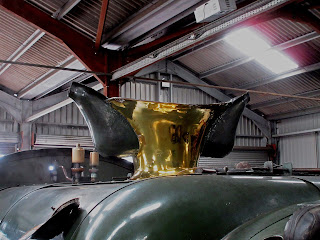 Here's an unusual sight from the top of the steps by 2807 - this season, safety valve bonnets are being worn the other way up. Very fetching.

Finally, finally, in the middle of lunch time Steve turned up, flustered.  The delivery lorry came at the very end of the morning, and he was finally released. He set to work immediately, and our spirits perked up with this flurry of action. 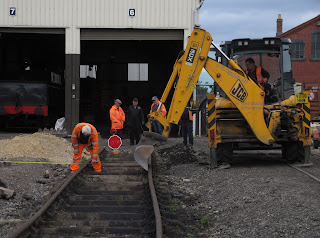 The side of the approach road was quickly dug out, and in a few minutes this length of track was lined up with the loco shed door, and made properly straight. Clive (PWay) and John (Loco dept.) survey the scene in the centre. 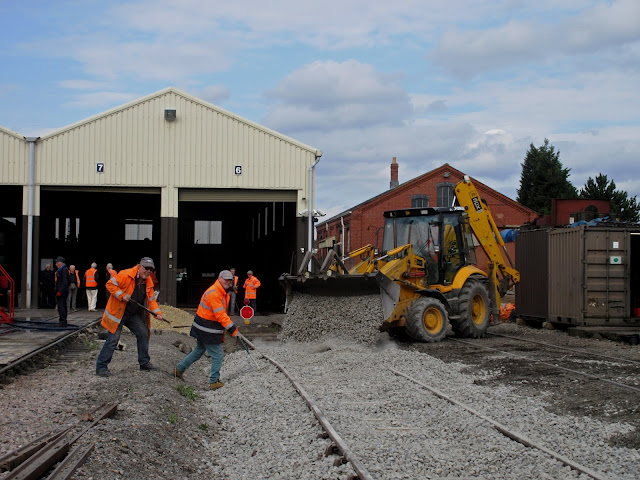 Steve then dropped in the 40 tons of ballast from the big pile. He is such a good judge of this, the size of the pile was just right. Julian raked the ballast off the rails so that the jacker packer could pass along, while John (left) winked to the cameraman about his dastardly intentions, to punish Julian for not laughing at all of his jokes. 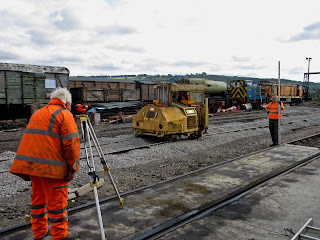 With all the ballast dropped in, Martin was able to bring in the jacker packer and lift the track according to the information shouted over by Peter and Doug. 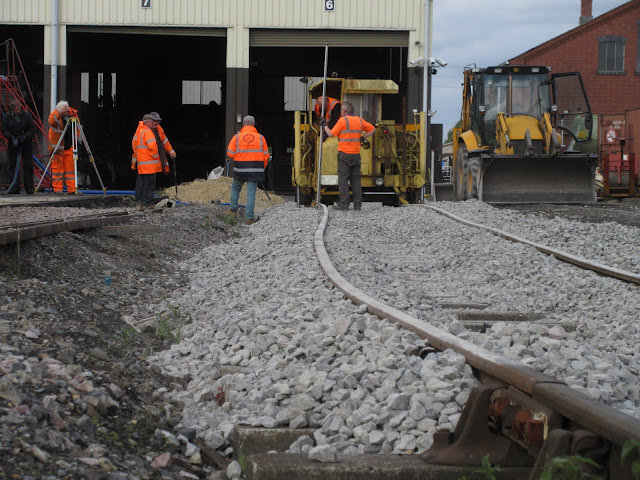 Seen from rail level, you can see the machine working to bring the track level up to that in the centre. Next week you'll get a link to YouTube which will show this curious little machine in action. It takes about 3 hours to upload, which would bring the posting of this blog way past your bed time. It took 3 hours last night for example to upload this video of a hydrofoil spotted while in Italy - a magnificent machine:
https://youtu.be/rUH4KHCMs6c

Back to the PWay - this is as far as we got at the end of the afternoon. With only really half a day available to work with, we tweaked, ballasted and packed most of this stretch of track, but not quite all. There's a bit more to do. 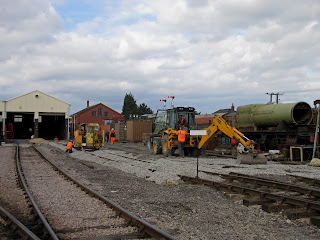 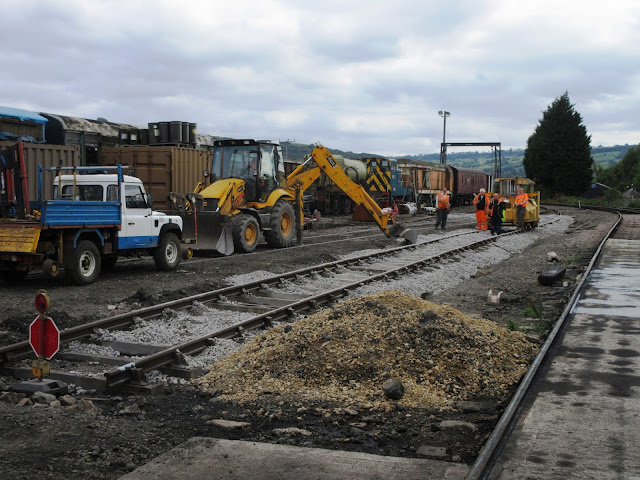 The short stretch of approach road needs to be straight and level, as it will shortly form part of the apron outside. Gone will be the time of walking around and working in clouds of ash.