There's not been a Saturday update at the weekend, because your's truly has been on another jolly, this time with the CLPG to Minehead. Tsk!

Great was the surprise of the Minehead station master when the 1.15 from Bishops Lydeard drew in. Instead of a Hall or a Manor, it was CLPG's toy: 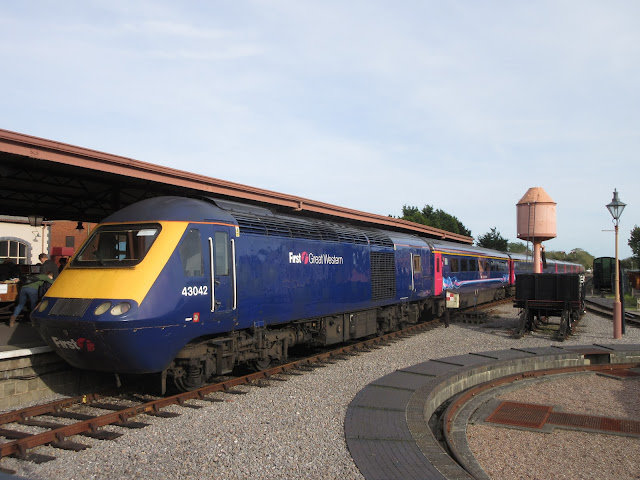 Whoa! Is that GWR? Well it says so..... must be legit then.
Inside people were canvassing passengers to help buy one of these. Wonder where they will keep it?

So Saturday was a day off, but today, Monday, was not. Steve has been making a start on refreshing the ballast between the Broadway platforms, as we will soon be laying track here. The purpose of today was to sort out some bullhead rail - yes, bullhead - at Stanton, so that we could lay at least one of the two roads through the station with second hand rail we have in stock.

As usual, Steve was much in demand and the first thing he had to do was lay a set of drainage rings behind the former access to the platforms. A number of stormwater drains meet here, before passing under the platform wall to meet up with the centre track drain already in place. This eventually passes under station road and empties into the Broadway Brook at Childswickham. 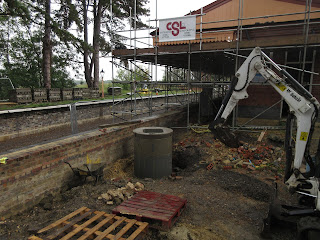 Here is the tower of rings placed this morning. A final hatch cover still has to be placed, which will bring the whole thing up to platform surface level.

Now that this tower is in place, and with a few more drain connections to be made, we can fill in the void behind the platform, using the scrapings of spent ballast from the north end. 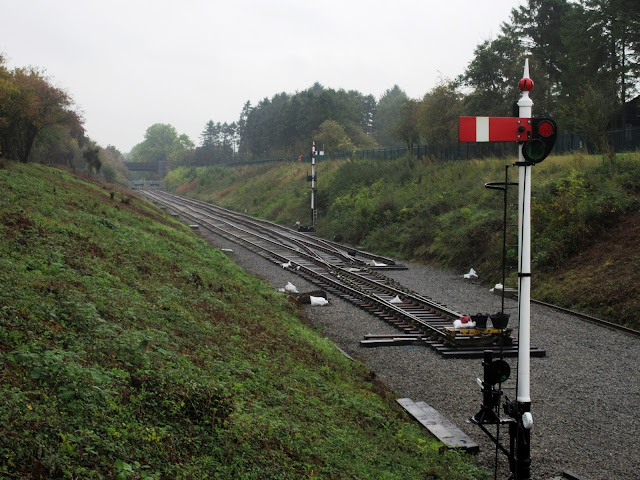 The saturday gang hasn't been idle either as you can see from this photograph taken during the obligatory teabreak, taken in a jolly atmosphere with the rest of the Broadway gang in their mess hut. Together forward!
Saturday's PWay work here involved fitting the switches to the nearest turnout, and then fitting the Malvern side stock and closure rails (two plain rails, basically the bit that goes straight on).

We hope that one more day's work could see this turnout completed. Then it's plain rail again, in the direction of the platforms. For this, we need bullhed rail, which brings us to - Stanton. 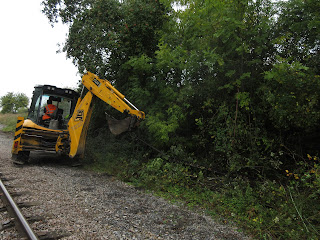 There was a report of bullhead rail in the undergrowth here. See it?

Steve had a good sweep at the greenery with the bucket, with moderate success. That stuff is so persistent. Bramble, Hawthorn and Rose bushes shred your hands at the slightest touch. 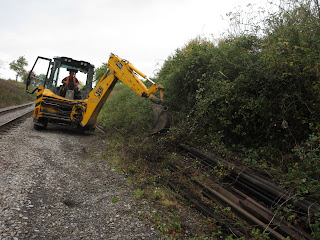 Eventually Steve managed to reveal a well hidden pile of sundry rail, some flat bottom and some bullhead. Some of it was ex running line at Chicken curve, so not necessarily of bad quality, and the job today was to sort the wheat from the chaff for Broadway. 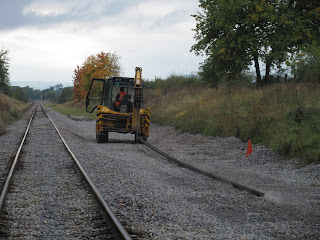 We need 14 pairs of rails for one length of track between the platforms, and the conclusion was that we had this. Here Steve is dragging the first one out to a loading area. The nature of the second track still has to be decided (new or second hand). 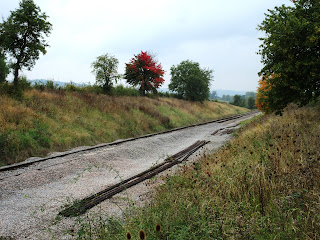 We finished the day's work with about half of the pairs dragged out, with more to do later in the week, but probably enough for a single track on site.

From here they will be loaded on to a bogie flat and taken to our unloading area by the Childswickham bridge.


Tomorrow we will be back at Broadway refreshing the ballast between the platforms.

In the last blog post a film of the Jacker Packer was promised, and it has now been uploaded. Here it is:
https://youtu.be/r7lPeT6mqj4

Enjoy this unusual and not very common machine. It will be out again on Wednesday.