Further into the platforms

A very showery morning was forecast today, and at Broadway, only the ballasting gang appeared. Out on the road on the way to work it was absolutely bucketing down, so to start with we decided to have a cup of tea and see what the weather would do. It cleared up! No worries then, got to stay optimistic.

We then had a fine old time, and advanced the job further.

It's stopped raining, but have you still got those waterproof trousers? 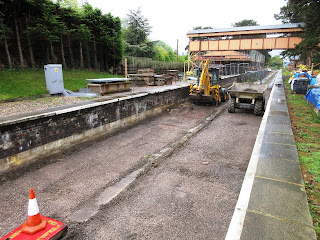 To kick off, we finished scraping out the third section of the 8. This is now ready for trips with ballast. We're rather further into the station site here. 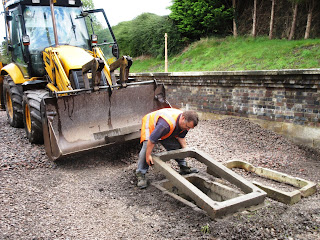 The catch pit in the foreground above needs raising now, and the top ring replacing, as it is broken in several places.
Thanks to our excellent drainage man Andy P we now have access to a supply of these, as well as the necessary concrete covers.

Here is Steve manhandling a new one on. It can then be surrounded by ballast, carefully so as not to push it over. It's a fact of life in railway preservation that old things are imperial, and new kit is metric, and so it is with the catch pit rings. They don't quite fit each other! 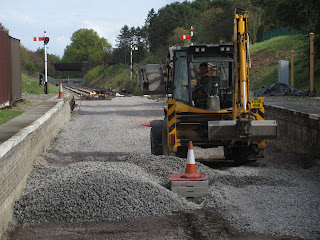 After the first few loads of ballast were dropped nearby, Steve came along to spread it around, so that the catch pit top was level with the surrounding ballast just dropped. In this way it's nice and snug, and less likely to move.
From now on we are going to run astride the catch pits, instead of down one side of them, to avoid the rings being pushed over. 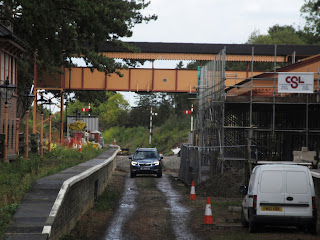 Just as you drive down that narrow alleyway, you meet an oncoming vehicle. What? Don't they know there's a dumper about? It did a 3 point turn on the trackbed too. 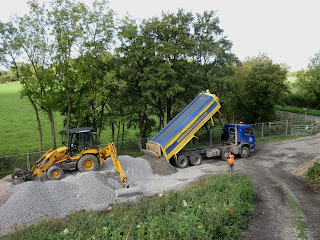 After sorting out the catch pit, we tackled the serious job of ballast ferrying.

We were just starting to make a hole into the pile in the 'car park',  (pat on the back here) when the first of several more loads arrived. No pressure then... 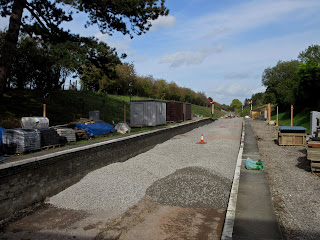 This is what the site looked like, after back filling to the concrete rings (see the road cone) and adding several more drops in the foreground. Another catch pit is just off camera in the foreground; after that, it's the scaffolding. 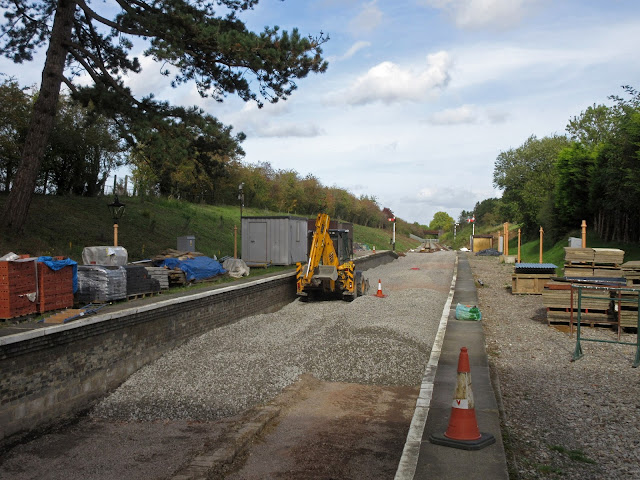 Before finishing the day's work, Steve came up from the car park to level the piles, and create a slope at the southern end, which will allow PWay vehicles to reach the railhead in the background.
Another reason for the slope is that Steve will be dragging rail up past here tomorrow. 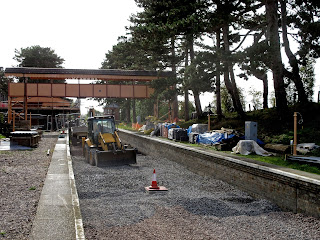 Looking the other way from the same spot, you can see how far we've come. We have nearly filled the third of the 8 sections.

The dumper in the background is parked hard up against the scaffolding, which we hope will come down in a fortnight or so.