Advancing between the platforms

Another fine day today, perhaps an Indian summer? It enabled the ballasting gang to crack on, unhindered by rain or punctures. We did well today. 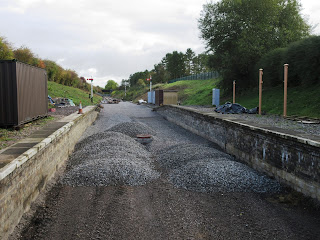 We ballasted between two catch pits yesterday - that's 30 yards, out of 220 or so between the platforms. The next stretch was already scraped, so we could start tipping ballast here straight away. 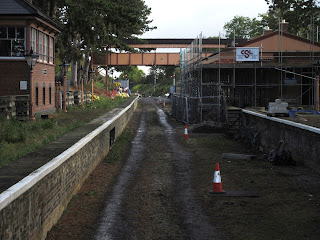 It's a long journey from the car park, and the dumper has to go down this narrow channel, faultlessly, every time. And back in reverse!

At the narrowest point there are barely 6ins each side of it.

That part of the scaffolding that stands on the trackbed should come down in a fortnight or so.

Interesting also is the wetness of the wheelmarks, which illustrates the lack of drainage that we are curing by scraping off the spoilt ballast all the way through. 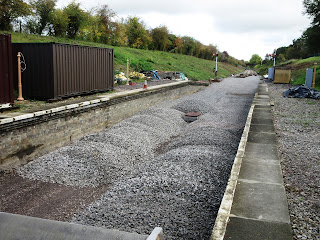 No punctures today (there are many traps for the unwary tyre) so we got off to a flying start, as you can see here. 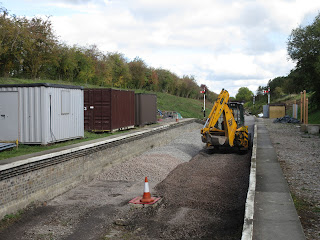 Approaching lunch time, we had filled in the second 30 yards, and we see Steve here doing a first pass with levelling the piles.

There are 9 centre drain catchpits, with 8 stretches of 30 yds in between. The road cone is on the third catch pit, so you can work out for yourself where we are. 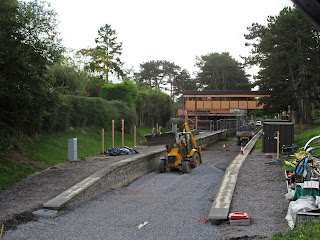 This is a shot from the platform 2 starter signal, and it shows Steve at work levelling the first 60 yards. The conclusion was - not bad, but there are still a few low spots. A job for tomorrow. 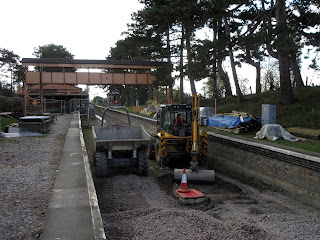 After completing the second 30 yards, we set about scraping off the third section of the 8. Behind is the footbridge, which is getting nearer and nearer. 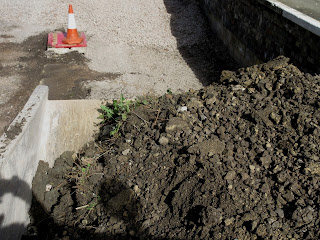 To illustrate the quality of the spoilt ballast, take a look at the vegetation and caked clay in this bucketful!

Some flowers like well drained soil, but so does a track that wants to last a long time. We are on the case. 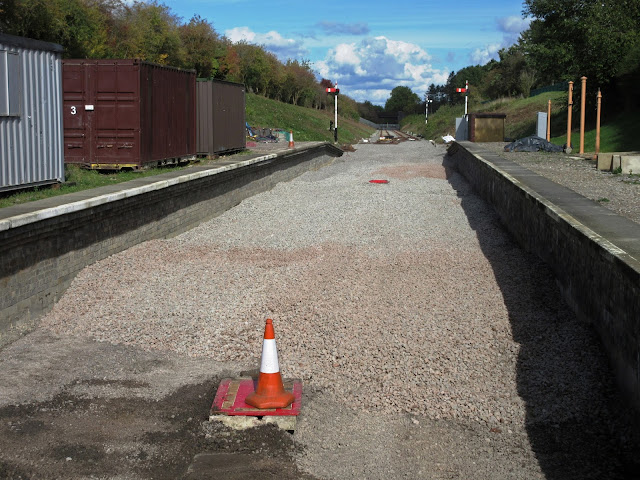 An overview of the first 60 yards. Not quite ready yet to take track, but a great start. We still need to fill in some low spots, and when we get to to the area with the scaffolding, we're going to hire in a roller to compact the sub sleeper layer. We don't want any settlement here later on. 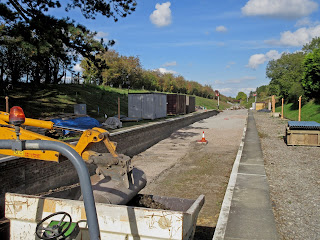 In this picture Steve has nearly completed scraping off the Malvern side of the third section. 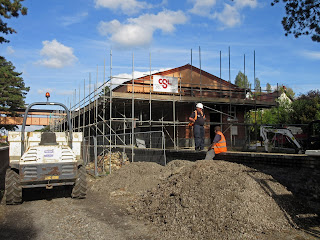 We decided to dump some of the dug up spoilt ballast in the 'car park' below, and quite a bit of it by the former hole in platform 1, which currently has a big void behind it which needs a lot of infill. From here it will be ladled in over the wall, once the Broadway gang is ready for it - they are still sorting out some ducting and drainage arrangements on the other side. 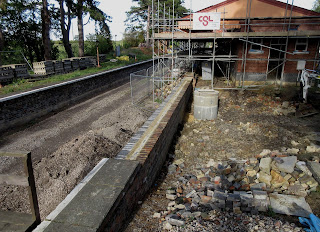 This is the view from above: void on the right, infill piled up today on the left. All the lorries that used to access the trackbed to bring building materials, erect the footbridge etc. used to drive through here. 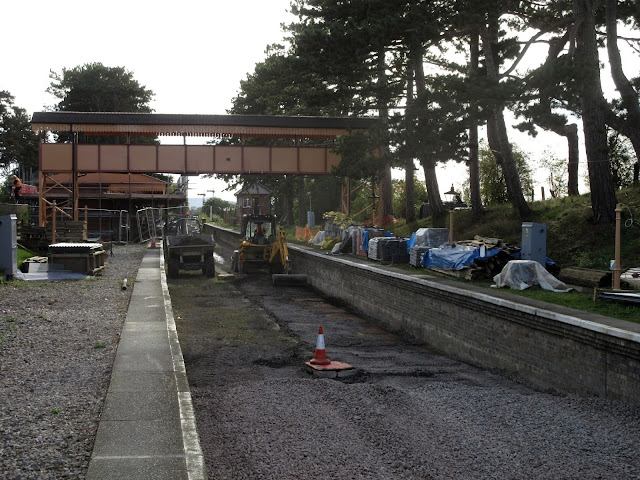 The end of the day picture, after 8 hours on the job. And it only took you 2 minutes to read! The Malvern side of section 3 has been scraped clean, and after this picture was taken a brief start was made on the Cotsolds side. We'll finish that off tomorrow, and that will bring us right up to the scaffolding on the trackwork. We already had to move the permanent steps that were there. From there we're going to jump to the other end, and do the middle bit last, when the scaffolding (on the track) has been built back.

All day long there was a knocking sound from the canopy, which came from one valliant member of the gang hammering down the waterproofing between layers of roofing sheets. Inside, the building is getting drier and drier. S&T were here too all day. 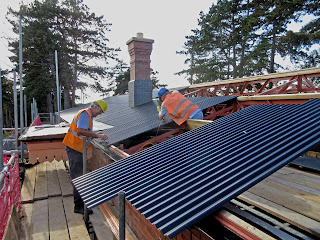 On the other side of the canopy Neal and John spent an afternoon fitting more sheets. It's very satisfying work, seing the building on which you have worked for so long gradually becoming watertight, bit by bit. And another sheet, and another.

Here they have passed the first chimney and are on their way to the second. 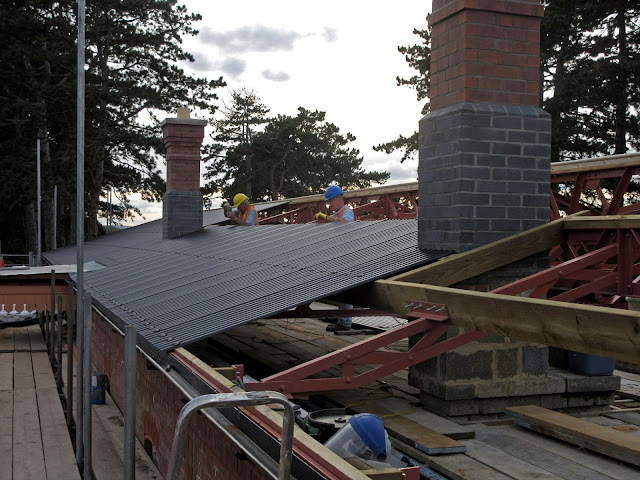 As the light fell, they reached the second chimney on the lower row. Isn't it neat? Way to go, guys!

Next week looks like a busy one trackside too, with several mid week days planned.