Despite the holidays, our team has grown in size and we had plenty of volunteers today. It must have been the doughnuts last week that brought them in, but - haha! - there were none today. 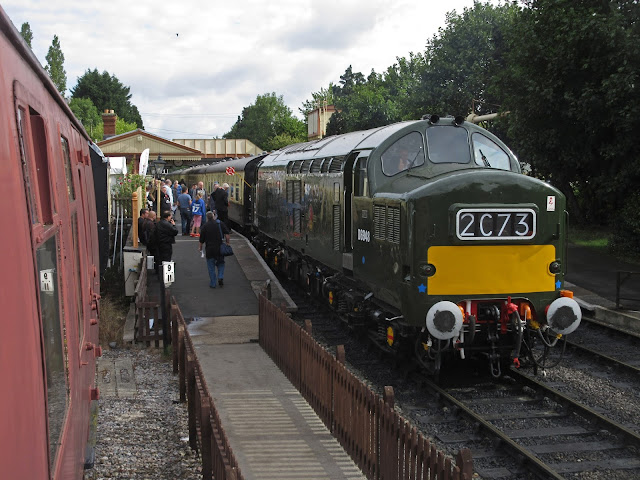 Diesel day today. This was the view from the mess coach window. This green class 37 is certainly a success, and this first train of the day was well filled. The diesel enthusiasts even got a first class coach in the rake - special treatment!
While loading up the Landie, Alan exchanged a few friendly words with a curious stationmaster. Always happy to help with a smile. Then it was time to set off for our destination - Broadway north.

Here we continued to lay in the first turnout on site.

And we have  plan! We have a drawing for the turnout, which is fully reversible (so that you don't need two drawings), but do we want what's on the drawing, or its mirror image?

Nigel explains how it will go in. 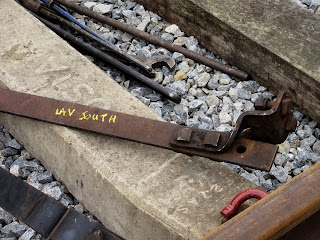 This stretcher bar explains where we got our turnout from - LAV SOUTH.

LAV NORTH will go at the southern end, and so doing will complete the loop at Broadway.

A third turnout, off the loop, will give access to the siding. 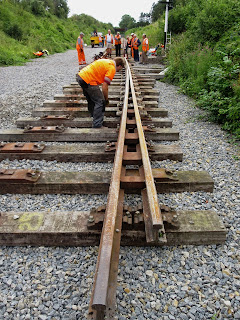 After quite a lot of wriggling and levering, we got the first switch into position.

Having it on top of the sleepers allowed us to position those further. They are of course all numbered, but there's nothing like having the original switch on top to show you where everything is meant to go. 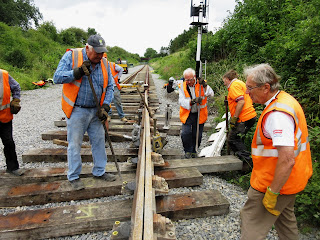 The sleepers were approximately one bed out of position, so all had to be barred up by one, once the switch had been lifted a little higher to allow the sleepers to be pushed around underneath it. 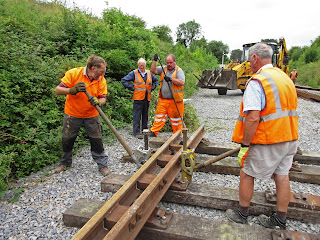 Here the sleepers at the the station end are being sorted out. Steve and Paul are on the jacks, while Nigel gets ready to pounce with the bar. 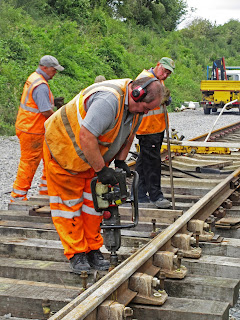 Once all the sleeper positions are satisfactory, we get the nut runner going to tighten up the chair screws. Not all of them though; we need a bit of flexibility so that the whole unit can be nudged later into its proper shape. If everything is done up tight first, it won't nudge (experience has shown...) 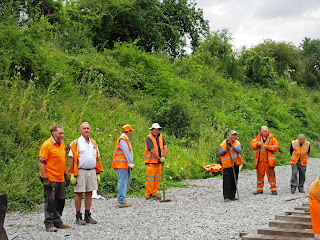 The nut runner is quite noisy, so it's earmuffs on, and everyone else stands well back to watch the show. Just to be sure, we all had earplugs in too. Eh? You what? 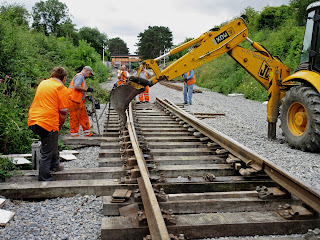 Then it was time to sort out the 'dink' in the turnout. It had a distinct leaning to the right, but we soon sorted that with the help of Steve's bucket. Now it's nice and straight, as it should be.

This end also has to fit. Alan, Paul and Leigh are on bars to make sure that the inch wide adjustment does not result in an overshoot. 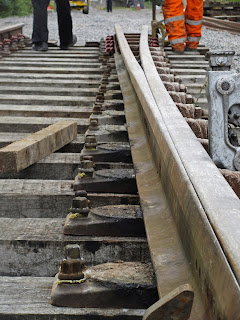 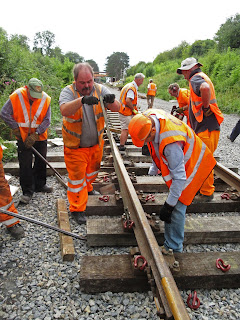 With the dink sorted out, and all the chairscrews fully tightened down, it's time to pull in the clips with the Pan puller.

As we've only got half a turnout here so far, this is achieved quite quickly, but the end result is very satisfying. 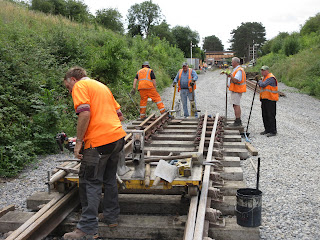 Steve is the lucky one with the first rail vehicle over the tracks laid so far. Just checking.... 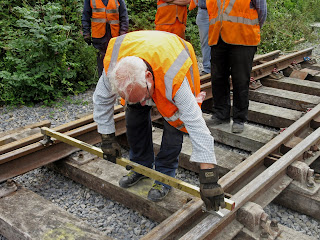 Of course there is a more official way of checking that everything is in shape. And the verdict was: It is. Job done. 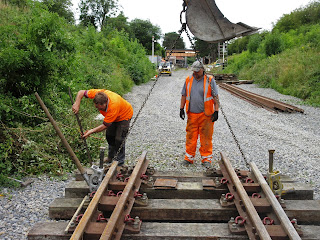 Well, not quite, because having pushed all the sleepers up by one, we were one more short at the station end.

No matter, Steve soon got the next one along and lifted it under the end with the void under it.

We won't go any further for the time being, as that would make the turnout wider, and we don't want to hinder our access to the siding alongside.

There are still plenty more bits to fit to this turnout. 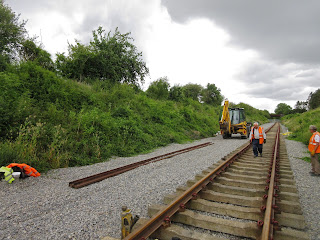 After a brief lunch - raspberry sponge, and a walnut cake were on offer today - we started thinking further ahead. Next would be the siding alongside, so this needs rails putting into position. Here Steve is seen dragging a pair northwards. 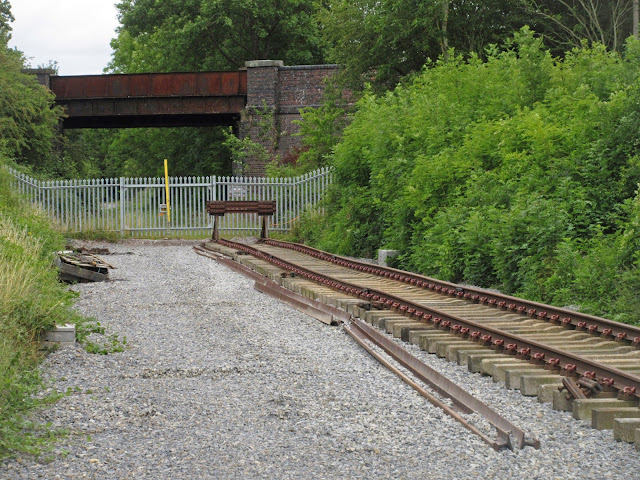 We dragged up 4 pairs of rails, as a start to the siding which will be laid from here. The sleepers will be laid backwards away from the far end, and the rails lifted in one by one as the JCB retreats.

Having completed the job for today - getting the two switches in - we broke up early. One group repaired to Peasebrook Farm to to some more track straightening, while another went to Stanton to examine a potential candidate for the second buffer stop. 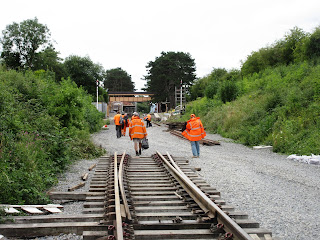 Here you see the gang heading off to do those two jobs. The half completed first turnout is now nice and straight, and buttoned down tight. 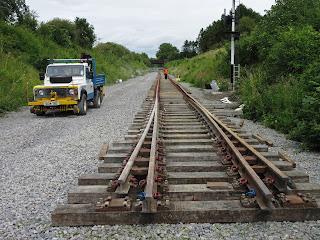 The Landie follows with the tools, and allows us to see the start of the loop turnout, looking the other way towards our northern boundary.

On the way back to our cars, it's rather fun to dialogue with the Broadway gang. A bit of mutual ribbing, and a chat to see how we each got on. 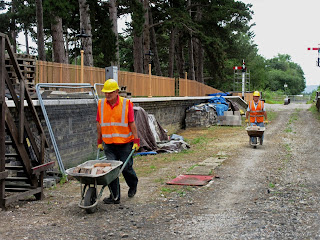 Today BAG was mostly engaged on turning bricks into: 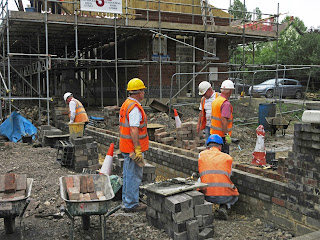 ... wall !  And with the dry weather we had, they were doing really well. This is the final portion of platform 1, and the infill they are doing will link '1A' to '1'. They achieved three courses today, which is very good. All pointed up too. And we are continuing to use reclaimed, original blues, not concrete or preformed elements. This not only looks more authentic, it's cheaper too - all our bricks have been recovered by our own hands, and we only have to pay for the mortar. The bricks they were using today came from the Avonmouth turntable pit. Others came from a sewage works at Wisley, and another big lot from two walls at Taunton station. Many of the reds came from the derelict MR railway stables at Ashchurch.


A bit more on that wagon in the goods shed.

Coincidentally, after posting a picture of the interesting wagon in the goods shed last week, your scribe was invited to offer advice to the Caravan Club about a corner in the shed with some history about Broadway station. During a tour of the shed, we were shown the wagon and were able to discover more of its purpose and history. 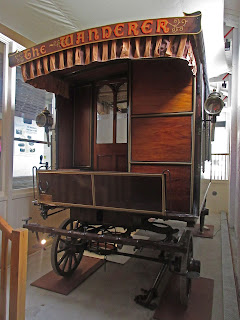 This is it. It's a beautiful horse drawn caravan in varnished wood and simulated brass beading. It is thought to be the first ever leisure caravan, purpose-built, in England. It is fully fitted out inside, with a stove and a bed for one person. The accompanying coachman slept underneath it!

'The Wanderer' was built in 1885 by the Bristol Wagon Works for author and retired Royal Naval Surgeon, Dr. William Gordon Stables. Shortly after receiving it, Dr. Gordon Stables took it on a huge tour from his home in Twyford all the way up to Inverness. Must have been a hard ride, look at those tiny wheels.

In 1907 the Caravan Club was formed, and Dr. Gordon Stables became its first Vice President. Although Dr. Gordon Stables died in 1910, 'The Wanderer' remained in the family until 1961, when it was bequeathed to the Caravan Club. It was eventually fully restored and since 2013 it has been exhibited at Broaday in the newly acquired GWR goods shed.
It's a unique exhibit, and certainly worth seeing. 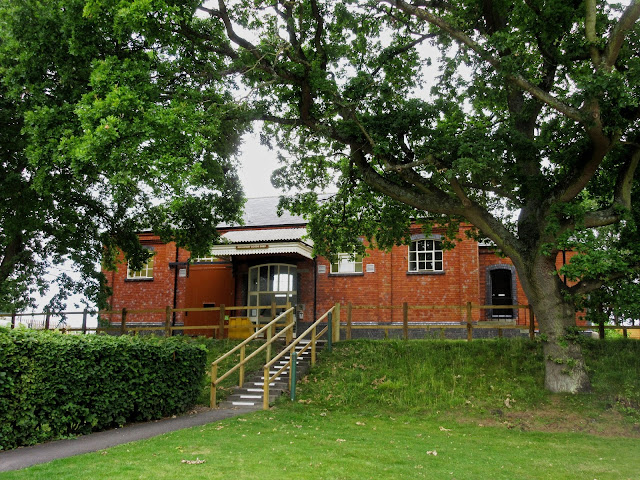 This is the goods shed today. It's very well looked after, we must say.
In the foreground is the slope on which 3 sidings led down to a weighbridge by station road. 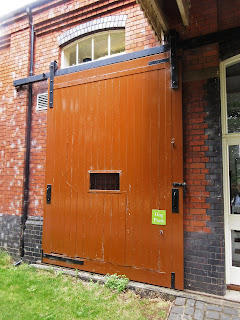 This is the huge sliding door which closed off the access from the road side. Neither the GWSR sheds at Winchcombe or Toddington still have this door, so it's quite a survivor.

We like the grille in the middle. You want what? To come in? We'll have to think about that.... 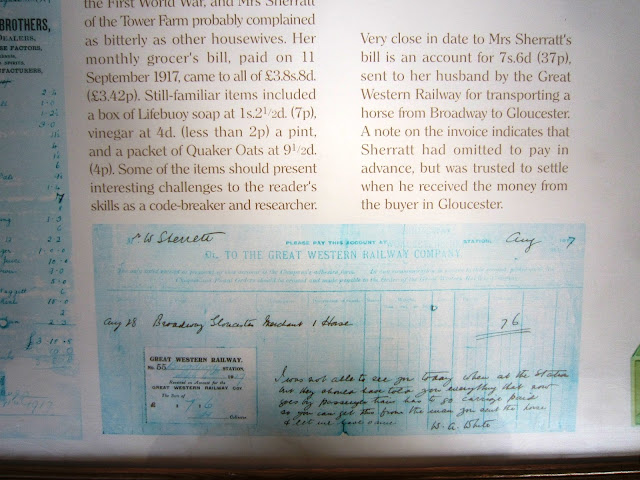 This talk about the goods shed is a good occasion to mention the only piece of paperwork pertaining to Broadway station that we have ever found. It can be seen on display at the Broadway Tower. Unfortunately we were unable to see the original - if anyone can arrange this for us, we would be delighted, but in the meantime you'll have to make do with this photograph of a photograph.

It's a bill for 7/6d from 28th August 1907 - three years after opening - for transporting a horse from Broadway to Gloucester. The goods agent W.A White has thought it useful to add a comment that it is unusual to send the horse to Gloucester for sale there, and promise to pay the railway out of the proceeds! Luckily everything went well, as there is a receipt stuck to it dated September 6th.

If anyone else has any paperwork relating to Broadway, do let us know. A photograph of it would suffice, just something to have for our records. Email: breva2011 (at) hotmail.co.uk