Preparing to extend the track

Three parts to the PWay gang today. We are so multi-tasking, it's hard to follow who's doing what.

Team A was said to be loading sleepers at Winchcombe, but was not seen by yours truly, who was at Childswickham, where teams B and C were busy. 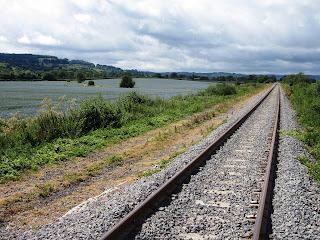 Elsewhere, our newly laid track was in regular service. Here is a long straight near Laverton, now in use, with the blue Flax field in the background. This is all CWR. It was the first new bit of rail we laid, after replacing the Laverton loop, and the extended storage siding north of it. Did we really lay all of that? It's so long... 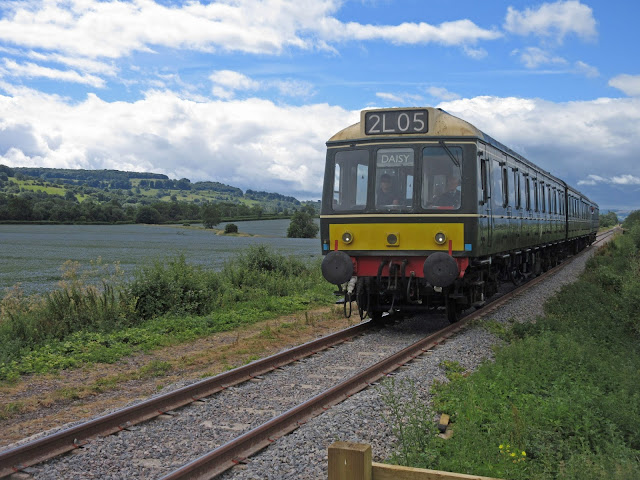 Trains run over this stretch now all of the time, like this DMU set headed for - DAISY? Is that in Derbyshire somewhere? 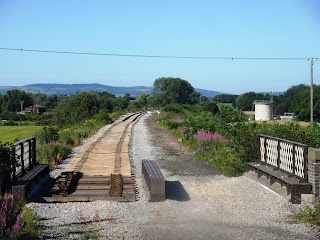 Today's job at Childswickham was to dig out the trackbed starting on the Broadway embankment, sufficient for parking the supply train on it, there being nearly 80 sleepers on site, and plenty of (ex Laverton) rail. 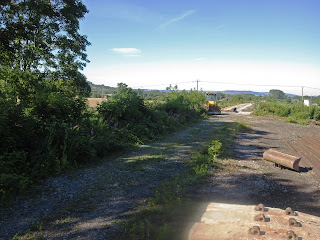 This is where we want to park our train, a future jumping off point for Broadway and all points north.

The fence line between us and the caravan club is buried in brambles and spent ballast, so this has to come out. Steve is at the bridge end with the JCB, just making a start. 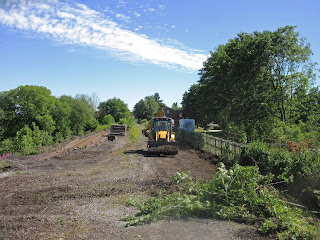 There are actually two fences here - a disused post and wire fence, coming out, and a stock fence, remaining in situ. Brambles all round! Steve has pulled some of the stuff into a heap in the foreground. It's a jumble of wire and rotten posts. 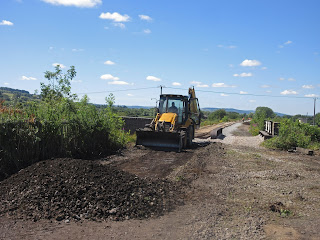 Once the fence line was pretty much cleared over the first 50 yards, Steve started to dig out the top layer of spent ballast, which was taken away. 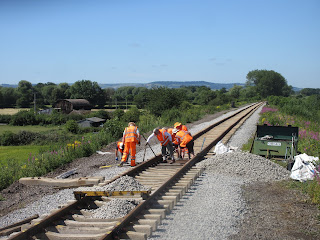 Team B was busy packing the breather by Pry Lane, and here, the future vehicle crossing where the line changes sides. A supply of fresh ballast was dropped off to pack the wooden crossing sleepers, which have a void under them next to the taller concretes. This has to be filled and packed before the supply train is allowed to advance. 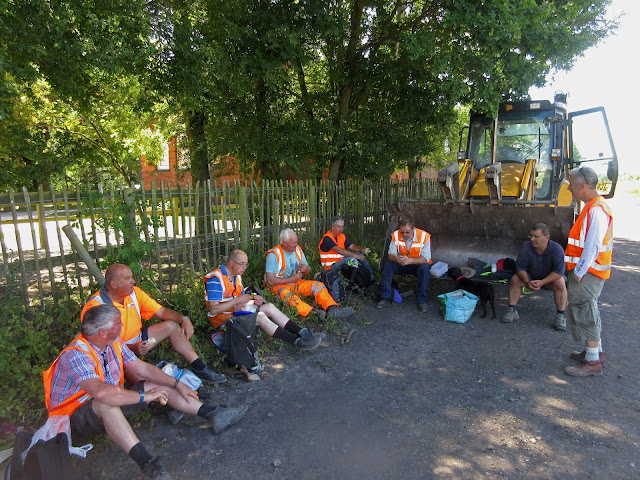 Teams B and C met for lunch. It's not a coincidence that this was under the only tree giving a bit of shadow for miles around. It was hot again today. Steve agreed to stop the front bucket just right so that we could sit on it; some others sat on - brambles! Ouch ! 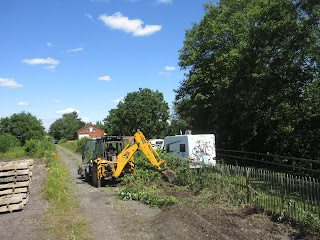 There was a bit of a worry about digging right next to a campervan, but after a while it seemed to us that the people had left for the day, and we dared remove the greenery from the fence near it. The occupants came back later in the day, and we apologised for the dust; they were fine with us. 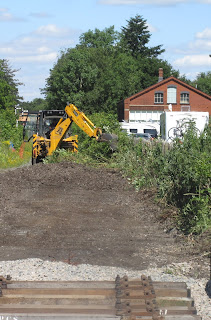 Very gradually the trackbed was extended northwards. This was once track 3 of the 4 along here. Track 1 was the refuge siding on the left, track 2 the up line, track 3 the down line (along which we will build) and track 4 was a siding in front of the goods shed (sold in 2013, behind the fence) 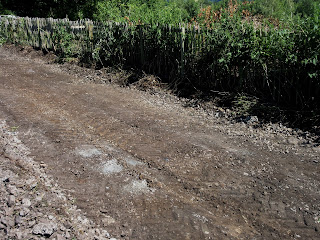 We took off the spent ballast, revealing underneath the original trackbed bottom. It showed a rust line where the rails used to sit, and these grey pools of chippings, where measured shovel packing had been carried out under the sleepers many years ago. Proof that our track ran right here. 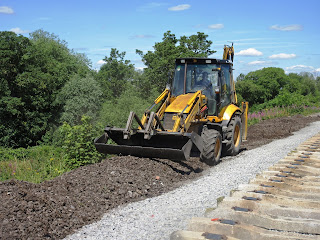 The spent ballast dug out was taken down to the sleeper line a few yards away, to level out some unevenesses in the future vehicle road alongside the new track. 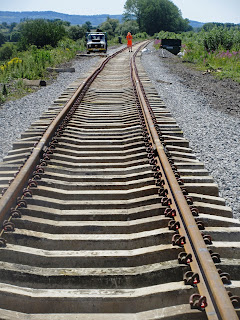 This is the track we laid most recently, in a sweeping curve starting at Pry Lane by the sewage farm.

Where the chap in orange is standing is the future vehicle crossover, as the line changes sides there.

All this is now clipped up, as you can see. Not only that, but the welders came again on Tuesday and welded the joints that weren't already fishplated, so we are now all plated / welded up right up to one panel short of the rail head. 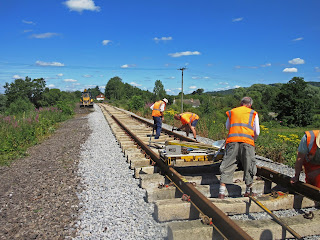 Gang B packed the breather and crossing sections - a very tough job in this heat - and then moved on to clipping up the last two panels on the Cotswolds side that weren't done by team Jim G. (who lost the clipping race to the rail head to the all conquering team Nigel) 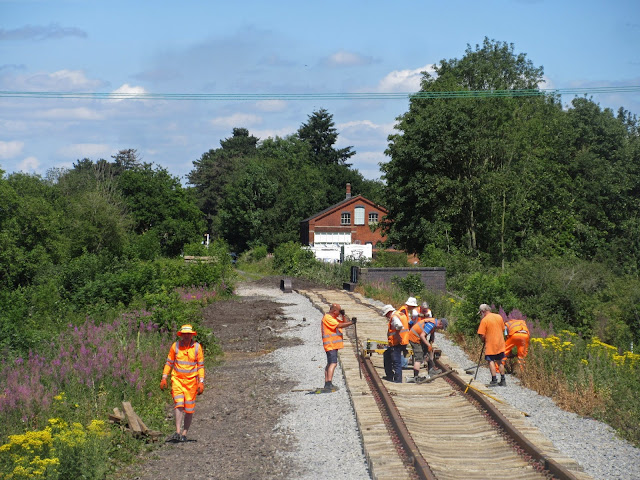 Here they are, clipping up the last few bits before the end of the rails in the approach to the Childswickham Road bridge. This was hot ! 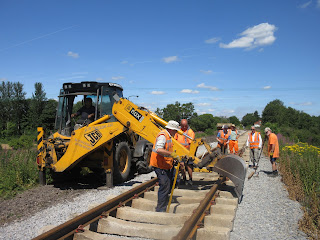 Some of the damned clips wouldn't go in. You'd think that if all the other surrounding clips were in, the last one had to go in too. But no, it wouldn't. Was the rail bent?

Whatever, the answer was a 'Hey, Steve !'  and, bless him, he stopped to give it a nudge. That worked. 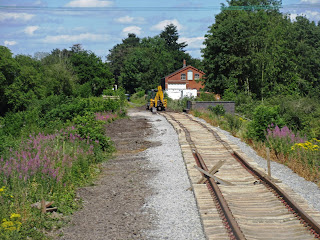 Mid afternoon the clipping gang B had finished and left for home, hot, tired an dirty. A cross of bearers was left to mark the maximum useable track, to which the supply train can now be shunted. This will happen on Saturday, so watch this space for the train now much nearer. Rails will then be dragged off to be laid in the sleepers up to the bridge. 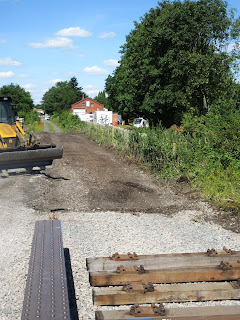 On the Broadway embankment, we were pleased to have achieved today's mission - to dig out a sufficient stretch to lay more sleepers for a short siding over the bridge, so that supplies can be unloaded, ready for the leap to Broadway north.

This newly dug out area will be filled tomorrow with fresh ballast, ready for sleeper laying here. 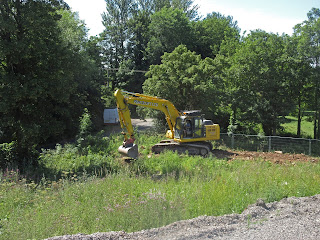 Down below, the contractors returned late afternoon today, and started on further levelling the remaining piles of debris in the 'car park' area. In the picture, the 360 is parked on top of some of the 'Mythe' rubble.

We believe the mission is to level everything in such a way that the area is potentially useable as a temporary car park for a limited number of days per year. As outlined during the recent plc AGM, discussions with Wychavon continue for more definite arrangements.

The contractors will also be laying some drainage ditches to take seepage away from the bottom of the embankment slope.
Posted by Jo at 18:58