A small team did a vital task today - reloading the empty sleeper wagons. 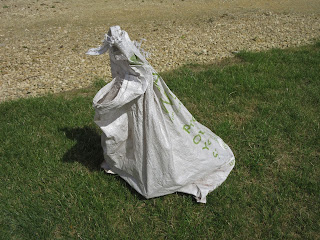 But first, a joyous news item - Santa came early this year! What did he bring us? (see end of the post, we couldn't resist opening the present) 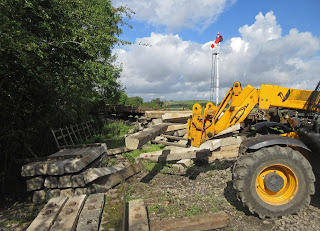 Five of us met at Skew Bridge this morning to assemble a trainload of reject and non-standard sleepers, with which we can lay the up line siding at Broadway north.

An attempt had been made to stack the non standards separately, but over the weeks the piles became rather haphazzard, so needed sorting out again today. 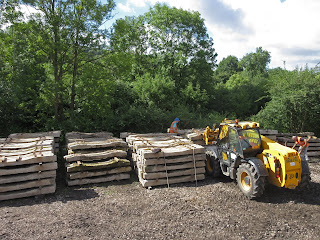 These are the good ones, we still have say 180 of them. But in between were some left over SHC style sleepers, and here you can see Dave P squeezing the Telehandler between the piles to pick out the ones we now want to use. 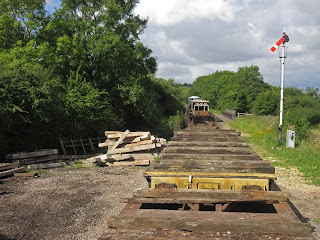 The whole supply train was down at Skew Bridge. It's easier to manoeuvre it that way, rather than splitting it up for the day. The class 73 is almost round the bend, in sight of Gotherington station.

The jumble is a pile of rejects; we still need to sort these out. A job for Wednesday, if we can get a Telehandler driver. Today was strictly a loading excercise. 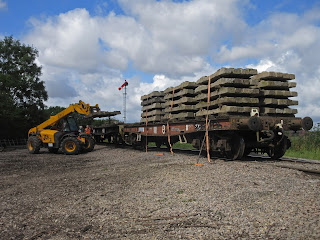 And here we go, 120 sleepers already stacked, and it isn't even lunch time.

Knowing how many we had to go at Winchcombe, we left some of this wagon and all of the second clear for them. Neil then took the train to the PWay sidings at Winchcombe. 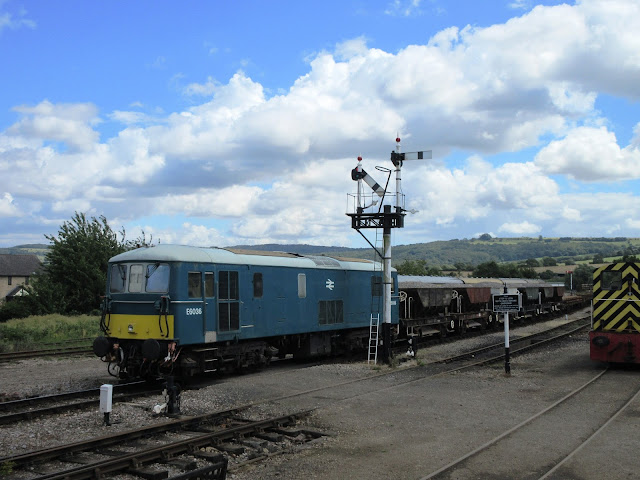 At Winchcombe, the supply train was parked by the bracket signal while stabling arrangements were discussed. The appropriate roads were then set, and here you can see the class 73 begin to pull the train forward into platform 2. 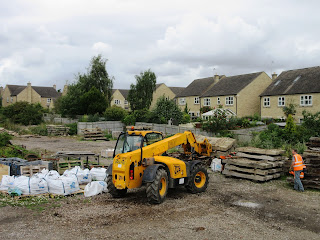 Then it was hunt the sleeper in Winchcombe yard. There were many odds and sods dotted around the yard, and the Telehandler shuttled about assembling forkloads in fours, enough to stack on the bogie flats. 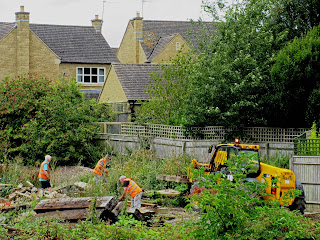 This picture will give you an idea of the 'easter egg hunt' that we did. Can you see the Telehandler? Well, just about. Let's hope the tyres stay intact this time (they did). 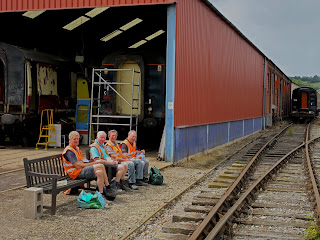 We had noticed on earlier occasions that there was a very nice pair of benches by the C&W shed - what were they for?

We tested them, and found that they were comfortable, and gave a superb view of the activities in the yard. So that's why!

After lunch we went back to work, passing by this cubic metre of rubber pads for sleepers. We are assured that all will be used on the extension. Wow! 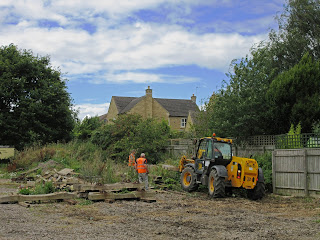 The Telehandler delved ever deeper into the jungle, but did extract, slowly, a whole wagon load of additional sleepers, which will suit us nicely for our siding at Broadway. 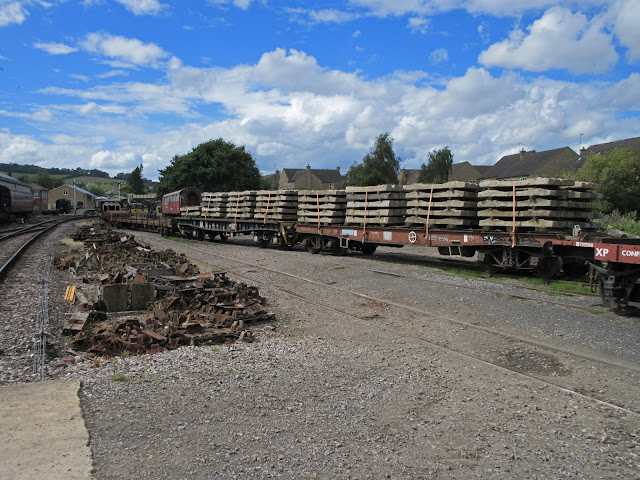 Here's the train, now (almost) fully loaded. We put on 290 (+/-) sleepers, not quite full but enough for the job in hand.
Neil then reconfigured the supply train by extracting the empty rail wagon and parking it in the PWay sidings. The other wagon with a handful of new rails remaining is still part of the train.
The shorter supply train was then taken up the extension. Hearing this, Bob and Dave P cadged a cab ride to see what the Saturday gang had achieved - it was new to them. 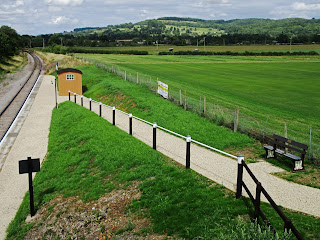 Waiting for the supply train to pass Hayles Abbey Halt, it struck us how green the halt now looked.

We are still strimming and (selective) weed killing here, to eliminate brambles from the newly sown grass. 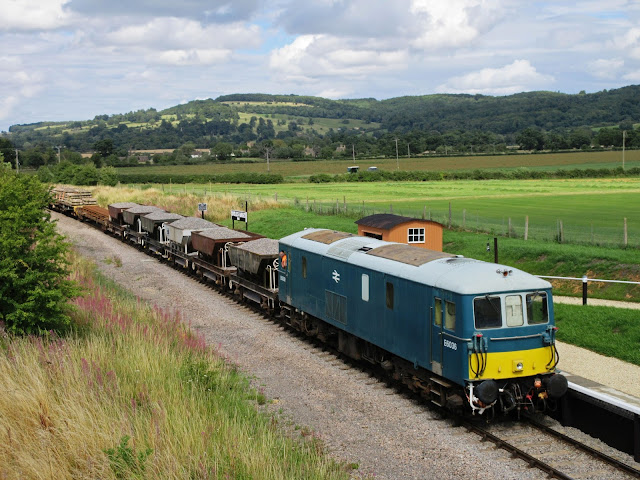 Not long after, the class 73 trundled by with 6 filled Dogfish and the 290 sleepers loaded today. 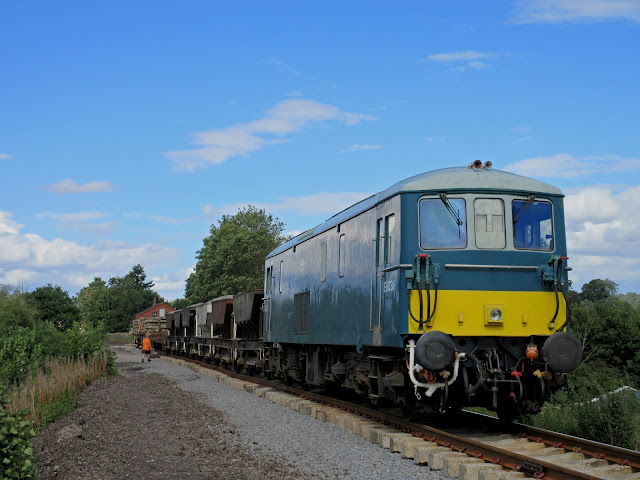 It crept up the extension-in-progress at a snail's pace and finally arrived at the railhead at Childswickham. The sleeper wagons were so parked as to enable unloading from the side next Saturday. This photograph is quite rare, you don't see many trains up here (yet). This is probably the first time a train has ever been up here, so savour the moment. 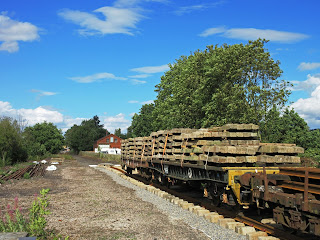 Here are the newly delivered sleeper wagons, right at the end of the rails.

Broadway goods shed is just behind, and a glimpse of the station footbridge can be made out in the distance. 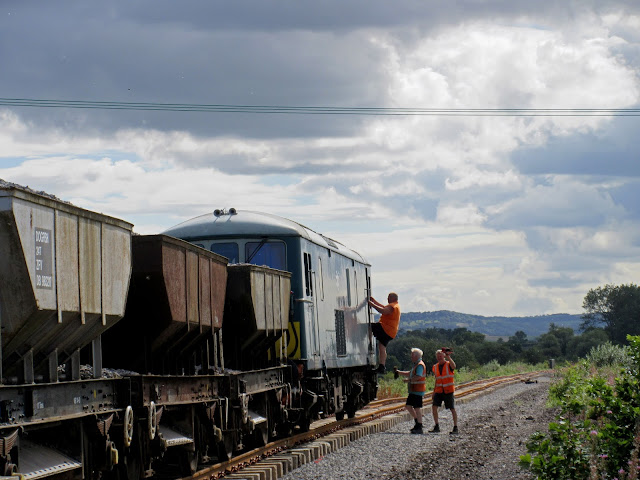 Then it's back on board, to take the Dogfish back to the limit of operation.We will shortly be ballasting the next stretch of 1000m of CWR for tamping and stressing.

Dave gives a friendly wave to your scribe - he has to stay behind and drive home in the car. No cab ride then. Byeeeee....

Ah yes, and Santa's present for us? What's in the sack then? 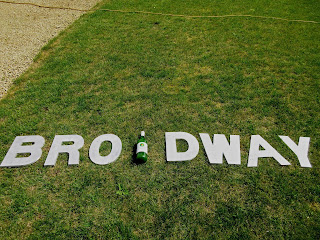 A set of 12 inch cast aluminium letters for the BROADWAY running in boards. One of the 'A's didn't come out well enough in the casting process, and we have replaced it with a bottle of delicious Hayles Fruit Farm apple juice, which is very fitting as the Hayles gang had many a happy stay there. The other 'A' will be delivered with the second set.
These replica letters are based on actual letters that were lent to us by the Cheltenham Area Group, by some friendly volunteers at the SVR, and a handful were bought at auction. It wasn't easy collecting a full set, but we got here in the end. Thank you all for helping us with the loan of your letters, you will get the originals back very shortly now.