A double activity today - 4 people sorting out Winchcombe yard with the Telehandler, and another 8 up at Childswickham clipping up - 'The Clippies'. (Pass right down inside please, plenty of room upstairs, no smoking on the lower deck)


First things first, cake ! You're a bit slow with that picture there, because there were two, and the chocolate one has almost gone already.

It was a PWay gang member's 65th birthday today. One of the younger ones then.... 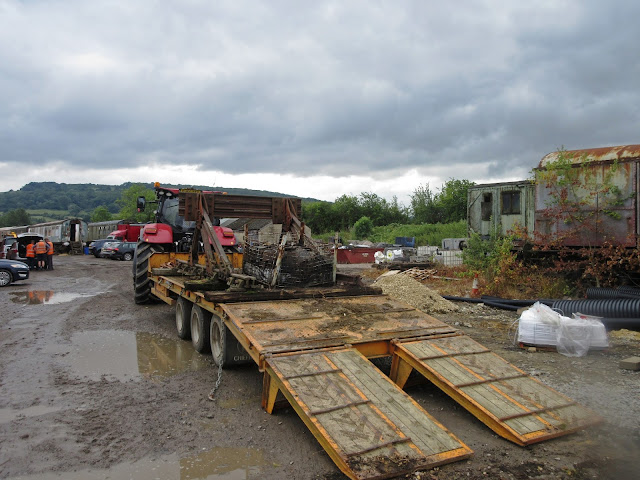 This one's a bit hard to see, but it was taken out of the window of a passing Landie.

Stevie had borrowed a larger tractor and trailer unit from a friendly farmer, and loaded on to it the first of two buffer stops, destined for Broadway north. Then a pallet of pads was forklifted on to it as well, to help with the disguise. The buffer stop should now be at Broadway - more news on Saturday. It needs resleepering. 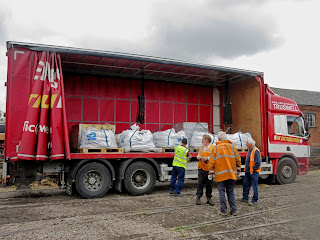 On Saturday we reported on the need for more clipping up materials, and we don't hang around because here they are, being delivered this morning.

More pads and Pandrol clips, amongst other things. A supply was immediately loaded on to the Landie, to give the Childswickham lads something to work with. More was to follow with the red Transit. 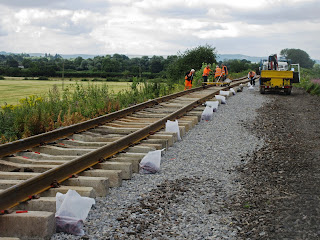 On arrival at Childswickham with the Landie, the bags of clips were dropped off at 6 sleeper intervals, while one of two clipping gangs was already making a start on the remaining panels up to the bridge. These were only partly clipped up on Saturday due to lack of time, and finally lack of clips and pads as well. No more. 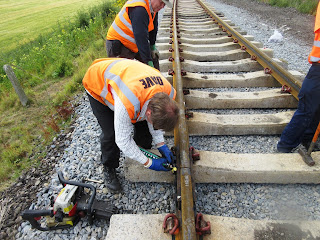 Next to clipping up, we had to solve the gapping between the rails. The damned heat keeps moving them along, certainly so when they are not held into place by a full set of Pandrols.
Here Dave is marking an issue with a fishbolt with yellow paint. It needs to be changed. 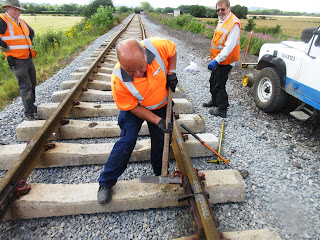 Once a fishplate has been loosened with the nut runner in the picture above, a wedge is driven in from the side (so as not to disturb the running surface of the rail).

Fingers crossed that it's the right rail that moves a long a few mill. But it should do, as one rail is fully clipped up, and the other only has 4 Pandrols, just to hold the rail in place. 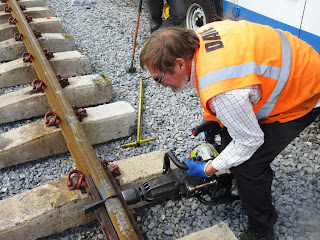 Once the gap is correct, the fishplate is bolted up tight again. 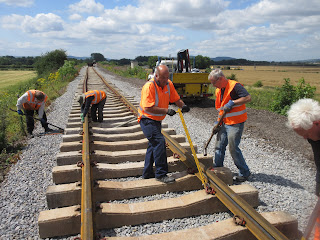 Then the other rail is fully clipped up. Shouldn't move now....

Again we have a Malvern side gang, and a Cotswolds side one, and it's the Malvern gang that is ahead. Martin pulls in the Pandrols, and new recruit Paul on the right gives them a final whack with the keying hammer. 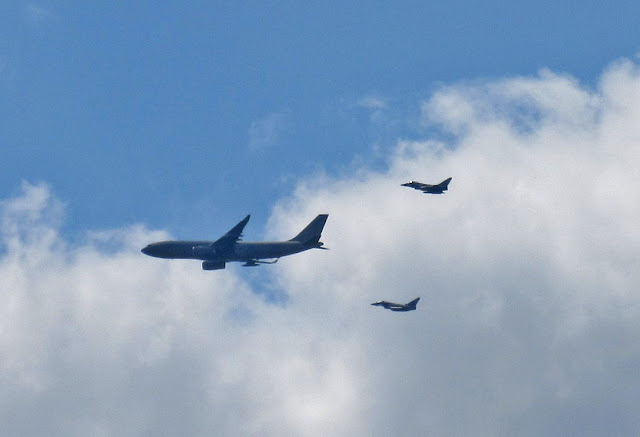 Then this flew by. What is it? A big, grey, twin engined passenger jet, with a fighter escort. Now that is unusual round here. (No, it's not a 'Bear' probing our airspace, and two Lightnings) 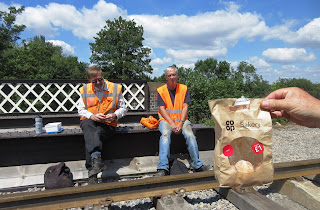 It's rather good to be up on the Childswickham bridge now. You get a satisfying sense of achievement, somewhere comfy to sit (if you don't mind a rivet head poking you up the derriere) and a packet of doughnuts waved at you. Fancy one? Take two, it's OK.

OK then, just the one.... already had cake in the mess van, you know. 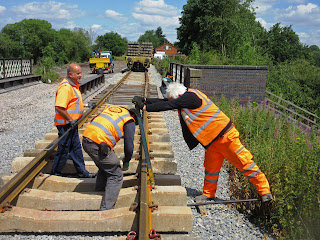 We've done 3 or 4 panels now (104 clips on each length to do) and coming up to the bridge. Nearly there now.
It's not just a case of pulling the clips in you know. About half the sleepers have the rail floating above them for an inch or two. We have a sleeper 'Lifter' (being pushed by Peter here) but it will only do small lifts. Many are big ones though, so you have to start the lift off with a crowbar and a piece of wood for a fulcrum. You need to keep the crowbar in place while you do the final positioning with the lifter. We're a man short here really, so Peter has solved the problem by using both his hands and his feet. Now, quickly, the orange 'Biscuit' and then the Pandrol to keep it all in place. 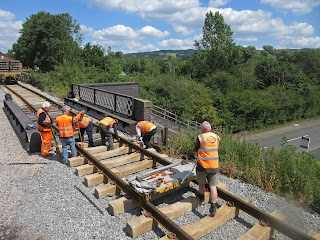 Here are both clippie gangs, just working on to the bridge. The road from Broadway to Childswickham is below. Just a short stretch to do now, then we have caught up with the sleeper wagons. 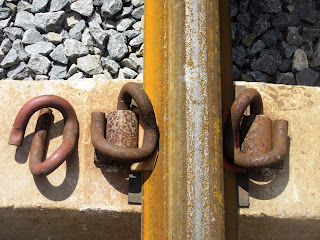 This week's test question (for the experienced, the uninitiated look away now):

Q: What is wrong with these two Pandrols, firmly clipped up?

It's the Saturday gang, trying to catch us out.

A: They both face the same way, one is a reverse Pandrol. (used where access is impossible, for example by a fishplate.) A replacement is on the left. 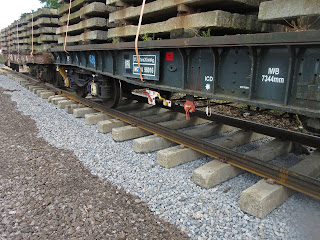 We didn't manage to clip up the last two panels, as they had a train standing on them. We're supposed to put pads under the rails too, anyone got a jack? It was decided to unload the wagons first, then do them when they had been taken away again. The sleepers on board here are non standard (compared to the ones we have been using) so will be used in the headshunt and siding at Broadway north. 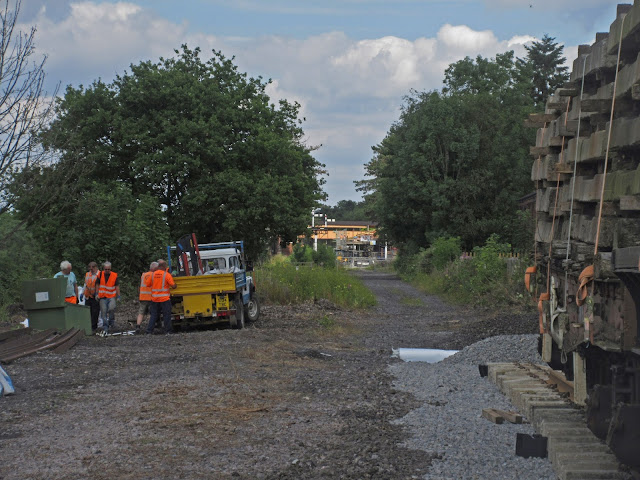 At the end of the day we collected the tools with the Landie and took them back to the site safe, which is now in the new unloading area. The wagons await being unloaded, and ahead lies Broadway in the sunshine. Orange figures could be seen moving around the canopy; we even had Mike, one of the Broadway gang members, come round to say hello. Very friendly. 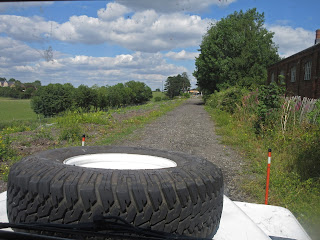 Then it's back to Toddington in the Landie, now along the top of the embankment and down by the bridge. We are using this new access point, again a symptom of our rapid advancement. 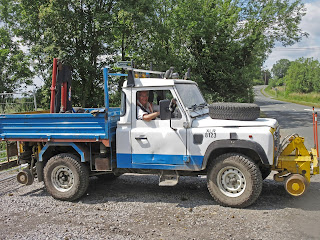 It's tricky pulling out on to the main road, when you've got 2ft of road-railing equipment out in front of you.

This trusty girl has served us well. Although she is very reliable, there is an emergency telephone number on the dash for a fitter, left by the previous owner. We haven't tried that yet! 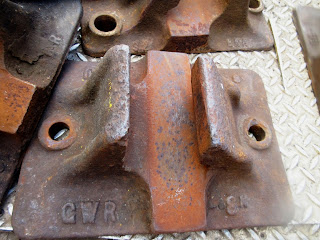 Back at Toddy, we unloaded some chairs for the 2807 bootscraper gang. (not this one though, as it's extra large).

If you want a beautifully painted bootscraper, you can buy them at Toddington, and help fund 2807. If you ask extra nicely, you might even get a GWR one, like this one. (from 1928, now that you ask). 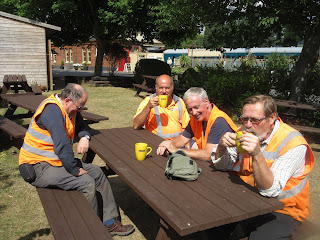 We closed the day with a good cup of tea - best part of the day, that is. Refreshment for the weary, there's nothing like it really. 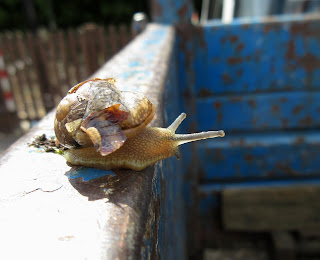 Oh, and have you met the Wednesday gang's mascot? It's Speedy the snail, and he lives on the Landie. His little house needs urgent repairs though, he had a brush with a keying hammer today.