Two teams today - one at Peasebrook on the extension, the other at Gotherington in the sleeper depot. 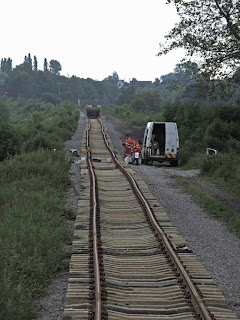 We met in the mess coach, which appears to have received the visit of some uninvited individuals, as we found one of the doors open on arrival and a fire extinguisher partially discharged. Fortunately, no real harm seems to have been done.

We then split up to repair to the two locations.

The Peasebrook team looked after the welders again, who came to weld up the rail recently laid, which continues to motor away from the stretch that has now been released for general use. While the track layers are nearing Pry Lane, the welders today started from bridge 4 at Peasebrook Farm, just visible by the white handrail on the right of the picture. The number of welds achieved by the two teams on site (only one in the picture) was 12 at the end of the day. 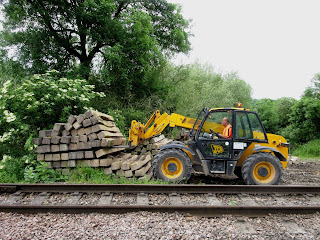 Meanwhile, team 2 at Gotherington, a 'gang of four', attacked the shrinking pile of jumbled sleepers with vigour. The current daily record for sleepers stacked is held by the Saturday gang at 200.

Here Martin carefully inserts the forks into a gap near the middle of the pile - how many sleepers would he catch? 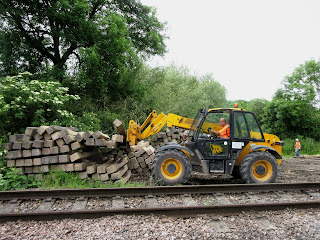 It is a bit like fishing. Here he has caught six - a respectable number - but the sixth one is a wobbler and looks like falling off. These then invariably rotate so that on the next visit you find them lying end on, a tricky job for the Telehandler with its fixed boom. 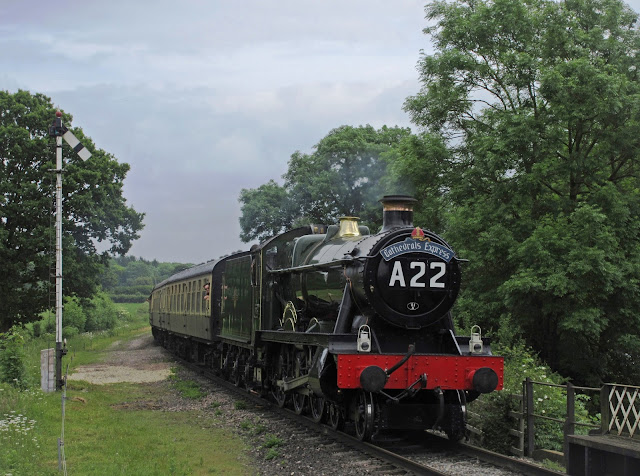 Foremarke Hall trundled past into Gotherington today, with a nice 'Cathedrals Express' headboard. 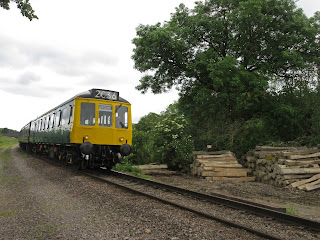 An hour later it was the turn of the DMU, and now the left hand pile looks astonishingly small. Remember the photo with which you were asked to guess the number of sleepers left? That pile has almost gone here. The next one also looks quite small now.... 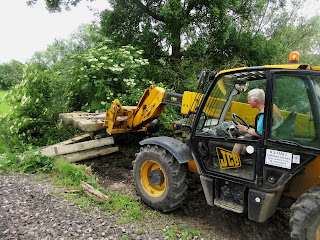 When it was Bob's turn in the Telehandler, he had the pleasure of extracting the very last sleepers from the left hand pile, which has now officially gone! 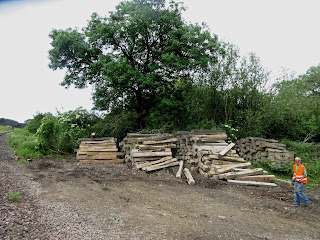 This is what it now looks like, without the pile alongside the running line. Four piles left, where there used to be five. And there isn't much left in the second pile either.

We did 100 sleepers before lunch. 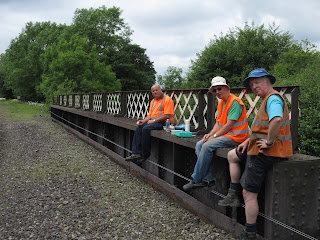 Lunch was taken sitting on the bridge, from where we had an A1 view of all the trains passing by. Foremarke Hall accelerated out of Gotherington with some gusto, which was very enjoyable to hear. 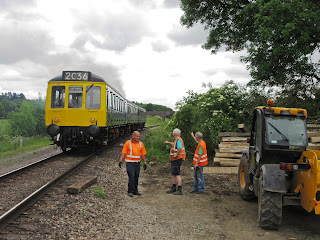 Another DMU run, as the team considers whether we should have a go at clearing the second pile as well. Some of the sleepers there have rolled off into awkward positions. 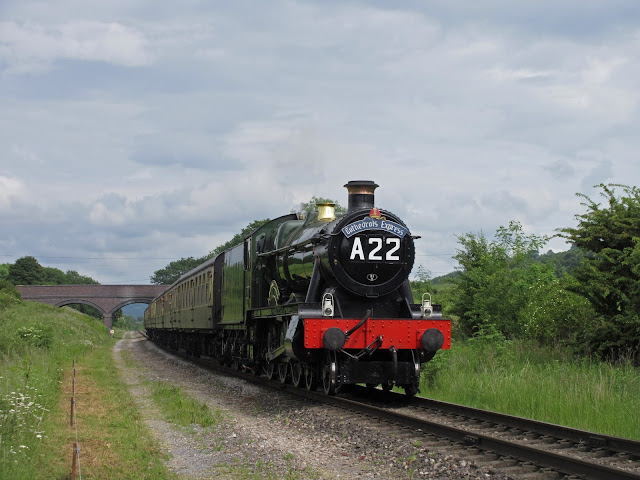 With yours truly as lookout, it was possible to take some fine photographs of our Hall, here slowing down through Three Arches bridge as the train pulls into Gotherington. 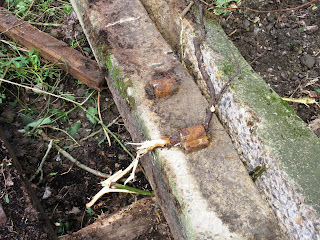 As we dug into the very rear of the piles into what some called the jungle, we found this sleeper with a defect (or is it?) that we hadn't seen before - a tree root had grown right through the Pandrol hole! Unfortunately we didn't have any tools with us to try and extract this. 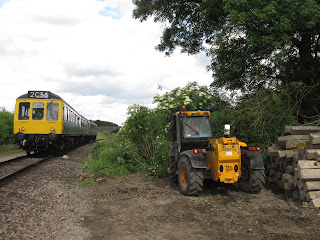 With still half an afternoon left, we ploughed into the remains of the second pile as well.

Bob here is fishing around in the jungle for those sleepers that have rolled off the top and right into the back.

The DMU pays us another visit, but we are now one row removed and feeling more comfortable with the extra distance between us. 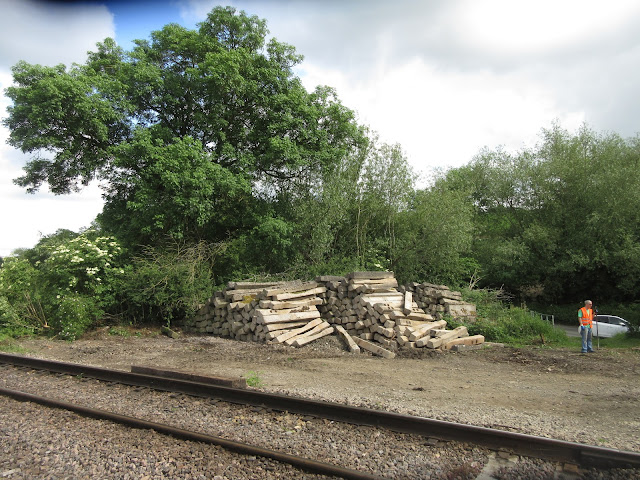 At the end of the day, and with a little gentle persuasion to Bob, we cleared the second pile as well. We left a little later than usual (Andy P whizzed by with a beep-beep in the red Transit on his way home, and so did one of the Peasebrook crew, also on his way home) but with a big feeling of satisfaction - 194 sleepers stacked ready for loading, two sleeper piles completely cleared, and a total of 414 sleepers in stacks of 20 on site. Now where's that extension train?

A question arose the other day: What was the line speed of the Honeybourne line in BR days?
We asked a former steam driver for you, and this was his reply:


I’m not exactly sure about the line speed. But I’d say it was around 80mph. (The Birmingham - Swansea Dmus were limited to 70). At the South end of Greet Tunnel there was a speed limit of 50mph around the curve. The Cornishman with a Castle would certainly be doing 75 to 80mph most of the way between Honeybourne East and Cheltenham.

So it was a pretty fast line, but that is to be expected, as it was a very late build, and has an easy profile and large radius curves. It would be interesting to know what speed the iron ore trains were doing. We have a photograph of a 9F with such a train, and it looks quite fast. Former residents at Broadway told us of vibrations that affeted the laths in the ceiling, and a gas mantle that fell out as these heavy trains thundered past.


Soil nailing progress
The soil nailers at Broadway had gone home at the end of the day today, but from the pictures you can make out that they have covered approximately two thirds of the area they are going to do. 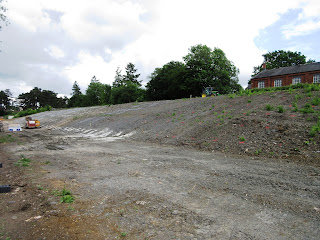 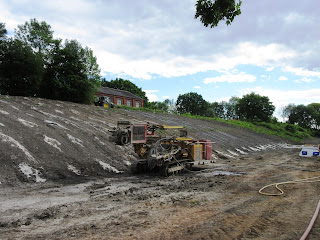 Progress looks good,  and the weather has certainly helped.

They are currently working by the goods shed, and the first third or so has also been completed with the caps and the wire netting.
Posted by Jo at 20:49