The Broadway canopy goes on

Bet that surprised you, you didn't know that was coming...

Well neither did most people, it was a snap decision when the loco team learned that they could not use the Toddington car park to make the trial assembly due to a field out of commission for the gala. So it was decided last minute to take the whole lot to Broadway and see if we can assemble it on site. And they did! It looks brilliant. It took all afternoon, but all 6 trusses are up, as well as the 5 ridge purlins, the ones with the beautiful arches.

Tomorrow the steelwork will be further bolted together, and next week the crane will return to lift in the purlins and fascia boards, another day's work.

Because of the scaffolding, it's a bit hard for the man in the street to see what has happened, so here are some photographs of the work that went on this afternoon. It's an exclusive, hot off the press. 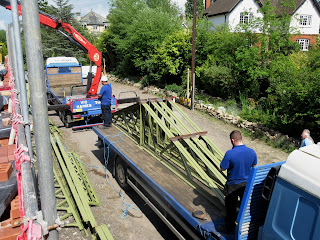 Vic Haines came to Toddington this morning and loaded two lorries with all the bits you saw on the Hayles blog yesterday.

Here they are outside the station, with the purlins unloaded, up against the building, and the trusses being lifted one by one on to the steel framework inside the bricks.

It was a race to see who would be ready first - the bricklayers, or the team manufacturing the canopy. In fact the loco dept won by a short head. A few more rows of corbelling remain to be done. 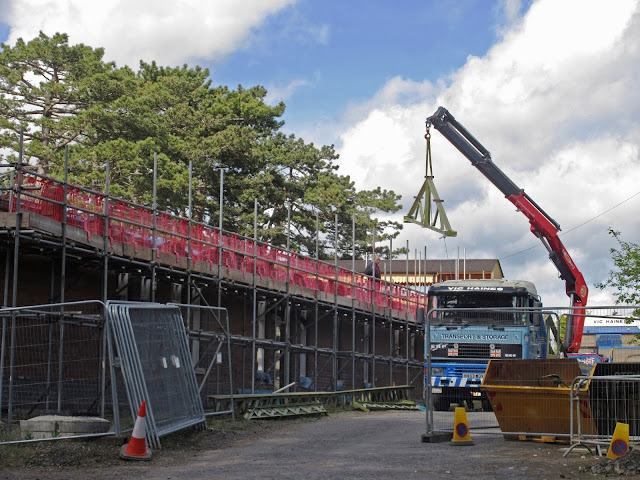 The issues of transport, and assembling the canopy on site were solved by a single vehicle - the crane lorry from Vic Haines at Pershore. They did an excellent job for us today. 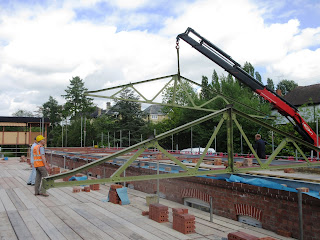 The 6 trusses were lifted on, starting in the middle with trusses B and C.

You can now see how far the canopy projects out over the platform in the foreground, and the scaffolding recently lifted takes account of this. 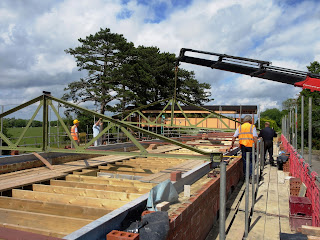 The second truss is lifted into place here.

The weather was so sunny that we became hot and thirsty, and our visiting Finance Director unexpectedly opened his dusty purse to offer us all a drink of lemonade. It was very welcome. 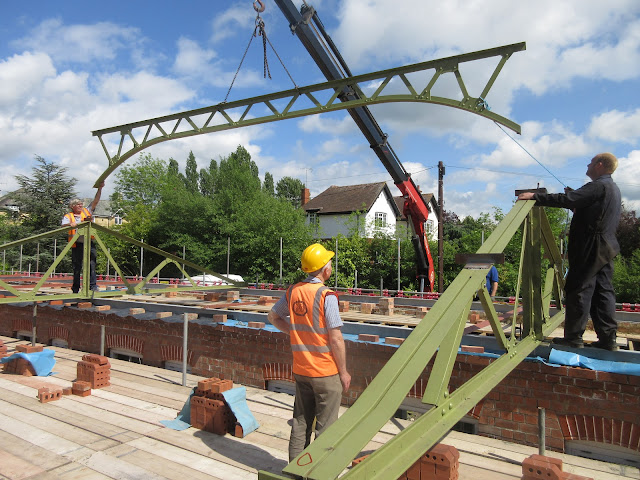 Once the first two trusses were approximately in position, the first ridge purlin was offered up. This connects the two, and confirms their positions. 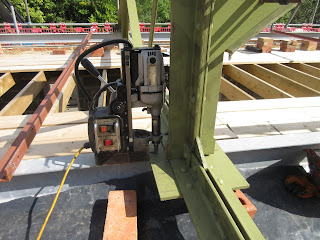 While we were craning more trusses into position, a member of the crew - there were only 4 of us on site - already started drilling the holes to bolt down the first trusses we had put down. 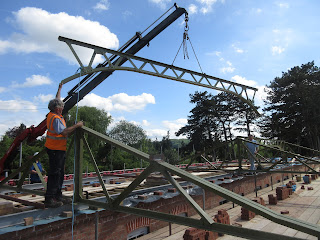 With the third truss in place, the second ridge purlin could be lifted into place. the canopy was starting to look like something. It was a heart lifting moment, to see this actually being assembled, after so much heartache and discussion. It will look magnificent. 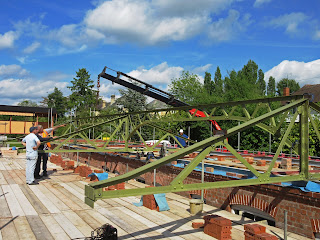 A conflab ensues on what is in its place, what isn't and what is/is not vertical.

It all went extremely smoothly. Only a single piece of angle had to have 1/8th inch shaved off the end to make it fit. It's an amazing testimony to the savoir faire of the small team in the loco dept. Congratulations, guys ! 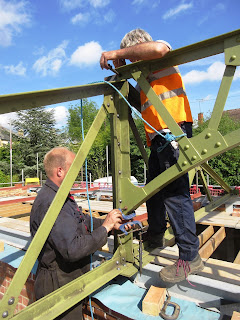 The different elements were initially G clamped together, until everything was properly wriggled into its place and the positions confirmed. 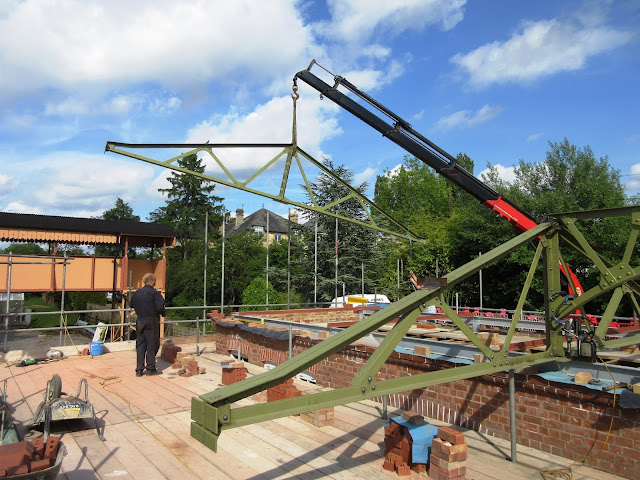 Soon we reached the northen end of the canopy, as truss 'A' is lifted into its place on the end. Beyond this is the canopy overhang, which conncts with the bottom of the footbridge steps. 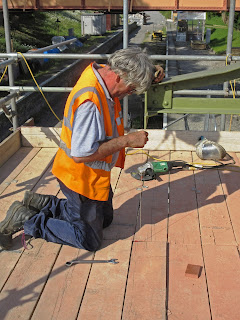 Besides verifying the positions of the trusses in terms of the 'I' beam running around the top of the building, Neal also checked to see what the platform side overhang was doing in relation to the edge of the slabs below. We see him here dropping a line down to make sure it was all OK. 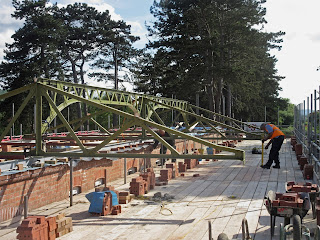 Now looking back south, with the truss 'A' behind the camera, we can see the ridge purlins in place on trusses B and C, and once again Neal checking with a level that everything is in its place. 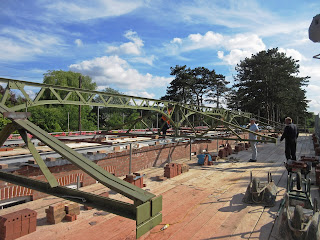 A few moments later, the ridge purlin between trusses A and B was also located. You can now begin to see the lovely row of arches on this traditional rivetted canopy; that's what it was all about. There is going to be  a row of glazing with traditional coloured glass all the way along here. Looking north again in a brilliant spring evening sun, you can see the arches striding along the ridge of the canopy. 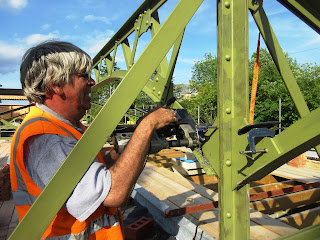 Here we can see Neal with the mag drill following on with the gusset plates, which hold the ridge purlins on to the trusses. There'll be a lot more of this taking place tomorrow. 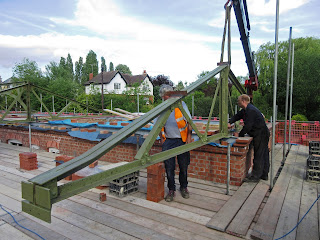 As the sun started to go down, the final truss 'F' was lifted into place at the southern end of the new canopy. You can see a lovely bit of corbelling brickwork on the corner. 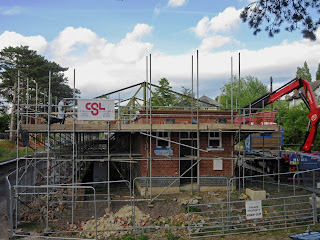 Because of all the scaffolding in place around the top of the building, it's a bit difficult to give a good view from the ground of what is going on up above. Here is a shot from the site of the old viewing platform, which has just been taken down. You can make out the southern end truss, sort of. 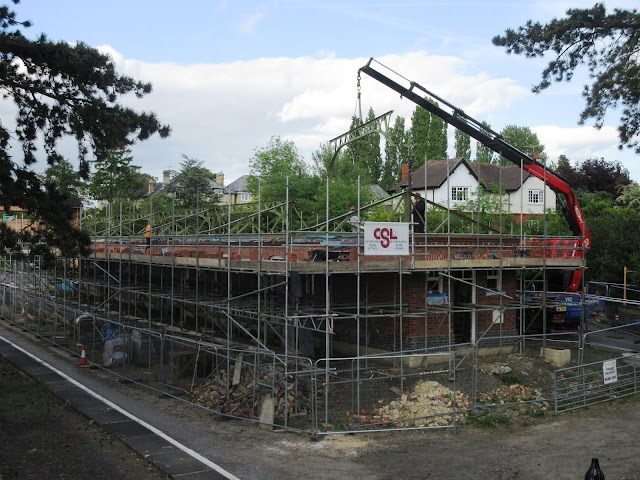 This shot is from the signal box steps. Still not great photography, but you can see the last ridge purlin being lifted into place at the southern end. The whole of the canopy assembly is visible here. Still to come, as mentioned earlier, are the purlins and fascia boards, which hold the ends together. 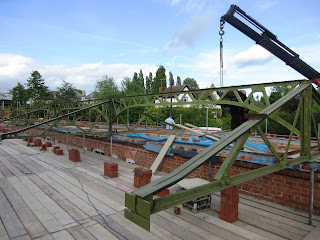 Back on top, we can see a close up of the last ridge purlin, which has just been lifted in.

There's a whole row of steelwork up here now, and more to come next week. 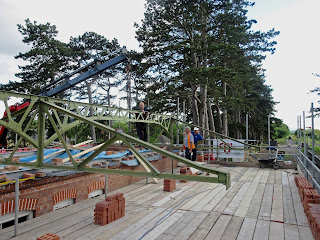 A last look at the final ridge purlin going in.

Those arches are just amazing, and it's almost all been made in house, by our very own people.

The fascia boards will go on to the ends visible in the foreground here.


You can see all this during our open evening on Friday, and we'd love to see you and show you what we can. Do come.

Good, steady progress continues to be made here. The machine is steadily working its way along the embankment, and as of this morning, was a bit over half way along. There are no major issues as far as we know, which is a relief. 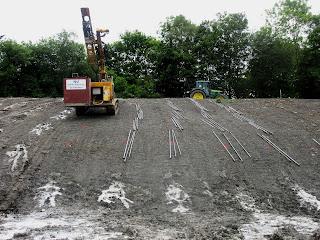 Here we see the machine with completed nails sunk on the left, and new nails laid out on the right. The sites of the nails to be sunk are marked out in red. The bottom row has already been done. 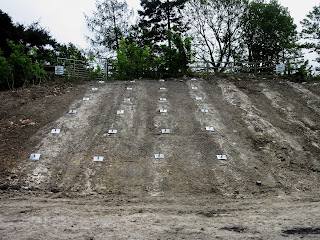 In this area at the beginning of the site the nails have had their caps put on, and the fence like matting has been laid out over it. This is what it should look like at the end. 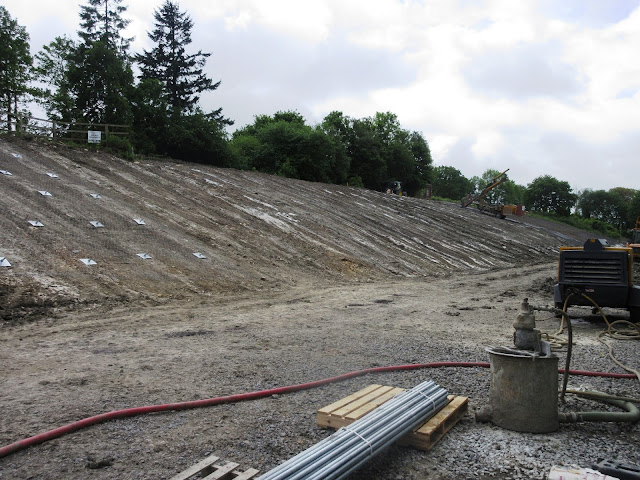 This panoramic shot gives you the impression that the machine has almost finished, but that's a trick of the (camera) eye. Where it's standing is a bit over half way, but still good progress.
A bundle of 'nails' (actually hollow tubes) can be seen in the foreground; also the pump for pumping up the cement slurry is visible, together with its compressor.

The road along the bottom has dried out again, thank goodness.
Posted by Jo at 21:41