If you want to know how the day went, then that would be the reply.

Today was the massive clipping up day, with an all round appeal to volunteers to chip in a day and help to get it all done. One kilometre of track, 1500 sleepers to get into the right position, 6000 plastic pads to insert between rail and hoop, and 6000 steel clips to hammer in.

We managed to assemble a pleasing 35 volunteers, of which 33 actually came on the day. Two were 'rain wimps' because - it rained. Massively, all day long.

What a washout it was.

Take a look at the smokebox of 35006. See the streaks? That's the rain, and it was relentless. Not a moment's respite. 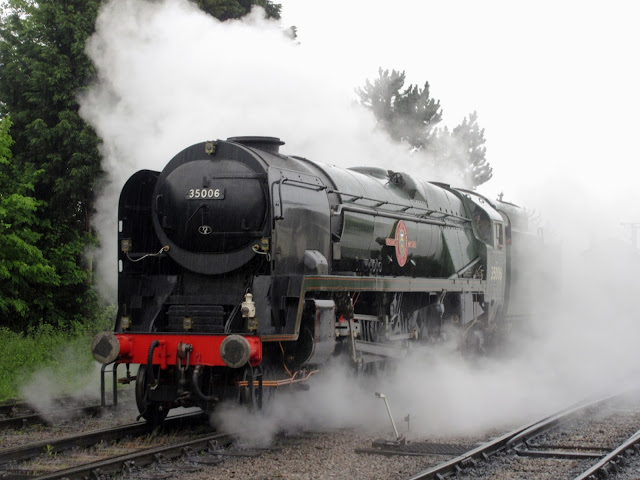 We gathered in the Toddington car park, a sea of orange amongst the grey. Of course the Saturday and Wednesday PWay gangs were both present, but we also had volunteers from other departments, and even a most welcome contingent of volunteers from Network Rail.

At first the numbers seemed low, and then phone calls trickled in reporting of terrible road conditions. Next to the rain, an oil spillage was reported on the M5, affecting all those hailing from a westerly direction. First a bomb, now this. Rather than wait for the last volunteer, we peeled off bit by bit in teams of four, car pooling up to Little Buckland bridge.

Parking up at Little Buckland, the first thing we had to do was walk half a kilometre to the mess coach and tool van. Here each team was given two keying hammers, a bar, and an equaliser. Armed with this equipment, we then had to walk back down the line to find one of 8 five panel stretches that each team had been allocated. Those that came first picked stretch No. 1, right by the mess coach.... Those who gave the late arrivals a lift were left with stretches 7 and 8, a kilometre the other way. So that was 1500m walk in the rain, and we hadn't even started yet! 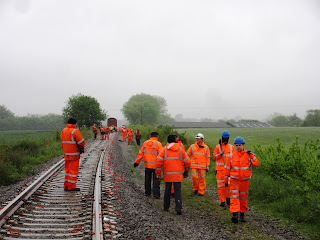 Here's a view of the first two stretches, with the tool van in the distance. Two teams have already got going, while the others slowly fan out over the 1000m that were stressed yesterday.

On the right is the NR team, one of which was sporting a balaclava with only slits for the eyes, and carrying keying hammer over his shoulder. On his way to rob a bank? No, volunteering at the GWSR! 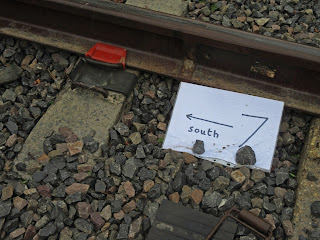 Our little team of 4 made its way from the tool van back down to the bridge, then further on round most of the curve almost to the Laverton straight.

A sign of good organisation was that each stretch of 5 panels was marked out, so everyone knew what they were doing. And no moving those numbers around to make your length a bit shorter at the expense of the next team. Yes, it crossed our minds, but we are gentlemen. 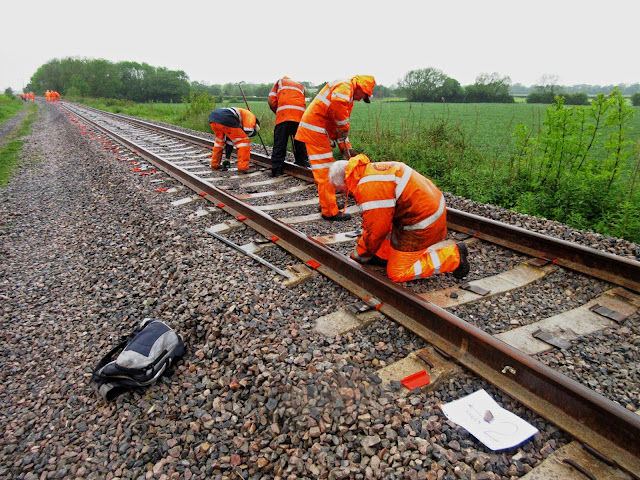 Here's team 2's bit, and they're already well stuck in, while we are still walking to ours, far round the bend in the distance. These orange pads, or 'biscuits', have to be inserted between rail and hoop, on a reluctant sleeper that often as not is slightly out of alignment. The simple task of inserting the biscuits, ready for the man with the keying hammer to whack in the clips, is actually slow and frustrating because so often they do not fit. It means a lot of heaving and fiddling with the equaliser, and often undoing the previous clip again to give the rail a bit more wriggle room. 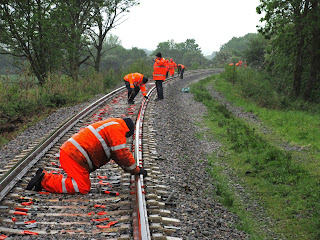 Here's team 7 - Go, team 7! - with in the foreground Peter on his hands and knees trying to sort out the plastics for Chris and John in the background, who are clipping up with the keying hammer and bar.

A sea of orange plastics marks the job we still have to do. All the time it is raining heavily, it trickles down you neck, your hands are soaked, even your feet are wet as the water soaks into your boots. 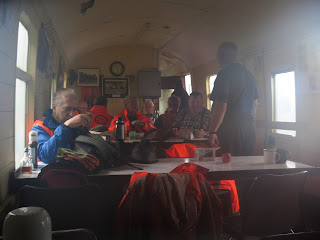 At 12.30 we allowed ourselves a short break in the mess coach. Due to the larger size of the team today, there was no lunch, although, bless him, someone had put on the kettle. Wet clothing is strewn about, and the camera lens has fogged up in the high humidity inside the coach.

The back of the job was broken just before lunch. After our 2km round trip walk to the mess coach at Peasebrook, we returned to stretch No.7 to finish off the last few yards of clips, leaving only the foot crossing at the start of the curve to be done. This can be done when the rubber pads are lifted in.

Looking back on it, it was a very successful day, and we are very grateful to all those volunteers who responded to the call, despite the dire forecast which became increasingly apparent yesterday. Together we did it!

Back at home, a hot shower, a hot cup of tea, the fire lit, and the satisfaction of a great sense of achievement. Now we can move the supply train again out of its isolation at Peasebrook, and fill up with more sleepers to lay more track!
Posted by Jo at 16:31