That was today's objective. We had 160 sleepers still on board, and we need to clear the train so that more can be loaded at Skew Bridge, where 200 are already waiting. 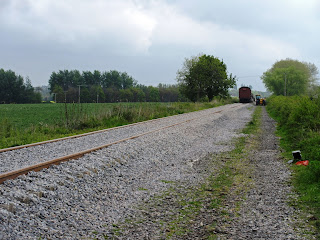 It's a long walk to the supply train at Peasebrook now, starting at little Buckland, especially if you have missed the Landie 'bus'. In the foreground is the northern end of the second section that is about to be stressed. The PWay job is a healthy one, you get plenty of chance for excercise. 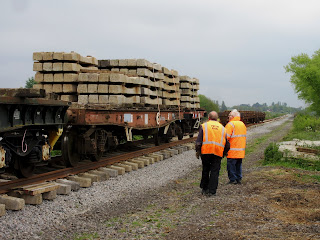 When you get to the mess coach, it's another long walk, past the supply train and then on to the railhead.

Here Pete and Mike look at the sleeper stack that we want to clear today. There are 160 sleepers left to do. 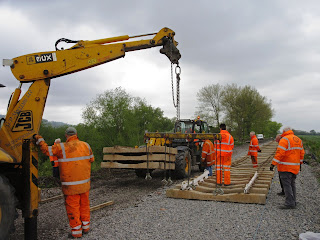 Today we had both Telehandler and JCB available at the same time, so sleeper laying proceded apace. Here Alan is bringing a healthy stack of 12, as Steve waits with the boom and chains. Peasebrook Farm and its line of trees are receding into the distance, as the railhead advances. 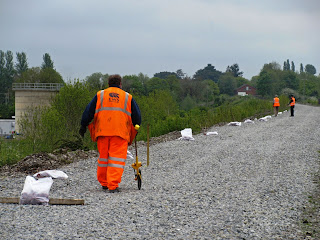 Pandrol clips have been laid out in bags along the bit we will be doing today (a bit too generous, we haven't enough sleepers on site to get that far) and with the measuring wheel Nigel is off in the direction of Broadway to work out where the breather is going to be situated. It works out at just short of Pry Lane bridge, a bit round the curve in the distance.
On the left is the silo of the sewage works. We are getting closer - some say we are already there, because you can smell it! 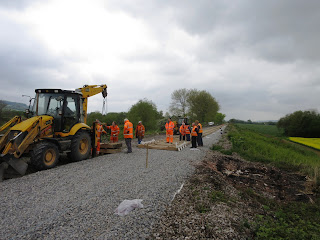 Not long after starting off today, we passed the site of the former PWay hut on the right.

Unfortunately the old hut was too far gone to be saved, all the vertical sleepers had their ends rotten. 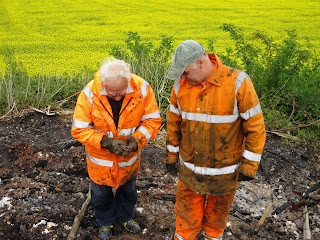 In the remains we found a good collection of cut nails, an old form of making nails.

Mike has a fistful of them, as Bert Ferrule looks on.

Behind is a huge field of rape, which affected one or two of us. 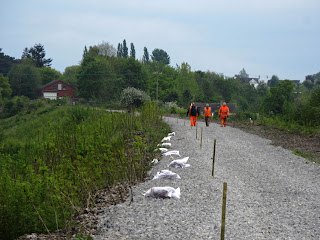 As Broadway slowly gets closer, three of us walked up to the southern fence for the embankment works (see below) and had a look-see.
A little disturbing was the sight of 4 walkers who walked down the same bit half an hour later. There is no trackbed access, unless you climb over a fence. They vanished at Pry Lane bridge and scrambled down the embankment, where once again a fence was climbed. 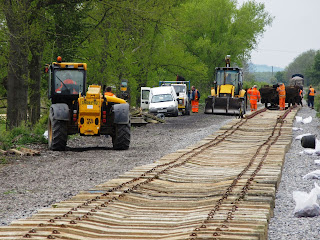 Shortly before lunch, it was decided to split the gang into two again, and use the JCB to start laying in rail. This then leads to a traffic jam in the middle, as Telehandler and JCB wait for each other to pass.
The sleepers are nice and straight here, good work by the laying team. The rails should drop in nice and easy. 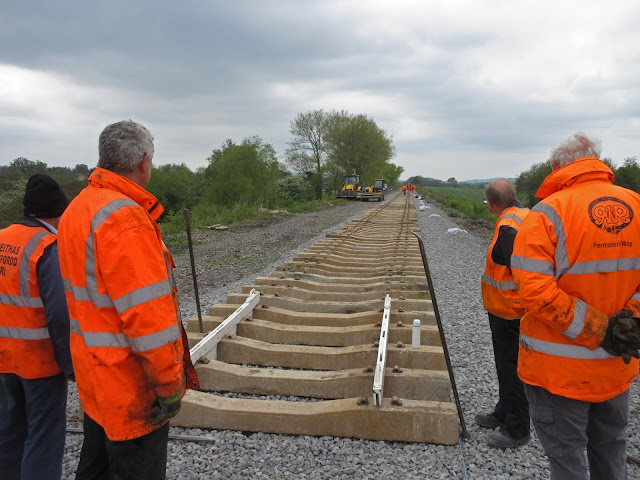 There's a 'passing loop' somewhere near the middle of the working area, where the two vehicles can get alongside each other. It's a bit of a squeeze though, and you don't want to get too near the edge, as the embankment is very high here.
The laying team wait patiently (in ice cold wind) for Alan to return with the next supply. As we passed the trees it became abundantly clear what shelter from the wind they had afforded us. Now we are mercilessly exposed all the way to Childswickham on the tall embankment. 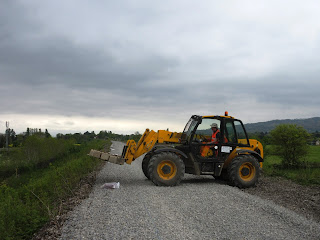 When you lay the sleepers with the Telehandler, it has to face the right way. This is the opposite way to when it arrives, so a three point turn is required on the narrow trackbed, with a steep drop on either side. Luckily the Telehandler has a very tight turning circle. 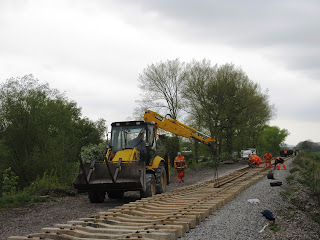 Meanwhile, the rail laying team has gotten into its stride just past the trees. Steve brings up one of the first rails today here. 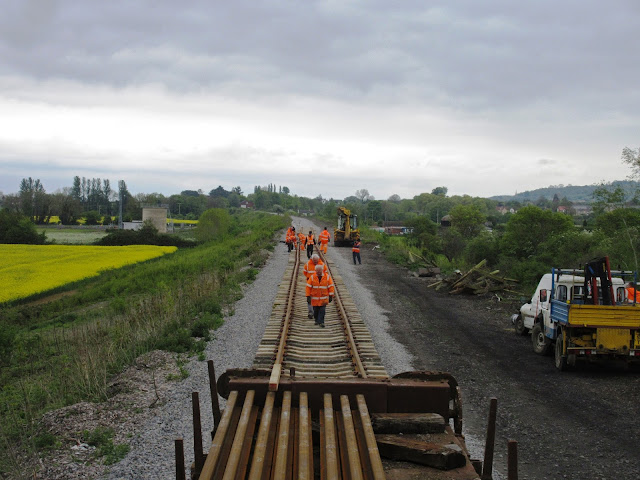 Then it's 12.30 and time for lunch. The gang starts to drift back towards the mess coach.
In the foreground you can see that the first layer of new rail has already been used, and we are on to the second. A second load of two levels is on the other bogie behind the camera. 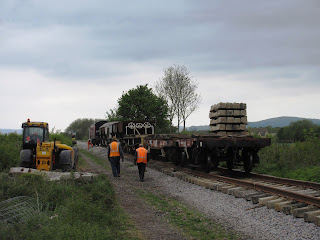 When we finally get back to the supply train with the mess coach on the end, we can see that only 20 more sleepers remain to be removed. That means we laid 140 this morning, and the laying gang is well pleased.


Jim has a vast supply of beans for us, as well as crispy chips and a panful of sausages. After we had worked those down our gullets, there were cupcakes baked by Mrs B. These went down exceptionally well with a strong cup of tea.
Steve is (still) on a diet, but felt he as allowed one cupcake. Imagine his 'disappointment' when the cupcake he picked accidentally had a second still attached to it. What could he do but eat that one as well? 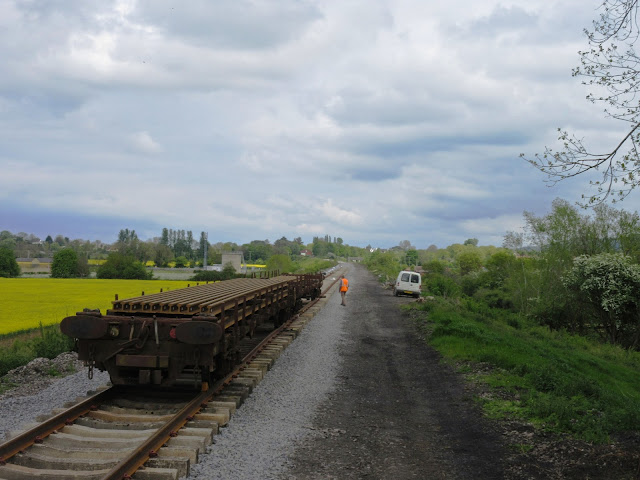 A snapshot for blog readers, taken from the Landie 'bus' as we hitched a ride back to the rail head. The rail wagons have been split off from the supply train and pushed further up the newly laid track, to shorten the distance we have to drag the new rail. The last of the Peasebrook Farm trees can be glimpsed on the right. Just visible in the distance is the red former Broadway goods shed. 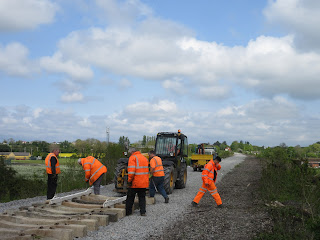 After lunch we laid the last 20 sleepers, now approaching the sewage farm. 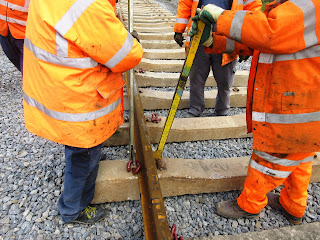 The rail laying team made rapid progress, thanks to the wagons being in a nearer position.

While half of them laid the rails into their beds, the other half straightened up the sleepers, and attached one Pandrol clip in two.

Where the sleeper is a bit low, a special Pandrol lifter is used (on the right here). You can then pull the clip in with a 'Pan Puller'. (centre) 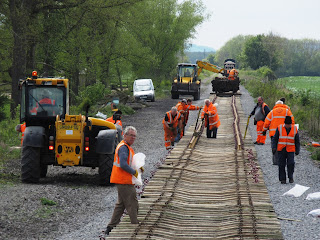 Seen from the deck of the Landie, the rail laying team is busy putting in the first rails today, just past the trees at Peasebrook Farm. 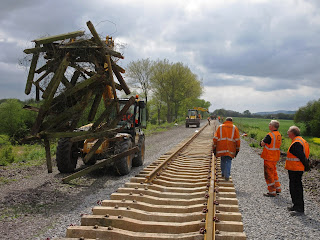 With all the sleepers available now laid, Alan found a useful alternative job for the Telehandler. This is a jumble of rotten fencing material, which is going to a pile below for disposal. 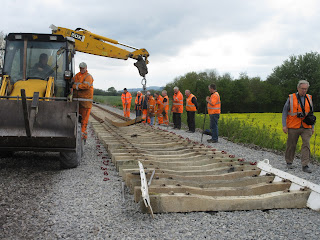 Mid afternoon saw the rail laying gang reach the rail head. Here they are stood to one side out of the way, as another rail is dragged up. Bert Ferrule has a word with Stevie, before changing from chains to Camlock for the final lift into the sleeper beds.

Six pairs of rails were laid today, giving another 110m laid towards Broadway. 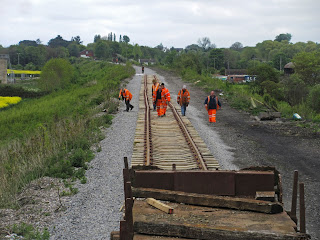 At the end of the day the gang members slowly trudge home.

The first bogie flat has been cleared, and the second already started. More new rail is being ordered, thanks to the success of the share issue, which saw enough money raised by you to lay all the track into Broadway, and complete the main station building.Well done (if you became a shareholder anyway), you are part of this success. 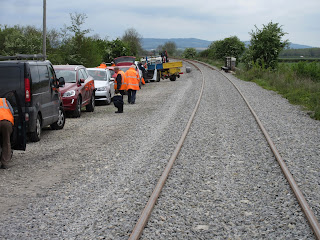 Back at Little Buckland, we are looking south at the bridge and the approximate position of the second pulling point. The northern anchor point is about 500m behind the camera, and was recently ballasted again, to make sure it doesn't move when it is stressed round this curve.
Before we can stress this, the rail has to be cleaned and put on rollers, so the ballast regulator has been ordered in to sweep the section in the foreground. Regulating is booked for next week; the stressing and clipping up for the week after. It's all go, we have a deadline to meet, after all. 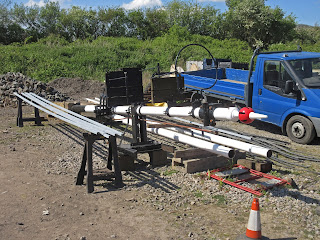 A visit to Winchcombe for some bits for Hayles found an impressive pile of signal posts, freshly equipped and painted. Isn't that a lovely red finial on the end of the nearest one, a route indicator signal which will be positioned at Broadway for trains from the Honeybourne diredction. 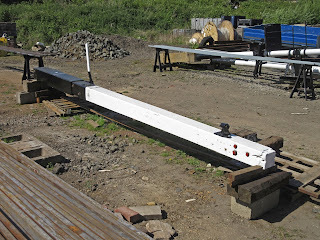 This fourth signal post is an original wooden one, donated by a BAG member who had it lying across his double garage. It will become the platform 1 starter signal.

No doubt this disposal improved domestic relations no end, and piled on the brownie points. (we hope)

The 4 signal posts are ready to go, and are just awaiting transport arrangements to take them up to Broadway. It looks as if this will happen in about 10 days time, and after that they will be erected asap, as this helps the positioning of certain elements of the track layout. Conversely, they can't be dug in if the track is alread in the way, so all the signs point towards 'go' here. 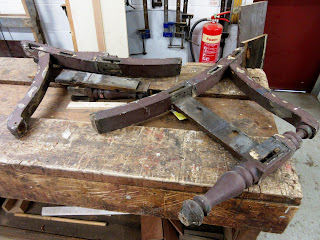 Also seen at Winchcombe is this 10ft GWR wooden platform bench. We all know the benches (which you can buy as replicas today) with the cast iron ends, but this is one of the rarer all wood ones, which a member was lucky to find. It needs restoration, and a start has just been made by one of the craftsmen in the C&W department, who were very kind to offer to help restore this precious GWR item. 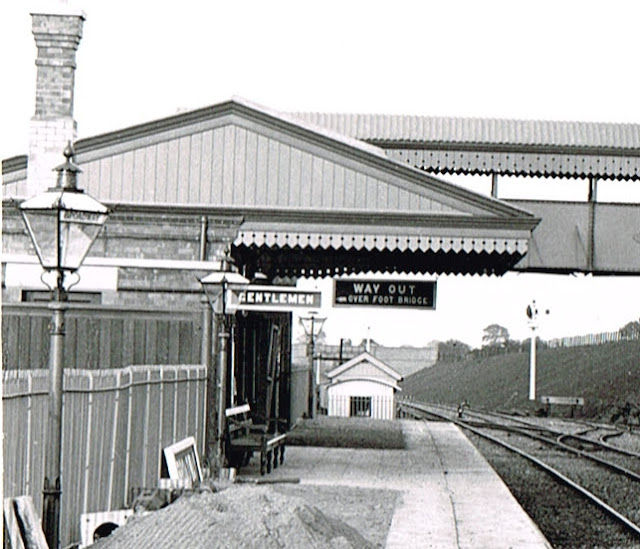 If you look at this very early photograph of Broadway, you can see one of these all wooden benches under the canopy on platform 2. On the right is the horse dock headshunt, which sadly has had a large reinforced concrete raft poured on top of it, for the positioning of two steel containers as a permanent structure.
In the background you can make out the ridge of a roof. This was the first signal box at Broadway, which was used when Broadway was a temporary terminus while the line was further built to Toddington.
In the foreground is evidence of the construction of Broadway in that summer of 1904, and it would seem that the running in board and a number of lamp posts still remain to be put up.

Two recent pictures of the Broadway embankment works will also interest you. 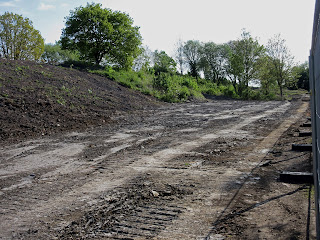 George Law have now completed the earthworks, which consisted of smoothing out the embankment slope to give access to the soil nailers, and levelling the various spoil dumps at the bottom into a flat area which extends about 2/3 of the way back to the Childswickham Road. 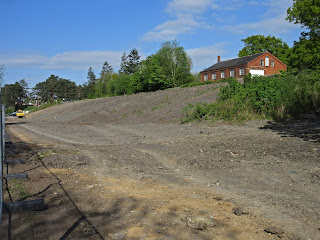 Seen from the south, you can see the embankment cleared of vegetation, and a large flat area in the foreground.

It's a good start for our future car park, if and when we can find the money for it. 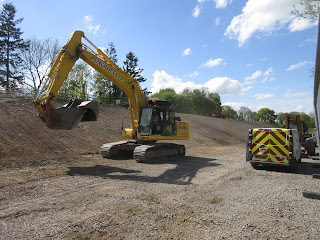 Yesterday the contractor for the earthworks was clearing up, while the first pieces of machinery for the soil nailers were being delivered. 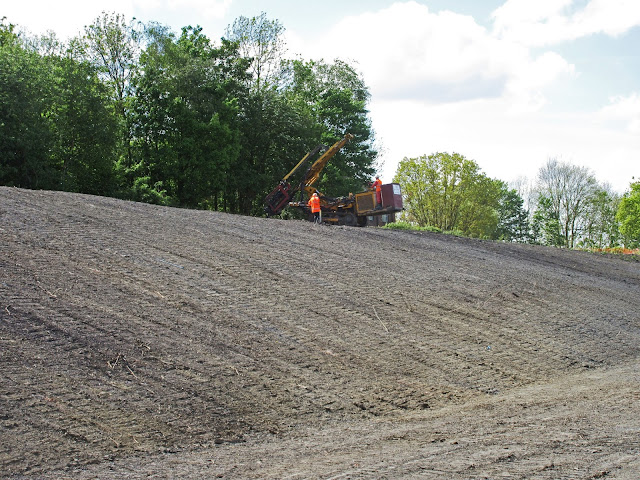 In this most recent picture, you can see one of the drilling rigs that has just climbed up the slope to the top, by way of a test.
The slope shows numerous caterpillar tracks (as does the flat area in the forground) where the rearranged earth has been tracked in to compact it.

You'll be pleased to hear that while the bottom of the slope was tidied up, the top was left pretty much as it was, so the trackbed of the up line is still there.
Posted by Jo at 19:02