Type 1? No, not a class 20, this refers to the grade of material we are now bringing in.

This report covers Wednesday and Thursday, the third and fourth days of ballasting at Broadway north. 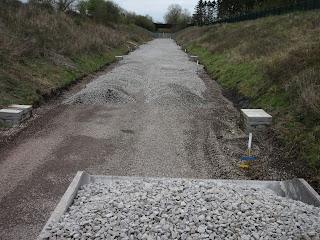 On Wednesday the same team of two contractors (one at each end of the operation) and two volunteers carried on with bringing in ballast into the first half of the 350m north of Broadway. 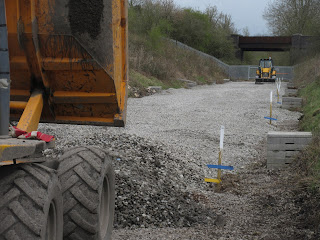 At the back, Steve is levelling the site, using an old point timber as a plough.


In the foreground you can see some yellow level markers start to appear. These indicate that infill with type 1 sub base is needed for everything lower than the yellow bar. 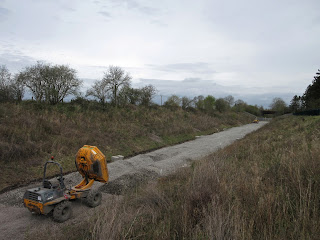 We shifted a further 8 lorry loads on Wednesday, say 160 tons, and so doing brought the newly ballasted section about as far south as we wanted. From here on, further south would be 'type 1' ballast, a cheaper form of sub base that we are using to get the levels up, before we start with the more expensive railway ballast that we know.

In the picture we are about half way up the 350m, near the changeover point. 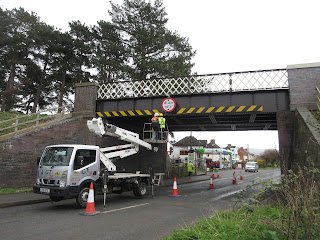 The same day also saw the bridge inspection for which we had been waiting. Here the inspectors are looking at the initial point of impact.
Note the circular height sign - this is a prohibition sign, not a warning. However, many of the strikes were by vehicles carrying something (digger, skips, containers etc). With vehicles of a fixed size, the height is usually given in the cab and the driver is familiar with it. In the case of a load being carried, this actual height may not be known to the driver, hence prohibition signs are rather less effective and Broadway bridge gets hit. 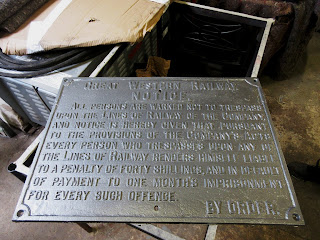 After work on Wednesday, a trip to a local fabricator / shotblaster to pick up the repaired Trespass notice from Hayles. You may recall that we found this original sign in the grass, with the top RH corner shattered.
The notice has been beautifully repaired and is currently on your blogger's dining room table being painted and relettered.

It will go back to its original location at Hayles Abbey halt. 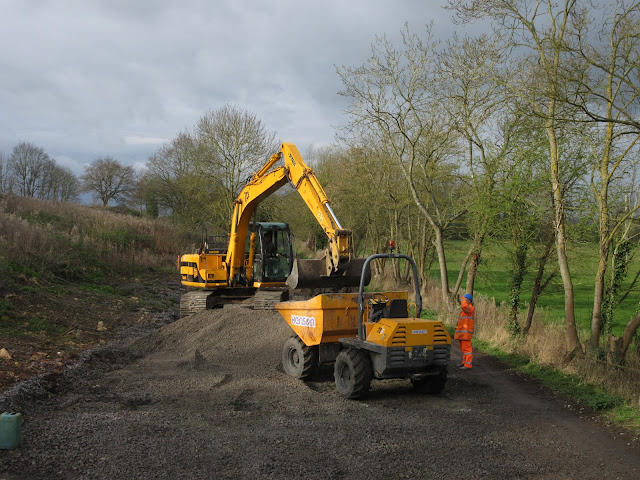 Today, the fourth day of ballasting, found us with 8 lorry loads of type 1 crushed stone. It's nice and sunny here, but most of the time we saw a steady warm drizzle, hence the wet weather gear that John is wearing. A benefit was that the wet prevented the clouds of dust that we could so easily have had today with this smaller diameter stuff. 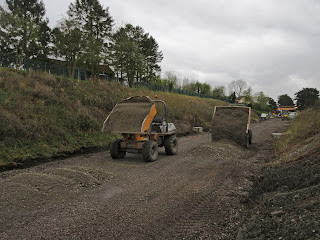 With two dumpers on the go, we made short work of our pile in the 'car park'.

Most of the time we were at opposite ends of the site, but occasionlly we met at the same end, so the opportunity for a joint photograph.

Steve sat on top in the JCB and levelled it as we went along.

Oh - oh, someone didn't look at his pouch properly, and seems to have picked up the Broadway - Weston Sub Edge token instead. We don't want another Abermule here. Now what? 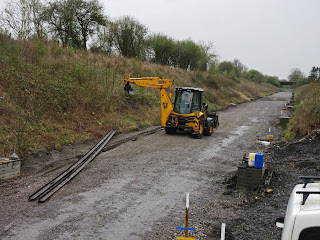 Having made himself a little base for the rail lying at Childswickham, Steve started to bring in more pairs of rails in between deliveries. They will go to their final place once all the ballast is in. 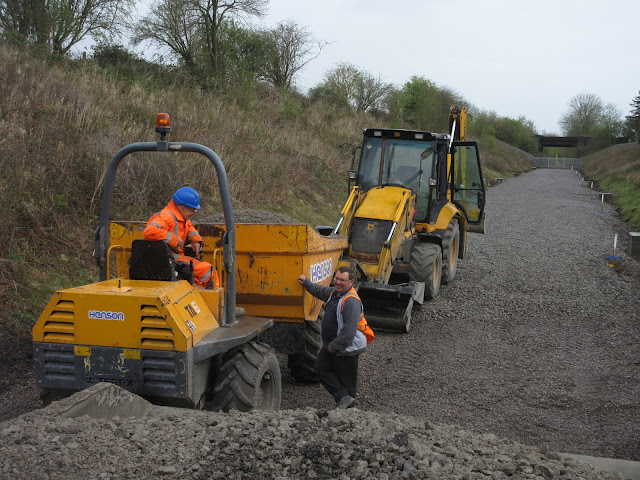 The type 1 piles seemed to go down faster than the track ballast piles, and by elevenses we were all done for the day. A phone call to the quarry could only get a promise of a big load tomorrow, so we will be back.

Coming to the end of the excercise today, Steve and John enjoy a chat about the progress you can see behind them. We felt pretty chipper about how it has gone so far.

We need to finish off the 350m stretch with the type 1, then go back to the middle and add a layer of track ballast on top of it. That should see us into the middle of next week.

Monday will see the corrugated iron shelter lifted into its place at Hayles - you read it here first! 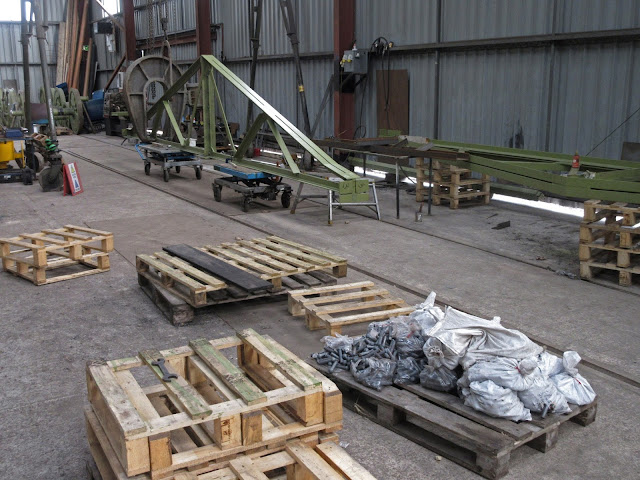 With an hour to spare, we had a mooch round Toddington. You can see just how much room is taken up by the canopy assembly, and this does not include all the finished pieces that are stacked outside.
The riveter is now being used on the first of the trusses. Another truss is waiting on the right, and sackfulls of new rivets are piled high in the foreground. 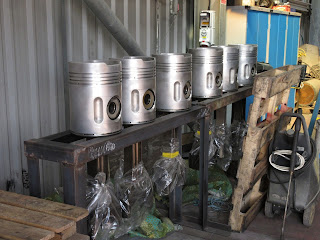 A peer into the diesel shed revealed an absolutely gleaming green class 37, door handles and even brasswork highly polished. They look as good as vintage cars, but 100 times as big. There's excellent restoration work being carried out here.

By the door is a row of pistons, each as big as a small dustbin. Conrods are neatly bagged off underneath. These are for the class 47 being restored further back. Size does matter if you are a diesel engine.

An acquaintance used to be a fitter on an ocean going cargo vessel. He explained that the ship used to have an access door - in the engine's crank case! 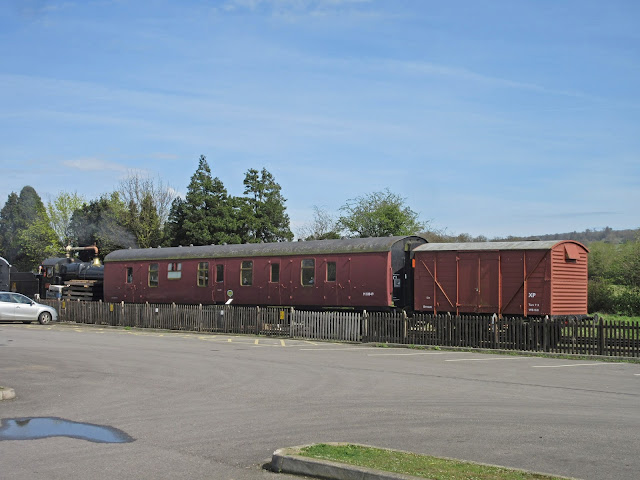 To round off today's report, a picture of the PWay mess coach in the 'parlour Road' at Toddington. It is flanked by a Conflat on the left with timbers on it, and the box van on the right, which contains the materials. This little consist is destined to be our support train for the extension from Peasebrook to Childswickham. We expect to have another day of track laying on Saturday.