Following a question on the last blog post, and an invitation from a canopy construction team member, here is an update on the replica GWR canopy for Broadway that is being constructed at Toddington by members of the loco department. 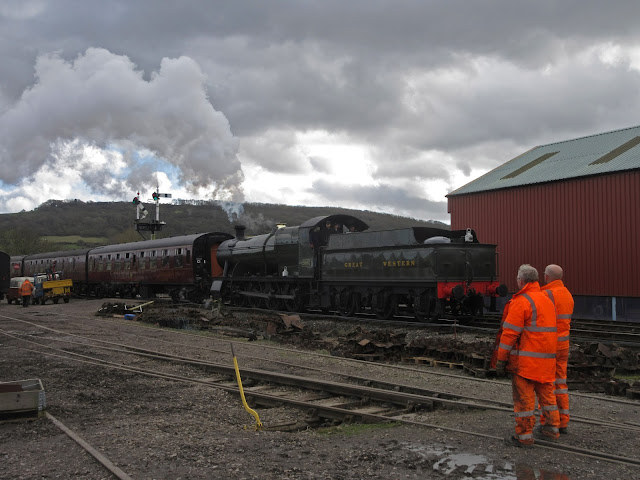 The day of the visit started with the PWay gang at Winchcombe, who were preparing wooden sleepers for Peasebrook Farm and Childswickham Road bridges on the extension. As we are all train enthusiasts, pardon us for pausing to cheer along the first service train of the season. It was quite well filled; even more so the DMU, which followed. It's a good start to the commercial season. An unobtrusive visit was then made to the new relay by the tunnel after the passing of the heavy freight loco, but all is well. 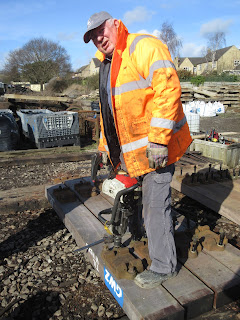 Having drilled 6 times each of the 28 new hardwood sleeeprs for the two bridges, PWay gang member Neil went on to screw down the chair screws with the nut runner.

This two stroke motorised 'spanner' looks light enough, and you'd think that all you have to do is put it on the bolt and hold it in place. But it turns out to get heavier as the job progresses, and the torque reaction addresses muscles that didn't have to do a lot when in you were in your day job.

Neil and your blogger took it in turns, to give each other a rest. Then Steve came along with a bigger model still - it turns out we had been issued with the 'junior' one - and tightened the chairs up further still. Ah. 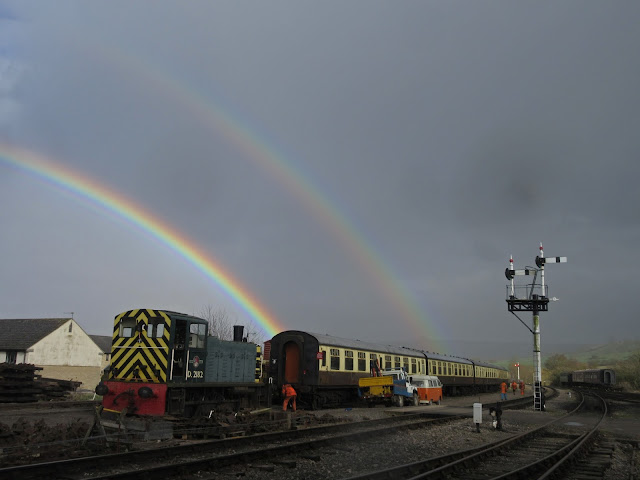 We were spared the showers that dotted the landscape, but this near miss made for a great double rainbow, as C&W were shunting their 'newly restored' and 'about to be restored' coaches about the yard.

At the end of the day then a visit to the loco shed at Toddington, where an authentic replica of the original Broadway canopy is being constructed. It really is impressive, and a lot of thought has gone into the complicated joints and angles, where several pieces come together in the same place.

The main pieces being constructed are the trusses, purlins and fascia boards, plus the arched ridge purlins. Next to that are numerous small brackets and plates that support and allow the larger items to join together.

It's probably useful if you look at this picture of the Toddington canopy, which is exactly the same, albeit that the building at Broadway is longer. 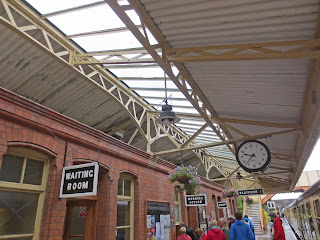 The trusses are the big triangular items that support the whole canopy, and reach out over the platform. The purlins are the long ladder shaped items that run down the centre of the platform. The solid fascia boards are on the right; the E Finch worksplate can just be seen attached to one of them. Down the centre of the canopy, above the platform side facade of the building are the arched ridge purlins, which are the most striking feature of the canopy. They are tricky to make, as they have a curve of changing radius. Finally, short ladder like rafters support the canopy between the trusses. Solid corrugated iron sheets cover the area over the building, while over the platform the roofing includes a long glazed panel which, as you can see, lights up the platform underneath perfectly. Broadway will also have three replica canopy lamps, which have been funded by a generous supporter, and which are being specially constructed after careful scrutiny of period photographs. 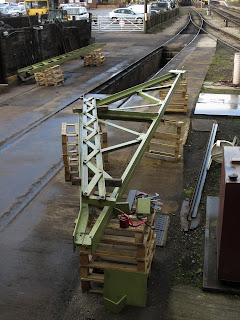 There are 7 trusses to be made in total, and so far we have made 3 of them. They have been painted in primer and this one is back outside the workshop for additional plates to be fitted to the ends so that the fascia boards can be attached to them. On top is a rafter which has been fully riveted, except for the ends which are being fettled for a perfect fit. 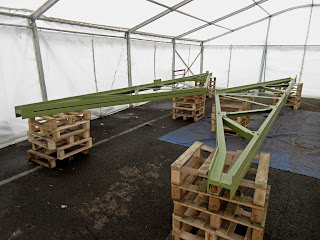 Inside the painting marquee in the car park are the other two trusses.

They have been painted in primer, although like the one outside further work such as riveting and the fitting of the end plates still needs to be done. 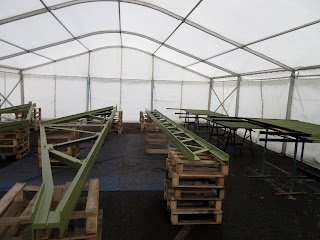 In the middle is a fully riveted purlin, while on the right is the painting area for the spearhead fencing sections being manufactured at Broadway. These are taken to Toddington for painting, and then returned to Broadway ready for installation. 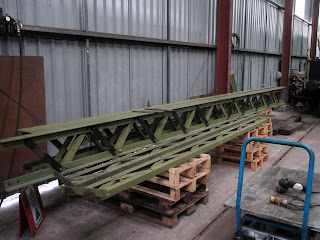 Inside the loco shed is the production line for purlins and rafters. These examples are complete, but still need further riveting. Underneath is one of several signs warning of sudden noise. 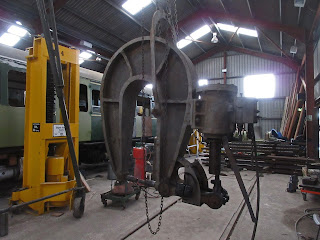 That is a reference to this little beastie. It is a compressed air powered riveter, which the loco dept were able to borrow from a friendly railway. The sudden noise comes not from the riveting itself, but from the release of the air pressure from the cylinder when the jaws are opened again. 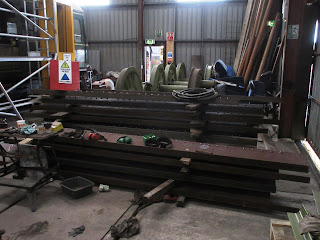 Behind the huge suspended riveter is this pile of fascia boards, all cut to size, assembled and already riveted. 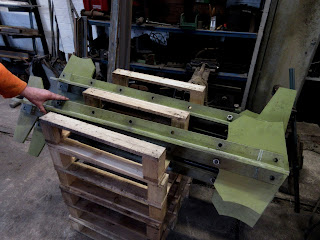 In the workshop, the former Toddington goods shed, the centre pieces for the 4 trusses still to be made are proudly shown off. It is hoped that these 4 could be complete by the end of the month. If that is so, then something like 80% of the canopy frame will be finished.
The arched ridge purlins were going to be made in-house, but as the canopy construction is a few months behind schedule, it has been decided to accept an offer from our steel supplier to have them made off site.

The assembly of the canopy structure has been delayed by a couple of factors, the principal ones being the closure of the workshop for a period for a complete rewire, and problems with space in the loco shed while the floor was being concreted. We have addressed the delay with additional volunteer labour, and even a board director was sighted helping to paint the steelwork. So we are all mucking in. 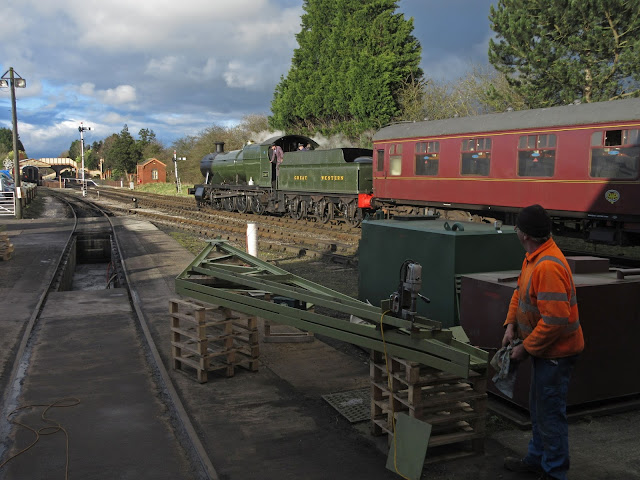 Yes, we also run trains! At the end of the day, Neal takes a break from drilling holes with the mag drill to watch 2807 come home with the last service train.

CAD drawings have been given to our steel supplier for the manufacture of the arched ridge purlins, and a site visit is intended in a few days to check on progress there. Once the ridge purlins are delivered to Toddington, a test stretch of canopy will be assembled in the car park. This will involve three trusses and two of the ridge purlins, i.e. a trial run with two bays.

You are now fully informed! (but the extension is not yet fully fundend, so if you can help, please do)
Posted by Jo at 11:37