A challenge was thrown down by the Wedenesday gang: can you finish off the preparations, so that everything is ready for the stressing team next week?
The glove (or was it the broom?) was picked up by the Saturday gang today. Thirteen of us hit the one kilometre stretch and levered, brushed and inserted all day long. 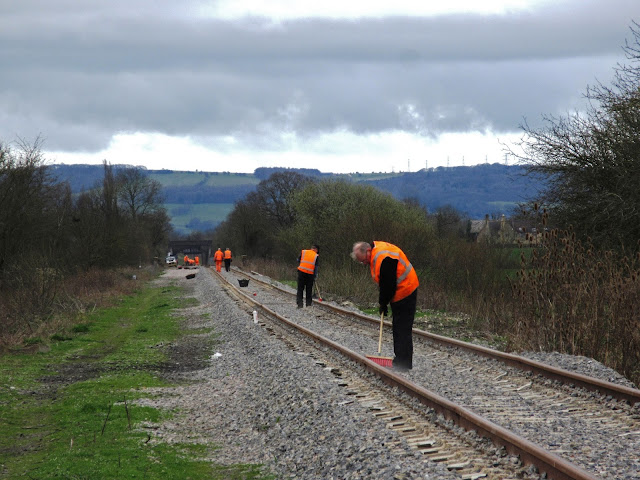 The brushing gang split into two, and headed both north and south of the pulling point. All the extracted clips lie on the sleeper ends. 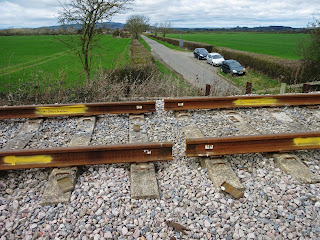 Here is the pulling point again, now stripped of its special bridging fishplates.

This is where the action will be on Wednesday next week. The rail will be tensioned according to calculations made, welded up, and initially completely clipped up for 40 metres on each side. That will fix the stressed rail, and on a subsequent date all the other clips, about 2000 of them, will be hammered home. 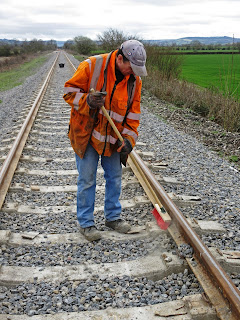 On the northern side, a gang of two on brushes finished the last 11 panels not completed earlier this week.

We then finished the unclipping here, also partially done on Wednesday.

This picture shows you why the brushes are needed. The regulator removed all the excess ballast and put it on the shoulders, but little piles of spare ballast remain just where you don't want them, on top of the hoops in the sleepers. From here they will creep underneath the rail when you lift it, and the rail won't seat properly when you drop it down again. 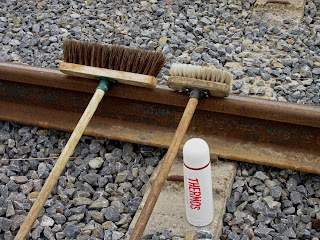 Brushes come in two sizes - Junior, and Excecutive. If you're new to the team, you get 'Junior'. And like it. Upgrades on merit only, you need a good 'track record'. 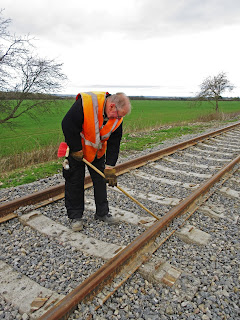 Handling specialist equipment like rail brushes is not for everyone, you have to have shown a natural inclination for the art.

Some people never learn, others relapse when close to the expiry date of their certificate.

This member of the gang clearly needs additional training. Time to go home and read up on the manual too, which is the business end again? 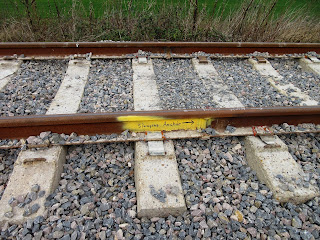 This was our target for the day, the anchor point, both north and south. To the left rails unclipped, to the right, 5 panels of fully secured rail. That won't budge when you pull on it. 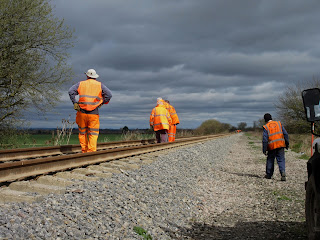 Admittedly somewhat to our amazement, we seemed to absolutely shoot ahead (it is true, this team of 13 was bigger than Wednesday's team of 9) and towards the end of the morning the southern gang reached their anchor point, all rails on rollers too. They then wandered over to the northern section, here near Laverton bridge on a thick bed of ballast. After a pleasant sunny morning, the sky became increasingly threatening in the background. 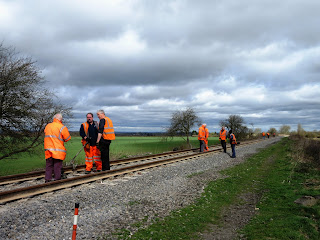 With the northern team still brushing and unclipping in the distance, the southern team came to their aid and started lifting the track to insert the rollers. 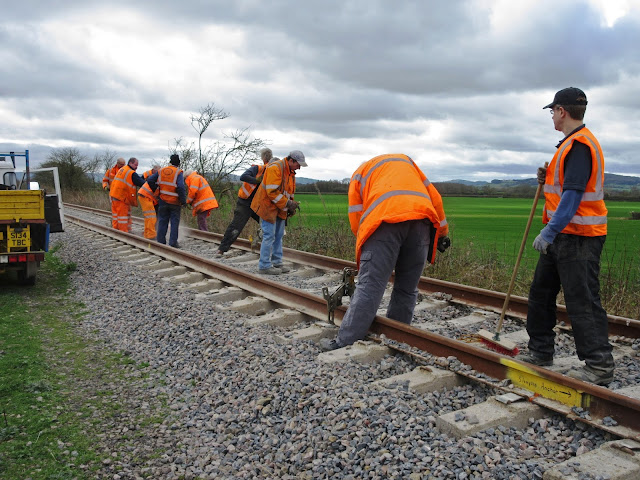 In this way, it wasn't long before the objective for the day was reached - the northern anchor point for the first kilometre. Here the whole team is seen lifting, brushing and unclipping all at once. Neil is astride the rail, with ballast not yet brushed off behind him, and clean rail in front.
We then repaired back to Winchcombe for a hot meal, today prepared by two chefs at once. Paul and Jim did the honours, and very happy we were with the result too.

With this kilometre now ready for stressing, what else could we do? Well, there is the next kilometre (and there will be a third one after that too) so we came out again after lunch and started brushing from the next pulling point. 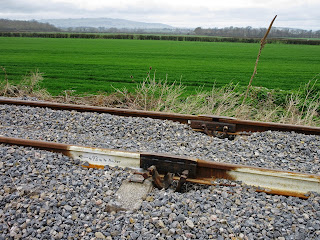 Here it is. This one is just south of the next bridge, Little Buckland. Once again you can see the bridging fishplates, and the inscriptions for the distances to the anchor points. It's 493m to the next one south here. 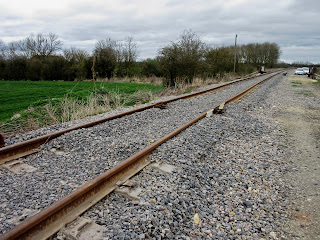 The pulling point at Little Buckland is surrounded by thick ballast. It looks as if the regulator stopped here, as the track is clean in the bottom LH corner. The next stretch is not yet done.

In any case, we can sweep here, but not unclip, as the extension train is ahead of us and needs to be retrieved before we make the track (temporarily) unuseable. 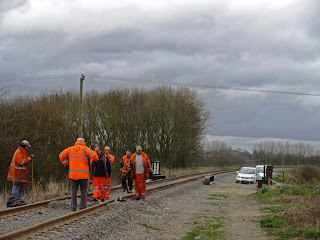 As we scratch our heads over the presumed movements of the regulator, a well known Renault screeches to a halt and disgorges a posse of men armed with brooms. 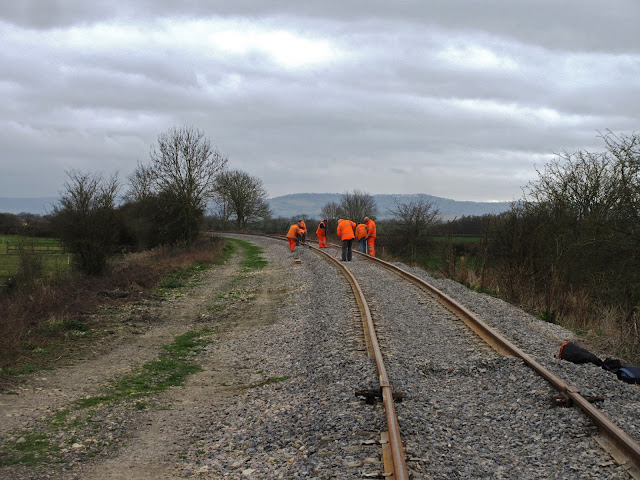 They slowly work their way south towards the previous anchor point, at the other end of this curve. We brushed 11 of the 30 odd panels on this section, which is a good start.

On Wednesday next week it's all hands on deck for stressing, and in particular for clipping up as much as possible. Your blog will be there!

We haven't forgotten track laying of course, we just need to get this stressing action done, then thoughts can turn back to extending further northwards. We need to empty both the rail bearing flats as well as the 170 odd sleepers that are still on the train, then move it all over the newly stressed section southwards for reloading.

More ballast has been ordered for the Dogfish next week, and a further shipment of rails has been bought, thanks to the ongoing success of the share issue. Two more lorry loads will arrive at the end of next month.

It is wonderful to see that our share issue has almost reached its target, but please don't stop there. Remember that we now have to pay for the £400.000 - odd embankment repair at Broadway. Only a much smaller cost for this was expected when the prospectus was written.

Other news:
The growing pile of components for the Broaday canopy now occupies almost a whole road in the loco shed. The painting marquee has been removed again, so painting of the fascia boards is now taking place at the point of manufacture. 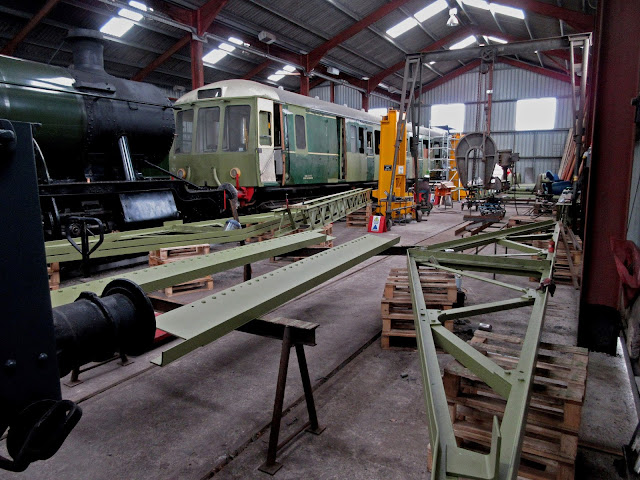 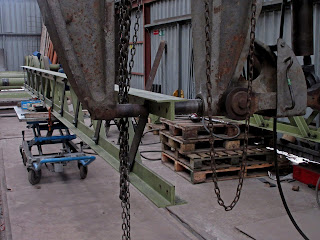 Riveting continues. The items such as purlins and fascia boards are all assembled initially using bolts, and once there is a big enough batch the bolts are removed and replaced with proper rivets.

It might be possible to film this - fingers crossed! 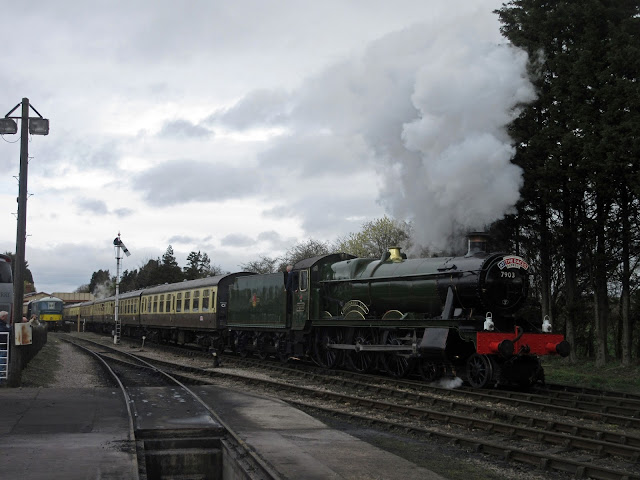 Outside the loco shed, big eight coach trains were chugging by. Here Foremarke hall slowly pulls out a packed train of race goers from platform 1 at Toddington. The placing of the lamps left and right  indicates an express passenger train. (a bit of poetic licence at 25mph, but we like it)

Platform 2 was occupied by an equally long and packed train of happy punters, here hauled by P&O, our big Pacific. It left a quarter of an hour later. The car park was bursting, with many coaches gingerly manoeuvering about, having discharged their passengers from all points of the compass.

Looking at the windows of the train as it passed, we saw that our guys on board had done their job well - every table was laden with Champagne or Guinness. Happy faces all round, it's good to see what a success this is.
Posted by Jo at 18:08