Getting ready for stressing

The stressing team is coming a week today! It's all hands on deck now to get the rail ready for this. We've got one kilometer of track to prepare. 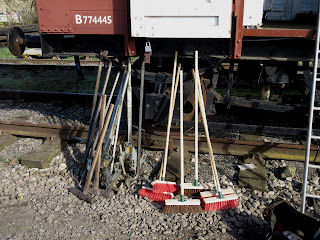 First, the specialist tools of the trade.

Bars on the left, and yes, brooms on the right. That's right, household brooms. The Saturday gang brought 4 new brooms ( a new broom sweeps clean, after all) and today we bought two more, thus increasing our sweeping capacity by 50%.  No expense is spared, and hang the budget, we have a job to do. 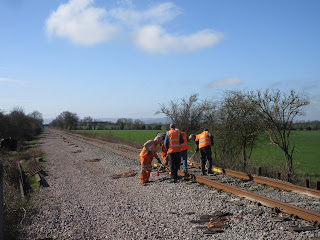 You're probably wondering, why do we need brooms if we had the ballast regulator round?

The answer is that the ballast regulator swept the track very well, but stones remain in the web of the rail, and when we lift the rail for stressing, we cannot allow any stones to fall back underneath it. So the area round the clips has to be squeaky clean of any ballast.

Because of the race trains this week, many of our volunteers are helping on this essential service, and it left a much reduced team on the Wednesday gang today - we were only 9. Here is the sweeping team, setting off from the first stressing point at Laverton bridge and brushing southwards. It feels a bit like curling, with busy sweepers left and right. The gang of six successfully reached the anchor point half a kilometer away in the distance. 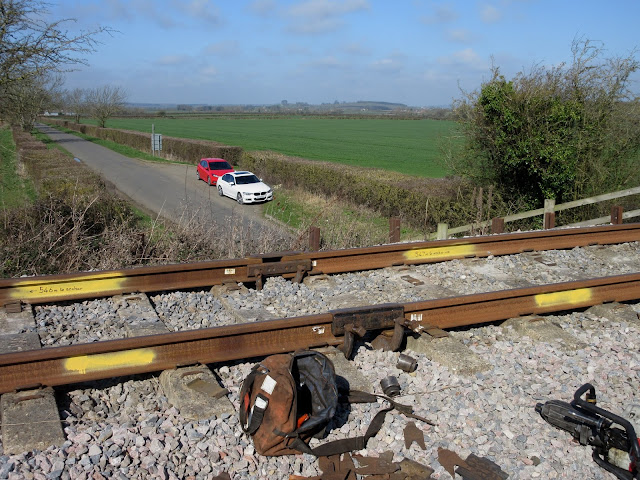 Here is the actual stressing point, just next to the bridge. The notes in the yellow flashes say 546 and 547 meters to the anchor. This then is the middle, and the two rail ends will be pulled together to close the gap that you can see. Everything is nice and clean here. 546m left and right are the anchor points against which this is pulled, two sections of 5 fully clipped up track panels. When the pull has been done, the gap will be welded shut and the first 40 meters on each side quickly clipped up to hold everything in place. Then the rest has to be clipped up as well, with rubber pads and the little orange 'biscuits' on the rails. That's a major excercise in manual labour. 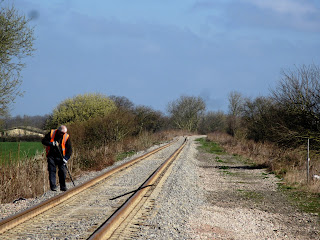 While the brushing teamheaded south, an unclipping team of two headed north. When the track was first laid, the rail was held down temporarily by alternate clips. This allowed ballast trains, the regulator and the tamper to pass. Now all these clips have to be removed again, so that the rail can be lifted and rollers placed underneath.

The northern anchor point is a bit short of the start of the curve here. Robert is nearly there, isn't he? 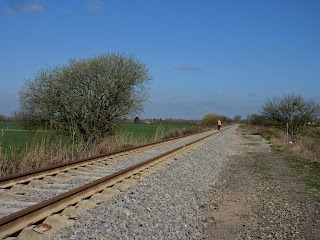 That's because the picture was taken with a zoom lens...

Here is the same picture on a wide angle, and he's still got miles to go!

In fact we had 30 panels to unclip going north, and today we managed 19 of them, so 11 to go. A shorter section was unclipped on the southern side, as the team had to do the brushing first.


The brushing was repetitive, and the unclipping challenging for the back, having to bend down for every clip. We were glad when the signal was given to return to the mess coach for a gourmet meal prepared by Paul, while we were hard at work. 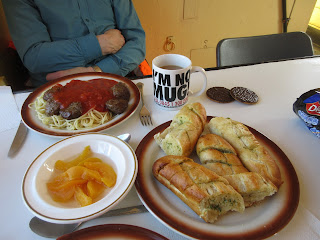 What's this - foreign food? Spaghetti and meatballs, with garlic bread. Peaches for afters, then a biscuit and a mug of strong tea. Plates were scraped clean, then there was a hush as we contemplated our 'food babies'. Now back to work. What? Really? 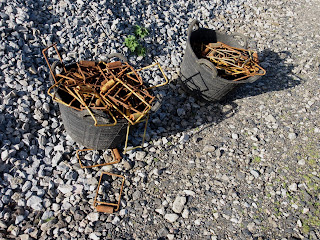 Back at Laverton, we were faced with a plentiful supply of these. They are the rollers that have to be inserted under the rail, so that it can move along when it is stressed. They go in on every 8th sleeper. 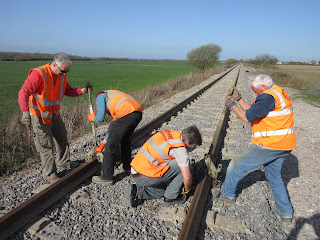 A start was made in placing the rollers on the northern section. There were two 2 man teams.

One man places a lifter on top of the rail, a jaw with a lever on it that, when pushed down, lifts the rail just enough to push the roller underneath. You then let go again, and the rail comes back down and sits on the roller. 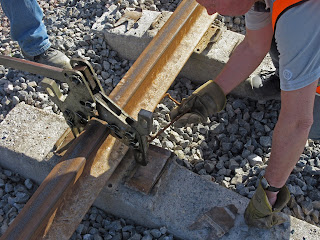 Here Peter works the lifter (a fiendish contraption which tries to cut off your fingers when you lift it into the Landie) while Lee pushes a roller under.

Do not insert a finger to check that it is in the right place! 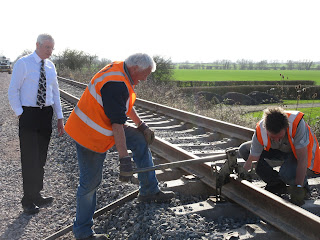 No doubt aware that we were a bit short staffed today, a further volunteer arrived to offer his services. 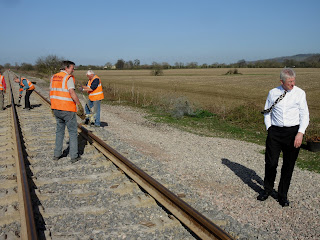 Given the brush off for not wearing a high viz vest, he turns away in disappointment. He was next seen serving champagne on a race train, so somebody appreciated his skills. 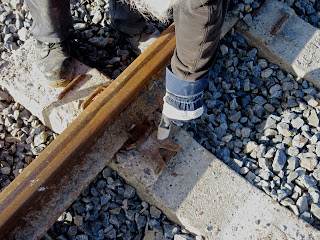 And then we get those things sent to try us. You'd think that after placing thousands of these clips, volunteers must know which way round they go. But not this way round.

Another example of Murphy's law - if it can go in the wrong way round, eventually someone will do it.


At the end of the afternoon, we had all gained a lot of colour in the splendid sunshine today. There was even talk of shorts next time. We felt we had made great strides forward in the preparation for the clipping, but there is at least another day's work here, or even two. One more week to go!


At Broadway, we can report that the excavation of the horse dock headshunt was successfully completed on Friday. 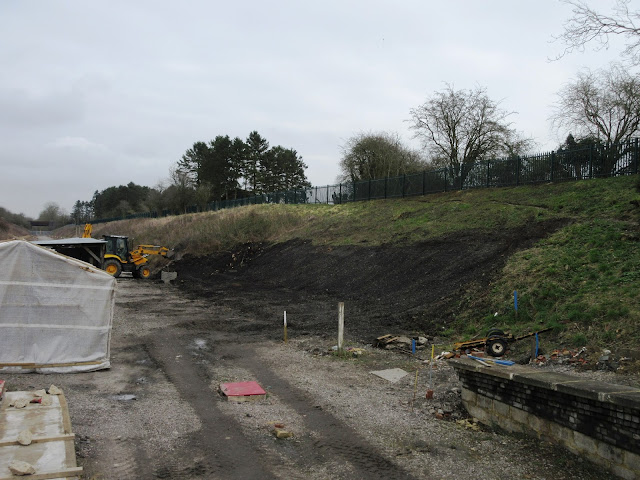 Because of the greyness of the ash, the picture doesn't really do it justice. However, we have revealed 50 yards of the original 100 yard siding that led to the horse dock, now buried under the platform extension on the right. The slope from the top is now back to its original uniform gardient, and the spoil once tipped here, demolition rubble from the station, and clay excavated from the new platform footings, have all been shuttled down to the future car park. 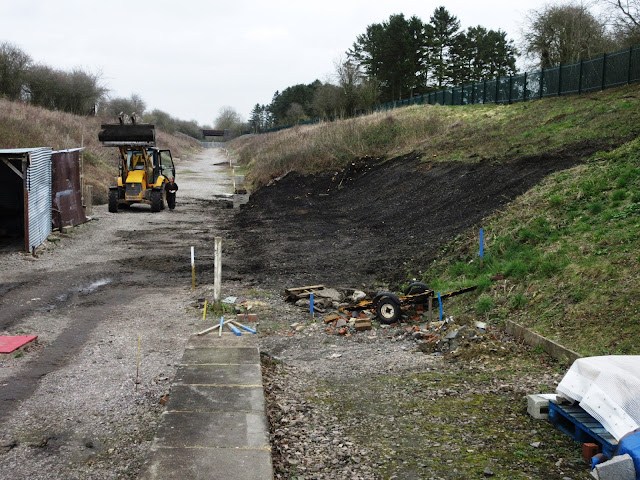 This shot better shows what we have revealed. Passengers photographing the engine running round from the platform end would see a turnout and two signals here, and two 20ft containers for a maintenance facility.

The ballast levels here have now been determined, and we are ready to start bringing the ballast in.
Before we start track laying here however, we will complete the section from Peasebrook Farm to Childswickham Road bridge first. This will resume as soon as we have finished stressing the section already completed.