Yesterday our contractor Steve and two volunteer dumper drivers started bringing in ballast to Broadway north. This is the 350m long stretch from the end of the platforms, to our northern boundary at Springfield Lane.

Due to a camera failure, you didn't get a report, but the battery has now been spoken to sharply and is back in service, so here is two in one. Yesterday we shuttled up 150 tons, and this morning a further supply of new ballast had been delivered to the 'car park', so we were ready to attack a second day. 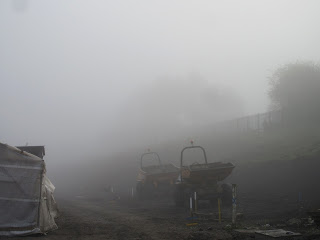 Dumpers don't have foglights (they don't have a lot of things, but we manage) so we drove 'by sense of smell' - for the fans of the opera 'Tommy'. 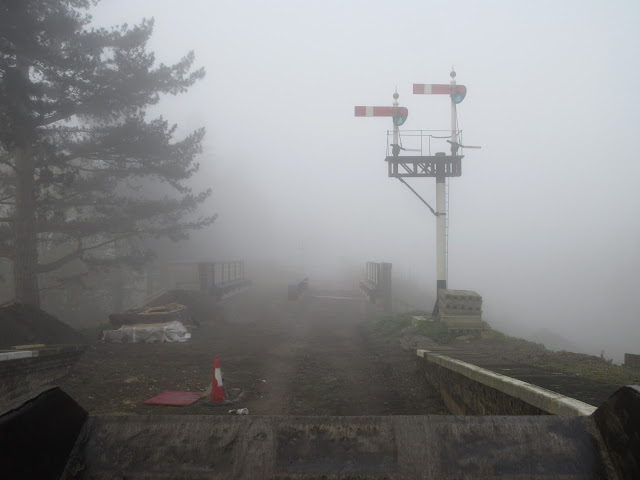 It's a tricky manoeuvre in the fog here at the road bridge. A collapsed catch pit ring on the left, the platform edge on the right. Steve brought over a supply of steel plates for the catch pits, so they won't give us any more trouble now. Then a zig-zag over the bridge - straight ahead has been taped off, as a bridge inspection is due following yet another strike, the 10th in 2 1/2 years. What to do, without spending a lot of money? There is no easy answer. 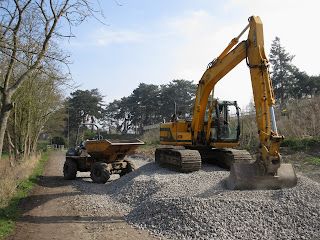 Down in the 'car park' another 6 loads of ballast were delivered first thing, and we had a 360 going with a big bucket, so we loaded quickly.

After spending an hour covering the two most hindersome catchpits with steel plates, the sun had come out and it was a glorious day. 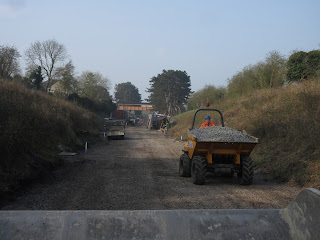 Two dumpers ran up and down, with a long 'single track' section down the middle as only half the trackbed was made available between the platforms. Luckily we had 'passing loops' at each end, and knew each other's rhythms. 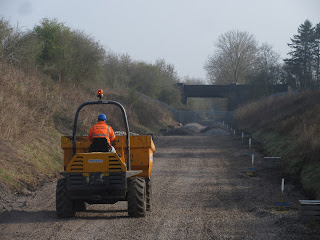 In this picture you can see yesterday's piles of ballast in the distance, and a row of marker posts on the right indicating the ballast levels to be achieved. It was a bit hit and miss to start with, as rather than lay two track's worth of ballast in two rows, we were filling in the bottom of the cutting, which is slightly wider. Over the last 5 years quite a bit of spent ballast has been extracted from this stretch, and used to backfill the new platforms, so clean ballast has to be put in its place now. The levels are also slightly different, as we are starting from platform ends which are longer than before, and the extension of the platform, itself level, was built on a falling gradient. All very complicated. 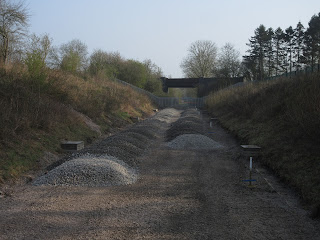 Steve's instructions were to get it down there; he would sort out the levels.

From this picture you can see that we were quite busy yesterday, as these piles have so far had only two drops added to them today (the whiter ones nearer the camera). 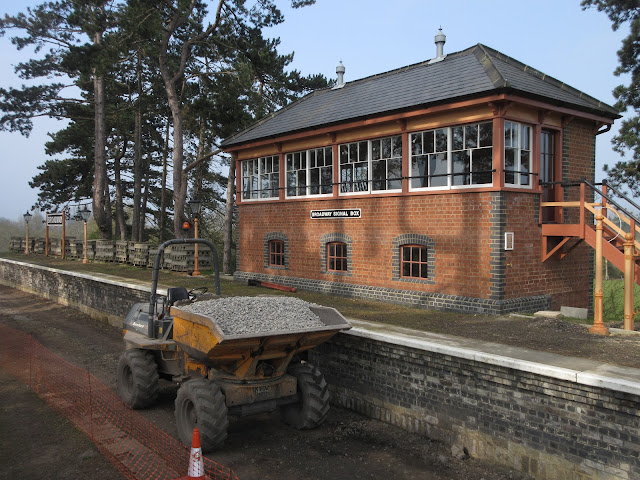 Here's a scene many of you will have waited for eagerly. One of the first dumper loads of ballast is paused outside Broadway signal box. We've got several more days of this to go yet. 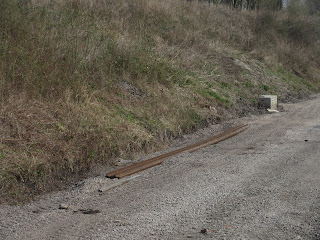 In between times, Steve also started bringing up the ex Laverton Loop rail, which will be laid at Broadway north in the form of a siding and a headshunt. Unfortunately the JCB suffered a burst hydraulic pipe yesterday, so for the time being you'll have to content yourselves with this single pair. More rail, and a pair of buffer stops, will come up in the next few days - the burst pipe has now been replaced. 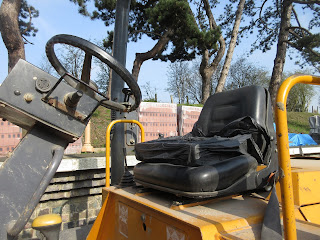 Running a dumper without any form of suspension up and down a rutted and potholed trackbed is very bouncy indeed, and all the shocks make your teeth want to fall out. One of the dumper drivers brought in a thick cushion in  a plastic bag. It seemed to do the trick for him, as he brought it back again today. 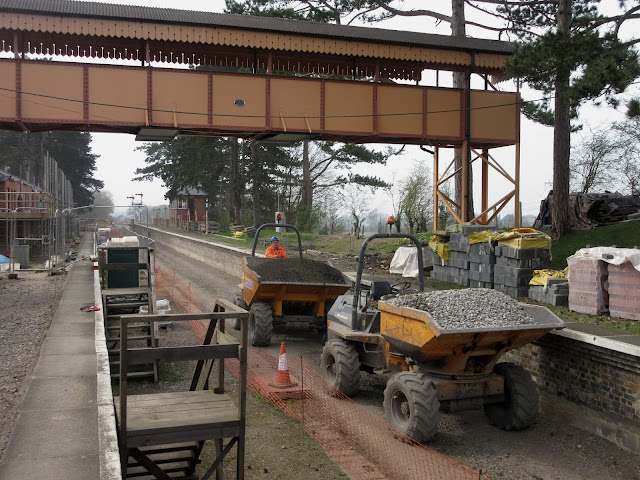 By lunch time we had dealt with the 6 loads the quarries had delivered to us (we had ordered a lot more, but you can't always get what you want - our second reference to rock music today!). Here the two dumpers are parked up by the mess hut for lunch. The second has a small supply of type 1, which we used to back fill a void that we found. 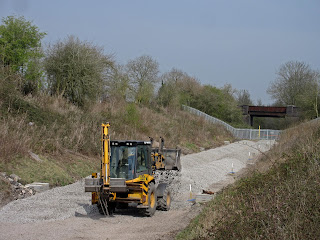 After lunch, with all ballast supplies for the day ferried in, Steve set off to level the piles dropped yesterday and today, about 280 tons in all. 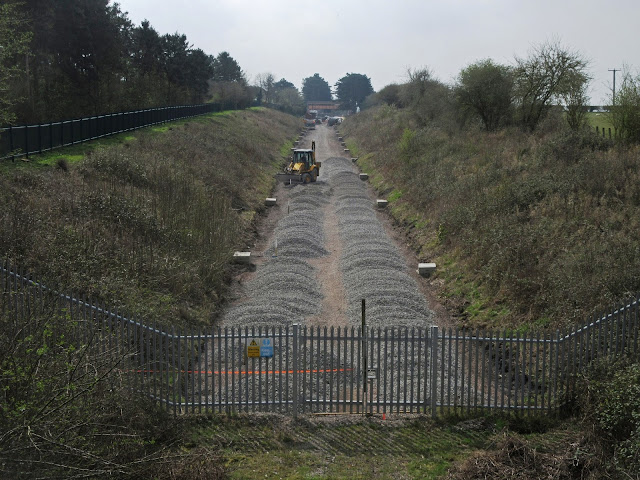 This overview, an update of the empty trackbed picture here taken a few weeks back, shows how far we got in two days. Behind the camera, Springfield Lane bridge, and the overgrown trackbed to Honeybourne. Due to the perspective it looks as if we did more than what is actually on the ground - we are really about one third of the way to our target near the platform ends. 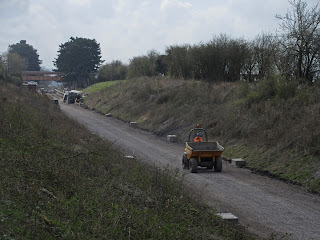 After a while, Steve requested the assistance of one dumper, to move an excess to an area of not quite enough.

If you enlarge the picture, you can see more clearly how the whole Broadway site is on a curve, between Pry Lane bridge and the camera. 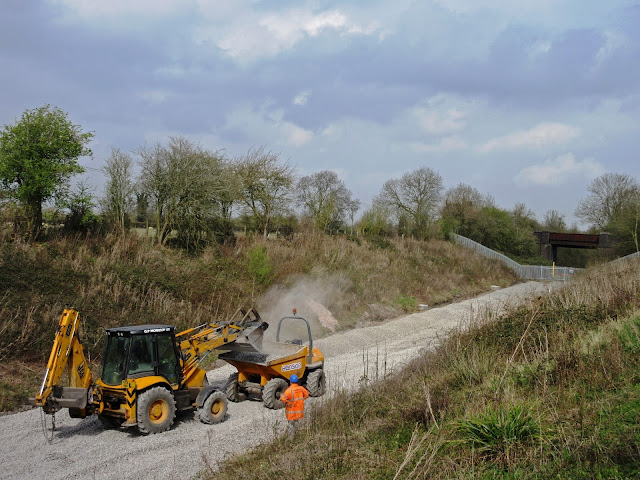 Here's the dumper being loaded with a couple of buckets of the excess, for re-dumping further along.

With all that sunshine today, we can't complain about the mud and the rain any more, but now we can complain of the DUST !