The ballast regulator ventures forth

Bob Foster's Matisa R7 ballast regulator, newly equipped with bristles for its rotating brush, was used on the Broadway extension for the first time on Wednesday. Having been inactive for quite a while, it sprang a hydraulic line during its first day back at work, but the repair with a new hose was quick and easy, and it was soon back at work again. 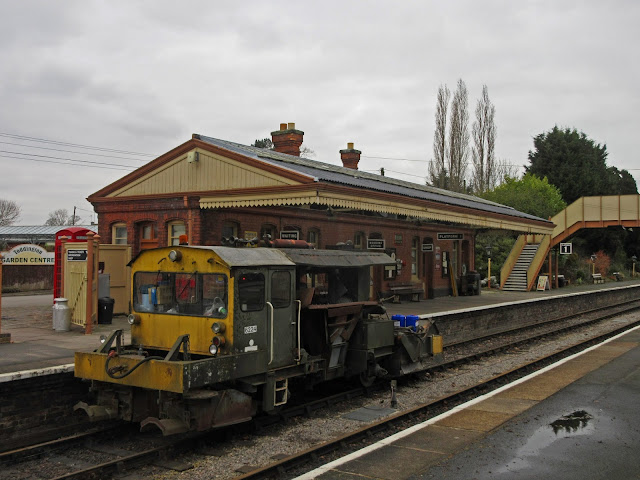 Yesterday the regulator cleared the whole of the current length of the extension up to the PWay train at Peasebrook Farm, starting from the beginning of old Laverton Loop. A second day was pencilled in for today, and at 9am the machine can be seen here at Toddington, ready to depart northwards. 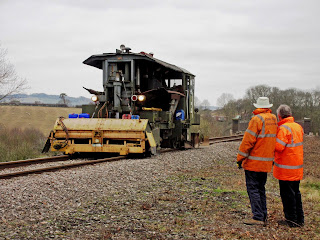 The area to be treated, if time permitted, was from Stanway viaduct to the start of the former Laverton Loop.

In this picture the regulator has just set off at Stanway, with the top of the viaduct just visible in the background. 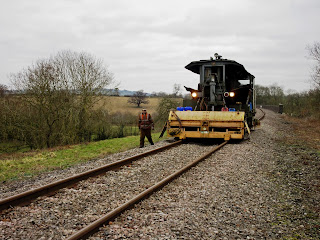 These two pictures show the track before the regulator has passed over, and after its passage.

In the first case, the sleepers are barely visible.

The speed is a slow walking pace. The box at the front, which can be raised hydraulically, contains a rotating brush and a conveyor belt, which ejects the ballast collected to the left or right as desired. 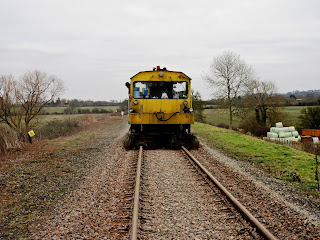 This second picture shows the track after the passage of the regulator - everything is very neat, and the fittings are visible for inspection or working on. There is now more ballast on the shoulders.

The excess ballast ejected at the front is left as a long row on the shoulder, and can be ploughed away further, as is the case here. The angle of the plough is adjustable. 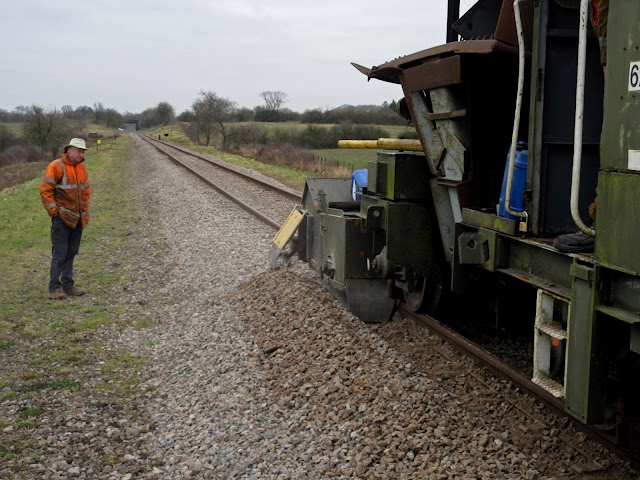 The transformation of the sleeper tops is clear in this picture, supervised by Andy of the PWay gang. The row of wet ballast being formed is caused by stone being ejected from the yellow flap at the front.

All went well for about half a mile, until Bob stopped the machine due to a blocked conveyor belt at the front end. 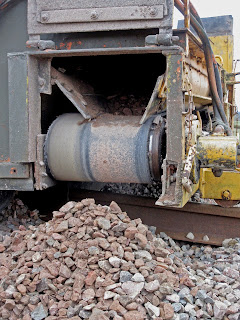 This puzzled us for quite a while. It was clear that the amount of ballast on top of the belt was abnormally high, but this alone should not block the passage of the belt.

Not having a shovel with us (tip for next time) it took some effort to clear the belt of its load. Even without the load it would not run, and eventually we traced the issue to a stone blocked underneath it, which jammed the rotation of the drum in the picture. Another tip for next time: bring a thick bent wire with you, for retrieval of said stone.

Blockage finally cleared, the machine set off again at its steady pace. 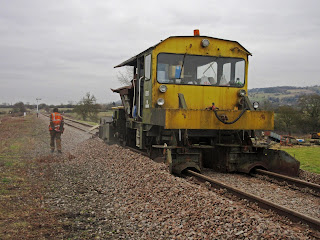 By lunch time, the regulator had tidied up the trackbed from Stanway viaduct to Stanton road, seen here right on the horizon. The rate of progress is between 1/2 mile to one mile an hour, so you can easily keep up with it by walking alongside. In fact yours truly and Andy walked up ahead to Stanton Fields bridge about a mile away, in order to gather information as to the high spots that could best be addressed in the time we had available. 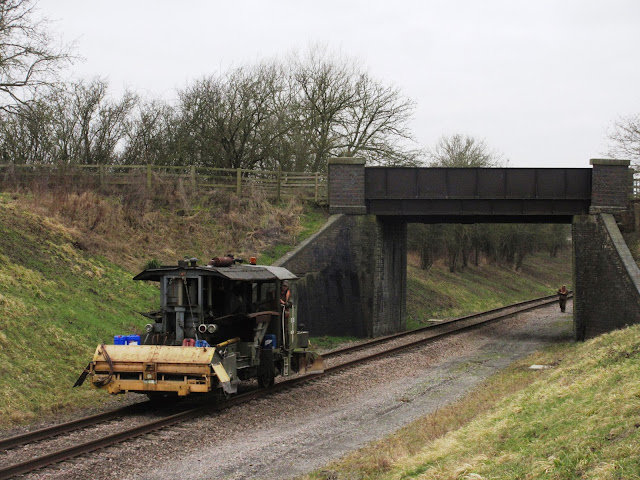 In this last picture the machine has just reached our ballast depot at Stanton, and has 'raised its skirts' in order to move on more speedily to the next site. This was to start at the aqueduct, just behind the camera.
The intention was to carry on through then to where yesterday's job started, giving a clear run all the way from the viaduct to Peasebrook Farm.

If you enjoy watching this sort of thing, you can see a video of the work here:
https://youtu.be/fouD7CQzx98