Doris took a pill and calmed down again; we continued on the Childswickham embankment on Friday. 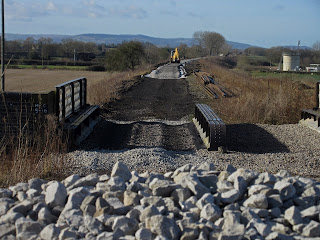 As you can see, we're actually quite close to the bridge now. Today would be a mixed day - lengthen the ballast bed until the current roll of Terram ran out, then run more loads into further away areas that need a bit more, down by Pry Lane bridge. 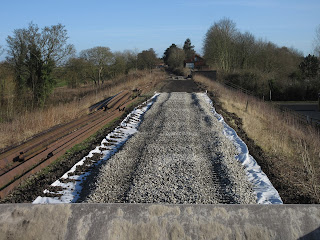 Coming back empty, this is the view from the dumper as we are about to leave the ballast bed.

On the left, the rails from Laverton, waiting to be further dragged to Broadway, northern end. 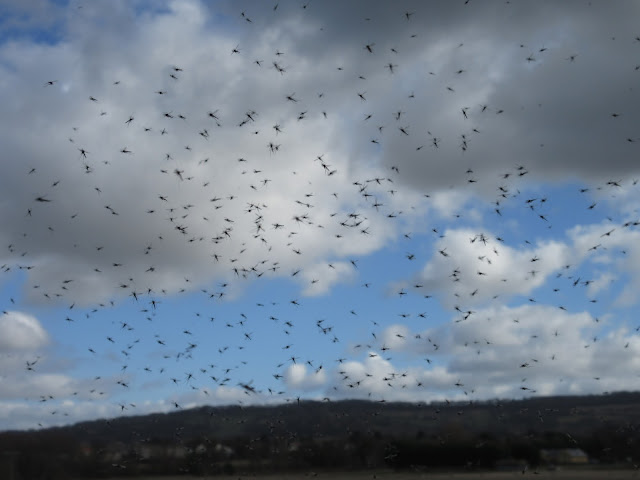 With the storm gone, an new and rather unexpected challenge presented itself - flies! There were zillions of them, all around the dumper (because it is coloured yellow? No joke, last year, they were interested in the hi-viz vest of a contractor). The only way out was to get on board through the swarm with gritted teeth, and press the pedal firmly against the metal. They can't fly that fast. 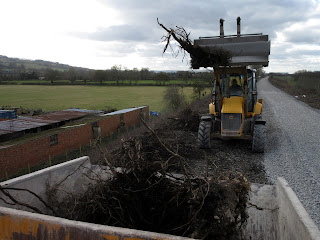 Next to adding extra ballast down by Pry Lane bridge, we also decided to clear away some tree stumps that had been put to one side during the trackbed clearance. We've got the dumper on hire for a while now, so we might as well use it as much as possible. 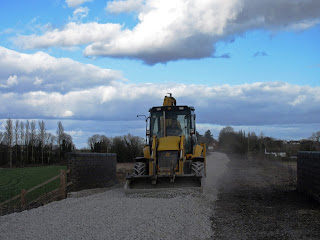 Tree stumps cleared, Steve went back to grading the area around the bridge, where we tipped 6 loads earlier the same day.

The wind's gone, but it's still dusty - see to the right of the JCB. 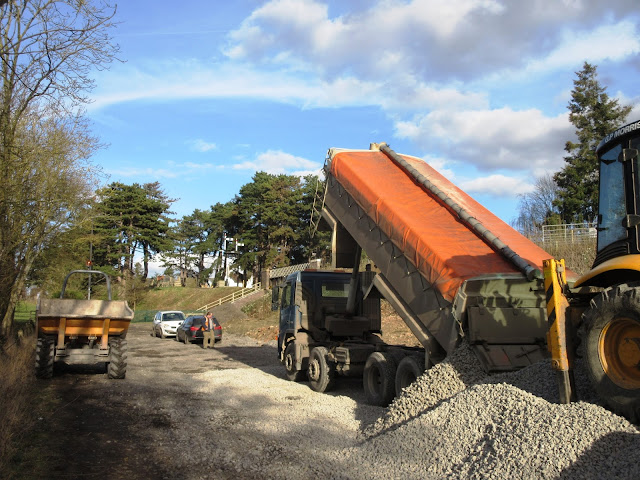 The new ballast deliveries always come very first thing in the morning, as early as 5am. So this one at 4 o'clock in the afternoon caught us a bit off guard. Got to look busy too, that's the PWay dept. head just arriving for a look-see. We ended the day 57 yards from the bridge, so everyone was happy with that.

Next week we've got a few odd jobs to sort out - it's not all about tipping ballast and laying rails - but they all involve the dumper. However, each job, whatever its nature, gets us that bit closer to our goal. We know what, but we don't know when and where yet, so will leave the description to the day we know when we kick off. Keep tuning in therefore. 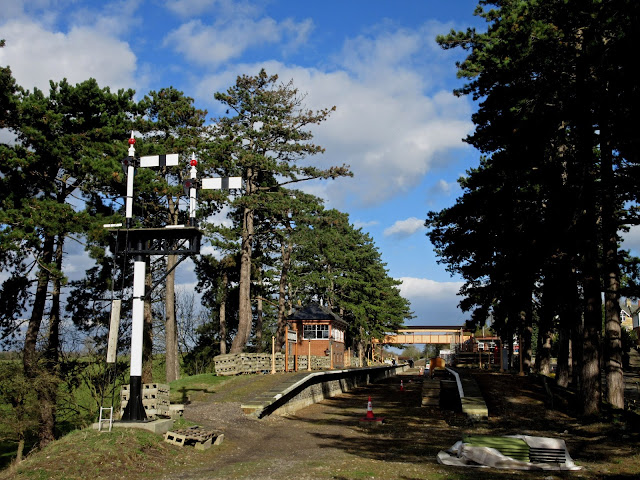 Given the fine weather on Friday, here's another 'pretty picture', taken in that half hour when the sun shines down the station trackbed.


Saturday gang.
Today, Saturday, was a normal day for the PWay Saturday gang. We split into two groups.
The largest took to further ballasting the repositioned Winchcombe turnout, something that can't be done by dropping a Dogfish on to it, and is thus very labour intensive. Individual ballast loads have to be pushed from the station foot crossing up to the turnout on a trolley, by hand, unloaded by hand, and packed by hand. It's a gruelling job.

A second, smaller gang of 3 took the Landie and the Telehandler to Skew Bridge at Gotherington, where our sleeper depot is located. There isn't much to see there, except a massive pile of concrete.

The Landie is a road-railer, so took off by rail to pick up 6 sleepers that were in the 4 foot by the Royal Oak. This was a tidying up excercise, but the sleepers themselves would prove useful at Skew Bridge. 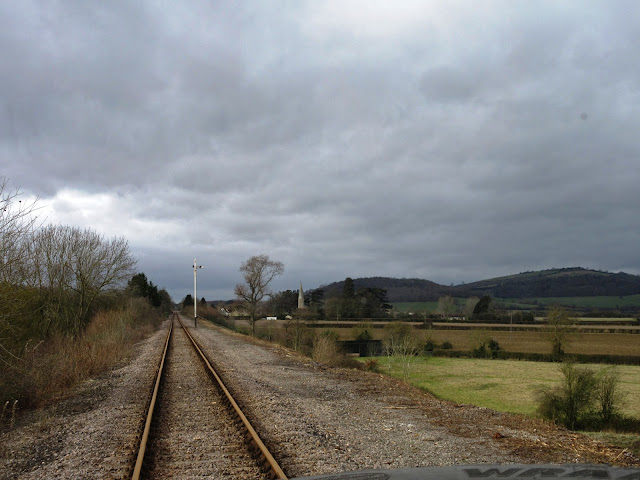 Trundling down the line, this is the view of the long straight coming out of Greet tunnel. In the distance you can see the unusual tower of Christ Church, Gretton. 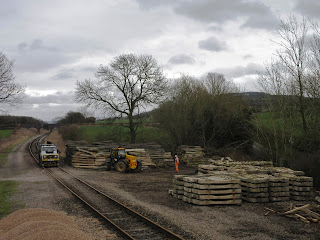 Here's the sleeper depot at Skew Bridge. The Landie has brought up the 6 wooden sleepers, while the Telehandler is sorting out sleepers from the far pile into tidy stacks in the foreground. 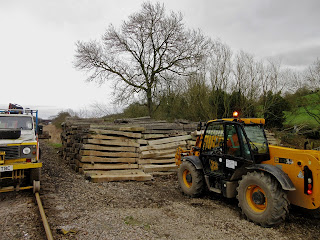 These sleepers were deposited here rather hastily many years ago, so are today in rather a jumble.

Each sleeper has to be prised out carefully and inspected for damage - we have quite a few rejects. This entire pile is due to be used on the extension to Broadway. 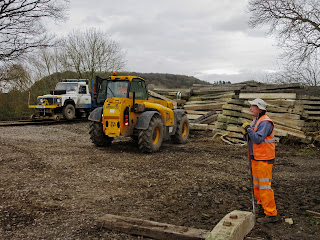 Once one or more sleepers have been carefully prised loose, they are brought to a sorting area in the foreground. Here the failures are extracted and stacked elsewhere (we can still use them to build ballast retaining walls for example) and sets of 4 good ones are then stacked in piles of 20, ready for loading on to the bogie flats. 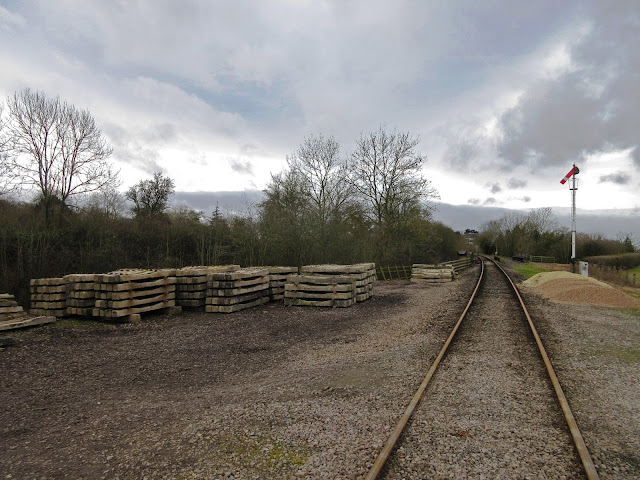 This is the 'ready' pile. Over 350 sleepers are in this stack, and a pair of bogie flats can take 320. We are now awaiting a window to bring up the empty flats, so that they can be loaded and taken out to Peasebrook.
Ideally, we would like to resume sleeper laying next Saturday, if logistics permit this. The Winchcombe relay is pretty much done from a track laying perspective, and we are now awaiting the return of the tamper, prior to the resumption of services next week already. Where does a winter maintenance season go....
Posted by Jo at 18:11