It's a fine point

Today was a big day for the gang, with the turnout to relay and perhaps the last two panels to put back in. The gang was certainly big enough - 18 of us at one point. 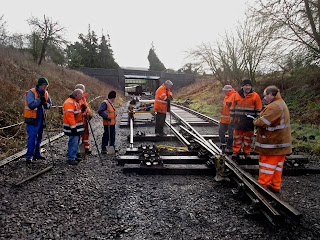 Where we left off before was with the crossing of the turnout attached to the longer loop.

The timbers in the crossing had been numbered, and those needing replacement removed. So our crossing was a bit of a skeleton, and the first job was to replace those timbers.

Here Nigel is consulting his master list of what goes where. 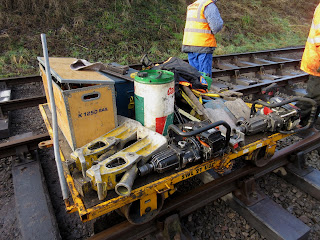 Your weapons of choice were laid on on a trolley - rail saw, two nut runners, two Jacks - go back and get two more - rail and sleeper drills. All of these were used, and more. 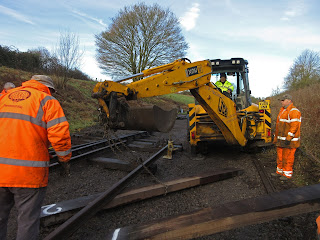 New timbers for pointwork are very heavy indeed, but luckily we do have a limited degree of mechanisation. We got Steve in the JCB to bring them, and pull/push them approximately in their places. The rest was done with bars.

Later we moved them all again one space, it's two steps forward and one step back. That's life. 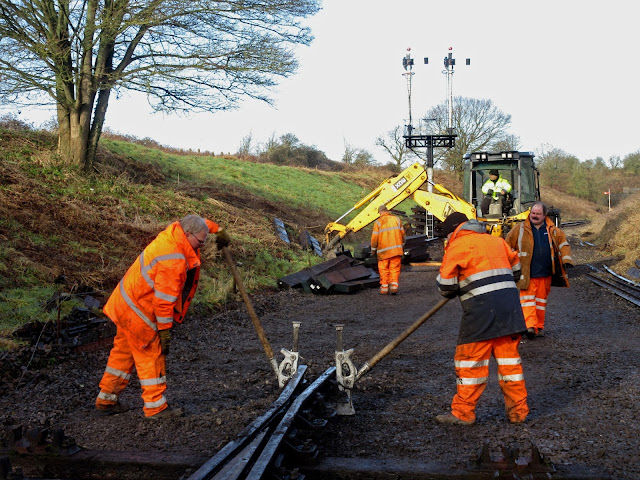 The end of the crossing had life expired timbers, so a pair of jacks was used to raise it high enough to slip the new ones underneath. All the timbers are numbered; we started with No.1 and there are 50 of them. The replacements, where necessary, are of course all different lengths and were ordered to size beforehand. The pile is in the background. 'Get me a 4.40m timber' - 'That'll be the one underneath then'. Again, the mechanical assistance of the JCB was crucial in this job. 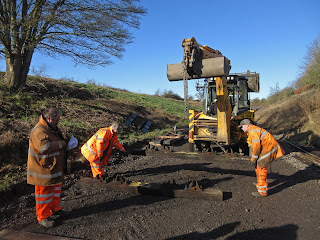 The timbers that were still good were found and retrieved in numerical order, leaving gaps for new ones.

The mastersheet holds all the information, but was getting increasingly greasier as time went on. 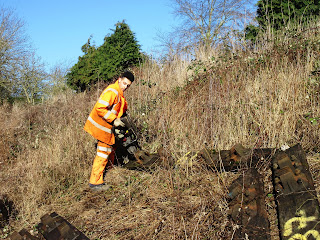 The timbers had been placed on the cutting side when the turnout was first dismantled. From here the good ones were collected and placed in their numerical position, while the life expired ones had their chairs removed by Hayden. 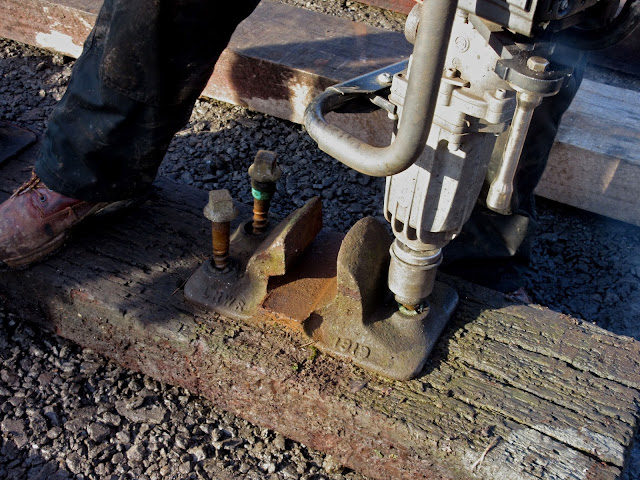 This timber was good, but the chair was not. Although it looks OK, it is of a design with a rounded side which makes placing the rail very difficult, so it was taken off once found. The inscription is interesting - LNWR  1919. The diversity of chair origins is amazing, including LMS, LMSR, BR and Southern. The only ones we don't use are - the GWR ones! This is because they have two throughbolts, instead of 3 chairscrews, the latter being much easier to fit and remove. Any throughbolters are passed on to 2807 for the production of boot scrapers. 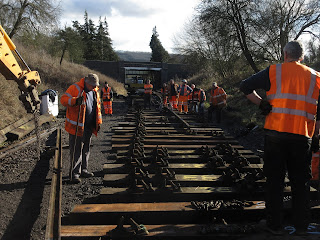 The line of timbers is getting longer and longer here, and some initial efforts are being made in lining up the chairs, ready for a rail to be dropped in. The rails, on removal, were also carefully labled for later refitting, although the abreviations chosen by the labeller could not always be recalled. 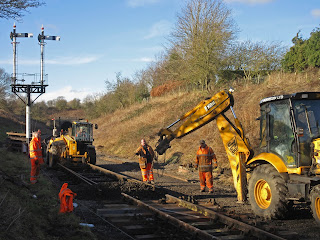 Between the crossing and the switch of the turnout are plain rails. The sleepers and chairs for these were found and fitted, so that the plain rail reaching from the crossing to the switch could be inserted.
Then came the interesting part, as the switch, parked under the bracket signal, was dragged forwards by the Telehandler and JCB. It generated a considerable 'bow wave' of ballast before it. 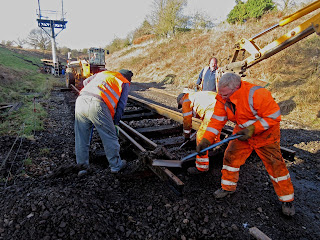 The 'bow wave' was shovelled out, and extra space generated in the old ballast for the switch to be manoeuvered into place. 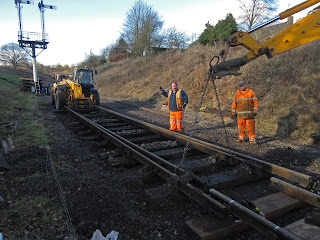 Finally the switch was lifted a few inches off the ground by the JCB, and shoved into its place by the Telehandler. At this stage the turnout is not necessarily in the right position yet, as can be seen by its proximity to the bracket signal post. 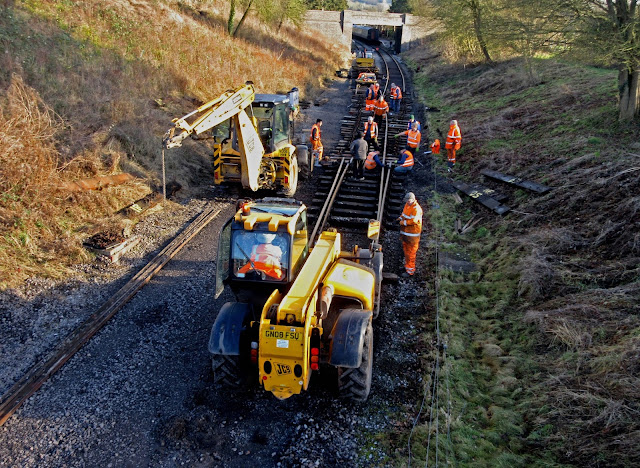 Talking of the bracket signal, this is what the placing of the switch looked like from above.
Can you see what it is yet? 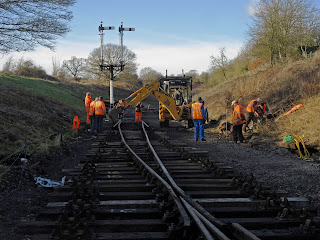 The turnout in use here is a curved one, but during reconstruction it was more or less straight (this helps to get the rails into the chairs).

In this picture you can see the process of 'tweaking' by which the JCB nudges the whole unit this way and that until a nice smooth curve is generated, and also that it points in the right direction ! 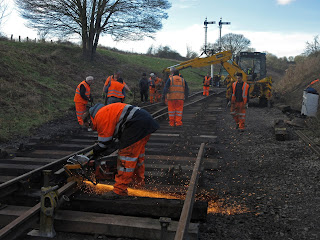 Once the position gives +/- satisfaction, the rails can be cut to length so that, in this picture, the loop can be attached to the crossing. 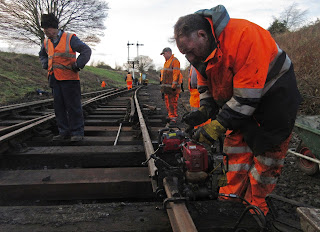 Here the same rail has been cut by Steve L, and he has now grabbed the rail drill for two holes to be cut into the end that was cut shorter. 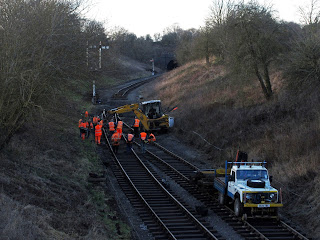 Towards the end of the day this picture from the road bridge shows the progress made today, before the light began to fail.

The turnout is fully assembled, with only some additional bolting down required. The key thing was to get as much of the JCB lifting out of the way, as there is now only one more opportunity to do this, before Steve goes on a long deserved holiday. 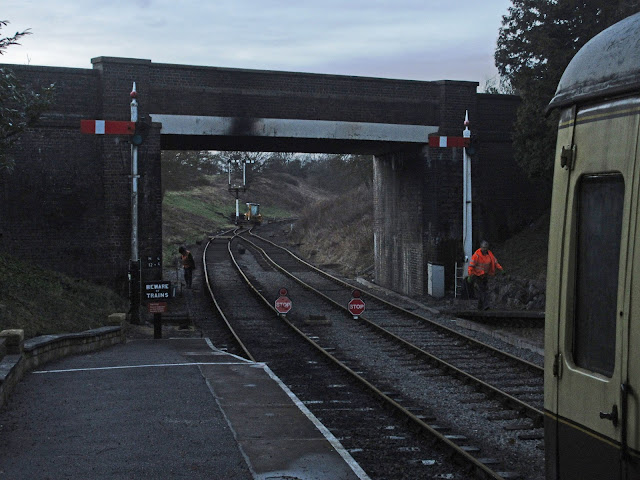 A peep under the bridge as we trudge home shows the turnout in place. A bit more final adjustment is needed, but it's all there now and the JCB is here no longer required.

On Wednesday we will then lay the final two panels in, so that everything will be connected.

Next week should also see the mended tamper at Laverton on the extension, followed by the ballast regulator a few days later. This is to clean the track of surplus ballast, so that the rails can be lifted for stressing on the first stretch.
Posted by Jo at 19:48