Lifting was the order of the day today - the sleepers, so that they could get a minimal packing underneath, ready for a first ballast train, and the rails, with lifting fishplates, to get uneven rails at the same level. The day started well enough, with a dry morning but heavy showers forecast for the afternoon. Actually, there was only one shower. It lasted from 12.30 to 4 o'clock! Ugh. 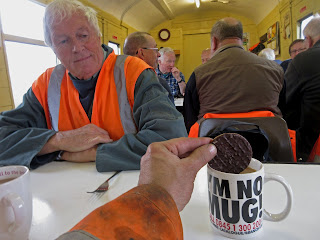 First things first, a strong cup of tea, a biscuit and a briefing. Ours was to be a bit of a catch up day, the track now being in. We split into 2 teams, one at the tunnel, the other over the turnout. 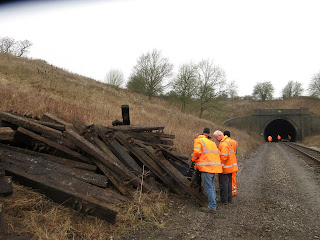 There were 3 more sleepers to be replaced in the tunnel. The first 10 yards leak quite badly, and the drips have deteriorated the sleepers immediately underneath. We investigated the pile of sleepers removed from the straight, and selected 3 good ones for transporting up to the tunnel mouth.
This big pile still needs removing back to the yard. We made a start on it, but the material is so heavy that the trolleys were overwhelmed and we did just the one. 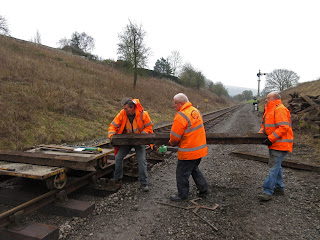 We took the heavy chairs off a good dozen of them, and carried 3 on to a double trolley that we had brought up.

It's good to see directors get their hands dirty too, can't complain here ! 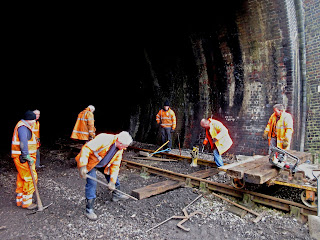 In the tunnel mouth others had dug out the first of the three rotten sleepers, and the replacement was soon slid in. This gang is very practised, it went quite quickly.. 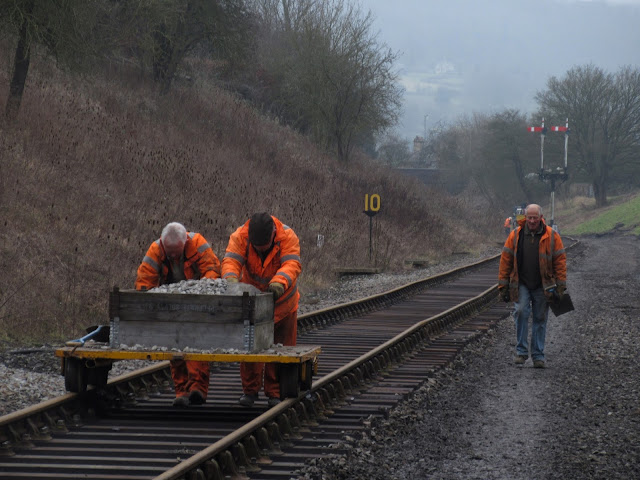 Today there was only little mechanical assistance, which was the Telehandler that loaded fresh ballast one trolley at a time. These were then pushed up the slope (yes, it's uphill through the tunnel, the summit being on the other end). 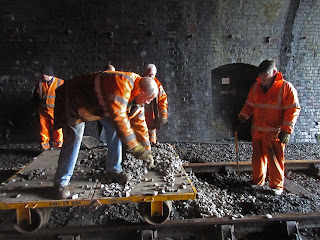 Once on site just inside the tunnel, the load was shovelled off into the gaps around the newly replaced sleepers. The stone was then packed underneath. 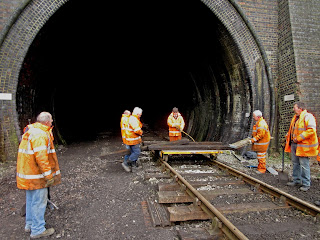 To tidy up, the rotten sleepers were loaded on to the now empty trolley and taken away.

Finally the trolley was loaded with scrap rail cut offs, and still useable chairs from the dozen sleepers we dismantled. All this went back into the yard. 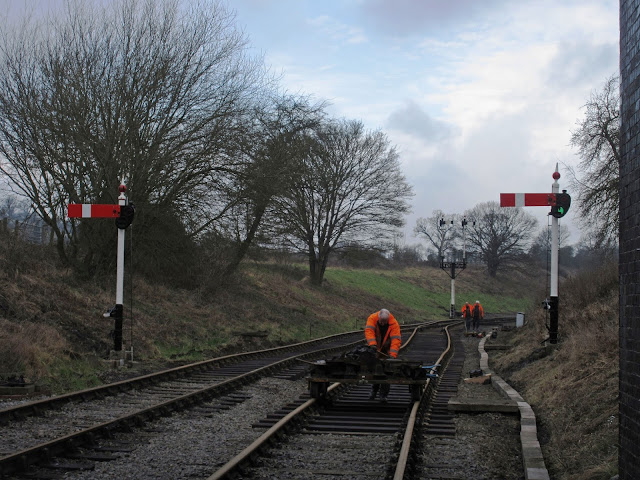 A trolley load of chairs and scrap is pushed up the newly connected loop. Check out the new signals here. These are now the starters for both platforms, marking the extent of the longer platform and loop roads made possible by our relaying exercise. S&T haven't sat still; the progress since Saturday is remarkable. It is expected that these two starters will be operational for the first train. 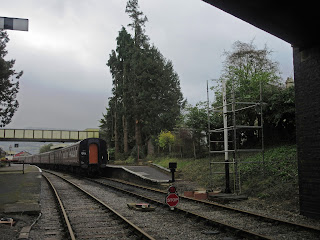 Looking the other way, we see the old starter signal on the station side of the road bridge. The scaffolding is not for taking it down, but to convert it to a repeater signal with a banner. The operation of this will be connected to the new starters, the latter being short posts so that they can be seen through the bridge. 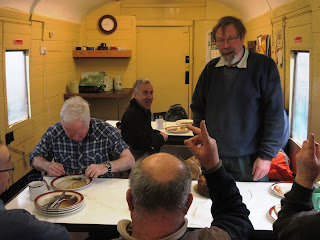 Lunchtime was a joyous occasion, as it was Dave's birthday! Mrs. Dave baked a lovely cake, which came in a very large tin. After unveiling, the question was asked, who wants cake, and a roomful of hands shot up.
The age of the cake cutter was not made public, but the absence of candles leads one to assume that their large number was thought to present a worrying fire risk.

As we returned for lunch, it started to rain. The first of the 'showers', no doubt. Just need to sit this one out, we thought. It didn't stop though. 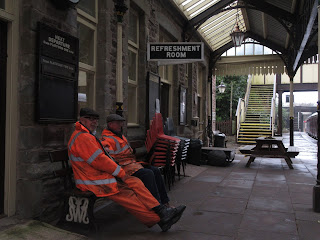 As the precipitation increased, and became quite concerning, a number paused outside the refreshment room under the canopy to wait for an abatement.

It didn't come either. 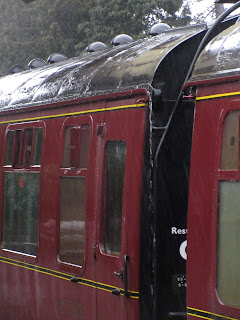 The rain drummed on the carriage roofs, large puddles appeared on the platform and water began to pour out of the gutters. The sky remained heavy and dark, with no sign of a break in the clouds. 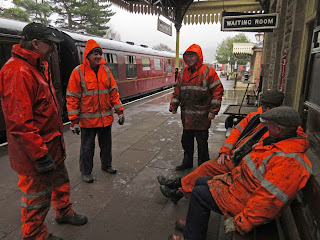 Eventually, even those who had volunteered to help with the washing up were forced to retun to work, but the bench under the canopy looked very attractive, as the rain continued to hammer down in large quantities.

John R took the opportunity to fire a series of dubious jokes at his enforced audience. There was no escape. 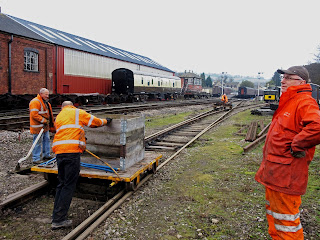 After a good 20 minute wait, we ventured out again into what turned out to be light but continuous rain.

There was a bit of a kerfuffle in the yard, as an incoming scrap train met an outgoing empty ballast working. Who had the right of way? 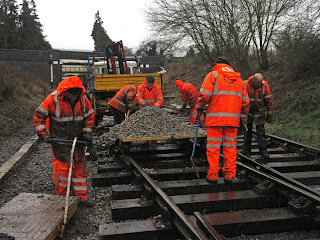 The ballast train was filled by the Telehandler on the barrow crossing, and taken to the turnout, which had a number of suspended timbers, which need to be packed securely before a real, and very much heavier ballast train could cross it.
Working down from the tunnel mouth, Lee and Andy also packed every floating sleeper, so that at the end of the day the majority of this job was secured, leaving perhaps a little more to do at the station end. 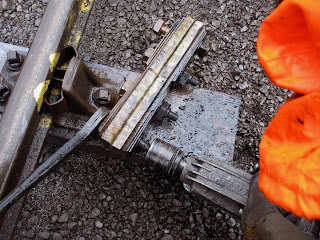 Another of our jobs was to fit so-called 'lifters' to various joints in the turnout. As we are working with second hand rail, the ends often do not match in their wear rates, leaving a step between one rail and another. This is cured by fitting a special set of fishplates, which has one end higher than the other. They come in units of 1/16th inch. Of course the one you want is still on the trolley, several yards away.

A problem for us today was the fitting of this insulated set of fishplates, which besides being insulated, also provided a lift. Very specialised.

Being so specialised, they are not often used and this example had been in the back of the GUV for so long that the nuts had rusted on solid. It took us ages to get them off, even with the use of the motorised nut runner and a plentiful and regular application of black, sticky PWay grease. Clive observed the operation of the nut runner so closely, that his face became covered in spots of grease off the spinning nuts, including a large one on his glasses, which perplexed him at first as he suddenly saw a lot less well. 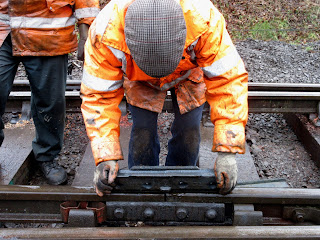 Here is Clive checking the step up required for one set of mismatched rails. Will it be 1/8th, or 3/16ths?

We have to speak in Imperial here, as that is what is marked indelibly on the back of the fishplates.

Metrication has not penetrated this far yet. 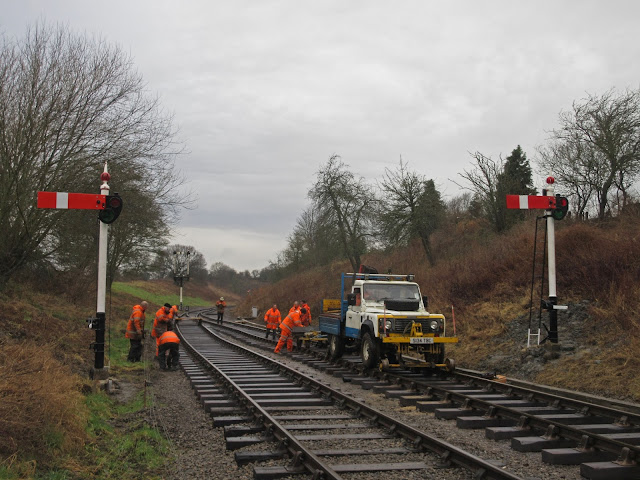 At the end of the day we had broken the back of the lifting job, although a little still remains to be done. We were all soaked, leather gloves sodden, and the 'builder's cleavages' filled with rainwater from bending over.
We loaded the tools on to the trolleys and trudged homewards, happy and satisfied that we had progressed the reactivation of this part of the line a little closer. Not long now till the first train of the season!
Posted by Jo at 18:56